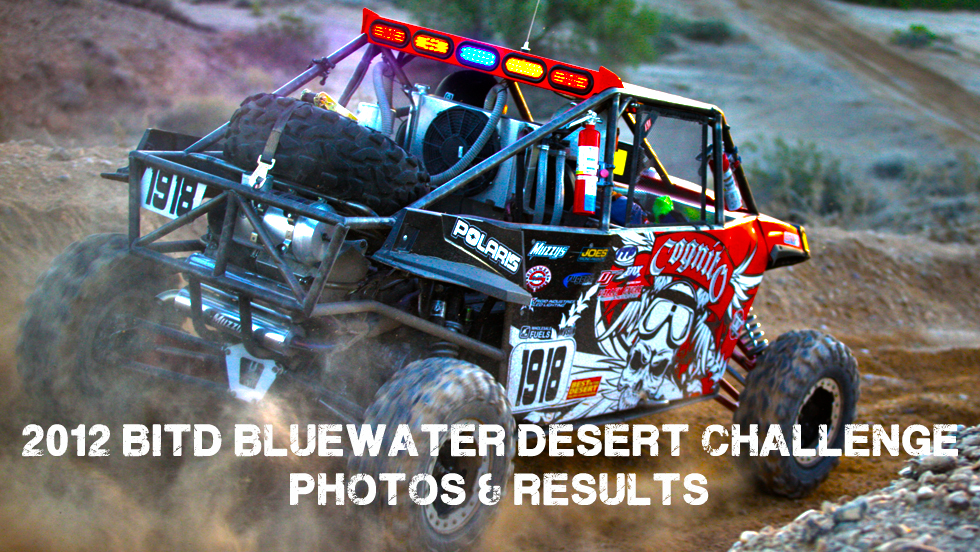 Another fantastic desert race from Best In The Desert is in the bag.  The 2012 Blue Water Desert Challenge provided UTV racers with an always fun high speed course with lots of rough and challenging terrain.  The 2 day race format requires racers and their teams to prepare carefully ensuring their machines can take the brutal abuse for 2 days of racing.  Racers would need to complete right around 75 miles each day which equated to 3 laps around the Parker, AZ desert.  The race is more of a sprint then an endurance challenge as the 3 laps goes by much quicker than expected with day 2’s course being much tougher than the previous days due to all the race traffic fromt he afternoons larger vehicles.

Day 1 saw Brandon Schueler of Jagged X in the 1919 Polaris take a dominating lead finish putting some much needed time on fellow opponents and overalling the first race by 7 minutes.  Unfortunately for Brandon the 2012 season has been filled with bad luck and while Saturdays race did not show signs of trouble Sunday’s would prove otherwise as drive belts and axles began to break on Brandon and his teammate Matt Parks in the 1932.  On Sunday both racers would be running 1 & 2 through most of lap 1 only to succumb to the bad luck that has plagued them all year.  They would both fight on for finishes with Brandon taking a 4th place overall and Parks finishing in 8th overall.

Coastal Racings Mark Holz had a reversal of sorts.  Saturday was troublesome finishing in the 6th position but on Sunday Holz in the Coastal Racing Polaris came out guns a-blazing laying down the days fastest time.  Despite crossing the line first Holz would have to settle on a 3rd place overall as his day 2 performance would not be enough to fight off the weekends big winners, Cognito Motorsports.  Justin Lamber and his Cognito Motorsports Polaris would lay down solid times both Saturday and Sunday and despite not being the first to finish either day his combined time for both races would secure him the race win by just over 3 minutes.  It was a fantastic performance by Cognito Motorsports who all year has battled to reamin in contention for a points championship but most importantly wanting to achieve that elusive Pro UTV BITD race win!  They were proof that racing conservative yet still pushing hard could be what it took to win this 2 day drag race.

Not to be overlooked was BITD Pro UTV veteran Cory Sappington in the 1904 Can-Am.  Cory, much like Lambert raced very hard yet remained reserved in just how hard they pushed.  They fell short only by a couple of minutes but it was still a solid performance put in by the hardest working guy in BITD for UTVs.  Hard work paid off for Sappington who also has battled some bad luck this year.  It was a great performance coming off of a poor race for the 1904 at Vegas To Reno.

In the sportsman class it was all Jagged X and the 1991 of Craig Scanlon and Bill Schueler.  Here is a car that was built to prove a point for Polaris at the first Parker race in January.  They had so much fun together they decided to stick out the season and compete.  Craig who is in charge of the ORV devision for Polaris travels from Minnesota every race to compete and its obvious in talking to him that this influential member of the UTV industry is now addicted to desert racing.  Its a cool story we look to tell later on but their performance this weekend in the 1991 Polaris was not only enough to win 1st in sportsman but also was enough to place 6th overall in the UTV class as a whole.  Bill drove on Sunday carrying the load for the Jagged X team.  Not only racing to win but also delivering spare parts via their race vehicle to the wounded 1919 and 1932 vehicles who were broken on course.

In closing UTVUnderground.com would like to thank once again all of the racers and teams who support us both on and off the track.  Desert racing has a special place in our hearts here at the Underground and their is no other form of racing we enjoy covering more.  Its long, hot, and dusty days make looking at these photos feel like a real accomplishment for us.  We love hiking into spots, hiding behind bushes, snapping photos, and fist pumping you guys along as you battle the elements of the desert courses.  See you all in Henderson for the season finally!  Its going to be a good one!!!

Full Results and Overall Times can be seen by CLICKING HERE