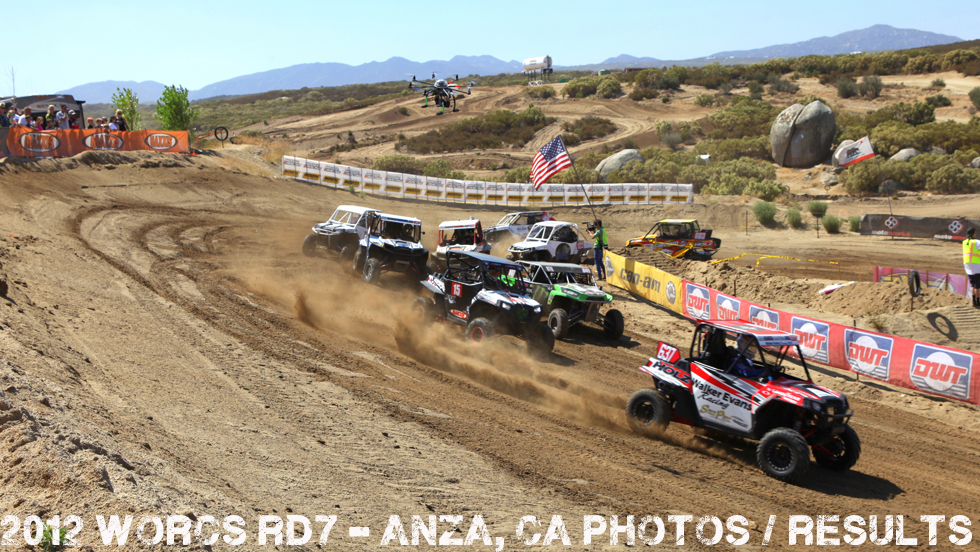 Another round has been completed at the 2012 WORCS racing series and with only one more round remaining the points battles have heated to a boiling point.  Round 7 was held at Cahuilla Creek MX park in Anza, CA.  Known for its big jumps and constant elevation changes, Cahuilla Creek is by far a favorite of the racers and spectators.  The facility allows for fans to view from multiple locations including 2 large table top jumps.  Located about 30 minutes outside of Temecula, CA the Anza race always draws a great car count and spectator crowd.  We at UTVUnderground.com always look forward to the Anza race and this year was no different.  With our friends at Mad Media in tow, video camera’s a-blazin’ and our new buddy Will Heim of Aerial PhotoWorx piloting his high dollar camera helicopter we would be sure to capture this round not only in still images as is expected, but also on video for a special project we have been working on that includes WORCS racing.

Thanks to Sean Reddish, owner of the WORCS Racing Series, racers from the Lucas Oil Off Road Racing Series (LOORRS) who also compete at WORCS would be able to pull double duty on this full weekend of racing.  LOORRS was hosting their night race rounds at Glen Helen this weekend which worried some racers including 2 who are in heated points battles at WORCS and at LOORRS.  Sean implemented a schedule change a couple weeks prior to Anza that would move the UTV races to Saturday morning which to my surprise excited everyone we spoke with. This allowed racers RJ Anderson who is competing for a championship in Production 1000 and Production 700 points leader Cody Rahders to be able to continue their battles all while still making it back to Glen Helen in time.  Same went for Production 1000 racer Todd Seaver who is the onsite announcer at LOORRS.  I know all of those guys were very thankful to WORCS for making that schedule change.

The Production 1000 green flag dropped promptly at just before 11 am and right after the Production 700 & 850 classes finished their races. As the field of Polaris XP900’s, Arctic Cat Wildcat’s, Kawasaki Teryx’s, and Can-Am Commander’s roared to life it would be RJ Anderson in his Walker Evans Racing / Holz Racing Products / Polaris XP900 who would take the hole shot and never look back.  RJ would separate from the pack and his #1 competitor Ryan Piplic, tearing off the fastest lap of the race and finishing almost a full minute ahead of the 2nd place Piplic.  The 45 minute race was not as clean of a run for many others.  Out of the 33 cars that would line up, only 24 would complete enough laps to qualify for a finish while the other 9 cars would be dealt DNF’s and DNS’s. The XP900 of .50 Caliber racing wouldn’t even make it to turn one in due to a start line collision that would wound a front suspension component forcing that racer to pull off immediately.  As RJ Anderson checked out the real battles were waged by the others racing in the top 10.  Crowd Favorite Beau Baron drove his TurnKey UTV / Polaris XP900 like a man on a mission, passing cars as if they were standing still trying to put pressure on Piplic which he was able to do late in the race.  However Piplic remained strong keeping Baron at bay and delivering Baron a 3rd place finish.  The 6 car team of Rockstar Energy / Blingstar / Polaris would make their WORCS racing debut bringing 4 of their 6 clean new Polaris XP900 race cars.  Unfortunately the 2 Merrell brothers racing would not make it more than a lap in their own cars while Bryan Carr in the #913 would take a respectable 11th place and Clint Roberts in the #217 would finish 16th. Look for this team to be back in action at WORCS as they look to redeem themselves after their first time racing at WORCS.

With RJ Anderson getting the win and Ryan Piplic holding strong in 2nd it makes the final round of racing in September that much more exciting.  The 2 will enter the race tied for the points lead bringing the Championship down to the final race! Knowing the battle these 2 have waged all year it could come down to the final lap. Either way its sure to be exciting and fans couldn’t ask for a more exciting battle down the stretch.  Not to be counted out is 3rd in points Beau Baron who is sitting only 6 points behind Anderson & Piplic.  Baron is still very much in contention and with a little bit of luck he could be your 2012 WORCS SXS Production 1000 Champion.  Championships at WORCS is familiar ground for Baron who continues to dominate the premier pro quad class at WORCS.  Winning a SXS championship would only add to an already outstanding career at the WORCS series.

The Production 700 & 850 races kicked off at 9:45am and got the crowd pumped up with their land rush starts and turn 1 hole-shot battles.  It would be Cognito Motorsports very own Justin Lambert who despite being plagued by a season of bad luck and mechanical failures would take the front row hole-shot and lead the Production 850 class from flag to flag in dominating fashion.  It was clear to see that his Cognito Motorsports / Kawasaki Teryx WAS the car to beat in Anza.  Lambert would power his Teryx around the track and it was great to see this guy, who is always working so hard on his and others race programs finally get the win he deserved.  Finishing not far behind Lambert would be the Polaris RZR of Ken Benson who constantly got quicker as the race went on. Never did he seem to let up, he continued to push hard to try and run the very fast Teryx of Lambert down late into the race.  Despite the hard charging and usually dominating David Lytle pressing hard to advance from a solid 3rd position to 2nd, Benson held strong and put his Polaris on the podium.  Lytle however had nothing to be disappointed about.  His 3rd place finish gave him the points he needed to secure the Production 850 class championship putting his Kawasaki Teryx atop the class as they head into the final round.  Lytle said himself that RD8 will be just for fun as he already has been awarded the WORCS Season Championship in Production 850.  It was an awesome performance this year for Lytle and we look forward to watching him defend his title in 2013, hopefully still running those big UTVUnderground.com stickers!!

Production 700 has been a really exciting and fun class to watch this year.  The points lead has passed through the hands of 3 different competitors in Luke Rogers, Michael Hinckley and Cody Rahders and it will be those 3 racers who remain in the top 3 in points after RD7.  The landrush hole-shot would once again belong to Cody Rahders piloting the UTVUnderground.com / Cognito Motorsports / Polaris RZR 570.  Rahders was the first to enter the series with this new platform from Polaris, with UTVUnderground.com providing the machine and Cognito Motorsports transforming it into the Production 700 racer it has been proven as not only a worthy competitor but quite possibly championship caliber. Being only passed once early in lap one Rahders would regain the lead and never look back.  Checking out Rahders would battle to become the 4th vehicle PHYSICALLY on course during the Production 850 / 700 race and would easily win the Production 700 class. Finishing second would be hard charger Kayla Smith in her Alba tuned Yamaha Rhino, while early season championship favorite Luke Rogers would round out the podium.  Rogers who experienced a ton of early season success seemed to have everything going his way until RD5 where he would be dealt a DNF.  From there it has been a battle for Rogers but this Podium finish proved that their is no quit in that Magnum Offroad / Yamaha Rhino.  Heading into round 8 Cody Rahders will enter the race with an 8 point lead over 2nd in points Luke Rogers.  The battle that was once thought to be gone only a couple of rounds ago is now back and the pressure is on both drivers and their machines to perform.  Knowing both racers and their teams, you can bet this will be a battle that will come down to the final lap and we wish them both well!