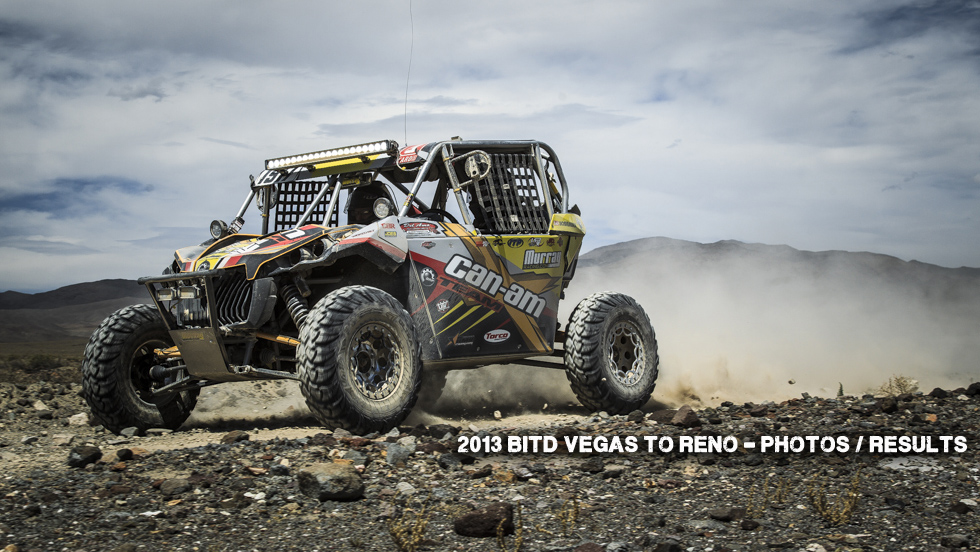 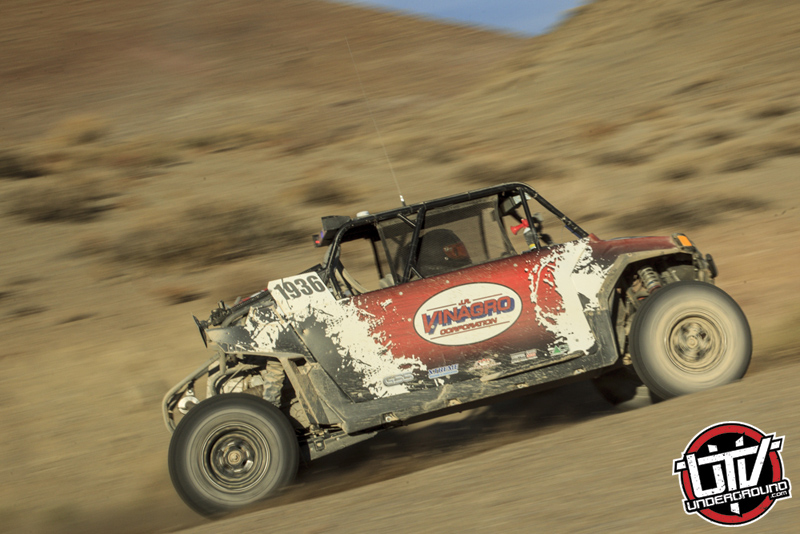 Another amazing Best In The Desert (BITD) event is in the bag. The 2013 Vegas-To-Reno saw over 20 UTV’s stage on Friday morning to take on the 543 mile race. Out of the 20+ entries only 13 would complete the grueling course in time to be considered official / un-official finishers. In the end it would be the #1917 Can-Am Maverick of Jason & Derek Murray who would take home the #1 award with the Polaris RZR’s of Justin Lambert (1918 Cognito Motorsports) and Craig Scanlon (1931 Jagged-X) rounding out the Pro UTV podium. Chris Edwards in the 1986 Polaris RZR would take home a 1st place finish (11th Overall) in the Sportsman UTV class and the 1980 SR1 of Brad Greigo would win the SR1 class.

This race was one of the most exciting Vegas-To-Reno races we have ever chased. The lead was exchanged many times throughout the day and held by at least 4 different UTV’s. In addition we saw at least 5 new UTV’s lined up for this extremely long race. The class continues to grow and BITD continues to field the premier line-up of UTV’s in desert racing. 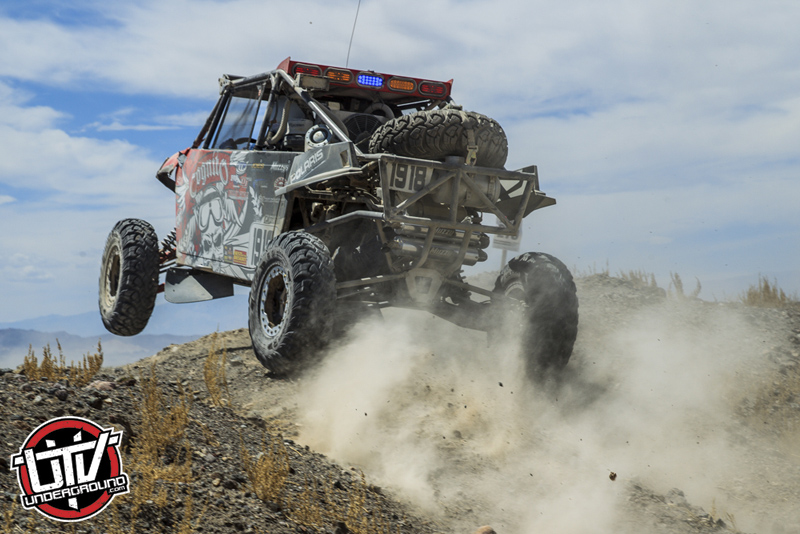 When the green flag dropped the 1917 of Murray Motorsports would lead the large pack of UTV’s into the early morning sunrise. Setting a steady pace their CAN-AM Maverick was the first of many UTV’s to begin to kick up a brutal amount of lingering dust. The 1917 would lead UTV’s through the halfway point of the race until the 1934 of Coastal Racing could finally find a way around. The 1934 RZR driven by the team of William Yokely, Scott Kiger and Mark Holz would battle from the mid pack to the front and by pit 6 (RM219) would be leading the UTV’s as they worked their way to the finish. Not to be overlooked was the 1918 of Cognito Motorsports. Cognito much like the previous 3 BITD races this year would make their way to the front and would begin to play a vicious game of leap frog with Coastal Racing and Murray Motorsports through pits 7,8,9,10 and 11. Soon after Pit 11 (RM406) UTV’s would see Coastal Racing take the lead and with Mark Holz now behind the wheel, set a blistering pace. At one point the Coastal RZR had a solid 15 mile lead over the next nearest competitor. It was looking like another win was in the bag for Coastal Racing but then the unexpected. At RM477, less than 100 miles to go and with a huge lead the 1934 RZR would suffer a mechanical. The factory transmission would succumb to the long and brutal BITD race course leaving the 1934 Coastal Racing machine stuck and helpless on the side of the racecourse. It took almost 20 minutes before the 1917 of Murray Motorsports would pass the wounded RZR but once they did they never looked back. The 1917 Maverick pushed hard to remain the ONLY UTV in front of the Unlimited 4 wheel vehicles who shot off the start line a whole 3 hours after the last UTV left the line. This is only the second time a UTV has finished in front of the unlimited vehicles, the first ironically was Coastal Racing last year in 2012. 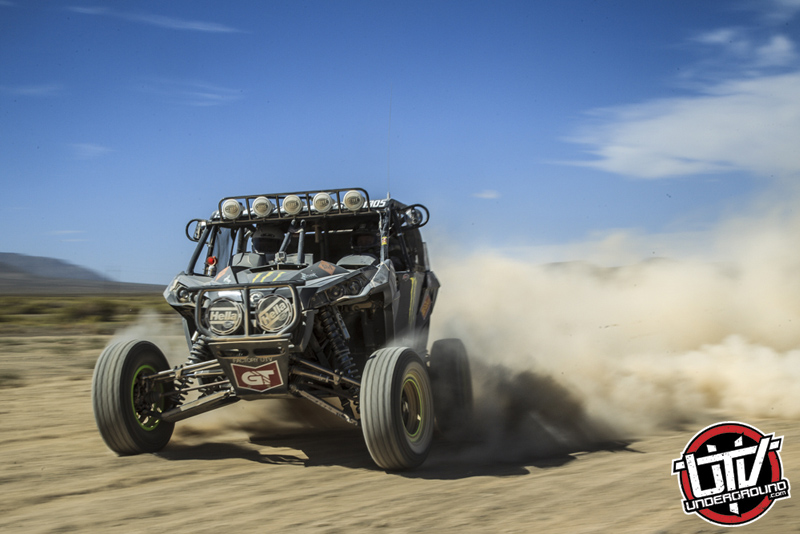 The Murray’s would finish the 543 mile race in 12hrs 5min. Coming in behind them with a finish time of 12hrs 28min was the 1918 Cognito Motorsports RZR and in a time of 12hrs 49min was the 1931 Jagged-X RZR of Craig Scanlon. To see these 3 guys pull into the finish line before dark was an extreme joy for us at UTVUnderground.com covering the race. Even though we aren’t in the race perse, we still feel the ups and downs that so many of these guys go through as we chase them mile by mile through the course. We see their struggles, we see their dedication and teamwork and most of all we see their commitment and will to win! While the podium finishers tend to get the most attention we want to make it clear that we respect fully all who take on a race of this magnitude. Coastal Racing would find a way to get their transmission replaced and get back on course to finish the race in 18hrs 11min. The John Deere RSX850i of Scott Martinez would also overcome a shortage of teammates and their own mechanical struggles to get his machine across the line in 21hrs 5min. Finishing in a total of 26hrs and 34min was the 1947 Brightside Racing RZR, despite being the last UTV to finish they certainly were not least. This team went through multiple flat tires, blown belts, broken clutches and other mechanical failures to push on through in just over a full days time. That is what desert racing is all about! Sure we all want a trophy but whats cool about desert racing is you don’t need to get to the podium to recieve the glory. Desert racing is as much about finishing as it is about winning and with that we congratulate all of you who finished this race! 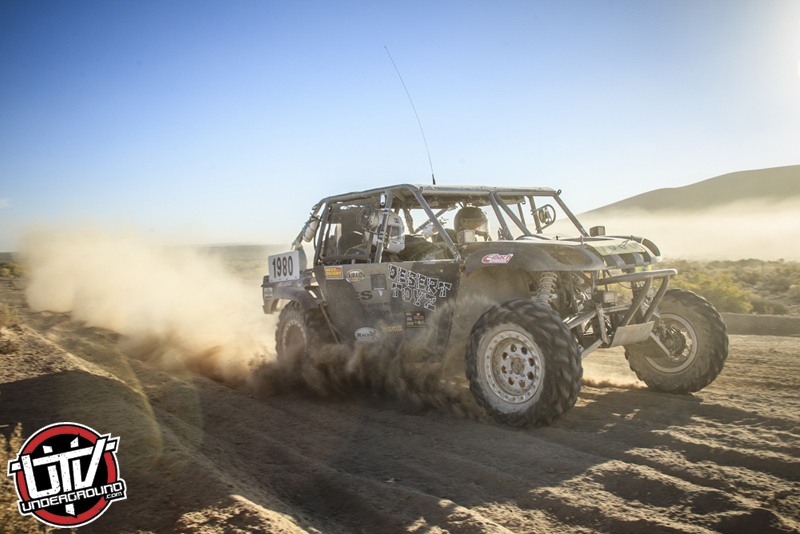 As is always the case UTVUnderground.com wants to thank each and every single race team who lined up representing the underground! We love seeing our stickers and colors on your cars and team shirts. It makes all our own hard work and efforts well worth it! Thank you to all of you!!! 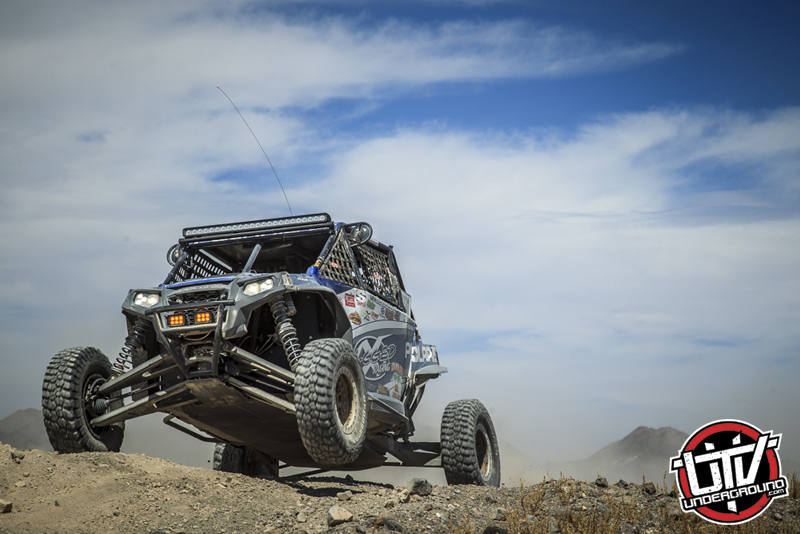