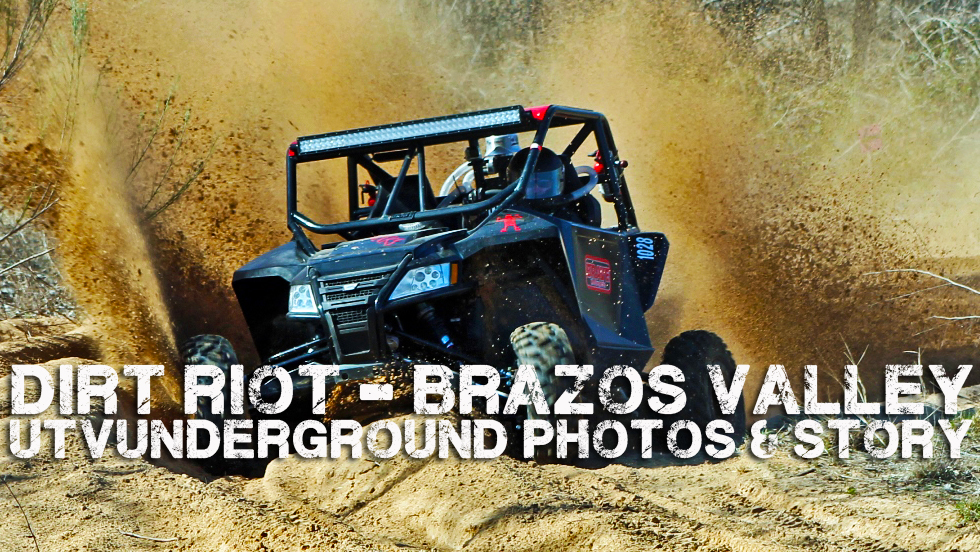 A healthy dose of perfect Texas weather greeted racing teams for the Dirt Riot Central Series race March 1 – 2 in Bryan, Texas. The race entries included 16 UTV teams from all over the Midwest. Three-hundred acres of abandoned gravel mines at Brazos Valley Off-Road Ranch made for an outstanding venue to host one of the 2013 season’s first desert endurance races in the Lone Star state.

Saturday’s UTV race lasted one hour, with the top teams completing seven laps. Dirt Riot’s competition rules are simple – after an hour, whoever crosses the finish line with the most laps wins. Wesley Gryner from Alma Arkansas placed first, including a fastest lap of 8:46. Brian Shirley (who is usually driving an Ultra4 buggy) placed second. Terrell Gauny from Cherokee, Texas placed third.

BJ Kohllepel drove the number 1028 Arctic Cat sponsored by Brave Motorsports. “This was my first Dirt Riot race – I liked the course a lot; the terrain is exactly what we enjoy riding. It was a mix of high speed along with some technical stuff to slow you down. My Wildcat did wonderful at first, we qualified 2nd in a big field of great drivers, but in the end the belt blew and we did not have enough time to fix it. I’m just thankful my co-driver stuck to our plan and kept me from over-driving my rig even if we are getting passed!”

In 2011, the Dirt Riot Endurance Racing series began with three events in the mid-South. All of the events were hailed a great success so 2012 saw a rapid expansion with five separate series of three events. In 2013 the league will host four series, Central, Mountain, Southwest and Southeast. “Dirt Riot Endurance Racing is a grassroots effort to put more drivers behind the wheel,” explains Rich Klein, President and founder of W.E. Rock Events. “Courses are diverse and give the racers the opportunity to try new things and gain more seat time. Our long-range view includes continued operations on a national level, while helping to expand the sport through creating regional and local event series.”

The Brazos Valley Off-Road Ranch typically sees club members coming out in Jeeps and 4x4s for weekend wheeling. This was their first opportunity to host racing teams from all over the Midwest and provide an exciting race venue for UTV enthusiasts. The landscape includes dramatic variations between the old mining pits and large hills, similar to the Badlands of South Dakota. Adjacent to the five acres of RV parking and pits stands a WW I era club house, providing basic facilities and a great view of the start/finish line.

BJ Kohllepel had some stiff competition from Polaris driver Tim Jackson from Sealy, Texas. “This was my second UTV race – the first was at King of the Canyons in Fredericksburg, Texas. I find that the RZR handles better when I drive by myself, so I went solo. I took it fairly easy on the track, of course turning it up a bit when I saw some dust from other competitors up front in order to get past them.”

“The atmosphere in the pits at these events is just like hanging out with family, with some friendly trash-talking mixed in. I plan to race anywhere I can this year, as long as my work doesn’t have me offshore. BJ Kohllepel is a good friend of mine and we always have some RZR vs Wildcat debates in good fun. I like to thank Arctic Cat for building a product that destroys belts and allows RZR drivers like me to finish closer to the front of the pack!”

Dirt Riot’s next UTV race is March 17 in Congress, Arizona and then in Moab, Utah at Area BFE on March 30th as part of the Easter Jeep Safari week’s events. They are also excited to include a UTV ONLY event in Moab, Utah at Area BFE May 18th as part of the Rally on the Rocks UTV week’s events.  Check out www.werocklive.com for the full schedule. Other leagues that offer UTV racing divisions in Texas include BRT – Baja Racing of Texas. Events at their 16,000-acre race facility north of Amarillo will be held July 18 to 21 and August 29 to September 1. Find out more at www.bajaracingtexas.com.

The UTV industry continues to experience explosive growth in the United States, and racing leagues like Dirt Riot and BRT are growing exponentially along with it. Industry analysts point to ongoing decline in ATV sales, with as much as 10 percent of annual ATV sales lost to UTV drivers in recent years. Retail sales of UTVs in the U.S. and Canada achieved a record level in 2011, and the trend is expected to continue with sales in North America predicted to climb another 12 to 15 percent, according to research developed by Power Products Marketing (PPM).

Whether you’re hitting the dunes with family and friends or desert racing with Dirt Riot, rest assured you’ll have a blast getting out in your UTV and kicking up some dust. See you in the desert!