Home All Stories News 2013 King Of The Hammers 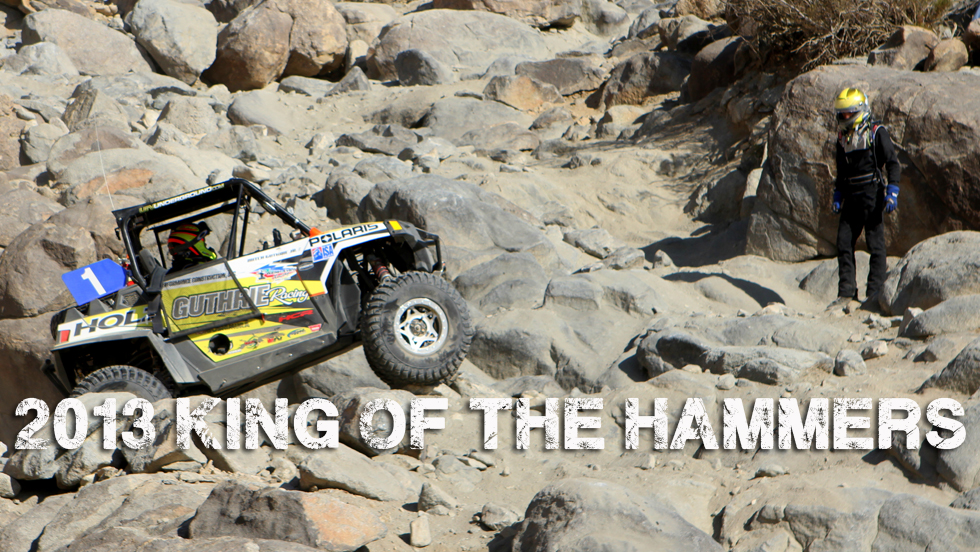 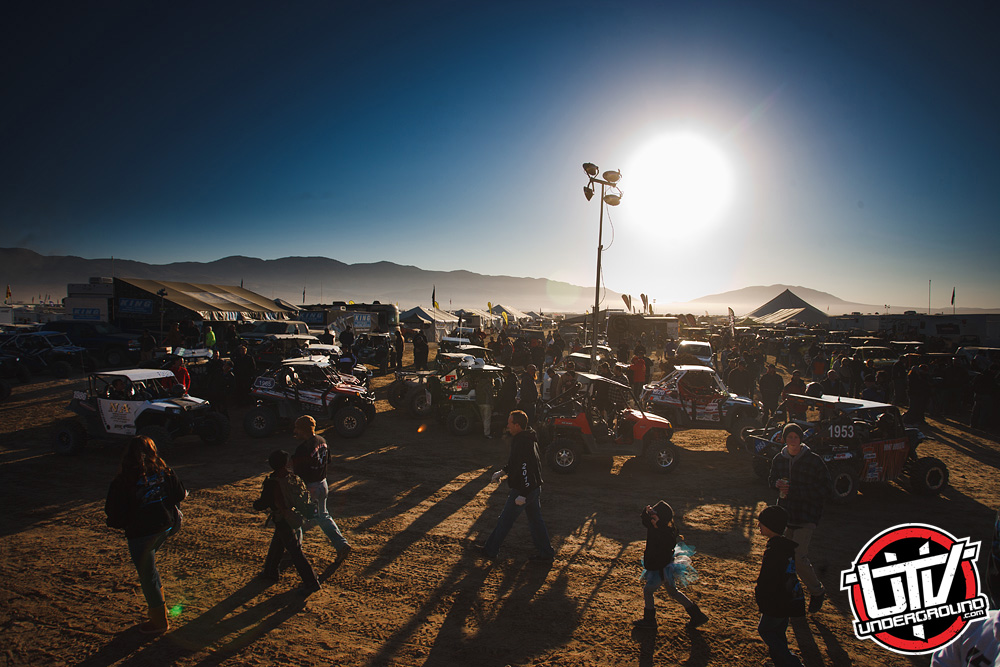 The King Of The Hammers, known as the toughest race in off-road has once again come and gone. For 5 years UTV’s have been invited to compete at this coveted event and now for four of them we have seen the same winner take home the coveted title as King Of The Hammers for the UTV division. Mitch Guthrie and his son Mitch Guthrie Jr. would take on what would be the toughest hammers race yet and would come away winners brining home the trophy simply known as REX for the 4th time!

The race is as challenging and difficult a race as any in the world. With that said, Dave Cole who is charge of the King Of The Hammers event felt that it just wasn’t difficult enough for the UTV’s and felt that it was time that they show exactly what they are made of. Either step it up he said or their done, and not only did the UTV’s step it up, they proved to many that they are not to be taken lightly.  Cole laid out a 115 mile course that would take UTV’s through some of the gnarliest desert and rock sections that the Johnson Valley OHV area known as “The Hammers” had to offer. This course would not only be the toughest course ever laid out for UTV’s at the King Of The Hammers race, it would also be the toughest course EVER for UTV’s in any desert or rock race. Cole said in the drivers meeting held the night before the race that the race was so difficult that he would offer up a free entry to the BIG Ultra 4 KOH race to the winner of the UTV race to compete in 2014, and that if only 3 UTV’s finished then he knew the course was made just right! Well guess what? Only 3 UTV’s finished out of the 35 who entered! 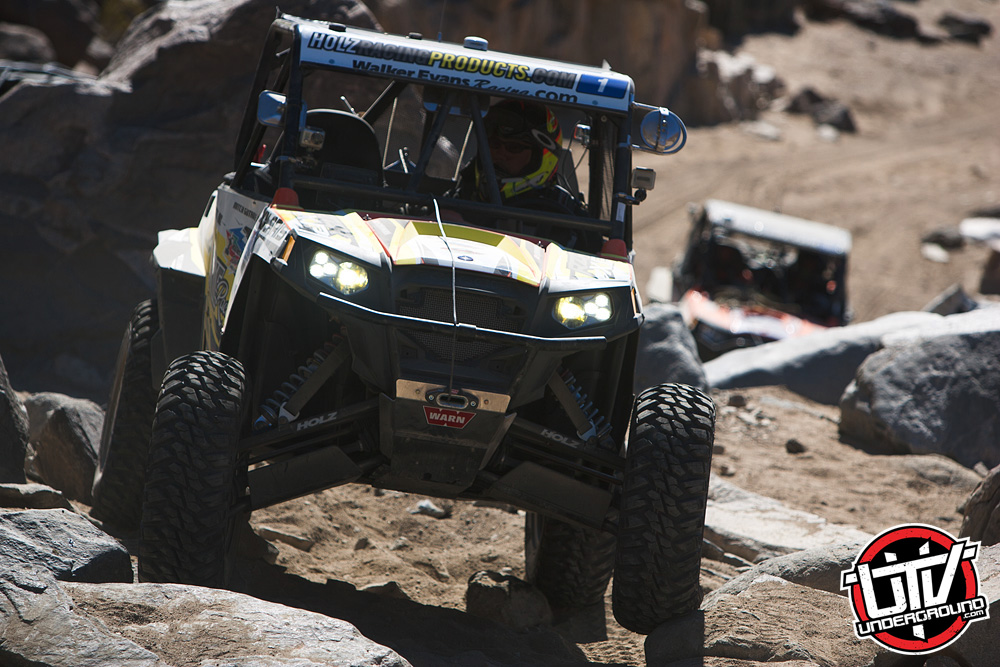 UTV’s would leave the line promptly at 9am on Thursday morning. The would take off 2 by 2 creating a drag race for the single line heading into the desert. Every 30 seconds a pair would dart off the line and head into the dust of the racer before them. It wouldn’t be long before the leaders of the UTV race would begin to catch the Every Man Challenge racers who left an hour before them. The EMC race is held every year as part of the KOH event and hosts Jeeps and other types of large 4×4 vehicles. This added another challenge to the UTV racers who have to contend with the slower EMC vehicles on course.

The UTV’s had 8 hours to complete the 115 mile course, having the EMC vehicles in front of them in the rock sections did not help their chances but then again, this is King Of The Hammers and challenge is the name of the game. By RM48 Brandon Sims was in the lead and made it to the first major obstacle of the race dubbed the “sand hill”. While sims had the lead in his XP900 it was apparent that his driving had taken a toll on his machine as he arrived with a damage rear axle. Soon other UTV’s would begin to arrive and stage as they each took their shot at the sand hill. This section would be the beginning of the race for guys like Guthrie, Crowley and Hunt but would also be the end of the line for others whose machines were not up for the task at hand. 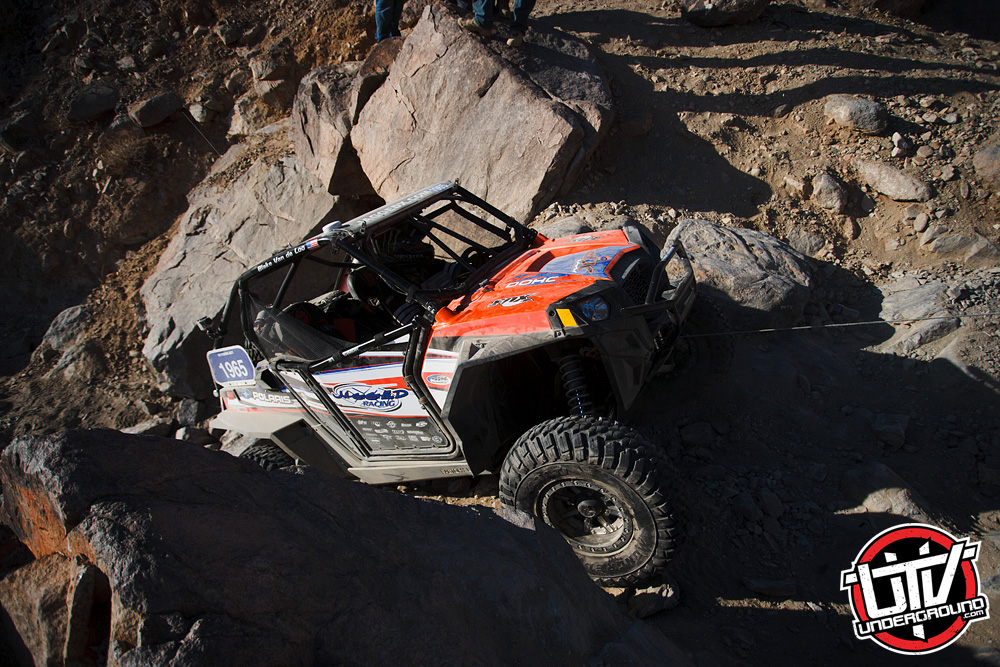 From there it would be a battle for KOH supremacy. The lead would shift many times as racers would compete in the rock sections passing EMC vehicles and one another for the next 8 hours. Currie would have the lead through Aftershock but by the time the racers would hit the fan favorite Chocolate Thunder trail Mitch Guthrie would be holding onto a good 20-30min lead. Crowley would wheel into the gate keeper at Chocolate Thunder in second and would make quick work of it. He would  pass an EMC Jeep much to the crowds pleasure and like Guthrie and then Matt Enochs behind him prove to all that were watching that UTV’s were the real deal! From Choclate Thunder, to Elvis, and then all the way to the finish Guthrie, Crowley and Hunt would battle it out!

The sun would begin to drop and as time began to run out those of us waiting at the finish would begin to wonder if any would finish on time. With less than 10 minutes remaining on the clock the sound of a high strung Polaris RZR could be heard. Then dust, then the gleam of headlights as Mitch Guthrie Jr. came flying over KING Hill and down to the finish line finishing the race in 7 hours – 51 minutes – 52 seconds! Before Guthrie could even remove his helmet the sound of another RZR coming in hot was heard and there it was, Jon Crowley in his RZR XP would appear and come through the finish. Both machines would make their way onto the stage in front of the waiting crowd at Hammertown unsure of whether Guthrie had won or had Corley actually beat him on time? As they sat anxiously waiting Matt Enochs in the Team Nasty RZR would also finish with only about 5 minutes left! It would be then that Dave Cole would grab the microphone and make the annoucement that Mitch Guthrie would in fact be the winner of the 2013 King Of The Hammers UTV race but by only 16 seconds!!!! 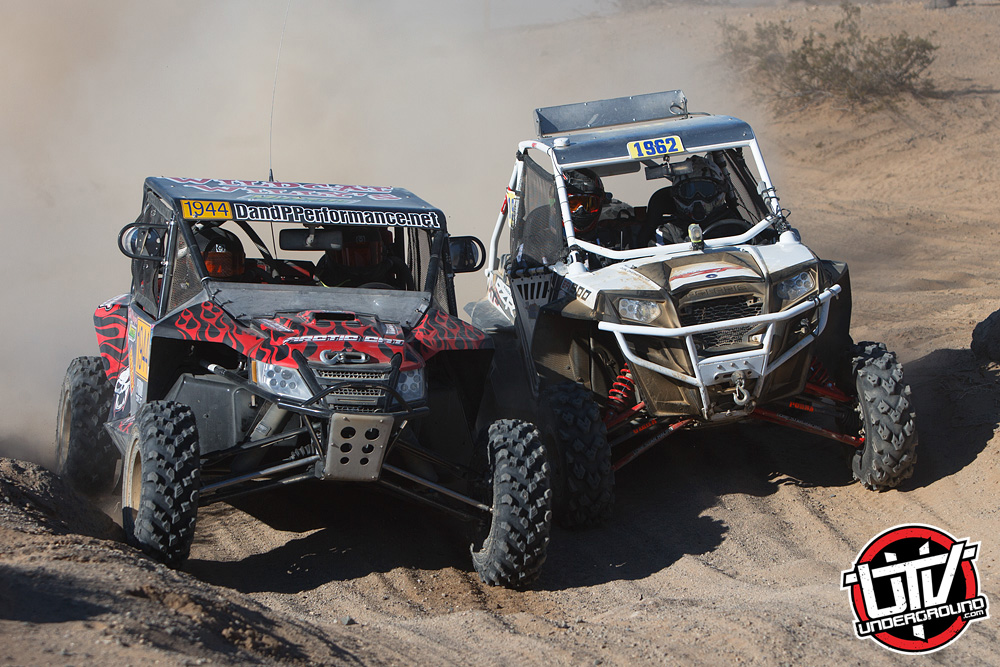 A few more machines would finish the entire course but only these 3 would make it in on time. What makes these times so amazing is that the top 3 finishing UTV’s would have placed in the top 5 of the EMC Unlimited class and in fact beat ALL of the stock vehicles in the EMC race proving once again that UTV’s are not to be taken lightly. We commend each and every single racer who took on the KOH race this year. This race was not your typical off-road race, this was the absolute toughest race ever held for UTV’s! We look forward to next year!! 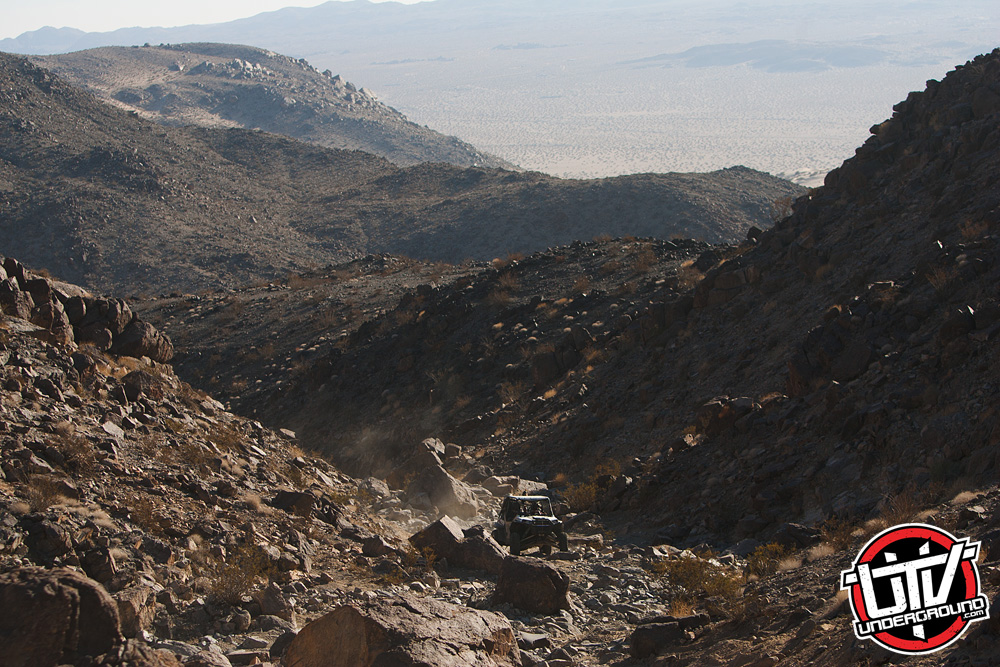