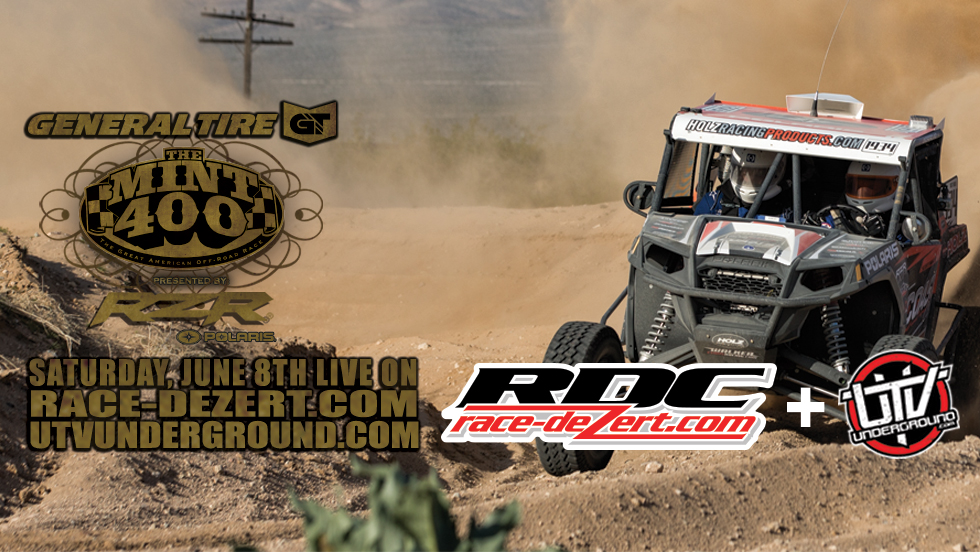 The 2013 General Tire Mint 400, presented by Polaris – will premiere on SPEED Channel, Saturday June 8th at 9pm EST / 6pm PST. This special two-hour primetime television show captures the most dynamic and thrilling off-road racing on the planet – at the most prestigious and challenging off-road race in America. This year, over 250 race teams battled the brutal four-hundred mile Mint 400 desert racecourse. The competition was fierce and full of drama, suspense, and back and forth clashes in all twenty classes of vehicles – from the fast growing Pro UTV Class, all the way up to the million dollar Unlimited Trophy Trucks. The overall lead changed seven times, and less than half of the competitors finished the destructive and punishing race.

Don’t have SPEED Channel? No problem! Thanks to the generous support of Polaris, the two-hour Mint 400 television special will be SIMULCAST on Race-Dezert.com and UTVUnderground.com worldwide! The SIMULCAST will be available in every country for free! When the show runs on June 8th at 6pm PST / 9pm EST on the SPEED Channel – it will become “Live” on Race-Dezert.com and UTVUnderground.com. 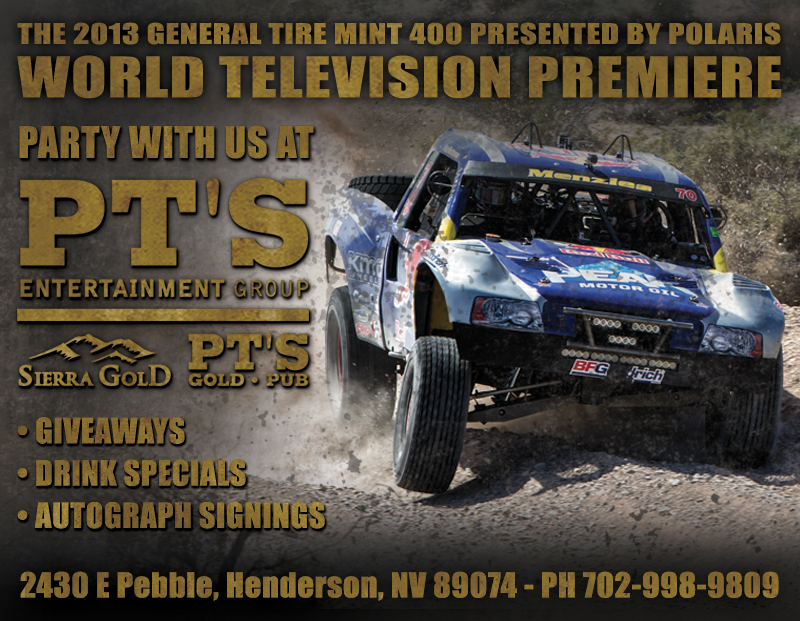 Come join us in person at the premiere.

What: The WORLD PREMIERE of The 2013 General Tire Mint 400, presented by Polaris on SPEED!
When: Saturday, June 8th Party starts at 4:30pm – Premiere starts a 6pm!
Where: PT’s bar & Grill – Las Vegas, Nevada

Come join us for the 2-hour worldwide television premiere of The 2013 General Tire Mint 400, presented by Polaris. Party with some of the top off-road racers in the world and watch them battle The Mint 400 on SPEED TV.

• The PT’s Bar & Grill Off-Road Takeover will be the first Official Party of the Summer!
• 50+ PT locations will simultaneously premiere The Mint 400.

About the General Tire Mint 400:
The General Tire Mint 400 is the oldest, roughest, most spectacular off-road race in North America! It was started in 1967, and is steeped in American lore, as thousands of racers and celebrities from around the world have attempted to tame the brutal Nevada desert. With over 300 race teams, 20 classes of vehicles, and more than 20 thousand spectators…The Mint 400 is currently the biggest off-road race in the world! Now owned by The Martelli Brothers, The Mint 400 is part of the Best in The Desert Off-Road Championship.