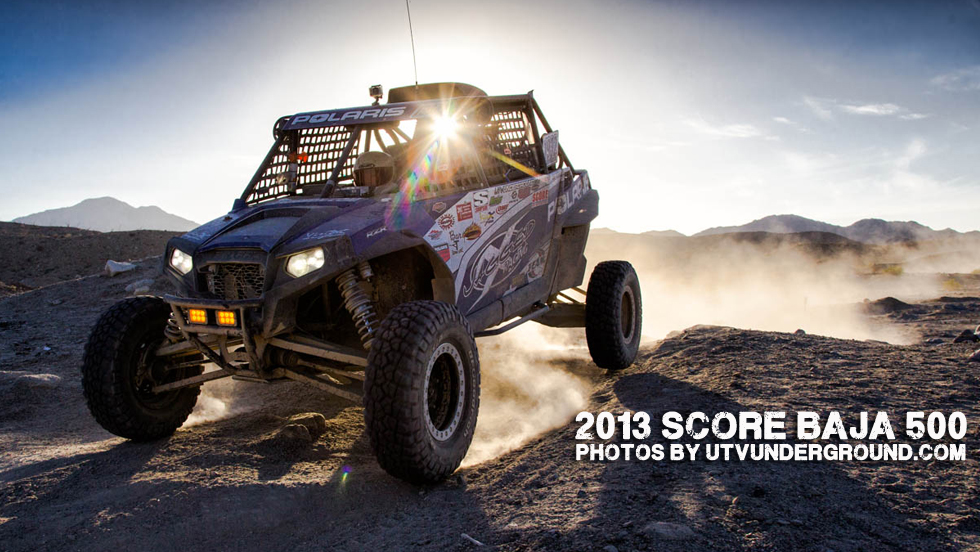 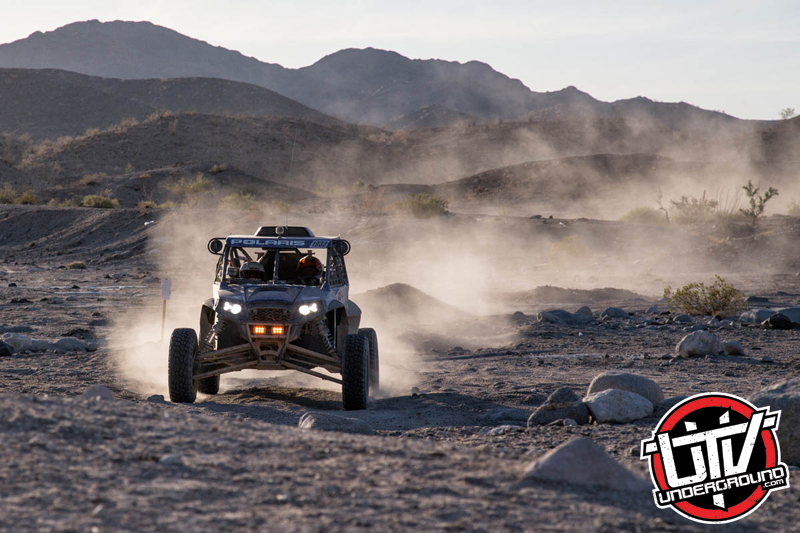 GRUELING – Thats the best word to describe the 2013 Baja 500. 10 Pro UTV’s would stage to take on this challenging race, only 2 would finish. Of the 2, Polaris’ Matt Parks & Brandon Schueler in the 1932 Jagged X RZR XP would be the team to claim the top spot in the 2013 SCORE Tecate Baja 500. They are not only the first Pro UTV team to win this prestigious race, but now the first to go back to back having won the 2013 SCORE San Felipe 250 earlier this year also.

The race shifted leads a handful or times but when the Murray’s crashed and broke their Can-Am Maverick somewhere around RM 355, Matt Parks would take the lead and never look back. The Murray’s had a great run going through the middle of the race, escaping a bottle neck at the Summit and able to put a 30 +/- minute lead over the Jagged X machine by the time they reached the 200 mile mark. That lead would be enjoyed up until about RM300 when they would stop to perform their driver change and allow Parks to slowly begin to reel them in. Their late race crash would spoil their valiant effort and make way for Jagged X to take home their second win in the 3 race SCORE series. Jagged X would finish in 17 hours, 49 minutes. 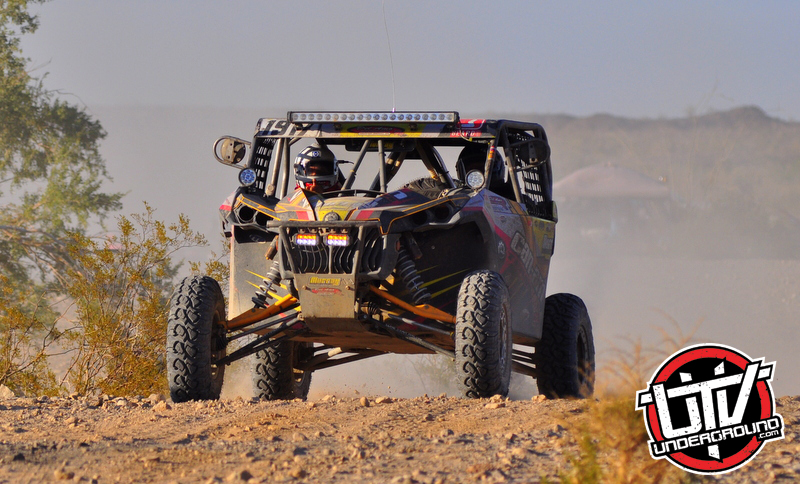 While Jagged X ran away there was one team still in the hunt for the podium and that was the 1904 Can-Am Maverick of Cory Sappington. Sappington, despite a depleted crew would press hard into the night finishing well after the sun had risen. His effort despite having only 1 chase truck and having “ironmanned” the race behind the wheel would make his second place finish even more spectacular. Our hats are off to he and his crew for overcoming the challenging Baja 500. Sappington would finish in 20 hours, 20 minutes.

It is disappointing for us to see 8 of the 10 UTV’s DNF, but I know that each one of those teams and racers are even more disappointed. The time, effort and manpower needed to take on this race is enormous. The time some of these teams put into prep and pre-running makes DNF’ing even more heart breaking. We (the UTVUnderground.com crew) pulled an all nighter chasing the leaders to the finish and then waiting until almost 6am before seeing Jagged X finally cross the finish line almost 18 hours after they left. Baja racing is not for the weak, you don’t just show up and go race expecting to win let alone finish. It is an endurance race, a battle with the course more than with competitors. The Baja will make you feel like the biggest person on earth one minute and then humble you to the point where you begin to question your worth the next. 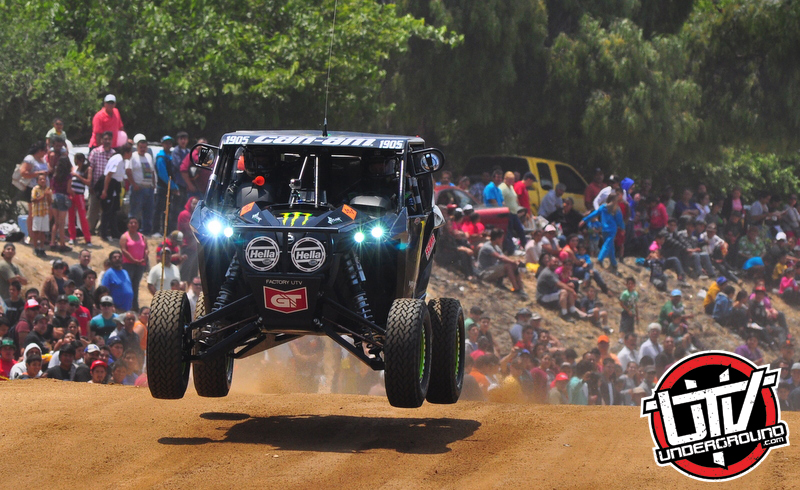 Racing in a UTV makes this challenge even more difficult. 200 + vehicles are sent off the line in front of you, some bigger and faster, some much slower. The course changes by the minute and you are left to not only try to defeat your opposing class racers but are also forced to deal with the carnage strewn before you by 200 machines raging down your same path. Baja isn’t just a race, its an experience. Some say the race gets in the way of the pre-run and partying, we would tend to agree there. But its this battle of man vs. machine vs. nature vs. the race course vs. competitors that makes the dynamic of Baja racing so much more gnarly then any other form of American desert or short course racing. Baja is the benchmark, if you want to be known as the best you must take on and conquer Baja. If you want to see where you and your team and machine truly rank amongst off-road racers then you have to race Baja. For years we have heard people say that Jagged X was the premier team in UTV off-road desert racing, but if they are so good then they should go race Baja. Well guess what, Jagged X has all but locked up a 2013 SCORE Championship, and for that we congratulate them. 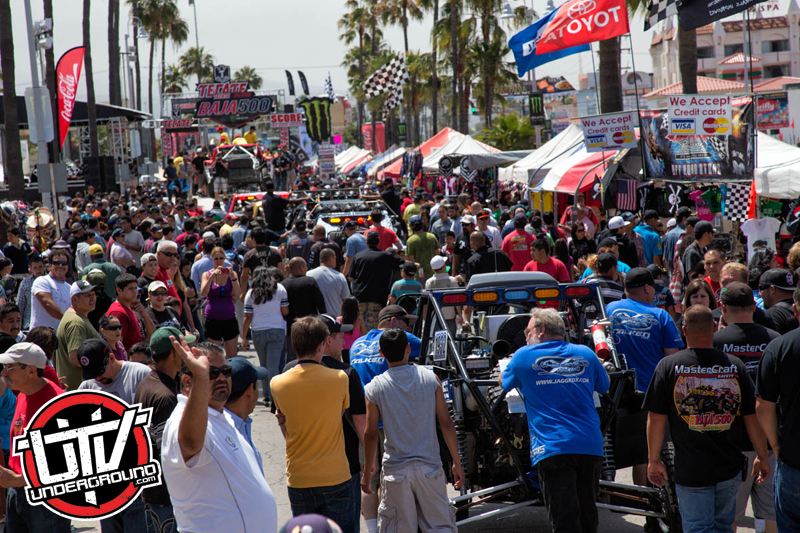 I want to first thank each and every single racer, crew member, and team who represents UTVUnderground.com on and off the race course. Baja is a special place for us and to see so many of you come up and talk to us and thank us for our work makes it all worth it. I want to secondly thank our crew. We were up well beyond the 24hr mark before any of us got to go to sleep for any reasonable amount of time. Rusty, Ryan, Conrad and the rest of our crew worked their butts off to help us actually chase just the UTV’s in Baja for the first time ever. Chasing trophy trucks is easy, waiting up all night for UTV’s is a challenge even as a media crew. I apologize for not being able to get photos of every UTV racer out on course. Like any desert race we do what we can but at some point we have to leave our spots and run up with the leaders to ensure we get to the finish in time to see them across. Later this week we will drop a full video for Polaris surrounding our Baja 500 race experience and tell the story of the winning Jagged X team.

See all of our contingency photos here: https://www.utvunderground.com/2013-baja-500-contingency-5768.html