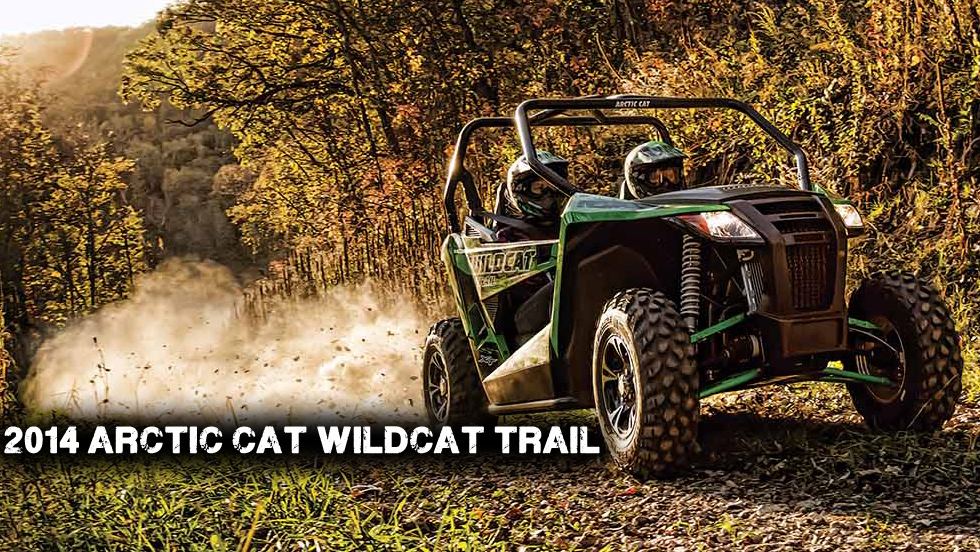 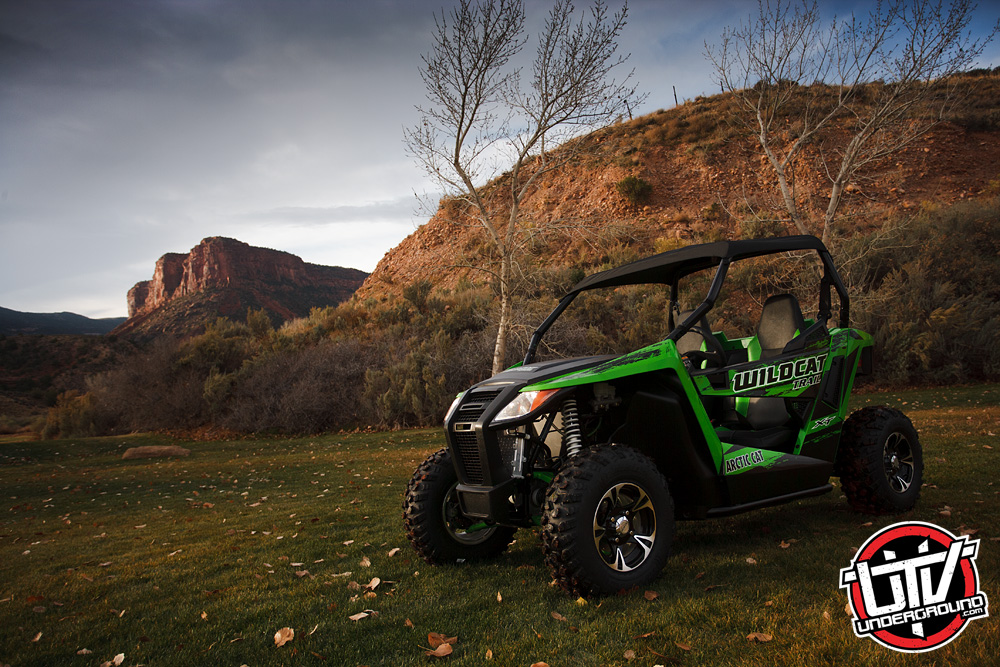 When my good friend Joey D. of UTVUnderground.com asked me to take a trip out to Gateway Colorado for a reveal of a new 50″ Arctic Cat Wildcat model I jumped at the opportunity.  To leave the concrete jungle and experience wide open nature would be a chance of a lifetime.  The Gateway Canyons Resort would serve as our host, and it was a perfect place for Arctic Cat to showcase their new Wildcat model named The Wildcat Trail.  Everyone is aware of their popular Wildcat and Wildcat 4 models, but new for 2014 is the Wildcat Trail which is dubbed the Wildcat’s little brother.

With a 50” width and gross weight under 1000 pounds, Arctic Cat is hitting this part of the UTV market hard. The Arctic Cat team was very open on who their competition is, and how they plan to go from number two in the market share to the top. Polaris’s comparable model is the RZR 800 and has sat atop the 50″ leader board since its introduction in 2007.  Spec to Spec the Wildcat Trail beats the Polaris RZR 800 in many key components such as horsepower, suspension travel, power to weight ratio, overall dry weight, and a lower MSRP. 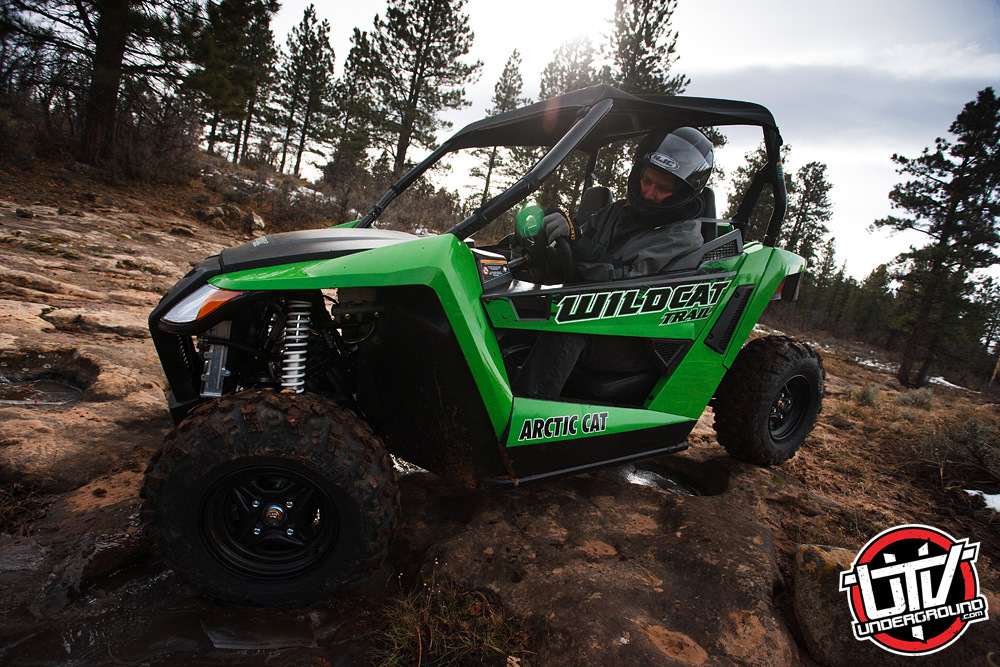 You can talk about specifications all day but like any other off-road machine, you really don’t know how it will perform until you get behind the wheel and drive it. Luckily we got to spend a full day out in Gateway driving the majestic trails and I was pretty impressed with how the machine handled the open and rough terrain.

I am fairly new to driving UTV’s, with most of my time off-road spent on ATV’s and behind the wheel of offroad trucks, including my own Toyota Tacoma Prerunner/Race truck.  While I do have some decent seat time in a Polaris Ranger Crew, to finally drive a more performance driven UTV was pretty exciting.

Sitting in the Wildcat Trail with its high back bucket seats, it positioned me in a nice posture and combined with the tilt steering wheel was very easy to get comfortable. I never felt awkward while driving and my back and rest of my body were never sore. Arctic Cat made it a priority to have you sit low in the Wildcat to bring your center of gravity down and so that “you’re riding in the Wildcat, not on it”. In fact, you sit 3” lower then you would in a Polaris RZR 800. Everything was within your reach from the shifter, light switch, digital gauge, and 4wd switch.  One experience we had with the Wildcat Trail was that your left knee would tend to bang against the metal bar behind the door while driving, but we were told that a pad will be added to avoid that so we were happy to hear that. 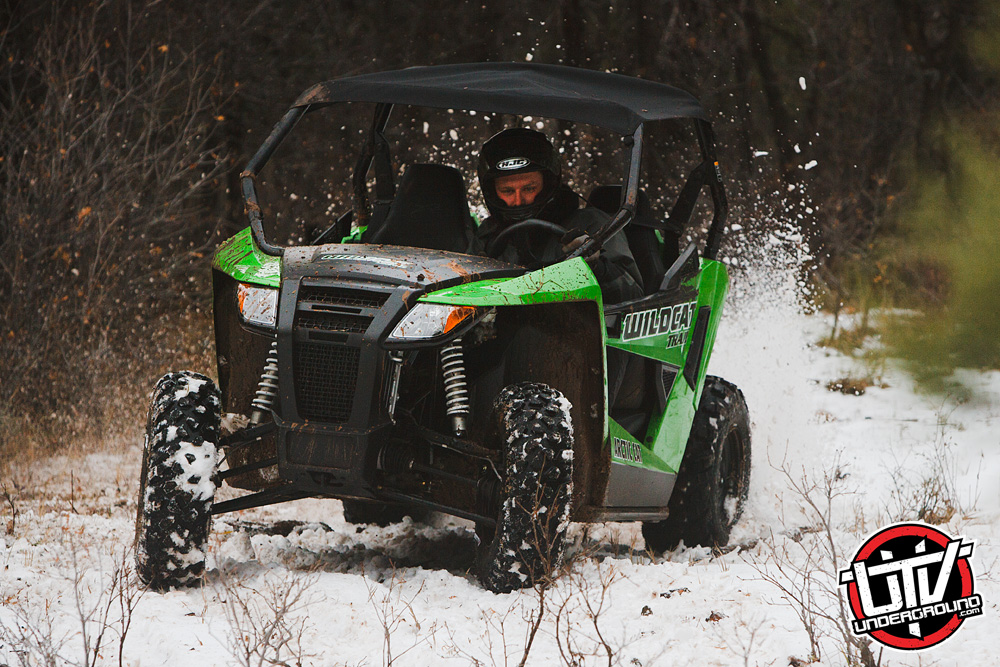 The Wildcat Trail sports a brand new 700cc engine paired with a new transaxle design (rumored to be able to handle up to 120hp) specifically designed for this model, and while it’s a smaller engine then the Polaris 800, it has more horsepower. Because the Wildcat is so light compared to larger UTV’s you can really feel the power getting to the ground. From a standstill the Wildcat gets right into the power band and you’re off. At higher speeds it has enough torque to keep raising the speedometer. While it doesn’t have the horsepower or top speed of its bigger brother the Wildcat, it has plenty to get you out of any trouble and to put a smile on your face blasting through the trails. For the record top speed for us was 64 mph.

Disc brakes on all 4 wheels did a great job of slowing you down. If you wanted to you could lock up the brakes but I never felt the need. Even at higher speeds going down fast graded roads, you could drive the Wildcat into the turn and brake pretty late keeping your momentum up. Power steering is an upgrade most buyers get with larger UTV’s but isn’t an option with the Wildcat Trail. While that might be a negative for some people, there isn’t a need for it. Because the Wildcat Trial is so light, the steering is very responsive and it doesn’t take any effort to turn the wheel. In my opinion, not having it far outweighs the additional cost it would take to have one from the factory. 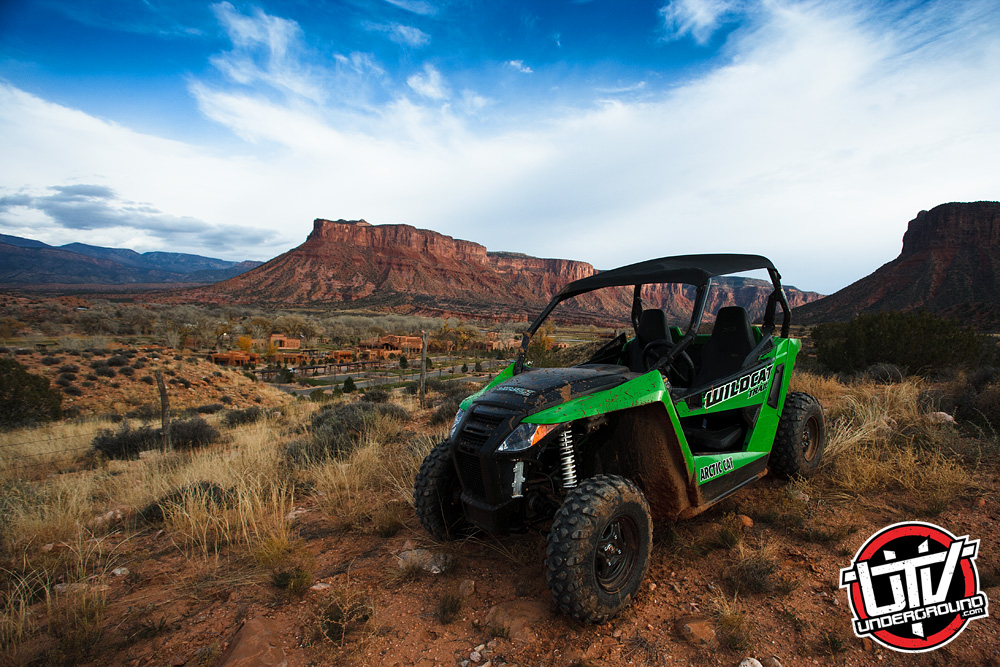 The trails in Gateway let us put both the wheel travel and ground clearance to the test. The trails had a few sections with large ruts in them from bigger vehicles and for the most part the Wildcat Trail handled them great. You have to be careful to not stick one side into too deep of a rut as it makes the UTV feel a bit tipsy, but driving smart you can avoid that. Suspension wise the 10” of wheel travel with the FOX Shocks kept the ride enjoyable. I never found myself bottoming out hard (and I tried) and the ride was never harsh or choppy. Arctic Cat and FOX seemed to find the right shock combination for a nice plush ride on the trail.

Turning was very nimble due to the shorter wheelbase and overall width, but you do have to be careful at higher speeds. The 50” width while stable for tight twisty trails, at faster speeds you have to be careful and also aware that the smaller width also means less stability. Go into a sharp turn too hot and you’ll wish you had the larger track width of the Wildcat Trails bigger brother. Like any off-road machine, I found that after a few hours of drive time and familiarizing myself with the machine I could push it to its limits and it was a blast to do so! 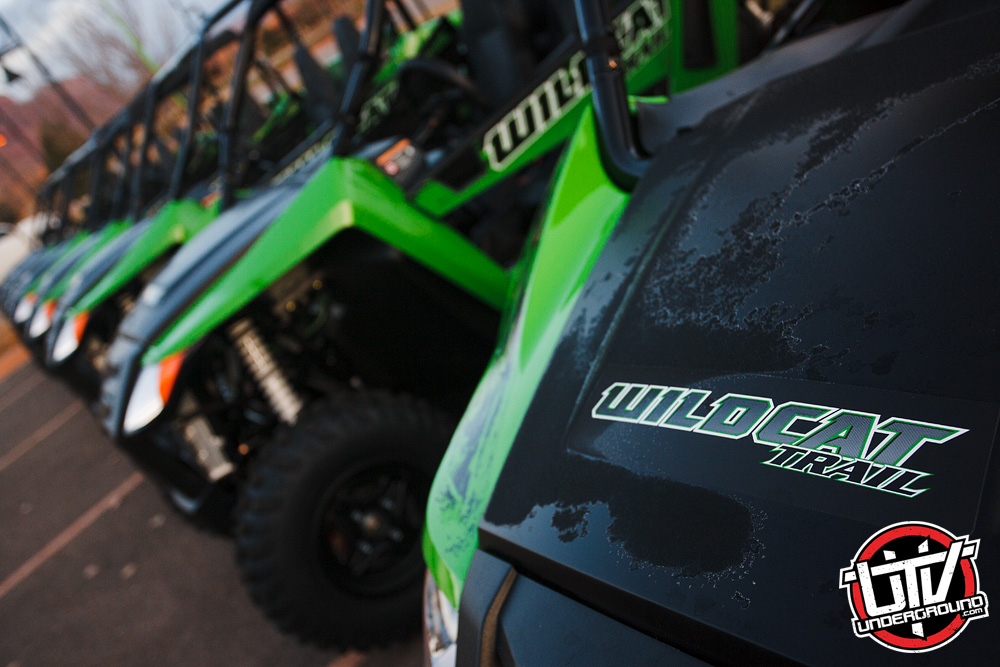 The main thing people will need to remember when purchase a Wildcat Trail is what its designed for. It isn’t something you’ll take to the desert and blast through big whoops, or go to Glamis and throw it into a berm or jump it off a dune. Its designed for the trails that were designed for ATV’s, and we think its great for that. If you want it for those other reasons you’ll be better off getting the standard Wildcat. However if you’re looking to get something to have fun in the woods or other tight trails and put a smile on your face you won’t be disappointed with the Wildcat Trail.

On behalf of UTVUnderground.com, I would like to thank Arctic Cat and the staff at Gateway for an amazing trip to Colorado. Testing the Wildcat’s was a blast, the terrain was amazing and overall it was a fantastic trip! 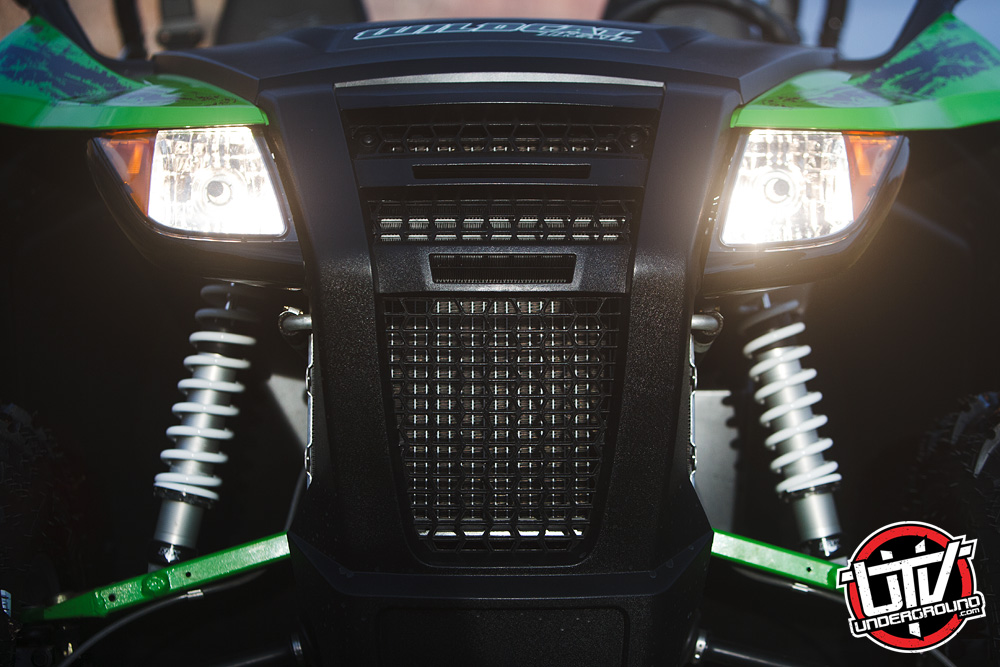 Smacking Down The Competition

The big Wildcat news is actually something small. The Wildcat line-up just got wilder with two new mod- els that are 50 inches wide; behold the Wildcat Trail that sets a new standard in power, ground clearance and suspension travel.

Modern technology brings you more horsepower, less weight, improved efficiency and long-lasting durability. The all-new Arctic Cat designed 700 parallel-twin features EFI, 4-valves per cylinder and liquid cooling. This next generation 60-plus horsepower engine was designed specifically for the Wildcat Trail chassis and the engine feeds into the TEAM

Rapid Response clutches and electronic selectable 2WD/4WD with front differ- ential lock. The Wildcat Trail has the industry’s lowest power-to-weight ratio and will dust the competition in a head-to-head drag race.

The Wildcat Trail frame features a 40-/60-percent front/rear weight distribu- tion for optimal handling at any speed. The driver and passenger are located 3 inches lower than the com- petition so you are seated near the low center of grav- ity, leaving occupants less affected by the movements of the vehicle with greater confidence and control.

With an industry-leading 0/10.5 inches of front/rear suspension travel and 10 inches of ground clear- ance, both Wildcats are built to navigate over trail obstacles. The front and rear double A-arm suspensions have a swaybar which keeps the tires planted while the suspension moves through its travel for unmatched traction and control. And something the competition doesn’t have to smooth out the trails is premium FOX nitrogen gas-charged shocks.

A 300 lb. payload in the rear cargo bed is large enough to carry a cooler and a Jerry can of gas, a rear 2-inch receiver and 12-inch steel wheels with 4-ply Carlisle Trail Pro tires were designed exclusively for the Wildcat Trail. Available in Green, Lime or Red. 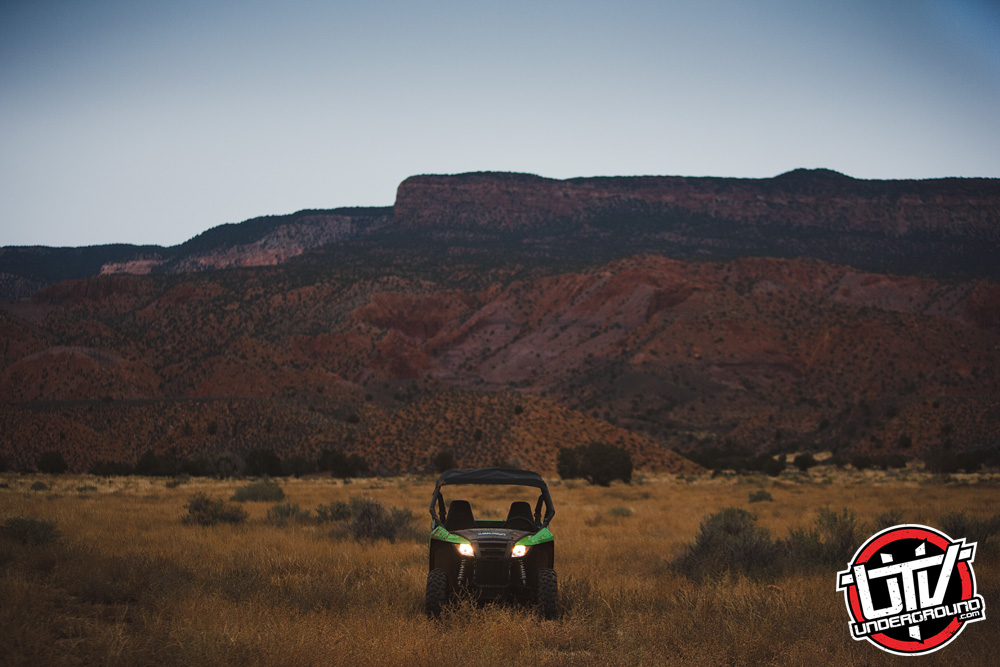 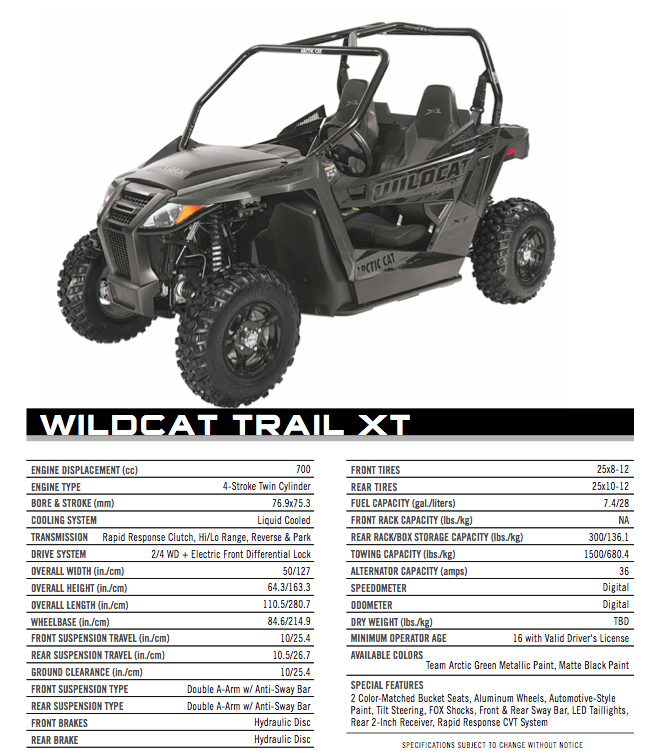 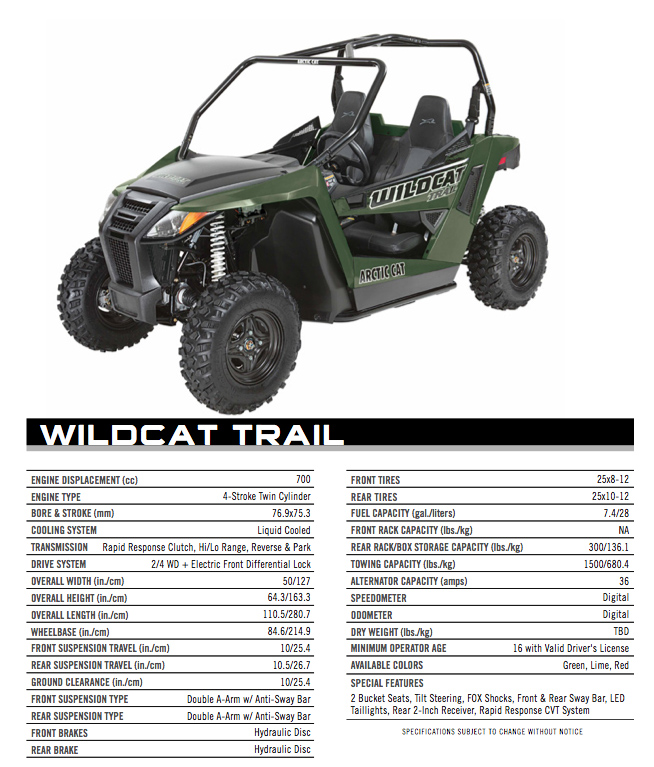