Home All Stories News 2014 Rally On The Rocks 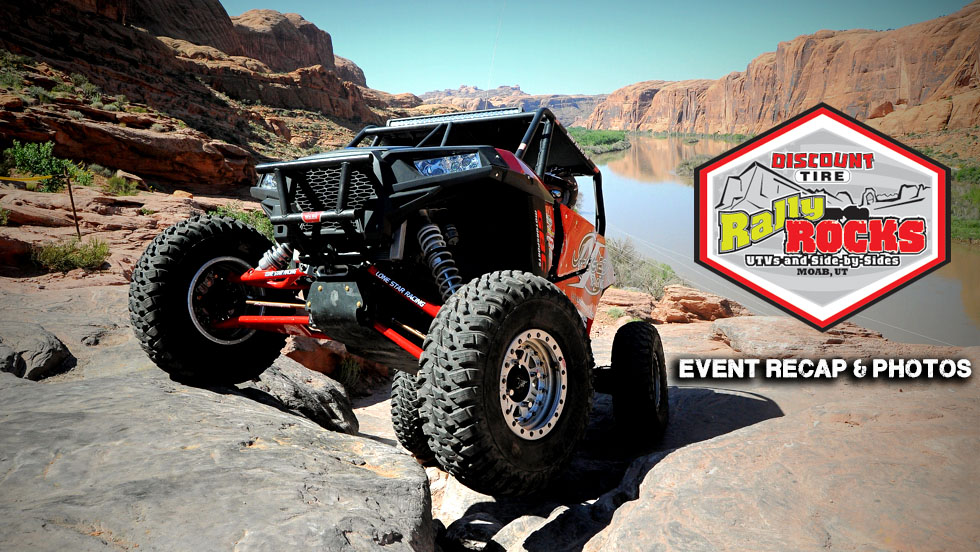 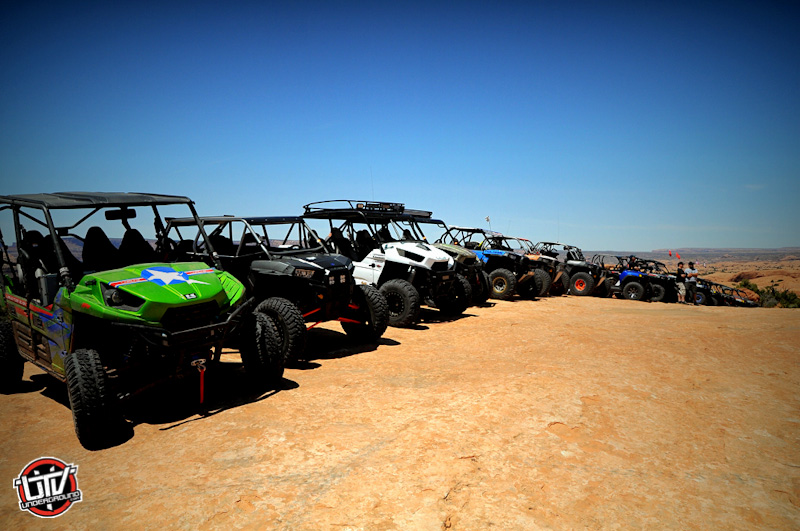 We first traveled to Moab for Rally On The Rocks back in 2010. I made the trip with Reid Nordin of Kawasaki. At the time I was still very skeptical of rock crawling. To me it was slow and boring. That trip to Moab changed everything. Not only did I become a fan of rock crawling, I became obsessed with building my own rock capable machine. My opinion of rock crawling had forever been transformed.

Another thing that changed for me that trip was where I told people my favorite place to ride was. Until that point I would answer with either Ocotillo Wells or Glamis. That trip in 2010 to Rally On The Rocks made me fall in love with Moab. Since then I have not missed a ROTR event and every time I am asked where I like to ride most I almost always tell the person Moab. 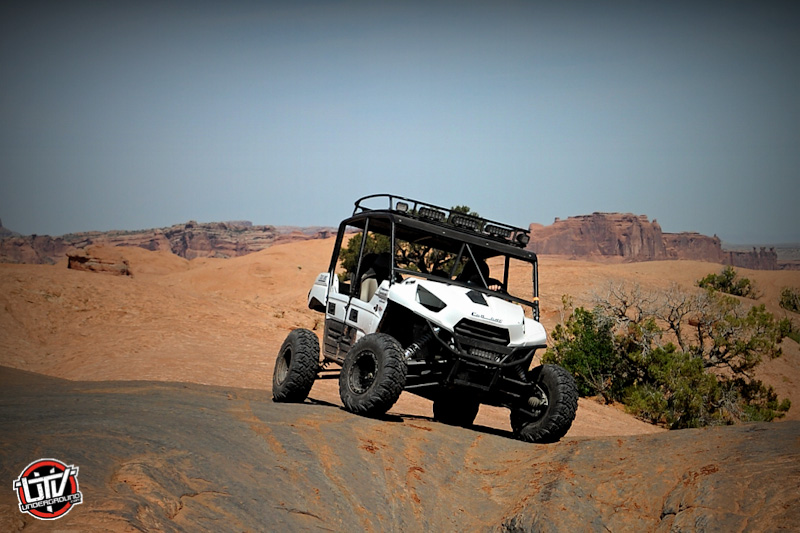 Moab is diverse. While rock crawling is the primary style of riding, not every trail is filled with massive rock obstacles. Rather, Moab is an off-roaders dream no matter what pace or what style of riding you want or prefer to do. Want fast trails? You got it! Want slow paced easy scenic trails? No problem! Want to play in some sand? Lets go Behind The Rocks! How about a super treacherous rock trail where winch lines are almost always a must? You know Moab has that! Moab has something for everyone, its diverse and its beautiful. Moab never gets old to me. Every time I make the trip I get to ride and see something new.

Since traveling to Moab my first time I have always said I wanted to take friends and family there to let them experience the beauty it has. I tell people all the time that the Rally is the perfect time to go to Moab as a first timer and for me to take someone and let them experience Moab for the first time is like reliving my first time over again. This year I was getting to travel to Moab with my good friends Rusty and Mike. Both are guys who played a role in getting me into the sport of UTV and now I was getting to take a week long trip with them to my favorite place in the world to ride. 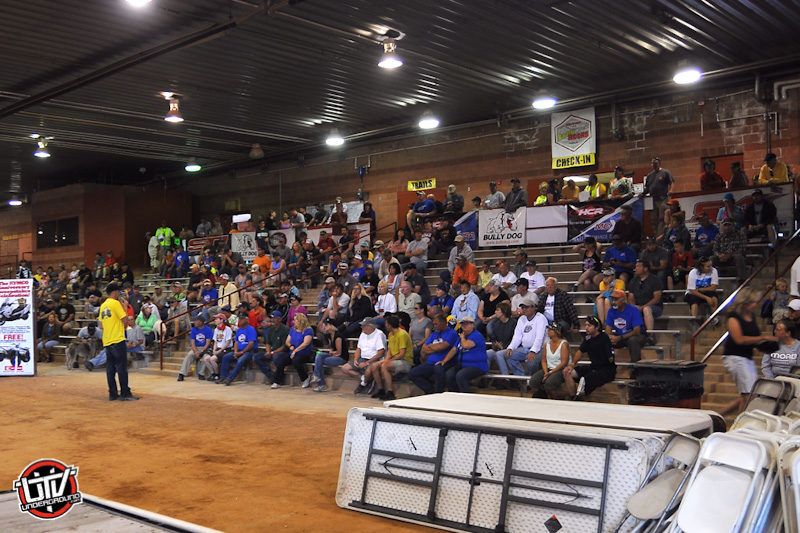 Each year Rally On The Rocks gets bigger and better. Lanse Chournos and Jared Livingston took the event over a few years ago and since doing so have taken the event to amazing heights making it one of the biggest and best UTV rallys in all of the United States. This year 1000 people would sign up to attend making it the biggest year ever. The organization that takes place is amazing considering the size of the event. They have a wonderful staff of volunteers who are courteous and helpful. Their trail bosses are fun and always keeping the rides safe for everyone. Vendors flock to the event with every type of aftermarket accessory imaginable and even the industries top OEM’s all attend to offer demo rides and support. If you have ever wanted to travel to Moab to ride but have never been able to do so, going during the Rally On The Rocks is the way to go!

Earlier I mentioned how I had been dead set on building my own rock crawler after riding in Moab for my first time. In 2012 I began work on my Kawasaki Teryx 4 which was built with Moab and my family in mind. Unfortunately for my Kawasaki but fortunately for us at UTVUnderground.com the past 2 years Polaris had paid us to come to ROTR to film the event for them and to tell the story of RZRs at the Rally. This was a lot of fun for me and my crew and the RZR is amazing in the Moab but my poor T4 just sat home waiting for its first trip to Utah and to the Rally. Finally this year was the year and it was only fitting that I was able to spend the first day on the rocks in Moab with Reid Nordin! It was he that broke me and now I was getting to ride side by side with Reid and a host of other friends in my own machine, my T4 nonetheless. Reid took us to the Top Of The World! It was the perfect way to kick off the trip and break in my T4 in Moab! 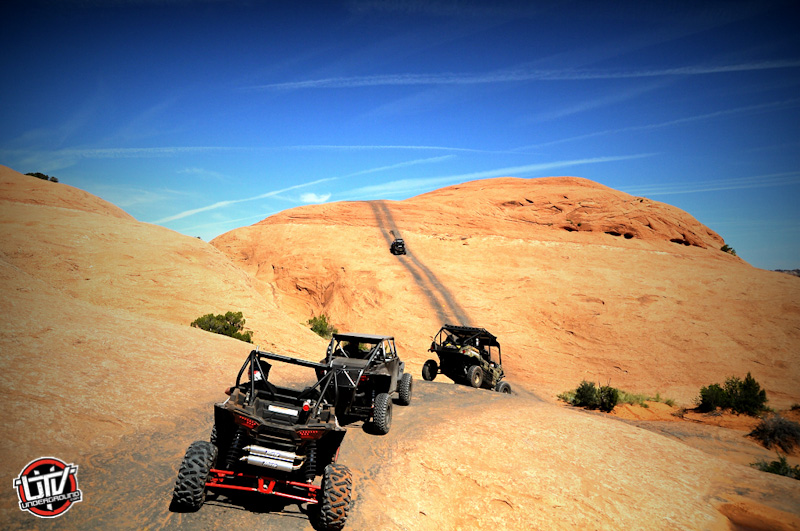 My T4 was awesome in Moab but riding with close friends is really what made this years trip the best one ever for me. We did numerous trails and it was so much fun to see my buddys get excited about riding in the same place I fell in love with years ago. They too were saying all the same things I say every time there about bringing our families and sharing this place with everyone we know. Moab is off-road heaven!

While the riding is the highlight the event itself was amazing. We got to meet and see so many people and its always a pleasure catching up and spending time with old friends. We are thankful for the Rally On The Rocks event. It truly is one of our favorite events and its one that no matter what we intend to make every year!