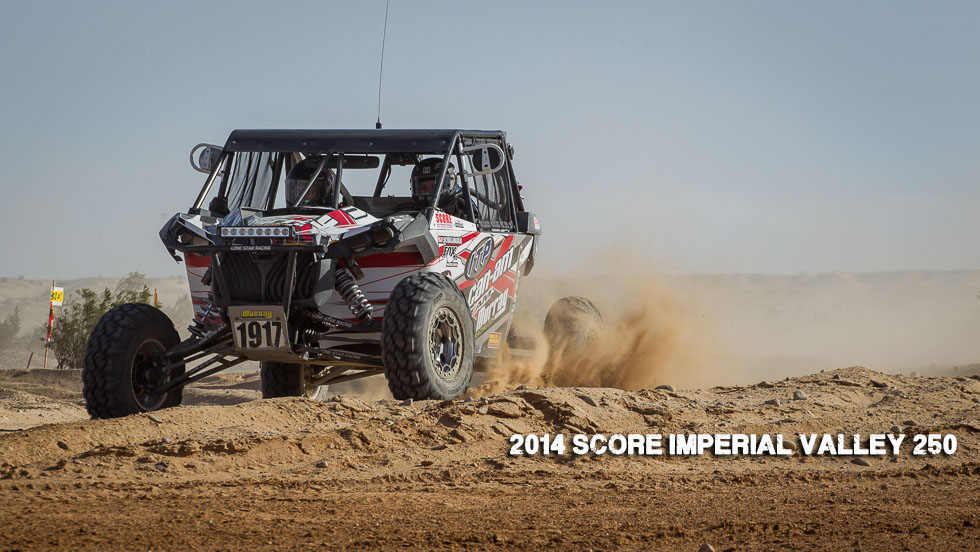 Official results have not yet been posted by SCORE as they continue to review the race data. As for now we only have what we were told as the unofficial top finishers to whom SCORE gave podium awards to on Sunday.

The 2014 SCORE Imperial Valley 250 was the first race held for SCORE in California in many years. Despite some heavy winds and one very challenging course (navigation wise) the race went off without a hitch. Many have complained of the courses 136 Virtual Check Points (VCP) and the difficulty in locating them on course especially as the race wore on. Because of this SCORE is taking a while in announcing the official results as they pour through what will certainly be a lot of missed VCPs resulting in penalties.

Huge congrats to the #1917 Can-Am Maverick Max of Murray Motorsports for taking the big win (unofficially) in this past weekends 2014 SCORE Imperial Valley 250 race. What makes this win spectacular is they did it blind with absolutely no pre-running and they started the race in the very back of the field. This race wasn’t on their to do list Derek Murray explained. The team was busy getting ready for this coming weekends BITD Silver State 300 when they decided to go ahead and take on the IV250 at the last minute. Their last minute decision paid off!! Jason & Derek Murray have had a challenging season thus far so to see them get the top spot was a huge boost for the team, Can-Am and the Murray brothers themselves! Murray Motorsports are not only a team made up of solid competitors they are some of the coolest, most humble racers you will meet and we at UTVUnderground.com are always happy to see them do well.

Finishing in second (unofficially) would be the 1905 Can-Am Maverick of Marc Burnett. Burnett is no slouch when it comes to doing his homework on these SCORE race courses. Marc was very well prepared for the 136 VCPs placed around 82 mile loop course that SCORE laid out and this preparation led him to finishing the race in 2nd all while knocking on the Murray’s door. Burnett is dead set on a championship this year and after winning the San Felipe 250 a month ago, he is in prime condition as SCORE travels back to Baja for the Baja 500 in June.

Finishing in the 3rd position was Mr. UTV himself Cory Sappington in the 1904 Can-Am Maverick. Cory would round out the podium (unofficially) giving Can-Am their first sweep of a professional UTV desert race ever. Sappington, one of the most experienced UTV racers in the history of our sport always is a threat and this weekend proved to be no different. Not always showing up with the prettiest car, Sappington always finds a way to be prepared and willing to do battle. We commend him for all of his efforts on and off the course, always promoting and assisting and helping our sport grow. Well done to the entire 1904 Dezert Toyz team!

While they didn’t make the podium we felt excited to mention that the 1949 GlazzKraft Polaris RZR XP900 of Alonso Lopez finished the race in a solid 4th place position. Lopez and his team have built one of the coolest looking and one of the nicest race UTVs ever and finally they have had some luck go their way allowing them to put in a solid performance and finish. Nice work guys and thank you for all you do in representing UTVUnderground.com both here stateside and in Baja!

As results started rolling in we received a ton of messages asking us what had happend to the 1932 Jagged-X Polaris RZR XP1K of Matt Parks. Parks, the 2013 SCORE champion and always a favorite to do well suffered some bad luck this round due to what Jagged-X has described as a “prepping oversight”. Whatever it was it caused Parks to have over an hour of downtime to repair and in a short 160 mile race like this one an hour of downtime will surely take you out of any chance of winning. Fortunately for the team, Parks and co-driver Jason Speis were able to get their machine back up and running and put in what looks to be a 5th place overall finish keeping them still in the hunt for repeating their 2013 championship performance. Jagged-X has more UTV desert racing championships then any other program in UTV racing history, prep is rarely a concern for this well oiled machine. I have a feeling this could really motivate the team as they prepare for upcoming races. Never count them out.

Congrats once again to Can-Am as a team. They are working hard to give Polaris a run this year in both SCORE and BITD. For us on the outside its a fun battle to watch. Despite what some may say at the OEM level, we know this battle means a ton to both companies and I would expect nothing less as they compete for sales off the track and wins on it! We will keep a close eye on this one throughout the year and you know UTVUnderground.com will be there to report after every SCORE and BITD race!

See you all at Silver State this weekend….