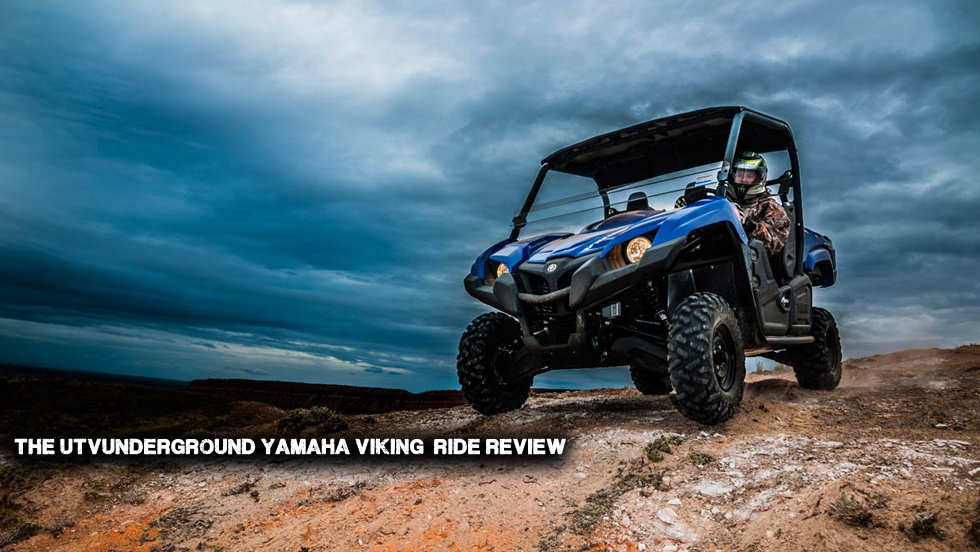 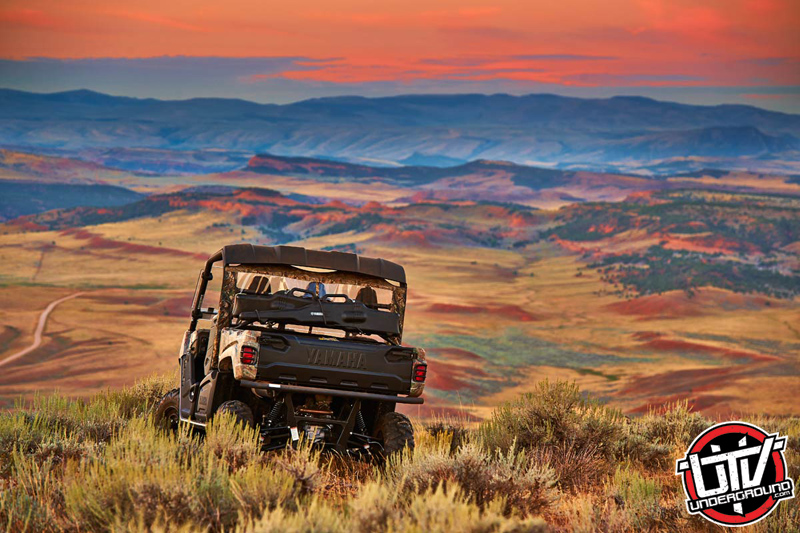 It was a real pleasure to finally be able to join the team at Yamaha on a ride adventure a couple weeks ago. The whole reason I am even involved in this sport, and the only reason UTVUnderground.com was created was because I fell in love with the Yamaha Rhino back in 2005. Since then the site has been created, multiple machines have passed through my possession and numerous ride trips, media events and overall fun has been had. Despite all of the successes and growth it has always bothered me that I had NEVER been able to actually interact with the brand that kick started my passion for this sport and hobby. So getting the invite to spend time with Yamaha back in June/July this year and to be formally introduced to the new Viking by Yamaha was exciting enough, but to actually get the chance to join the brand that started it all on a ride adventure / media event in Wyoming recently was truly a feeling of coming full circle for me personally and for UTVUnderground.com.

When the Viking was announced I knew it would be met with mixed emotions and opinions. Many in this sport, me included, were yearning for a sport model from Yamaha that could bring their brand back to its established glory (in the UTV market), amongst the top and put the Yamaha name back in the conversation when discussing sport riding and racing. Unfortunately for all of us who love sport riding, Yamaha created a plan for reentering the market that would help them erase the negative attention that was put on them via ambulance chasing attorney’s and consumers who felt the need to blame their heinous activities as drivers on the machine rather than themselves. These frivolous suits and resulting negative press are what put Yamaha on hold with ever replacing or upgrading the Rhino and now its what has forced Yamaha to instead focus its reentry efforts towards the utility side. Is this good or bad? Well, that depends on what type of consumer you are. If you are sport rider who desires long travel suspension, big HP and is influenced by going fast and / or racing then the Viking is probably not something you are too thrilled about. However, if you are a hard working ranch hand, property owner or utility based end user then the Viking should perk your interest. 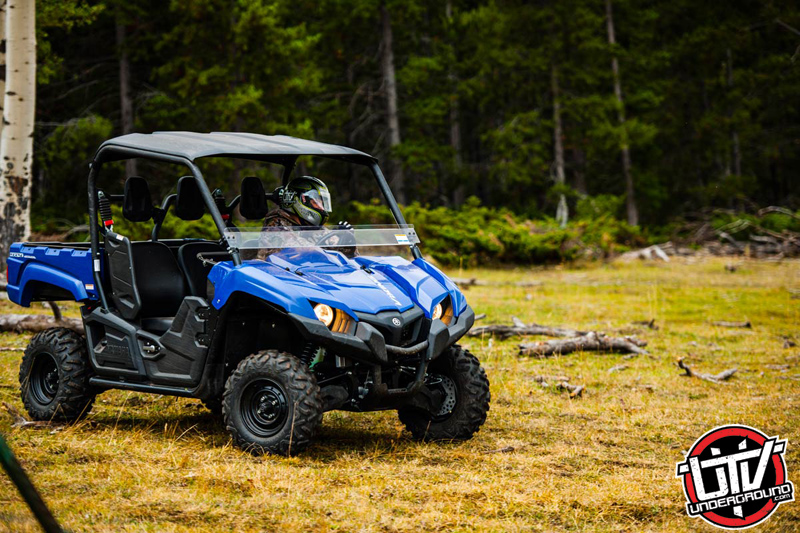 Yamaha, no matter the product is known for quality. Much like their Japanese competitors, Yamaha has prided itself for years on producing high quality, long lasting, good looking machines. Just like the Rhino, quality in the Viking is amongst the best of any UTV I have ever seen. Fit, finish, assembly and quality control appear to be near perfect when making a once over. The Viking is big, you can look at the stats for actual numbers, but when seeing it parked next to the Rhino you realize that its a much larger machine both in wheel base, length and width. Yamaha stressed to us that the Viking was built specifically to go against the Polaris Ranger, I can see why they chose this demographic and as I look at the big picture it makes total sense as to why Yamaha would come back to UTVs with a utility machine vs. a sport machine. Simply put, the utility market is much larger then the sport market.

Yamaha picked an amazing place to fly us media guys into for the test drive of the Yamaha Viking. Red Reflet Ranch is located in Ten Sleep, WY., about 150 miles south of Billings, MT and is located on the edge of the Big Horn Basin Desert. The ranch is a whopping 27,000 acres and has terrain in elevation from 4,200 ft up to 8,300 ft. Its a private ranch that works cattle, farms alfalfa but is known for its 5 star accommodations and cuisine. While they wouldn’t name drop, it was made clear that many of Hollywood’s elite like to use Red Reflet Ranch as an escape from the hustle and bustle of city life. Horseback riding, clay pigeon shooting, fishing and ATV / UTV riding are all activities you can do while staying at Red Reflet. But don’t come here thinking you are going to hunt! While the elk and deer hunting is amongst some of the best in the US, Red Reflet saves those big bulls for themselves! We were floored at the accommodations, the chalet’s (fancy log mansions) were in California terms “pimped out” and the decor was something right out of a Ansel Adams photograph. Picturesque and cozy all wrapped into one! Needless to say, a couple of days just wasn’t enough time to enjoy all Red Reflet Ranch had to offer. 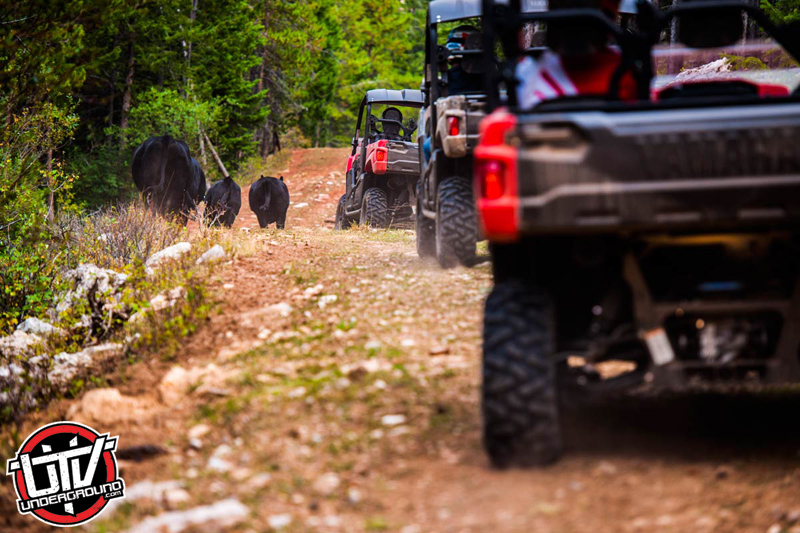 While I could have stayed holed up in my chalet, drinking cold ones and soaking in the decks spa, I was there to get some riding done. The weather was on and off but on ride day it was just perfect for us, well perfect for us who were doing the trail ride in the morning! lol The Viking is a true 3 seat machine (no bench seat) and with 1 or 2 people is extremly confortable. Putting a 3rd adult in the center, while doable, for a guy like me is still a little too close for comfort. They did put a bit of a recline in the center seats position to help ease the “shoulder rub” feeling you get when riding 3 deep in the front seat of a UTV so its not all that bad. I drove the Viking primarily by myself and while I will emphasize that its no sport machine, it is still a very capable trail rig and work vehicle. Power and acceleration still feels a lot like the Rhino and that should come as no surprise since the Viking’s power plant is the 700 single cylinder engine we are all used to. I am left to wonder how much of what has already been developed in the world of Rhino engines and clutching can be put to use on the Viking right away?

I am hardly ever satisfied with suspension. I am one of those guys that knows it can always be better, yet I also have no problem accepting a machine for what it is. The Viking is not a whoop eater, its not going to overwhelm you with its extreme suspension design, but what it will do is get you from point A to B reliably and can do so whether the dump bed is empty or full. A shock upgrade, even if I was using it on the ranch all day for utility would still be in my plans, but again, I am picky. For the average ranch hand the suspension will be more than sufficient. However, IF you plan on turning this into a full time hunting or trail rig then you are going to want to soften your ride up a bit and try to increase your ride height. While I never felt like I wasn’t going to make it up a trail or over a log, I did get the feeling that the suspension was a bit too rigid for those long haul rides. So thats something to consider. Certainly not a deal breaker but again, you may want to change your ride up a bit if you plan to keep your butt in the saddle for longer periods of time. 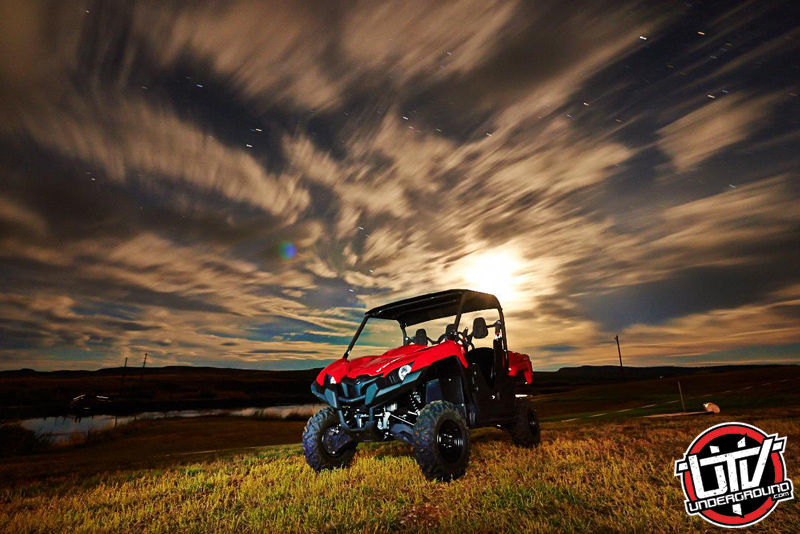 Comfort and ergonomics were great. I enjoy the dash layout on the Viking, the seats are adequate, and it is provided with a standard 3-point seatbelt we are all very accustomed too. Something I have become very conscious of over the years is throttle and brake pedal positioning. In some UTVs the OEM places the seats either too far forward or too high making working the throttle on longer rides very uncomfortable. It could be me I guess, but I have had situations where my ankle begins to get sore and fatigue as I am forced to feather the throttle on long trail rides. The Viking never gave me that negative feeling and in fact, when sitting in the Viking and driving you feel very much like you are in your car or truck. It has great peddle and seat placement! One thing that did bother me a bit, but again is not a deal breaker was the dash vibration at idle. To Yamaha’s credit it does go away the second you begin to drive but at idle and in the park position the dash seems to suffer from a bit of the shakes, to much caffeine maybe?

When it comes to accessories for the Viking, Yamaha went all out. Everything from Windshields to storage boxes to stereo systems are covered from Yamaha directly. Hopefully we will see the aftermarket get behind the machine as well and introduce many more amenities that we have all gotten accustomed too!

When it comes to being a work horse the Viking is a winner! It has a large dump bed, enough to haul numerous bales of hay. It can tow a house and still handles great when fully loaded. Yamaha did their homework when building the Viking. They sought out what it is that ranch hands and farmers needed from a utility vehicle and they went right out and met those needs. They then applied what they knew from the trail riding aspect and did what they could to still give the Viking the ability to go out and be sufficiently used on a hunt or on a fun family trail ride. Is it a RZR or Maverick? NO! But it was never intended to be. Is it a Ranger or Gator? YES, and that was Yamaha’s goal. They wanted to deliver a quality product to a demographic that is buying these machines up in droves. I will imagine there are going to be a ton of happy Viking owners this year and beyond, and I just think UTVUnderground.com might build one up just for ol’ times sake. Then again, we know there is a lot brewing behind the closed doors at Yamaha…. 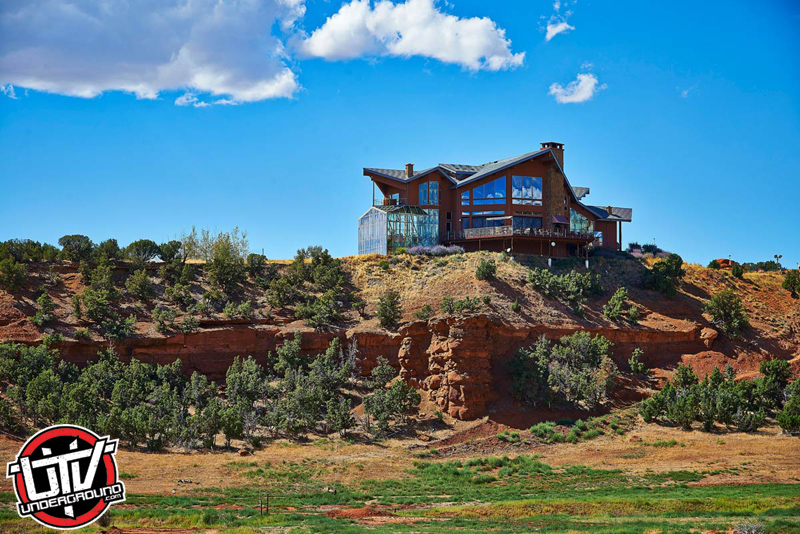 I want to extend a personal thank you to Van, Steve and the entire team at Yamaha for allowing UTVUnderground.com to be a part of what Yamaha is bringing back to the UTV industry. We had a great time in Wyoming at Red Reflet Ranch, thank you to their entire staff as well. We look forward to much more from Yamaha in the near future and can’t wait to bring everyone the news and insight here on UTVUnderground.com.