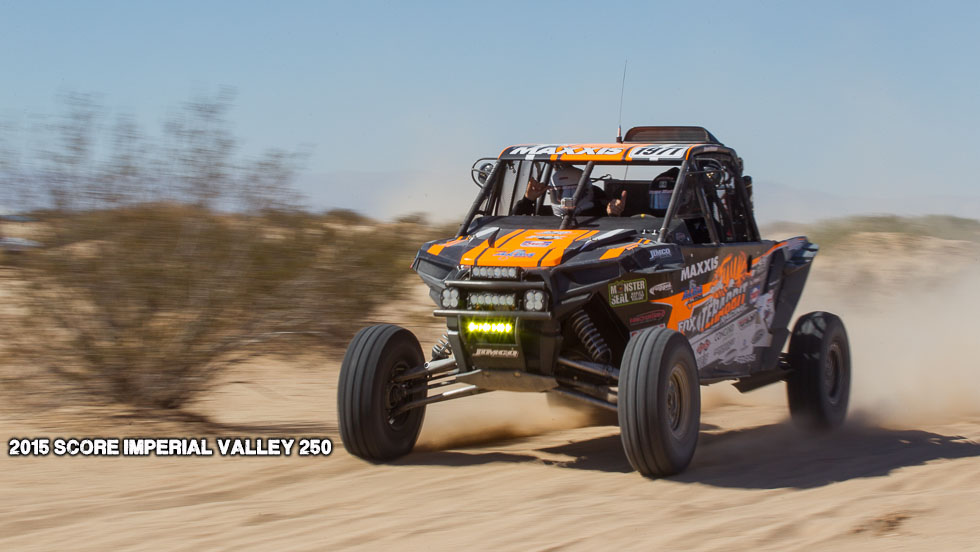 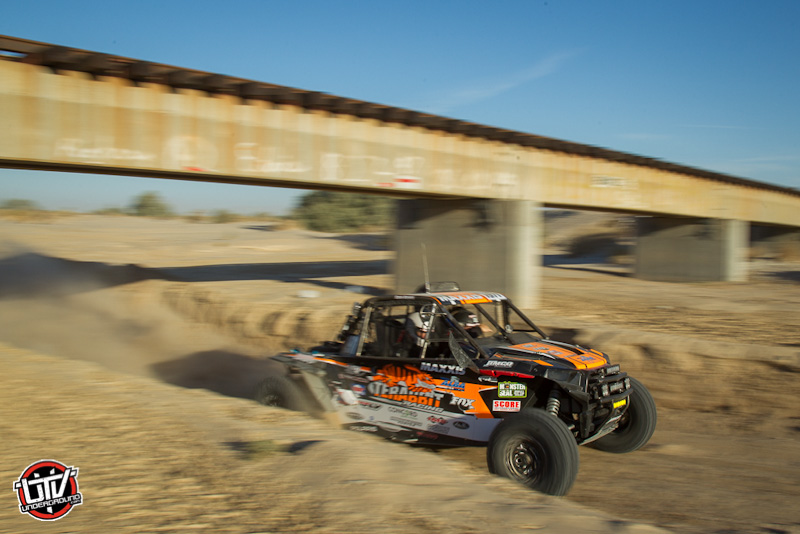 It was a HOT weekend in the Imperial Valley of Southern California, for some it was too hot! 12 UTVs would take the start of the 2015 SCORE Imperial Valley 250 but it should have been 13.

Marc Burnett was all set for the weekend and was in the IV early to be part of the pre-run festivities but a few miles into his practice loop his Polaris RZR pre-runner would burst into flames and eventually burn to the ground. The already injured Burnett would have to scramble from his vehicle and watch it melt in front of his very eyes. Burnett suffered an injury a month or so ago which was forcing him to compete with a casted boot on his foot making driving painful and difficult so to see his pre-runner burn to the ground only added insult to injury. Frustrated but not discouraged Burnett headed back to his pit where he then pulled his race car out of the trailer to complete his pre-run. He would pick up where his pre-runner had burned to the ground. If I told you that his race-car would also burn to the ground only miles from the first fire you would tell me I am making this up, and I wish I was. Only a few miles from the first fire his race RZR would also catch fire forcing Burnett to once again scramble from his vehicle and literally crawl to safety. Painfully he would watch his hopes of competing and maybe even his season go up in flames. In a terrible turn of events, Burnett saw both his pre-runner and his race RZR burn to the ground in what was stated as a prep failure. Luckily for Marc and his co-driver, both would walk away unharmed but their spirits definitely deflated.

“Today was one of the worst days of my life. I started my day off going down to the Score Imperial Valley 250 to Prerun the course. Everything was going great until mile marker 15 when our pre-runner caught fire! We jumped out of the car and tried putting it out with our fire extinguishers but that did not work. We had to sit there and watch the car burned to the ground. We then went back to the pits and got our race car out of the trailer to prerun the rest of the course. I started right where I left off at mile marker 15 everything was going great except my foot was in a lot of pain. We got to mile marker 37 and the car lost fuel pressure and died. My Copilot saw the flames in his rearview mirror first. He was screaming at me to get out of the car if you don’t know I have a huge boot on my foot from my injury and it is a task to get into the car and out of the car with this boot. But when he said the car was on fire I could not believe it, two cars in One Day! WTF!! I jumped out of the car so fast and I had to crawl on the ground to safety because I couldn’t walk. I realized today if I did not have bad Luck I would have No Luck at all. I’m just glad me and my copilot are safe and OK. I want to thank SCORE International and Crew for the rapid response to both of our car on fire. I also want to Thank Polaris RZR for all their support this year and sticking by me.” – Marc Burnett 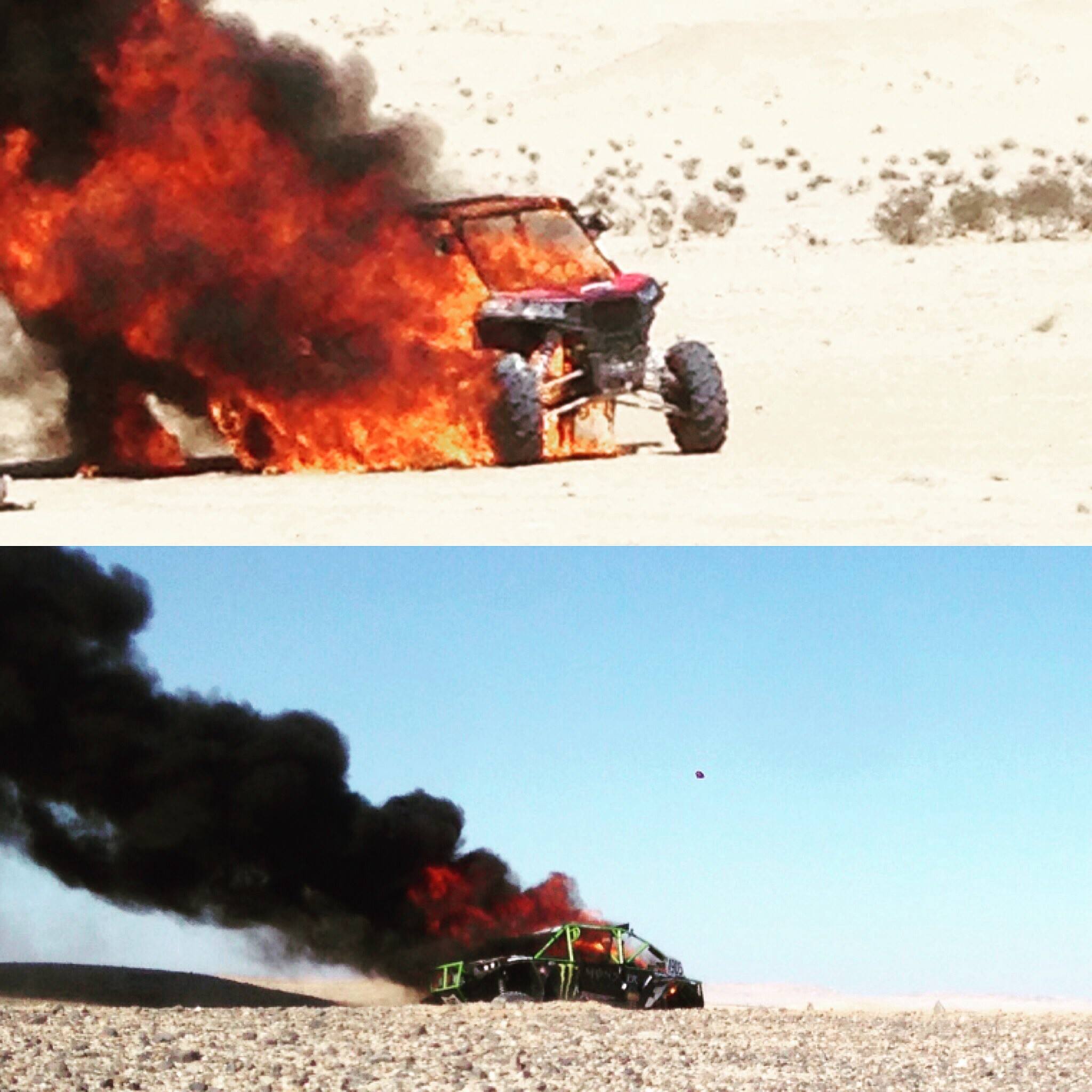 Unfortunately Burnett’s race was done before it even got started but there were 12 other competitors hoping to cross the finish line first in the 2nd running of the SCORE Imperial Valley 250. The heat and terrain would be too much for many, taking out over half the field. In the end, Wayne Matlock in his #1971 Terrabit Polaris RZR would take home the win finishing the race in 4 hours and 24 minutes, over a half hour in front of second place finisher Scott McFarland in the #1942 Highpoint Polaris RZR. Jason & Derek Murray in the #1971 Murray Motorsports Can-Am Maverick Turbo would round out the podium in 3rd.

Johnny Angal was once again the only Polaris RZR XP Turbo running having unveiled his new RZR XP Turbo at last months BITD Vegas To Reno. He would finish 4th and would do it after having crossed the finish line on the second lap and deciding to do a little front flip nearly wrecking his RZR in the process. Now of course, he didn’t really intend to do it and we like to give Johnny a hard time but we are glad he is safe and we know he learned a ton more about his new race machine!!

“Ok so we are only about ten miles from finishing our first lap of two. The car is running great and the course is a little smoother so we are hauling ass! We get to the infield that has some huge jumps and whoop sections. I hit the first jump easy and I think to myself that was weak! So yes, you guessed it, I fly around the next corner and hit the next jump going even faster! I think ‘ah not bad, not bad.” I was trying to stop the little devil in my head saying ‘Don’t be a pussy Johnny, let’s get some air time! There are people watching!” I listen to him and I floor the car! The turbo winds up and we hit the lip of the jump and its straight up. We go sailing thru the air, my car is like an eagle flying thru the air. Then just as we start coming down all the parts and tools and junk that are littered in the car starts floating off the floor. Boner and I are experiencing near weightlessness as if we are in outer space. The front of the car starts nosing down to the ground I hear Boner start mumbling and cussing and I think to myself this is not go to turn out well. Maybe I should just call Weather Man right now on the radio and ask for help and rescue crews!

About that same time the front bumper of our car starts penetrating the compacted earth. I hear Boner cussing and I’m praying ‘Dear Lord etc. etc.’ this is going to hurt! As the car goes deeper into the dirt and then slides across the finish line on the front bumper with our rear tires up in the air! Yep, Boner is still taking shit as some miraculous force comes into play and the back of our car starts dropping back to the ground like it’s supposed to be. I think ‘Holy shit! Hhhhoooollllllllllllyyyyy shit, wow!” Boner starts saying “Holy shit, I smashed into this and that and this happened!” So I floor the car and take back off knowing full well I had just done a really stupid thing. It was one of those ‘hey buddy hold my beer and watch this’ moments but I hadn’t even been drinking! Anyway our pit was just about a mile up the road and we had to stop and get fuel for the second lap. As I pulled in my guys all had puzzled looks on their faces. We come to a stop and they ask what the hell happened to the front of the car? Now you have to understand Boner and I can’t see the front of the car so I just kind of shrugged it off. Boner was still mumbling and cussing as the guys tell me “You aren’t going anywhere! The whole front of the car is smashed and the radiator is smashed and leaking!” So I get out of the car and take a look. Holy shit everything is smashed, bent, tweaked and radiator fluid is pouring on the ground. The cooling fan is broken and one of the guys says something dumb like “this race is over”. I tell him get the Sawzall out and cut all that shit off, put in a new radiator and fan to finish the race. So we do just that. We cut everything off, fix the cooling system the best we can and I tell Boner he car drive the second lap with Craig as his co-driver because really I am thinking there is no way in hell this car is going to make it around for another 96 mile lap. Well, Boner and Craig made it to the finish line and still in 4th place. Not a bad finish for the day we had!” – Johnny Angal 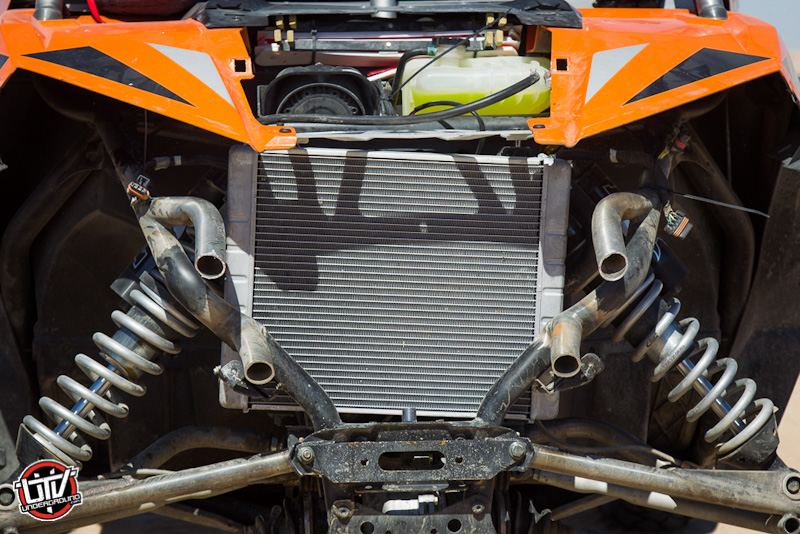 Thank  you to everyone out in the heat of the Imperial Valley who represented UTVUnderground.com. We hope you know how much that means to us and how much it motivates us to keep doing a better job for all of you from the coverage side! Keep up the hard work and we will see you all in November down in Mexico for the SCORE Baja 1000!! 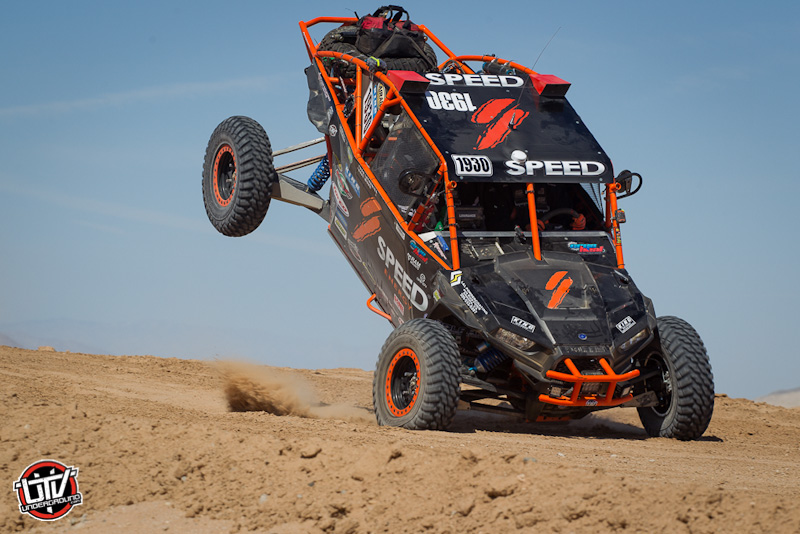