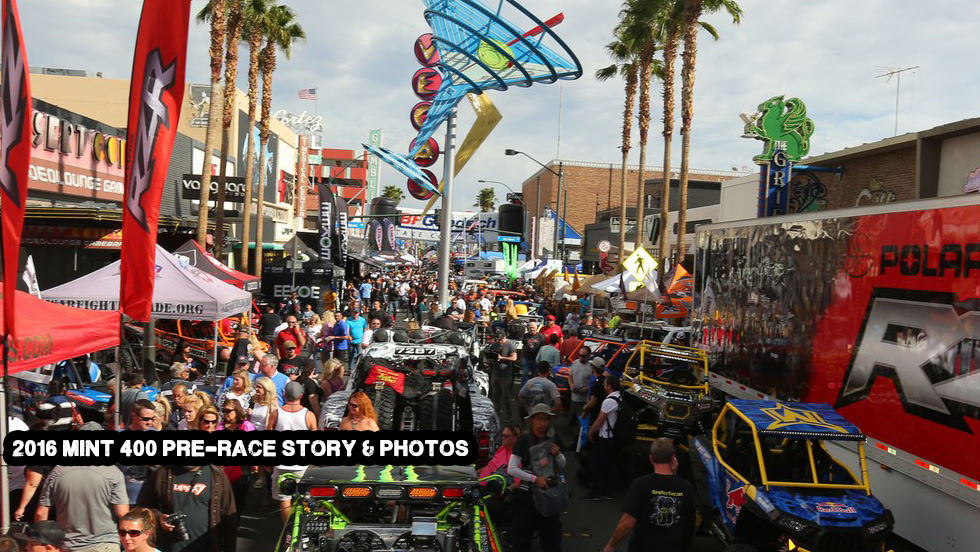 Mint 400 Kicks off with Contingency Event in Las Vegas

Las Vegas (3/11/2016) – The Best in the Desert Series Polaris RZR Mint 400 Contingency event was held today on Fremont Street in downtown Las Vegas. Thousands of fans turned out to see their favorite athletes parade their machines through the street and check out the largest gathering of off road vendors this season.

Presiding over the festivities was newly crowned Miss Mint Jade Werline. Werline beat out a large group of young ladies, including side by side racer Katie Vernola, to pocket the $5,000 award.

Fremont Street was packed from 8AM this morning till dark with racers parading through the tech with a packed crowd of spectators checking all the race vehicles along with all the vendors lining the streets with every type of product offroad enthusiast could ever want to buy.

We had a chance to talk with several of the racers today including defending 2015 Mint 400 Champion, Dustin Jones, and he’s looking for the repeat this year. He was astounded by the number of racers entered in the race.

“It was a huge feat to win last year, considering the amount of fast guys out here,” said Jones. “The fastest guys in the country are out here and the class is even bigger than last year, so a win out here would be amazing. We didn’t drive 20 hours to lose, so we’re going to put out our best effort to get a repeat of 2015.”

Johnny Angal led nearly every mile of last year’s race, except for the final one. He fell back in the field with engine issues. He is confident that won’t happen again this year.

“I’m hoping for redemption this year,” said Angal. “We were so close to the finish last year when we broke. This is the Great American Off Road Race: The Mint 400 so it would be honor to win it. It was tough to be that close and not bring home the win last year. We’re ready this year. We know the course pretty well. Our car is ready. We should be able to do it.”

Angal will certainly rack up some miles as he’s also entered to run the Unlimited Truck race immediately following the side by side event.

“I’m doing two laps in the 6100 truck,” said Angal. “Craig Scanlon is going to run the last lap. It depends on what happens in the RZR, and how much time it takes. Either way, I’m still doing 440 miles in the two vehicles, so it’s going to be a long day.”

With a full season of desert racing under his belt, RJ Anderson is ready for action. Anderson finished second in last year’s race, in his BITD debut.

“I’m stoked to be back here,” said Anderson. “Last year was my official first desert race, so to come home second was pretty awesome. Hopefully we can knock it up one spot this year. The Contingency is rad. The Mint 400 is second to none. I think a lot of organizations can learn from the way BITD does this. There are a lot of vendors and everything is top notch.”

Kristen Matlock finished second in class and third overall at the UTV World Championship, which was her first BITD race in a SxS, and she’s ready to build on that momentum.

“I’m super excited,” said Matlock. “Because I finished so well in the last race, I get to start third off the line. I’m just hoping to stay up front and finish off the day.”

TerraCross Championship Promoter Joe Duncan was here talking to sponsors and drivers. He’s looking for big things from one of the Nation’s most competitive side by side racing series this year.

“We have some big announcements coming for TerraCross,” said Duncan “We’ve been working on some things for the last five months and we’ll have some announcements soon. Once that happens, you’ll see our partner announcements, athletes, class structure and a lot more information.”