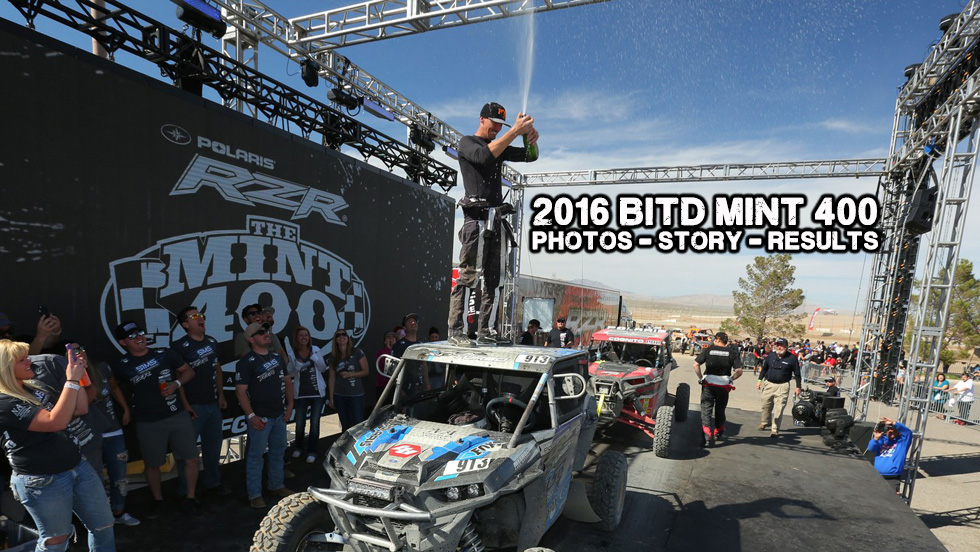 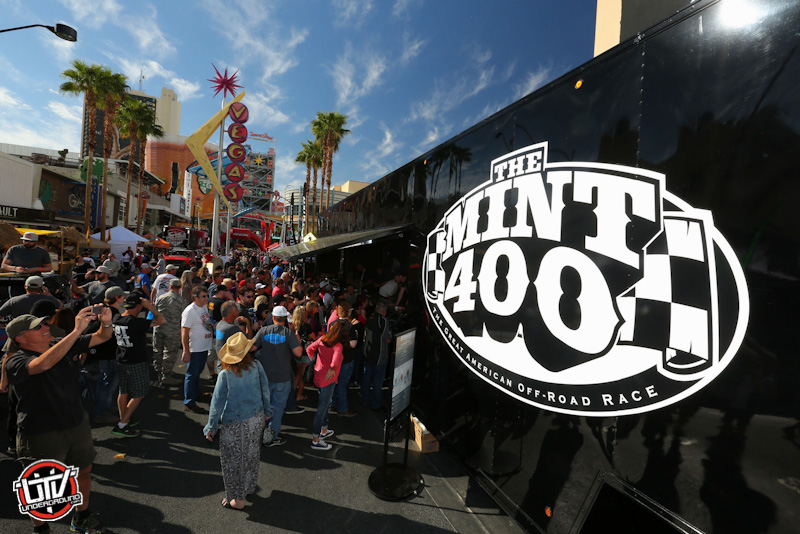 The 2016 Polaris RZR Mint 400 presented by BFGoodrich Tires has come and gone. By all accounts this was the grandest Mint 400 of all time and as I sit back and reflect it certainly was the biggest one I have ever attended. From contingency to the evenings festivities to the racing, it was everything it was hyped up to be and we couldn’t be more stoked to have been there to witness and participate in this years event. We would like to extend a massive congrats and thank you to The Martelli Brothers, Mad Media, and Best In The Desert as well as title sponsor Polaris RZR, presenting sponsor BFGoodrich Tires and all of the other sponsors who helped make this event what it was. Its a pretty special thing to watch this event come together and to see Matt & Josh Martelli as well as their team at Mad Media pour their hearts and souls into the Mint 400 to make it what it is today. I hope everyone in off-road can appreciate the efforts like we do.

On behalf of UTVUnderground.com we want to thank all of the racers, sponsors, teams, fans, enthusiasts, media, friends & family who support UTVUnderground both on and off the race track. The love you all show our site and show our class in general is just beyond compare. I am honored to have attended and spent time with so many of you this past week. I am already excited for 2017 and to see just how much further this dream team at Mad Media can push this event!!

Lastly, thank you to our team who helped us cover the event especially Harlen Foley of ATV Riders who worked tirelessly this week to provide us with some great stories and images. There is a ton more coming and you can see other race highlights and information at www.TheMint400.com 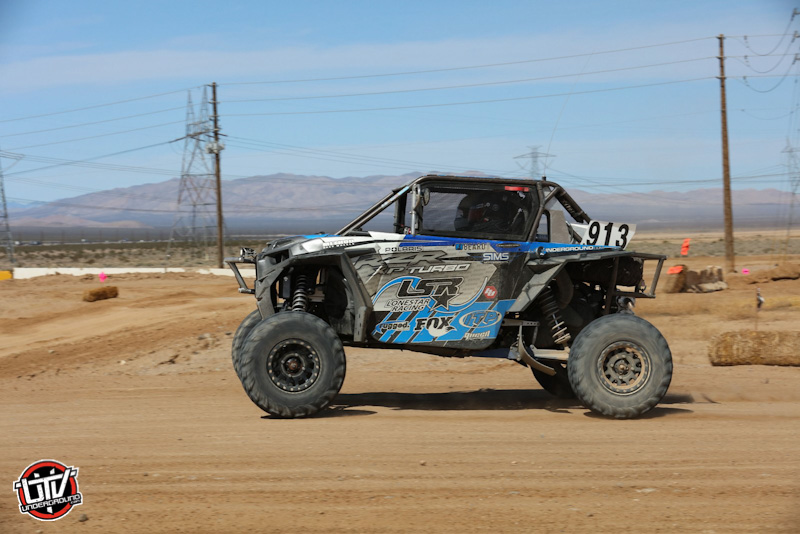 Primm, NV (3/12/2016) – Branden Sims and Justin Lambert won their respective side by side classes in the Polaris RZR Mint 400 presented by BFGoodrich Tires, Round 3 of the Best in the Desert Series. Sims finished first overall in and won the Pro Turbo UTV Class, while Lambert pushed his car over the finish line to win the Pro Production Class.

As always, the Mint 400 was certain to be a test of man, woman and machine. Some overnight rain helped keep down the dust especially at the start, but that didn’t mean it was easy. While visibility was clear, the three-lap, 330-mile race was run in reverse from past years, adding to the already daunting challenge.

Sims took the overall lead on the second lap and then held off Lambert to take the overall victory. Wayne Matlock finished second in the Pro Turbo Class, followed by Ryan Laidlaw, brothers Jason and Derek Murray, and Logan Gastel.

“We ran with the Redlands car for a while and we swapped positions a couple of times,” said Sims. “He blew a belt right in front of me. I was nervous about blowing a belt myself, so when we pitted right before the final lap we changed the belt. The car felt fragile on the final lap, so I was just trying to run a pace and keep it together. Then Justin Lambert came up behind us and ran us all the way to the end.

“This was a like a new course to me this year,” added Sims. “We usually run clockwise and this time we ran it counter clockwise. I remembered certain sections, but it was still a new race to me. This is the one I wanted because this is the big one for Best in the Desert.”

But the real story may well have been Sims’ gracious show of sportsmanship at the end of the race. After finishing, he noticed Lambert and his co-driver pushing their RZR toward the finish. He and co-driver Justin Krause came to their aid and helped them push their car across the line.

“After we finished, I looked back and saw him pushing his car, so I asked a BITD official if I could help him and he said I could,” explained Sims. “So we helped him across.”

Matlock chose to run slowly at first, followed by a charge at the end. However, mechanical issues on the final lap slowed his charge and put him in second at the end.

“I wanted to take it easy on the first laps, see how it played out and then make a push,” said Matlock. “After the second lap, we lost 10 minutes, so that bit me in the ass. I had some more flat tires, belt failure and a broken clutch.”

Laidlaw backed up his victory in Round 2 with a third-place finish. It was only his second race in the Turbo Class in his new Polaris RZR Turbo.

“We finished third, which is a good day at the Mint,” said Laidlaw. “We had a really good start, but we lost a couple of belts, which took a little of the edge off. The course got rougher as the day went on, but we had a really good time.”

Jason and Derek Murray celebrated their 41st consecutive finish with a fourth-place effort in their Can-Am Maverick. Derek Murray started the race and handed it over to Jason for the final lap. They credited their consistency to great equipment.

“These Can-Ams rock,” said Jason Murray. “Not only are they fast, but they are reliable. These things take a beating out here. What we do in a day, a consumer will do in four or five months. This puts us second overall going into Laughlin. Hopefully when the dust settles we’ll be in the championship.”

Derek Murray said they had planned to run a conservative pace with the hope to net a podium at the finish, which didn’t quite pan out.

“We settled on fourth, which is a little disappointing, but we’ll take it,” said Derek Murray. “The whoops and the rocks were everywhere. You got a little bit of everything: washes, lakebeds, whoops, and it was cool that we ran the course backward. We had zero issues all day.”

Logan Gastel, who had a rare DNF in the last round, was pleased to just finish, much less in the top five.

“We got all three laps in and we’re here at the finish line,” said Gastel. “I’m just glad we got a finish. We’re coming off our first DNF in five and a half years.”

In Pro Production, Justin Lambert pace himself and nearly took the physical lead from Sims at the end. Just an eighth mile from the finish, the belt in his ride shredded, forcing him to push his way to the finish. The Production Class victory was Lambert’s third straight in the BITD title chase. Kristen Matlock finished second, ahead of Benjamin Bischoff.

“We caught Branden Sims right at the end, but we knew we weren’t going to beat him,” said Lambert. “We broke, so Mitchell and I started pushing the car. It’s not as easy as it looks. Pushing a 1,900-pound car with two guys after six hours in the desert is tough. We pushed it about halfway to the finish line. We took a break, and just then Sims and his co-driver ran over and helped us push it the last little bit to the finish.”

Kristen Matlock, who is married to Wayne Matlock, notched her second consecutive runner-up finish in the Pro Production Class. Second in the Mint 400 is an awesome feat in itself, but it came in Kristen Matlock’s second BITD start and third UTV race…ever!

“I took it easy on the first lap, then I picked up the pace,” explained Kristen Matlock. “I was really concerned about breaking, so I took it a little slow. I can’t believe this. I’m so excited. My husband had a great race. He finished second class. We both finished second, we finished the Mint 400 and I’m super happy.”

Bischoff made the long drive from British Columbia to compete in the Mint 400. He came away with his first desert racing podium.

“This is the biggest off road race in America,” said Bischoff. “So to finish on the podium is huge. The race went better than we expected.”

In Pro Unlimited, David Martinez carried the day in his Can-Am. It marked his first victory in the class.

“It was just an epic day,” said Martinez. “This was a long time coming and I couldn’t have asked for a better setting than the Mint 400. To put Can-Am on the top of the podium is amazing. We didn’t have one failure today.”

BITD will be back in action May 5-8 as it visits Laughlin, NV for the Method Race Wheels Laughlin Desert Classic presented by Canidae Tap It.