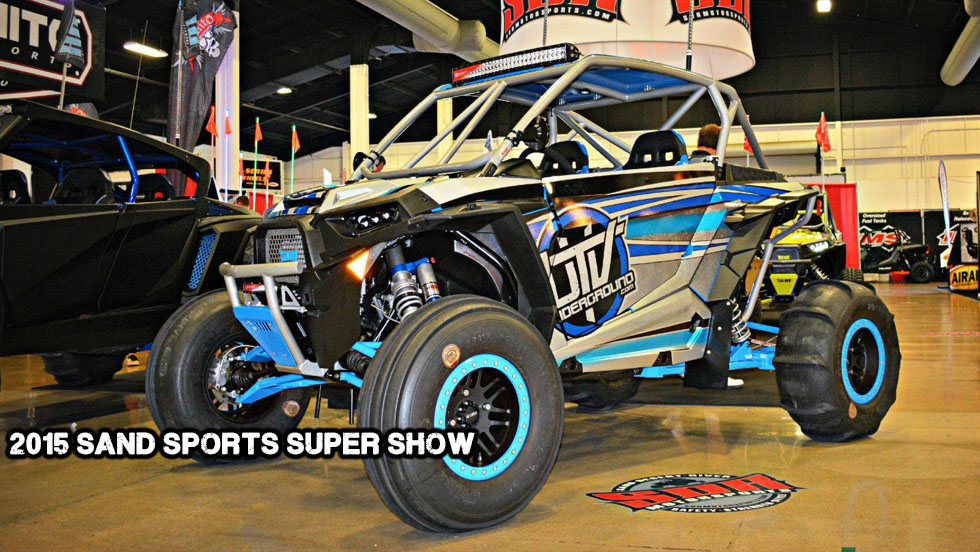 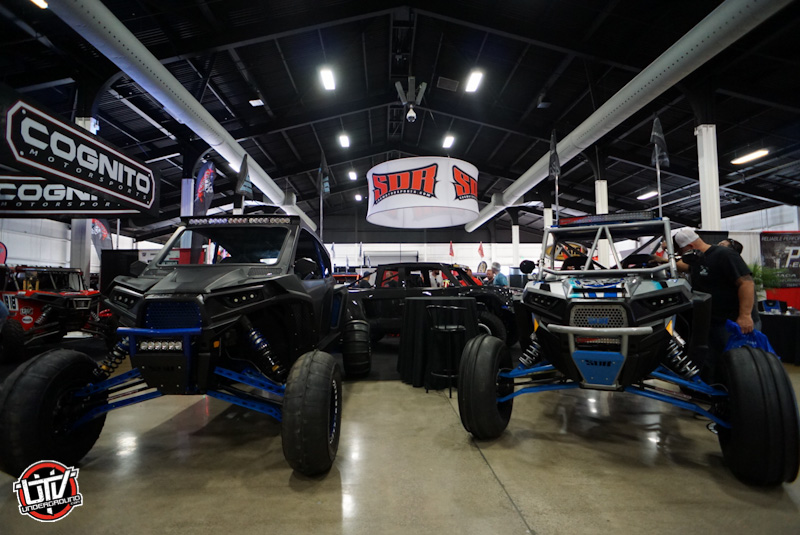 The 2015 Sand Sports Super Show (SSSS) has come and gone. Once again, UTVs dominated the show with the Polaris RZR certainly being the number 1 machine customized for display. But despite the RZRs popularity, the show buzz circulated around both the new Yamaha YXZ1000R and the Speed Energy/Robby Gordon lineup of Arctic Cat Wildcat’s. It was easy to see that Polaris has some competition rolling into the 2015/16 desert season and while they may have enjoyed the bulk of presence once again at the SSSS, it looks as if we may finally see some solid competition from the others by the time next years show rolls around.

There were only a few modified YXZ1000Rs on hand at the show but they all garnered some level of attention. Weller Racing and IMG Motorsports both brought out our 2 favorites while Alba displayed a turbo model they have been working on for the past week or so. Everyone wanted to climb in them, crawl over them and debate if it will in fact be the “Game Changer” so many claim it to be online. One things for sure, companies are not holding back on developing products for them. Already we are seeing suspension kits, wheel and tire packages, seats, and chassis mods being developed and we expect to only see more as we approach November. 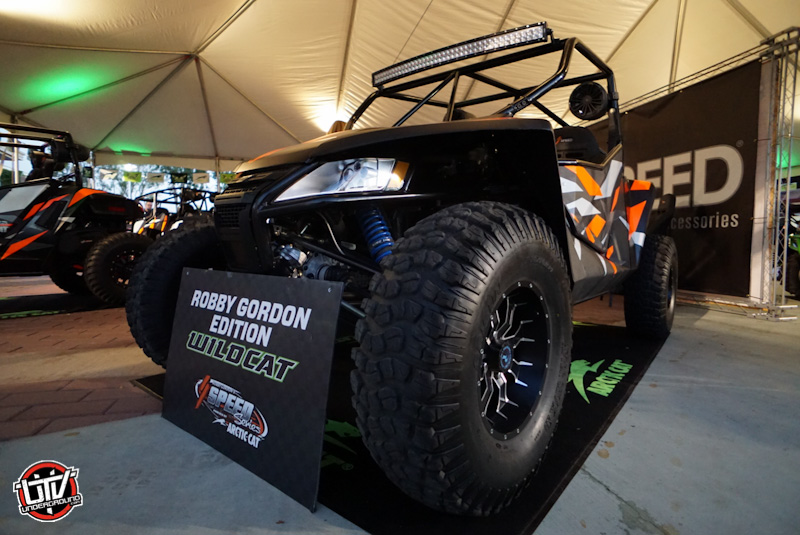 Arctic Cat for the first time put their new Robby Gordon developed line of accessories on display for the public to see. From redesigned trailing arms to new body styling, these new Wildcat’s certainly garnered attention. But the real push for Arctic Cat wasn’t their booth (which to me always seems to be in obscure part of the show in between where you eat and where the kids play in the fountains) it was the Stadium Super Trucks races where Arctic Cat now enjoys participating as being one of the title sponsors. As part of the Robby Gordon deal to help develop products for Arctic Cat, they also sponsor his off-road stadium truck show which travels around to venues and race events and puts on an off-road show using a spec’d truck designed, built and even raced by Robby Gordon himself. Their biggest show is at the X-Games where some of action and motor sports biggest names participate. But something new is coming to SST and thats the inclusion of a UTV class which will utilize spec’d Arctic Cat Wildcat’s for competition. Its Polaris RZR Terracross meets Robby Gordon SST with Arctic Cat and its a great idea and one Robby has been working on for a long time. It seemed as if SST had struggled to find the right partner until now and its exciting to see Arctic Cat finally getting some good attention again from the off-road racing community. SST hosted races all 3 days at the SSSS and even gave yours truly an invite to drive one of the new SST Wildcat’s in a race during the weekend. Unfortunately my schedule didn’t allow for me to play but from what I heard the races were fun and exciting.

While many talked about the vehicles at the OEM level, people don’t come to the SSSS to look at stock machines, they come for customization and there was plenty of it! From the LS2 Powered RZR XP4 that TMW built to the full carbon fiber truck bodied RZR XP4 that SDR put together, the industries biggest builders definitely brought out all the stops to draw attention to their brands and show everything they were capable of producing. TMW & SDR weren’t the only companies snapping necks with jaw-dropping builds, companies like ProLineWraps, NextLevel Aluminum, Madigan Motorsports, Magnum Off-Road and Grounded 4 to name a few were certainly holding their own and showing the off-road world that there is a ton of variety when it comes to quality builds and selection. 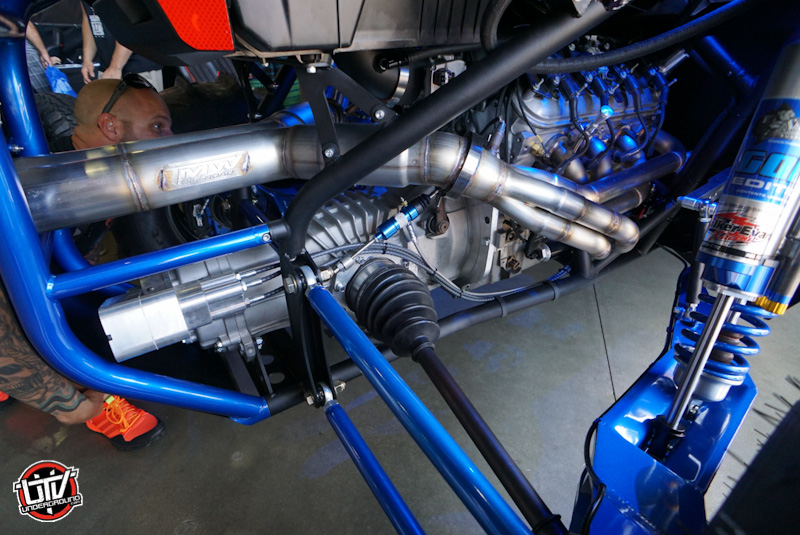 The SSSS is known as the place for companies to introduce new products to the sport prior to the kick off of the west coast riding season. Some products really grabbed our attention like the new SB Filters “Particle Separator”. This device works in conjunction with your factory or aftermarket intake system and borrows technology from helicopters. Essentially as you ride into dusty, sandy or silty terrain, the SB Filters product will separate the debris from the clean air passing into your engines intake eliminating a ton of the power robbing debris entering your intake system and prolonging your filters life. It seemed as if everyone had something new to show whether it be a new roll cage design, suspension kit, seat or light. What makes this show so cool is all of the new and exciting stuff you see.

We were stoked to have a few machines on display around the show one of which was our brand new SDR Motorsports built 2016 Polaris RZR XP Turbo. Our Turbo featured many new products including the NEW SDR Hi-Bred +3 suspension system, NEW Walker Evans Racing 2.5″ Velocity Series Shocks, NEW WhipTech LED accent lighting and whips, NEW RacePak UTV dash, and NEW GMZ 30″ Sand Stripper Tires. Our blue and silver Turbo was a show hit and many wish it was for sale according to the guys at SDR! Sorry guys, this ones ours for now!! 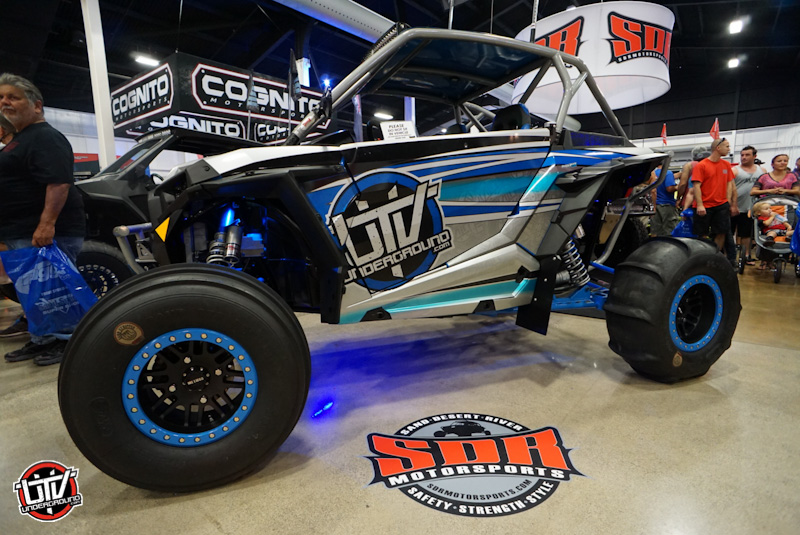 In addition to our new Turbo on display in the SDR booth, we had a couple other awesome machines. Our 2015 Can-Am Maverick Max built by Madigan Motorsports that we call the ENZO was on display in Madigan’s booth. This desert themed pre-runner always gathers a ton of attention due to its totally unique and over the top look. Those who run the hard pack desert terrain can’t help but fall in love with this bad-ass build! In our very own UTVUnderground booth we had our brand new CageWRX built 2015 Polaris RZR XP1000 desert race machine on display. This was the first time anyone outside of our team got to lay eyes on our bad ass new race RZR.

We love to ask the question to people on what their favorite machine or product was at the show and we know its so hard to choose just one. Of course we love our new Turbo and to us that was our highlight vehicle. But outside of that to pick one machine would be very difficult. But if I have to select one I would say it would be a toss up between the new SDR RZR with Carbon Fiber GlazzKraft truck body or the TMW LS2 Powered RZR. I pick those two not to be trendy but because of their innovation and craftsmanship and while very few would ever spend the time or money to recreate these machines, its the cool factor of pushing the envelop of our sport that I think makes them the stars of the show. Now sure, there were a ton of insane machines and I could make a case for many other UTVs that were on display but these 2 vehicles gave us exactly what we expect from the SSSS! 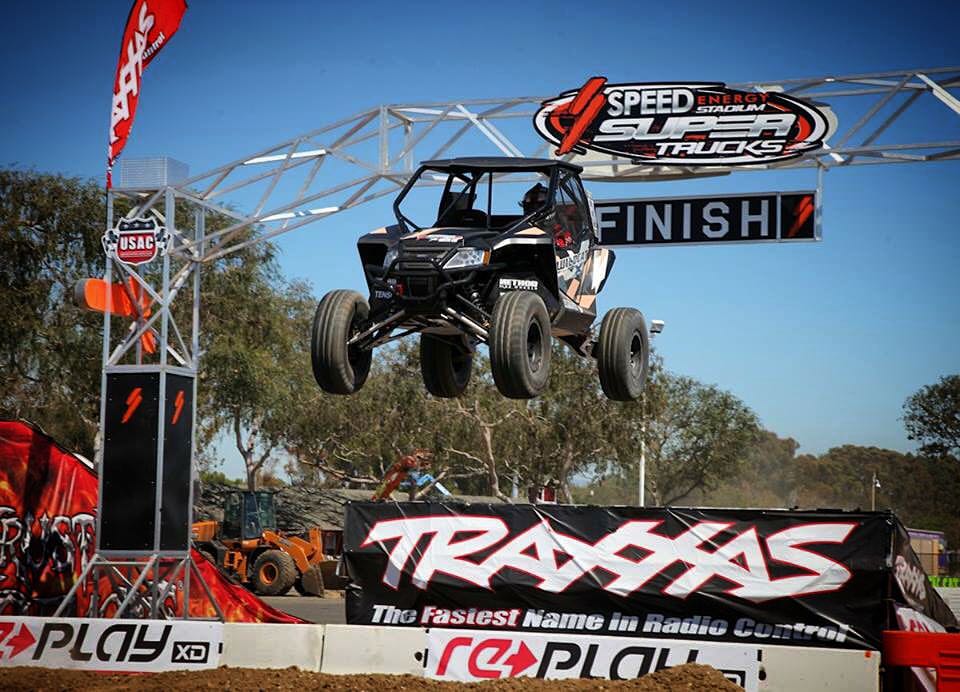 Once again I would like to personally thank each and everyone of you who came by our booth, stopped by to say hello, purchased some merch and supported our growing site. We have come along way since our first SSSS in 2009 and its an event we look forward to attending each and every year. So thank  you very much to all of you for making this year one of the best yet!

I want to also thank the entire Sand Sports Super Show staff for making this the best year in terms of moving in and out and for organization. They did a fantastic job and this show is not just a fun one, but its important for our sport and continues to be a major part of our riding culture. So thank you to everyone who plays a roll in making this show the best off-road show in the world!

Now that the SSSS is over, its time to get those machines prepped and ready because Camp RZR Glamis is coming and we expect to see all of you displaying in the Show & Shine competition!!

See you in the dunes.. 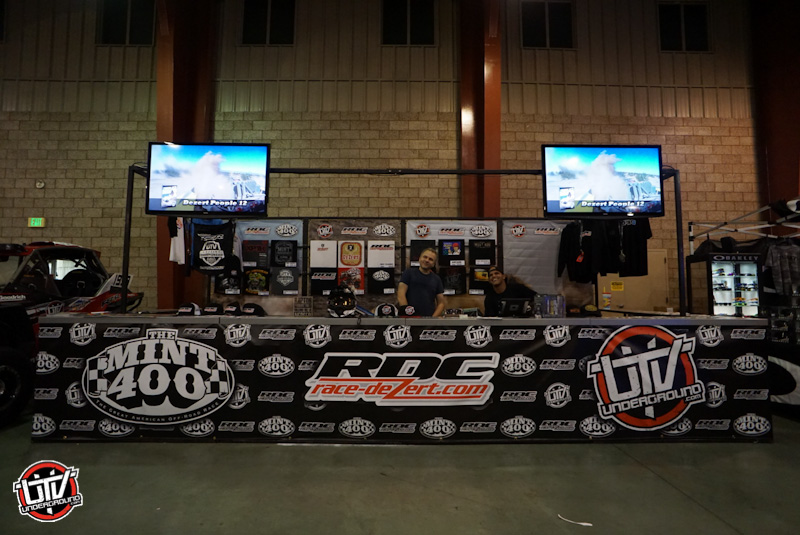 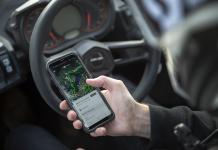