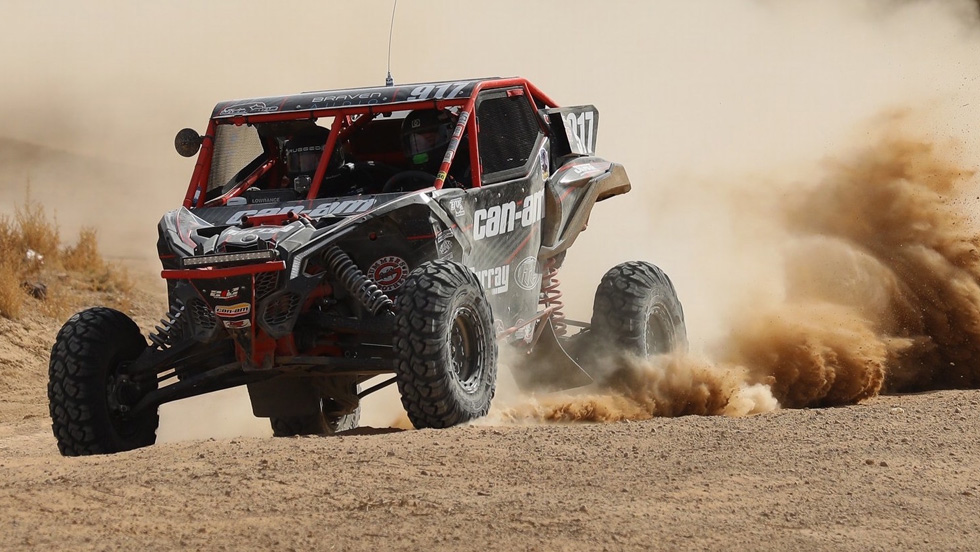 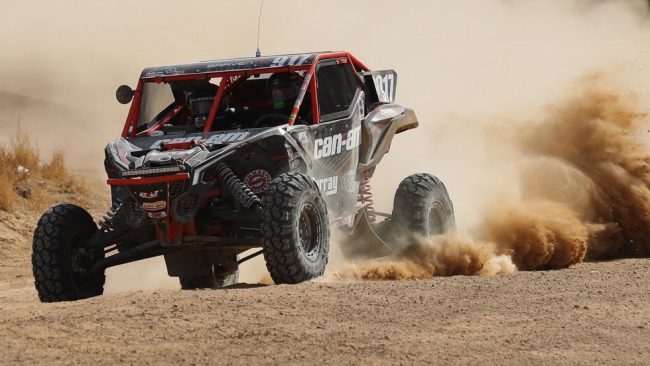 Side-By-Side Vehicle Racing
The Can-Am side-by-side vehicle racing team competes on racetracks across North America, in several different series. The team returns as the reigning champion in the GNCC XC1Pro UTV, SCORE International Pro UTV FI and UTV Rally Raid Pro Unlimited classes. Team racers will also compete in other series, including the Best In The Desert (BITD) series, The Off-Road Championship (TORC) and the King of the Hammers (KOH) race.

Can-Am will field several desert racing teams inside the Can-Am Maverick X3 Turbo R side-by-side vehicle. The impressive list includes Derek and Jason Murray (Can-Am/ ITP / Murray Brothers), who are known as the most consistent desert racing team in the series, having now finished 47 consecutive BITD races. The Murrays, who won the 2016 SCORE International Pro UTV FI title, will continue their double-championship pursuit in both desert racing series. Logan Gastel also competes in a Maverick X3 side-by-side vehicle for Can-Am in the BITD series, where he’s coming off of a fifth-place class finish in the Mint 400.

New for 2017, is the addition of Monster Energy / Can-Am drivers Matt Burroughs and Marc Burnett, the latter of whom is making his return to Can-Am behind the wheel of the wild Maverick X3 side-by-side vehicle. The passionate and jovial driver Dustin Jones (Can-Am / S3 Racing) also returns with his #noliftshift approach and popular “Visions of Victory” post-event racing video series. The cool, calm and collected Can-Am / Desert Toyz front man Cory Sappington will continue his Can-Am/ Maverick desert racing efforts in both BITD and SCORE International competition. Aftermarket juggernaut, innovator and dedicated racer Dan Fisher is also on Team Can-Am, competing in his Lonestar Racing-backed Maverick X3 MAX vehicle.

Can-Am also fielded an all-new group of racers to compete in the King of the Hammers (KOH) in the Ultra4 Racing, of which it is the official UTV of the series. Casey and Cody Currie (Monster Energy / Can-Am) and Chad Hughes competed at KOH in Maverick X3 Turbo R side-by-side vehicles.

Last season, Kevin Cunningham piloted his Can-Am Renegade X xc 1000R to his first GNCC championship. He’s already off to a great start in 2017, having won the first two 4×4 Pro class events. During his championship effort, Cunningham also ended Bryan Buckhannon’s impressive championship winning streak. From 2008 to 2015, Buckhannon had won eight titles, which included the first two 4×4 Pro class titles. In fact, he has finished no worse than runner up in any 4×4 class aboard a Can-Am since 2007, making him the most successful Can-Am 4×4 racer of all time.

Rob Smith and Jordan Phillips, who have each notched numerous podiums and also overall victories in their career, will also join Cunningham and Buckhannon in the 4×4 Pro ranks this season.

2017 Can-Am ATV and Side-By-Side Vehicle Contingency Program
BRP’s Can-Am Off-Road division will once again support Can-Am ATV and side-by-side vehicle owners by offering its industry-leading Can-Am Racing Contingency and Amateur Support Program for 2017. Racers who compete on approved vehicles in an appropriate series in North America can be eligible for cash payouts throughout the 2017 racing season.

Contingency cash is paid out in numerous U.S. national and regional racing series for both ATV and side-by-side racing. Those series include the Grand National Cross Country (GNCC) series, Best In The Desert (BITD), SCORE International desert series, King of the Hammers (KOH), World Off-Road Championship Series (WORCS) Championship Mud Racing (CMR), Mud Nationals, and many more regional series across North America. For the 2017 season, select events now have more contingency money reserved per race provided the minimum amounts of entries compete at each event (see details). And a qualified racer can potentially earn additional championship contingency money if he or she wins the class title in an authorized series in an eligible Can-Am vehicle.

Eligible Can-Am racers can earn $5,000 USD for a first-place finish in the BITD and SCORE International UTV Pro Production Turbo class of each series at each event and an additional $7,500 USD for securing the championship in the same class. ATV races can secure up to $1,500 USD per racing victory in the GNCC series (4×4 Pro only) and the BITD and SCORE International series (Quad Pro). A championship in any of these premier racing series will earn the Can-Am champion another $3,000 USD.