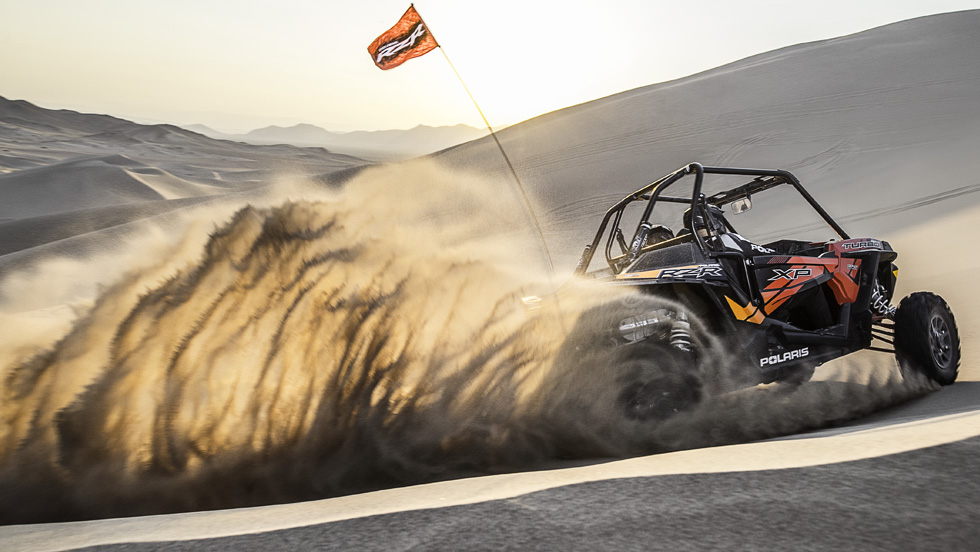 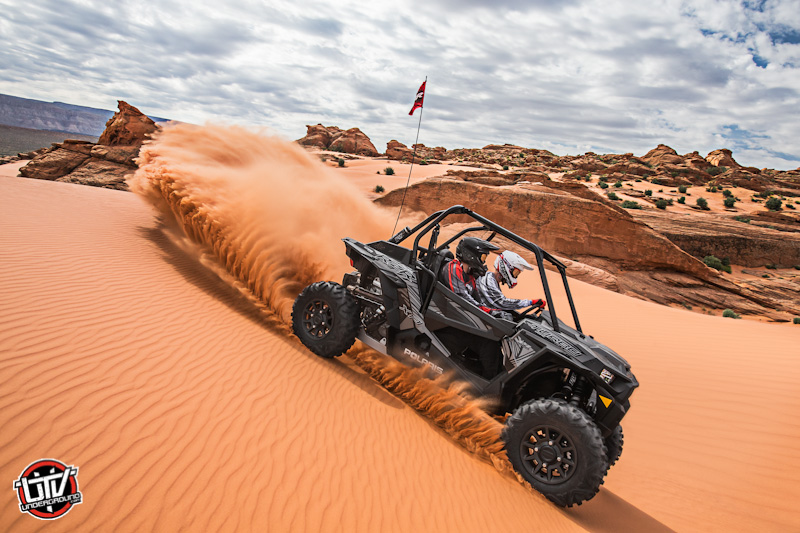 After a delay in launching Polaris has finally pulled the trigger on releasing the all-new 2017 Polaris RZR XP Turbo! It has been a rough year for Polaris both with the recalls and introduction of machines from the likes of Can-Am and Yamaha, but Polaris has stayed the course vowing to not only continue to introduce new and improved products but remain at the forefront when talking about horsepower and suspension. Now, from the outside, the all-new 2017 RZR XP Turbo may look a lot like the 2016 XP Turbo, but when you really break it down Polaris made some strong improvements both to enhance performance and reliability.

The new 2017 RZR XP Turbo now packs a whopping 168hp power plant and having driven it, I can tell you that this is the most powerful RZR ever developed. Polaris beefed up the engine to handle the additional boost, they also improved the clutching to allow for stronger engagement and better cooling. Now when jumping in and out of the throttle under load you can actually hear the Turbo blow off valve dumping the boost, it sounds like a slight squeak at first but then you start to realize that its just the engine telling you to go harder! Acceleration is hard, there is very little turbo lag in the new 2017 which was something many didn’t like in the 2016 model. Polaris also introduced a new and stronger CVT belt to go along with its clutch improvements. 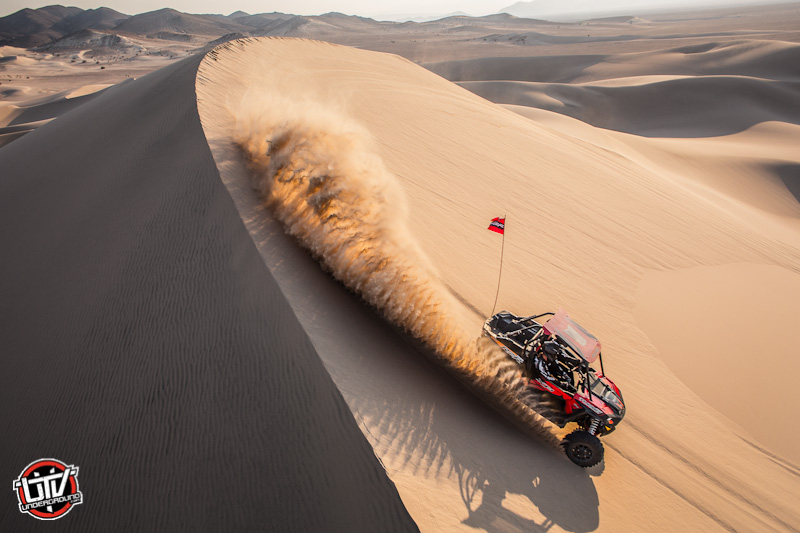 In 2016 the talk for us southwest dune riders was cooling, it was very hard to keep our 2016 RZR Turbo’s to run cool when pushing them to the limit in the soft and heavy sand dunes. Polaris took the machine back to the drawing board and re-engineered the cooling system to now keep the machine running within a reasonable cooling temperature when under long and heavy loads, something that happens regularly when you are running through big rides in the dunes. We pushed the 2017 RZR XP Turbo to the limit for long periods of time in the Dumont Dunes in the dead of summer. Surface temps pushed 130 degrees fahrenheit yet the RZR never once over heated. Trust me when I say, I was trying to get this thing into limp mode and the RZR just kept on pushing. To help with cooling Polaris increased the size of the front grill area allowing for more airflow to reach the radiator and intercooler. They also put in a much larger radiator to assist with pushing more coolant through to the engine. While we still question why the engineers still like placing the intercooler in front of the radiator, for 2017 their design seems to now work much much better!

Airflow has also been improved to the engine and CVT by adding larger intake scoops to the bed. Traditionally these rear bed mounted intakes has been sleek in design and only allowed air flow through the outside of the scoop, but now Polaris has increased the size of the scoop and opened the backside up as well allowing for even more air in and out of the engine and CVT.

You can’t increase horsepower and not work to improve upon handling. Now while many will still make claim that the improvements Polaris made still aren’t as earth shattering as say the new X3 from Can-Am, remember, the RZR XP suspension is pretty damn good and never has been a weak point. But Polaris still found ways to add to the handling and performance of the new 2017 RZR XP Turbo by installing a close ratio steering rack and improving upon tie-rod geometry. Now you can get the machine set up for a turn without having to cross over the wheel too much and it makes the handling of the machine feel very precise and much easier to drive at higher speeds and especially when navigating into the tighter terrain. You will also notice much beefier rear radius rods which should make almost everyone happy to see!

There is much more to this new machine then most will probably give it credit for. Reality is, RZR is still King for the time being and while Yamaha and Can-Am are certainly giving chase one thing Polaris made clear to us is that they are not slowing down. While this RZR may not seem to be the answer to the X3 that the blood thirsty fans of the UTV world want you have to remember that the X3 was Can-Am’s answer to the RZR XP. While the Maverick of old was decent, even their racers admitted that the suspension and handling could never hang with a Polaris and the results in desert racing and short course proved that to be true time and time again. With that said, the X3 now has given Can-Am and their racers something to really be proud of and it has also given Polaris something to feed off of. In a conversation with an employee at Polaris recently I was told to not go to sleep thinking that Polaris is any where close to satisfied. They have vowed to not only improve the quality issues that plagued them in the 2016 model year, but also vowed to remain on the gas as it pertains to innovation and development. Like the launch video says, they are just getting started. I guess for those of us who thirst for more power, more suspension and more innovation, we should be pretty stoked!! 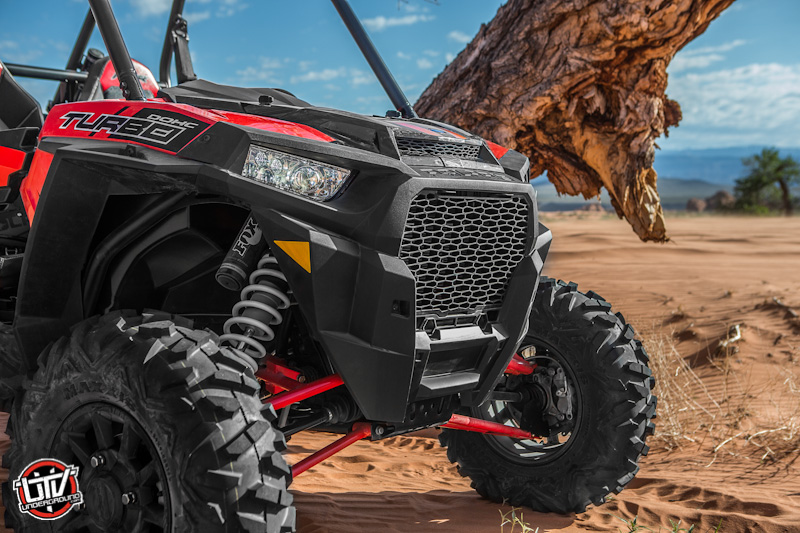 Minneapolis, Sept. 16, 2016 – Today, Polaris RZR sets another new standard in razor-sharp performance with the introduction of the RZR XP Turbo EPS and RZR XP 4 Turbo EPS. Featuring a new ProStar® Turbo H.O. engine that unleashes 168 horsepower – the most power ever offered on a factory side-by-side – the vehicles offer 15 percent more power than last year’s models and 9 percent more than anything else on the market.

To match the horsepower upgrade – and significantly improve on 2016 models – the 2017 RZR XP Turbo models feature new, high-capacity cooling, and a stronger driveline to get that power to the ground. The high-capacity cooling includes a new, more powerful, variable-speed, brushless fan coupled with a new, 40-percent larger, high-flow front grill and a 20-percent larger engine radiator. The new cooling ensures the engine can breathe for maximum power delivery.

The RZR XP Turbo EPS and RZR XP 4 Turbo EPS boast the most premium suspension, with exclusive FOX Podium® Internal Bypass Shocks that deliver the plushest ride and best handling found on a side-by-side. The shocks generate progressive damping force that gives the vehicles a smooth ride with all the bottom-out resistance expected from ultra-performance off-road vehicles. Large-diameter shock bodies (3-in/7.6 cm rear, 2.5-in./6.4-cm front), adjustable remote reservoirs and increased fluid capacity provide dramatic improvements in heat dissipation, fade resistance and durability. By using five compression zones to provide progressive damping as the shock gently absorbs bumps and stiffens to prevent bottoming, the Internal Bypass Shocks feel like five shocks in one. Combine that with three zones of rebound damping to minimize pitching, plus harsh top out for an ultra-plush ride and better handling over a wider range of terrain at any speed.

The RZR XP Turbo EPS and RZR XP 4 Turbo EPS will be available in late 2016 in Titanium Matte Metallic and Cruiser Black. The two-seat model will retail for $24,999 U.S. and the four-seat for $27,499 U.S. Both models come with an extended two-year factory warranty when purchased before December 31, 2016.