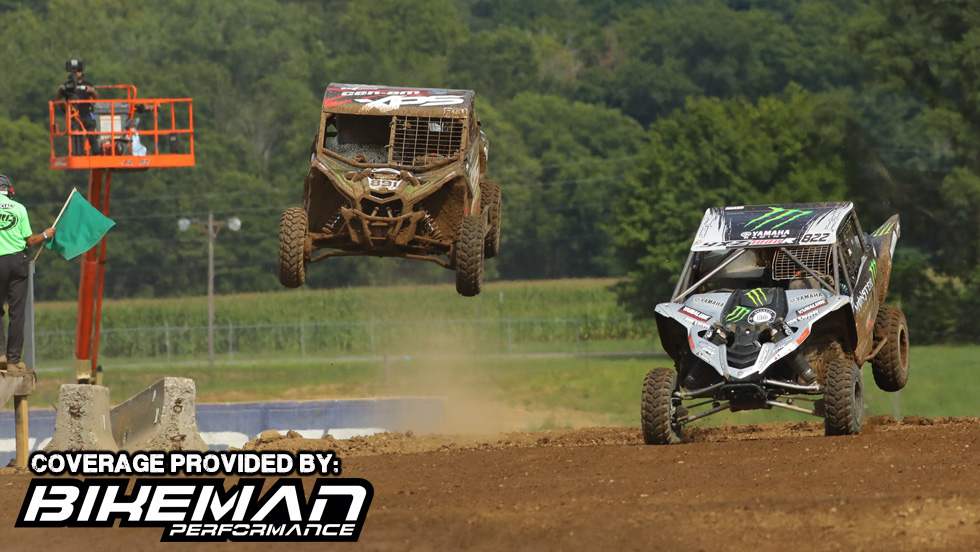 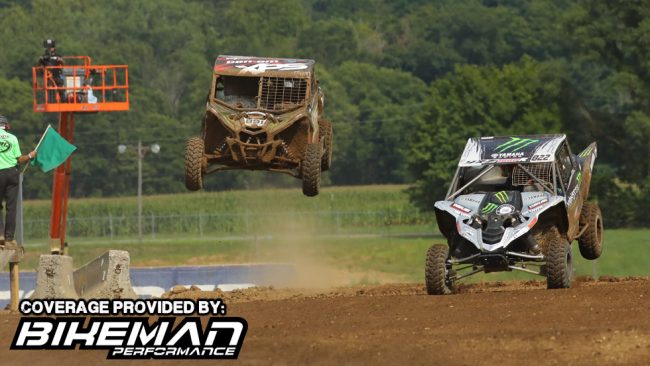 The races were held at the storied Redbud MX, though the track was purpose built just adjacent to the facility’s motocross circuit. The tight track featured eight turns, as well as jumps and a big uphill step-up. Weather was picture perfect both days with temperatures in the mid-70s and partly cloudy skies.

In Saturday’s Pro Modified race, Van Eperen inherited the lead from Jason Luburgh on lap eight when Luburgh had a mechanical issue in his Polaris. From there, he held off Greaves to score the victory, his sixth this season. Greaves finished second in his first Pro Modified start this season. Kyle Chaney finished third in his Can-Am, while Elliot Burns and Thomas Reihner rounded out the top five. Tim Farr had led the first six laps in his Can-Am before retiring on lap six with mechanical issues.

“We have a little more motor than CJ and I’m not oblivious to that, but I’ll stand by my words that he is the single greatest driver in off-road racing,” said VanEperen. “So any time we can hold him off is a win for us. We have this thing dialed in and I have to thank Johnny Greaves, who tells us everything we need to do.”

Greaves fought his way from the back of the pack, taking fifth on lap two and second on lap seven. He battled Van Eperen during the final lap using a lapped car as a pick, but was just out powered at the line.

“We just need a little more for Horsepower Hill,” said Greaves of the track’s step-up section. “I was happy to just lose two lengths going up there. I just tried to make it up everywhere else. I thought I was going to get Rodney on the back on the last lap. That lapper got between us so I tried the outside to see what would happen. It was super fun.”

Chaney tangled with Treavis Poynter at the start of the race and started well back in the field. He recovered to finish third and protected his points lead.

“I just started picking off cars from there,” said Chaney. “At halfway, we were 15th, and I must have gotten lucky. I’m really excited and that was a really hard race.”

In Sunday’s Pro Modified race, Greaves held off a charging Chaney to score the victory, his first in the class in just his second start. Driving his father, Johnny’s, car, he hit the setup perfectly for the track conditions. Chaney finished second and now holds an 13-point lead on Van Eperen in the points chase. Van Eperen finished third, ahead of Farr and Zac Zakowski.

“It just came down to car setup and choosing lines,” said Greaves. “Chaney was right there and he had spots he was gaining on me. It just came down to how my car worked versus his. I was able to maintain in the corners where he was catching me so I inched away. It was one heck of a race and these guys ran me super hard.”

Chaney tried everything to pass Greaves. Despite several runs into the corners, he couldn’t make the pass stick and finished second. One of those runs nearly cost him the race.

“One time I tried to stay with him through a section on the back side and I landed so hard it shoved my floorboard through the floor,” said Chaney. “It hit my brake pedal and I couldn’t brake. So I had to take both feet off and push the floorboard back out. My shocks just got too hot and couldn’t take it any more so I had to back down. I knew I wanted to finish and get a podium spot.”

Van Eperen had his own problems. After pulling up the line for the start, the power steering on his Yamaha stopped working. He muscled his car through the 10 laps to score the last spot on the podium.

“I can’t really feel my arms,” said an exhausted Van Eperen. “I was not going down like this and I wasn’t giving up. I want to apologize to Tim Farr. I was just holding him up. I was points racing out there and doing everything I could do. We’ll take third all day long in this situation.”

In Saturday’s Pro Stock race, Greaves had to work hard to prevent Zach Martin from playing spoiler. Martin, in a Yamaha, took the lead at the start and Greaves ran him hard into every corner. On lap seven, Martin made a slight bobble and Greaves pounced taking the lead. Martin then challenged Greaves for the final three laps, finishing half a length behind Greaves at the finish. Martin was second, followed by Jake Lunderby, Adam Reek and Blake Enroe.

“Zach was flying today and it came down to just one mistake,” said Greaves. “I knew I needed to keep the pressure on and wait for that mistake. It all depended on your line into the turn and how you got out. We were trying a few different lines, but the track was really one lane with how rough it got. We worked with what we had, he made one mistake and we capitalized.”

After losing the lead, Martin tried everything in his playbook to pass Greaves. On the final lap, he drag raced Greaves to the finish, just missing the victory.

“You can’t make mistakes when you’re running against class acts like CJ,” said Martin. “I got one shot and that was it.”

Lunderby turned a mid-pack start into another podium. The young racer has come on strong in the last few races.

“The track was fun,” said Lunderby. “You had to drive smart because there were a lot of holes out there. One mistake and you’d lose a lot of ground. We got hung up a little at the beginning, but we made up a lot of ground.”

In Sunday’s Pro Stock event, Greaves nearly saw his win streak broken as Lunderby was the class of the field. Taking the lead at the start, Lunderby consistently gapped the pack, until the final lap. Bicycling his ride three corners from the finish, Greaves pounced, taking the lead and his ninth-consecutive win. Lunderby was second, followed by Ben Enloe, Martin and Kenny Masch.

“I had to do everything I could and he had a couple of spots where I just couldn’t hang with him,” said Greaves. “I tried a couple of different lines and I just could not find the drive out of the corner that he had. There were only two or three spots where I was faster than him. I had to get really close in those spots and keep the pressure on.”

Lunderby dominated the race and hadn’t it been for that one mistake, he had the victory in hand. Lunderby continued to come on strong and scored his third consecutive podium.

“It’s nice to be out front and have clean air,” said Lunderby. “I made a mistake and he capitalized on it. CJ does that really well. The Greaves family are like my coaches and they are like family.”

Ben Enloe held off Martin for most of the race. He said luck had a lot to do with his first podium.

“I got lucky a few times,” admitted Enloe. “Luckily Zach stayed behind me. He was hammering me pretty hard. I kept looking in my mirror and said: ‘I just have to keep him back there and we’ll be good.’“

The TORC Series has five races at two venues remaining in the 2017 season. The series heads to Crandon International Off-Road Raceway in Wisconsin September 1-2 for a doubleheader weekend. A tripleheader caps off the season at ERX Motor Park in Elk River, MN September 23-24.