When the Sand Sports Super Show originally launched little did they know that it would become the most important show in the UTV market. What started as a show for mostly sand rail and off-road truck enthusiasts evolved to showcase every aspect of the Sand Sports industry. This year’s show, just like those before it, attracted visitors from across the country and the best vendors in the industry! As the popularity of sand sports increase the products and services available increase. Every year this trend is evident by the quality of products unveiled, the popular vendors who attend, the large crowds and the industry professionals who visit the three-day show. This year the Sand Sports Super Show was held September 14-16 at the OC Fair & Event Center in Costa Mesa, California.

Another indicator of the UTV markets rise is the continued growth and development of new UTV models each year, and several new models were recently released just before the show from Polaris, Textron, Can-Am, and Yamaha. Also, Nikola offered the public to check out their new electric offroad vehicle at the show as well this year. 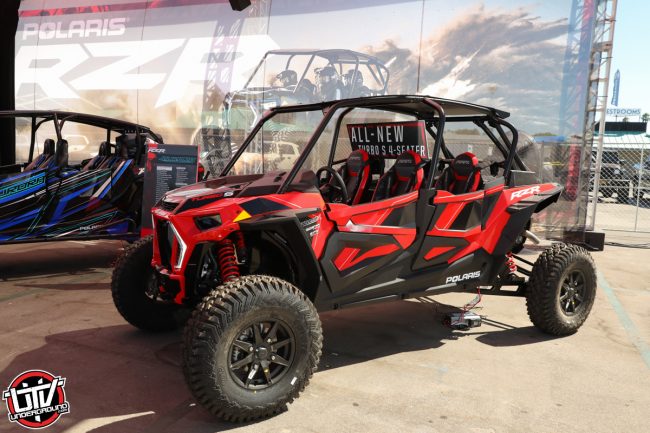 Just days before the show, Polaris announced the new Polaris RZR XP Turbo S 4, which was on display at the show, and several companies even had fully built machines on display. We had a chance to meet up with Evan Schendel from Polaris to get the details on the new four seater, “It has been a long time coming but the RZR XP Turbo S4 is finally here! It has all the cool stuff we launched on the 2 seater Turbo 2 including the new toughness technologies, suspension upgrades, 32inch tires and the cockpit changes. Polaris says the biggest engineering feat of the vehicle was creation of a new drivetrain, suspension and chassis,” said Schendel.

Yamaha was also showing the highly updated 2019 YXZ 1000R, which received several major improvements this year including changes to the transmission, roll-over bars and updated front end. The gear ratio has all been redesigned similar to their gear reduction kit so that low-speed (1st and 2nd) are going to be significantly smoother especially for those in the tighter riding areas. On the SS models, they re-did some of the mapping on the shifting points, so you don’t have those issues with the half-clutching creating a smoother and sharper shift. The roll-over bars are redesigned with really high off-camber angles allowing you to see through the bars easier. The front end has been redesigned to give you better visibility over the hood by moving the radiator to the back. The move also allowed more room for new lighting and the dual battery option. The larger radiator in the back comes equipped with dual fans and receives better airflow than ever before. The brakes have been upgraded to larger calipers and rotors along with a redesigned hub and stainless brake lines all the way around.

Textron also teased us with an all new UTV designed in collaboration with Robbie Gordon. Textron has worked with Robbie to create this Baja specific UTV that will inspire an all new Baja UTV from Textron. With only a few details available at this time we do know that this specific edition comes with a 72-inch wide travel kit that Robbie Gordon built. That’s a big increase from the stock width of 64-inches. Specific accessories, price, and release date are still to be determined.

Also on display at the Textron was the new 2019 Wildcat XX LTD which includes an aftermarket deluxe Bimini roof, front and rear bumpers and a half windshield. The Wildcat XX LTD comes equipped with a 130hp (5hp gain from 2018), 998cc Naturally aspirated EFI Engine. Textron’s Sport SXSs Product Manager, Mathew Fields gave us the heads up that the Wildcat XX LTD will be shipping to your loal dealer later this month!