This year’s Dakar Rally immortalized Californian Ricky Brabec as the first American to ever lock up a victory in the world’s most prestigious rally raid, as the Monster Energy Honda rider grabbed the motorcycle lead after Stage 3 and never looked back. But if you’re looking for a category where the stars and stripes really flew, look no further than SSV, as Casey Currie’s overall victory led a dominant year for the red, white, and blue.

After a fourth place overall finish last year and top rookie honors, Currie admitted to being disappointed with his debut performance. The South Racing Can-Am driver spent much of last year improving his rally raid skills, teaming with new co-driver Sean Berriman and winning Rallye du Maroc, the final tune-up before this year’s Dakar. He opened the event with a second place finish on the first stage, and first took the lead after Stage 3.

Despite yielding the top spot for a few days, Currie rediscovered his form after the rest day and seized the lead after Stage 7. From there, he never looked back, eventually extending the advantage to more than 39 minutes over Sergei Kariakin when all was said and done. Defending event winner Chaleco Lopez completed the podium.

The brand new Red Bull Off-Road Junior Team debuted in this year’s Dakar to plenty of fanfare, and proved its speed with five stage wins, but reliability issues plagued the squad from the very early stages. Blade Hildebrand’s hopes of a strong overall finish ended in the second stage with mechanical issues, but he ended his sophomore Dakar effort with two stage wins in three days and a second place finish in the final stage of the event heading into Qiddiya.

Mitch Guthrie Jr., meanwhile, had one of the most heartbreaking events imaginable in his Dakar debut. The defending Best in the Desert UTV Turbo champion scored his first stage victory in Stage 4 and cracked the top five going into the rest day, but mechanical issues coming out of the rest day ended his hopes. A second stage win came on Stage 10, but further trouble ended his event on the penultimate stage.

However, it wasn’t all bad news for Americans other than Currie in the overall standings. Like Guthrie, AJ Jones made his first trip to the event this year in another South Racing Can-Am and never fell out of the top 10. He ran as high as fourth after Stage 5, with top five finishes in six of the 12 legs of the event, before eventually settling into eighth overall at race’s end. 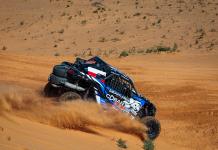