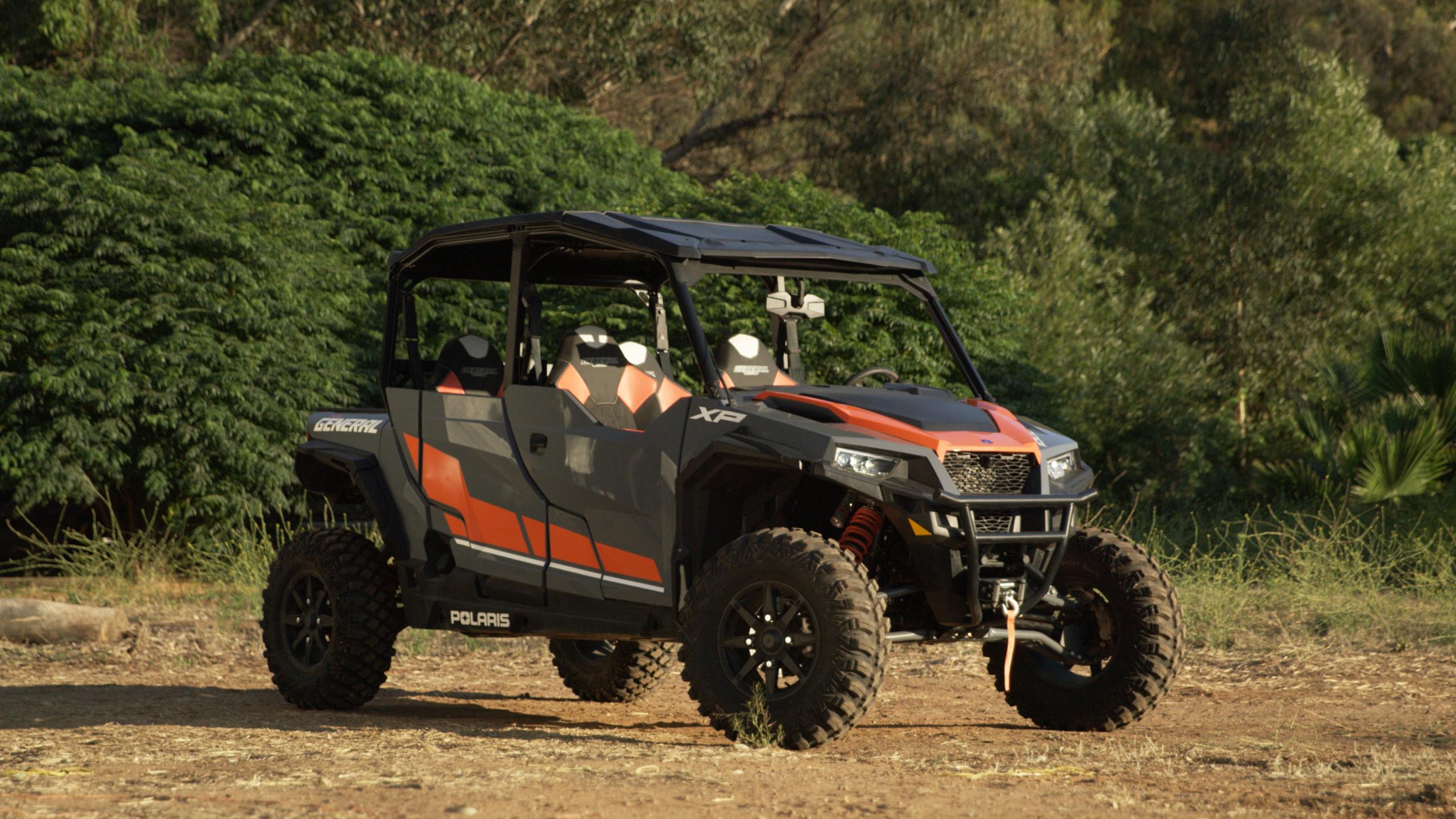 The Polaris General platform was first launched in 2016 and was a very smart combination of some of the award-winning technologies from both the Ranger and RZR side of the Polaris lineup. They were marketed as both a sport and utility UTV that was just at home on the trail as it was on the ranch. Sales exceed expectations and in 2017 we saw the first 4-seat edition come out. By 2018 the lineup grew to eight machines including a model with Ride Command, and things like a 4,500 winch became standard options. The 2019 lineup was streamlined back to just four machines but there were lot’s of improvements and refinements including premium paint.

This year we saw the lineup swell once again to seven machines including two Deluxe models – illustrating strong sales and the growth of the crossover segment. Models available include four 2-seat options ranging from $16K – $23K, and three 4-seat models starting at just under $22K and going up to $25K. Check out the specs for these cars listed on Ranger.Polaris.com if you want to do more digging.

Back in June Polaris shipped us a nicely broken-in Deluxe General with about 600 miles on it – in grey with some nice Dukes of Hazzard Orange! The Deluxe comes standard with a roof, 4,500-pound winch, and a Rockford Fosgate audio system. The four-seat General is 64” wide and just over 150” long. From the outside, it has the same look and feel of a nice four-door midsize truck, like a Tacoma crew cab. The 30” tires are what really set the General apart visually and they serve a purpose – they handle the trails and dirt better than anyone else in the crossover class. Everyone else is running 27” or less and we feel this is a huge advantage for the General. It’s by far the best looking vehicle in the class as well. The Yamaha Wolverine and Kawi Teryx4 both still feel too upright for our taste, and the Honda Talon and Can Am Commander Max are simply not as well refined on the exterior to us. The General also has the nicest dumping cargo box in the class right now just ahead of the Commander. This machine just feels like it’s ready to run right out of the gate. It’s very well proportioned and the exterior plastics feel rock solid to the touch. You can see and feel how solid the car is right away when you walk around it. Another feature we love is the accessory bar. This is something Polaris introduced a few years ago and it’s absolutely killer. It makes adding accessories light additional light bars and audio components a breeze.

The General has a 1000cc, ProStar 4-stroke engine with dual overhead cams and twin cylinders. It’s the same tired and true electronic fuel injected 100 horsepower motor and automatic on-demand all-wheel drive transmission that Polaris has had so much success with these past ten plus years. Most of the competition is at or near 1000cc and 100 horsepower – but Polaris does have the technical edge on the specs side. That being said it does weigh more than any other crossover UTV – coming in at 2K pounds. So some of that power advantage is equalized by weight. We’ll get into how the motor feels under a full load in a minute, but suffice to say this vehicle has a LOT of power and is very responsive, even under load. The towing capacity of 1,500 pounds and payload capacity of nearly 1,300 pounds means the General is ready for most hauling tasks.

The smoothness of a ride is really a combination of the suspension travel, wheel and tire size, shock setup, and clearance of the machine. And it’s here where the General really shines. The 30” Pro Armor tires, Walker Evans Velocity Series shocks, and Long Travel, High Clearance Dual A-Arms all combine to equal 14” of suspension travel which is best-in-class by 3”. This again is a feature that Polaris nailed and it surely comes from their R&D on the RZR side. We may end up seeing a Dynamix version of this machine down the road as well. The 64” stance makes the vehicle feel STABLE – but it’s not SO wide that you get hung up on tighter trails. We like the extra width but be sure to do your homework when measuring for Toy Haulers.

The interior of the General has come a long way. This Deluxe model features a Ride Command system and Rockford Fosgate stereo system which is great. We feel this should be standard on all machines as riding in a group with Ride Command is really a game-changer and everyone wants to listen to their music. The seats are firm, comfortable, and breathe nicely even in the heat. The doors are by far best in class because of their height and finish. They really keep the dirt and dust off your body without obstructing airflow. The steering wheel, steering column, instrument cluster, and gear shifter all feel robust, solid, and have a very logical layout. None of this is rocket science but you’d be surprised how many little things other OEM’s screw up!

So for the past ten years or so we’ve been very lucky to have access to some amazing property in Ocotillo Wells. It’s 90 minutes from our ranch and offers at least four distinct types of riding conditions; sandy washes, tight hard-packed canyon runs, wide-open desert hills, and some taller narrow mountain trail riding. It’s the perfect place to shake down a UTV – because we can beat on them and if we get in a pinch we’re not stranded in the middle of nowhere. We took the General Deluxe out on what ended up being one of the hottest days of the summer thus far and put it through its paces – and overall we were really really impressed with this vehicle.

One of the things we love about the General right off the bat is the seating position and the amount of legroom. We are constantly getting into and out of these machines with cameras in our hands and the General is by far the best machine we’ve found for doing that. It’s EASY to work out of, and comfortable on the rides. We also love the Cargo bed because we can load it down with tripods, sandbags, coolers, and all the stuff we need to film with. This machine just feels good to climb into, put your belt on and start driving. There is no window or door netting to deal with. There’s a navigation system and a stereo that syncs with your phone in a few seconds. The roof provides the shade you need. And things like the oversized rear view mirror and backup camera make maneuvering in tight spaces easier too.

We spent the day hammering on this General and one of our biggest takeaways was how well it handled the weight of four men and all our gear, with the heat, and still produced plenty of power. We hauled ass through the washes – occasionally bashing up or down one of the steeper sidewalls with zero issues. We flogged the motor and got her up to 60+ miles per hour which isn’t going to win any races but is still impressive for a 100hp motor in 120-degree heat! We even stopped and worked with the winch a bit to test it out and it was super easy to use. One thing we did notice after a few hours on the trail was a light vibration “whine”. It wasn’t real bad and was probably something in the exhaust that just needed tightening. But that was pretty minor.

When we took the General into the tighter narrow canyon runs it did GREAT. The suspension soaked up the whoops and the steering is so responsive that it was really fun to rip around. The guys in the back were not getting slammed around because we weren’t bottoming out. We were all actually really surprised at how well the machine did in those conditions. Smaller tires or less clearance would have made for a much bumpier ride and sore backs. The 64” stance kept us from feeling like we were tipping over, but the General also doesn’t feel too long like some of the 4-seat sport models. It feels snappy and agile instead of weighted down or like a boat.

We stopped on the trail at one point to put some lead down range – and the crew was able to sit in the shade, listen to tunes, and enjoy a cold one while we each took turns shooting. Turns out Brandon is a better shot with his 40 year old .22 rifle than any of us were with our hand guns! We also stopped to play around with our Losi Mint 400 Baja Rey on the kids track before dinner. A great way to unwind after a long day of riding. We made camp for the night, swapped stories over burgers and dogs, and fell asleep under the stars.

So what’s the verdict on the General and this Deluxe model? Well Polaris pretty much invented this category and it’s only right that they should own it. Honestly, it just makes sense – for many of us riding UTV’s is not about racing, its about friends and family, and getting outdoors. We want reliable, fun, and safe transportation for our loved ones, and our gear. The General is ergonomically superior to anything else in the class in our opinion. It’s simply 99% ready to roll from day 1. We would likely beef up the audio system, add in a radio and intercom, and maybe swap the seat belt for a full harness. But none of that is really necessary to get on the trail with this machine and have a blast. After researching this category backwards and forwards we would highly recommend starting your search for a crossover UTV with the General. Get down to your local Polaris dealer and test drive the new four-seat General. One you sit in this machine and drive it you’ll understand why it has done so well for Polaris. We’re looking forward to seeing what the boys in blue come up with for this platform in 2021 and beyond!

Here’s a link to the 2020 Polaris General we tested: https://general.polaris.com/en-us/general-xp-4-1000-eps-deluxe-stealth-gray/specs/