Ok so for those of you who are new to the UTV scene Can-Am ATV’s and UTV’s are made by BRP or Bombardier Recreational Products. BRP owns manufacturing facilities in Canada, the United States, Mexico, Finland, and Austria – and are distributed in over 100 countries by more than 4,200 dealers. Can-Am and Polaris go neck and neck in almost every UTV category and you’ll see why that’s a good thing by the end of this article. Can-Am started making ATV’s back in 1998, but it wasn’t until May, 2010 when they released their very first UTV, the Can-Am Commander. That exciting entry into the market featured industry leading 85 HP, Fox Racing Shox 2.0 RC2 shocks and beadlock wheels.

The 2011 Can-Am Commander model line up featured a total of six models with two different engine sizes to choose from, earning the Can-Am Commander 1000 a “Best of the Best” award in the side-by-side vehicle category from Field & Stream Magazine. For the last 10 years, the engineers up north have continued to make vast improvements to the Commander line while also launching their sport model dubbed the Maverick. There has been a fierce battle for market share between Can-Am and Polaris for over a decade now – and that has driven them both to offer better and better machines. It’s worth noting that the Polaris General, while not strictly modeled after the Commander, does share a lot of the same stylings and features – just as the Can-Am Defender came out well after the Polaris Ranger and is almost identical in size, shape and features as well. There’s no love lost between these two giants!

So what’s new for the 2021 Commander lineup? Well for starters there are a total of three different two-seat Commanders being offered for 2021, along with two different Commander MAX four-seat models. 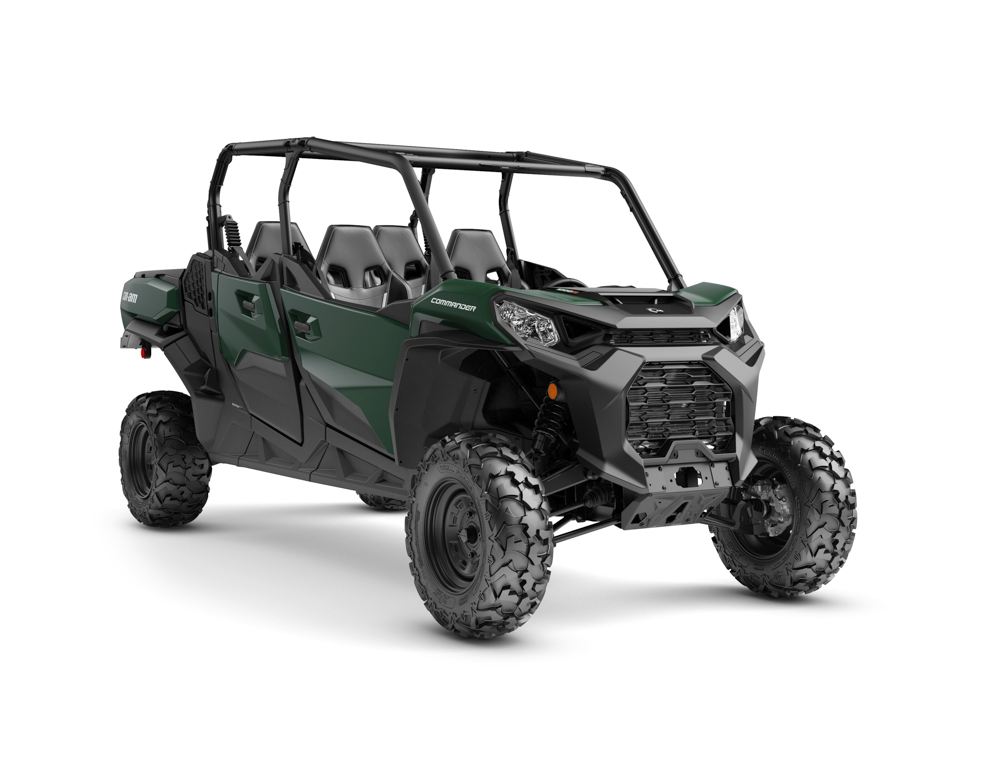 Now on the four seat side there’s the Commander MAX DPS coming in at $19,199 – which is basically a four seat version of the Commander DPS 1000R AND the model we’re shaking down today – the Commander MAX XT 1000R which like it’s two wheel brother – features 15” of suspension travel, 28” XPS Trail King tires, 14-inch cast aluminum wheels, 4500-pound winch, XT front bumper, full roof, and the 7.6” digital display – all for the low low price of $21,199.

Exterior
OK so back in February Can-Am shipped us a nicely broken-in Commander MAX XT with about 100 miles on it – in Oxford Blue! Not our favorite color – but whatever – we wrap everything around here so no big deal. The MAX XT is 64” wide and just over 160” long. From the outside, it has the same stance of a nice four-door Jeep or SUV. The 28” tires are a nice step up from the normal 27” but frankly we’d prefer 30” at this point. It makes a world of difference in the rough stuff. Now the passenger driving and riding position of the Commander is very similar to the Polaris General and we like it a lot. It’s much better in our opinion than say the Yamaha Wolverine or Kawi Teryx4 which feel too upright for our taste.

The Commander has the largest cargo box in the industry, which has been standard for several years now. To Can-Am’s credit – this machine just feels like it’s ready to run hard right out of the gate. It’s very well designed and laid out, and the exterior plastics feel rock solid to the touch. You can see and feel how solid the car is right away when you walk around it. Our unit came with a LinQ Cargo Rack, LinQ 4.2 Gal Cooler, and a LinQ 4,5 Gal Sport Bag – which are just some of the fantastic accessories offered by Can-Am. The number of storage options, tool kits, and other add-ons is really fantastic.

These days we wouldn’t leave the house without a roof so we feel that should be standard on any UTV model, as should things like side and rear view mirrors. It’s also worth mentioning that the Can-Am Audio Roof MAX which comes in at $3,749 will turn your commander into a mobile DJ booth. It contains six 8″ speakers and one 400 watt amplifier calibrated by Rockford Fosgate. So yes, you can go from mild to wild pretty quickly at the dealership.

Motor & Transmission
The Commander has a 976cc, Rotax V-twin, liquid cooled engine. It’s the same tired and true electronic fuel injected 100 horsepower motor and Quick Response System (QRS) CVT that Can-Am has had so much success with these past ten plus years. Most of the competition is at or near 1000cc and 100 horsepower – but Can-Am does have the technical edge on a few of the specs and price – depending on how you build them. This vehicle has a LOT of power and is very responsive, even under a heavy load. The towing capacity of 2,000 pounds is best in class, and the payload capacity of nearly 1,300 pounds means the Commander is ready for most hauling tasks.

Suspension & Ride Height
We’ve said it before but, the smoothness of a ride is really a combination of the suspension travel, wheel and tire size, shock setup, and clearance of the machine. The Commander MAX XT suspension is built around arched double A-arms with a sway bar up front and some decent set of home grown shocks which net out to 15” of travel. That’s an inch more than the competition so kudos to them on that note. The 64” stance makes the vehicle feel STABLE – but it’s not SO wide that you get hung up on tighter trails. The overall length is about ten inches longer than the General at 160” – and that translates to more room for us tall people. Overall the machine does very well on the rough stuff but we do miss the 30” tire setup. For us that is the new standard so we’d like to see that option down the road.

Interior
The interior of the Commander has come a long way. These MAX XT seats are firm, comfortable, and breathe nicely even in the heat. The doors feel solid and are well finished. They do a great job of keeping the dirt and dust off your body without obstructing airflow. The steering wheel, steering column, instrument cluster, and gear shifter all feel robust, solid, and have a very logical layout. None of this is brain surgery but you’d be surprised how many little things other OEM’s screw up!  The Digitally Encoded Security System, or DESS Keys offer great anti-theft protection. And the encrypted chip technology allows the ability to reprogram the key for learner use by restricting access to your Commander’s electronic ignition system. It’s a great feature for teaching the kids to drive responsibly. And the 7.6” touch display is very nice and easy to use even with gloves on.

The Shakedown
We took the Commander MAX XT out on several film and photo shoots, as well as a few joy rides and overall we were really really impressed with this vehicle. One of the things we love about the Commander right from the get go is the seating and the amount of legroom. We are constantly jumping in and out of these UTV’s with cameras and other gear in our hands and the Commander is really easy on the body. It’s EASY to work out of, and comfortable on the rides. We also love the massive Cargo bed because we loaded it down with tripods, sandbags, coolers, and all the stuff we needed to film with. There’s a lot of gear involved in transporting four people and we never ran out of room. The MAX XT just feels good to climb into, put your belt on and start driving. There is no window or door netting to deal with. We did miss having a navigation system and a stereo option ready to go – that’s something we would need to add on right away. Luckily our unit came with a roof AND a cooler and that made it perfect for the trail.

We spent the day hammering on this Commander and one of our biggest takeaways was how well it handled the weight of four men and all our gear.  It doesn’t have the power and throttle response of a full blown sport UTV, but it did very well even on steeper trails. We flogged the motor and got her up to 50+ miles per hour which is pretty impressive for a 100hp motor carrying nearly 2,000 pounds of men and gear! We even stopped and worked with the winch a bit to test it out and it was super easy to use. One thing we did notice is that on smaller 28” tires there just isn’t as much clearance and we did bottom out occasionally. But that was pretty minor.

When we took the MAX XT into the tighter turns the longer wheelbase took a bit to get used to. But the suspension soaked up the whoops and the steering was very responsive. It was really fun to rip around in. The guys sitting in the back of the machine were not getting slammed around much at all. The 64” stance kept us from feeling like we were tipping over, but the Commander does feel a little long in the tooth when you try to navigate tighter trails. But that’s really just the case on any 4 seat model.

So what’s the verdict on the Commander MAX XT 1000R? Well Can-Am pretty much invented this category in 2010 so it’s only right that they should own it. That said – right now they are winning on PRICE – but they seem neck and neck with the General on overall value. It honestly just comes down to how you build the machine, how many of the accessories you add at the dealership, and the financing you can arrange. The MAX XT is a rock solid contender though for people looking to move family and friends safely down the trail, comfortably.

For us, we need a roof, navigation, stereo system, intercom, rear and side view mirrors, backup camera, a harness instead of a seat belt, and a cooler and dust proof gear bags to really call a UTV complete. When you line all that out you’re looking at much closer to $30K than $21K – but we do have to give Can-AM kudos for making these four seat models affordable and scalable. SO…Get down to your local Can-Am dealer and test drive the new four-seat Commander MAX XT. Once you do, you’ll understand why it has done so well for Can-Am. We’re looking forward to seeing what the engineers from Canada come up with for this platform in 2022 and beyond!