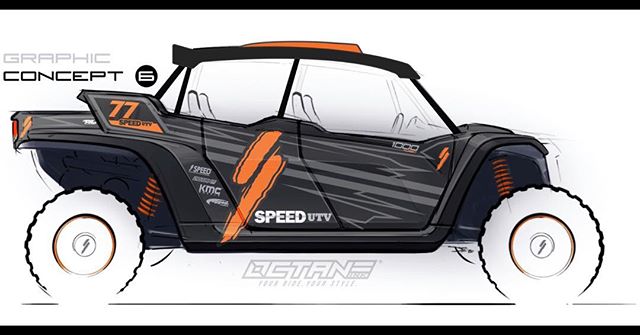 Robby Gordon dropped some major news on the engine that’s going to be used in the Speed UTV, live on Facebook today. If you’ve got some time to burn, it’s well worth the watch:

Here are the engine details you care about most.

Keep in mind, to get a Speed Key, you literally have to sign a disclaimer saying you release Speed UTV of any liability and you’re voiding your warranty.

The engine is 999CCs, I’m sure Robby would love to stuff a 1500cc engine into a UTV, but according to the Recreational Off-Highway Vehicle Association any UTV or Side by Side is limited to a 1000cc engine.

As far the super technical details go, here’s what we know about the engine:

Robby Gordon explained that they decided to build the motor from the ground up in shop, instead of purchasing an off shelf one so that they’re not limited to what they can do with it.

What about the belt life?

It’s a sore topic. Yes, the Speed UTV will have a belt, but Robby Gordon being Robby Gordon, thought of everything. You’re going to have a infrared belt temp sensor, that’s going to limit the throttle response in order to help save the belt if it notices the belt getting hot. Don’t like that? Not a big deal, push a button and go ham on that belt. Similar to what you’re used to in your daily driver with traction control, you’re going to have a button to disable the throttle limiting if the infrared sensor notices the belt is running hot.

We didn’t hear any more details on the drivetrain, or the transmission but Robby Gordon teased that next week we would find those details out on the Speed UTV Facebook live stream.

A few random tidbits that were answered during the live stream.

The 4 seat Speed UTV is aimed to be released Thanksgiving 2020, while the Closed Cab Speed UTV with HVAC should be released Summer 2021.

If you’re big or tall, how comfortable are you going to be?

When placing the order, you can request to get an extra set of seat mounts so that you can stuff your driver seat a bit further back. Robby’s goal is for a basketball player to be able to drive the Speed UTV in comfort.

Why is the warranty going to be voided if I use the Speed Key?

You’re essentially taking your life into your own hands, 300HP in a UTV means you might as well be in a race car. To get the Speed Key you’re also going to need to sign a disclaimer releasing Speed UTV of any liability. If that doesn’t sound like fun, I don’t know what does.

Yes, at the tire bulge, you’re going to be 77” wide, doesn’t matter if you’re fully compressed, or the tires are off the ground. 77” wide all the time. This is going to be a huge benefit when taking corners at speed, the car is going to be predicable and more stable.

How wide is the bed?

The bed in the Speed UTV is 48″ wide, the widest in the Sport UTV market.

No, but in Robby’s own words “You’re getting something better.” Speed UTV developed CVs specifically for the Speed UTV Platform, double plunge 300M stars, these are components that Robby Gordon used at Dakar and Mint 400, they’re high quality CV components, something Robby would use on his race car and not just in a production car.

To stay up to date, make sure you check out our Speed UTV page with all the details we’ve got up to date.