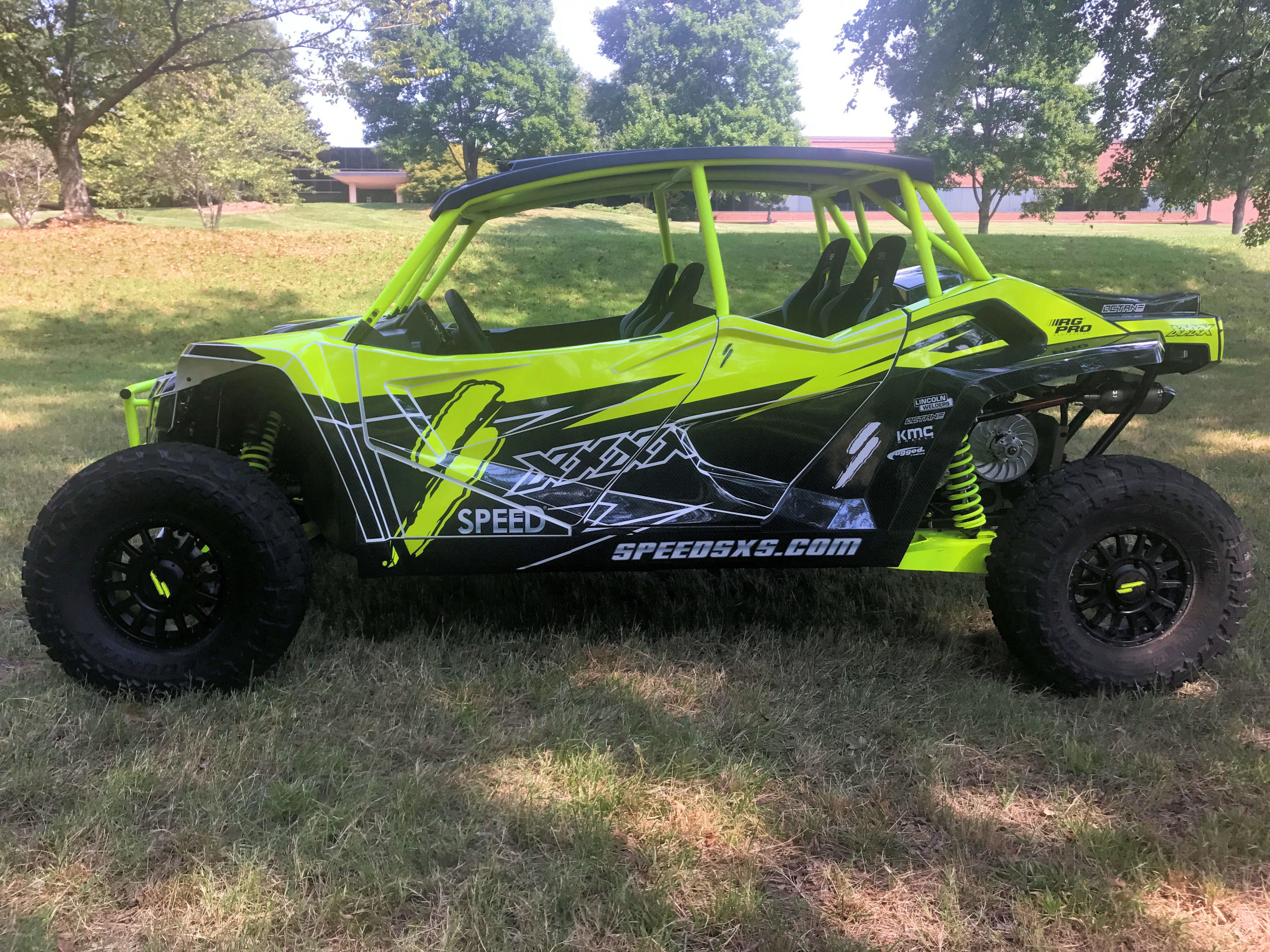 Robby Gordon just dropped a bomb with the new 2021 SPEED UTV 4 Seater. We’re still waiting on all the details, but here’s what we know so far.

If you missed the Live Stream you can catch it again on SpeedUTV’s Facebook page.

There are no ball joints used anywhere on this car, instead they’ll be using in house built what we can only describe as spherical bearing heim joints, this is revolutionary stuff.

The upper A arm is adjustable, so you can adjust the camber to your own preference, just keep in mind you’ll need to worry about the CV angles. The roll cage comes with a signature Robby Gordon spine with A and V bars right out of factory, it’s MIG welded – about as sturdy as they come and almost race legal.

Tubing thickness varies, but it’s about the same if not beefier as what all the other manufacturers are using. It’s all round tubing.

The back of the chassis disconnects to make the engine removal a quick and easy  process.

It’s not fully race legal, but about as close as you can get. Theoretically speaking all you need to make it race legal would be bars that run from the pillars, window nets, and a fuel cell.

Width is at 77” and it’s a got 120” wheelbase, same wheelbase as what Robby Gordon’s trophy truck is. It comes with 15” of ground clearance and 25” of usable travel front and rear

Shocks are 3.25” internal bypass, with a 12” stroke, they’re built in house, you have externally adjustable compression and rebound as well as 360 degree clockable piggyback reservoir. All aluminum except for the steel shaft.

Rear shock mount tie into the frame of the car, they’re not just tabs that are welded on.

Spindles are forged, they have oversized wheel bearings, shoulder bolts that are threaded all the way through to make them not break as easily.

Steering is electric and hydraulic, you get less than .5 degree of bump steer, it’s basically what Robby Gordon uses on his trophy truck. The steering piston is 1.5” in diameter.

The front of the car is solid forged casting that ties the structure together. In the event you have to replace it it unbolts together so you won’t have the play with the suspension geometry to get that right again.

The engine is a 2 cylinder turbo charged motor, it produces 230HP at the engine, SPEED UTV worked with local NASCAR engine designers to design the engine.

It comes with 32” tires, you can run up to a 35” tire on it, and most importantly fit a 35” tire in the bed. No more tires on the roof, the weight of the vehicle will be down low.

Tires and wheels will also be announced on Wednesday April 1st, but the lug pattern is what Polaris uses, or 4 on 1.56. The studs are 12mm’s with hub centric wheels, which makes the shearing effect 4 times stronger.

It comes with King of the Hammer style shift on the fly 4 wheel drive. It has open diffs in two wheel drive, but when you shift into 4 wheel drive, like a tractor it locks the front and rear axles.

You can get up to a 230AMP alternator. It comes with a massive 15 gallon fuel tank, a high flow fuel pump, and the computer will automatically adapt the pressure for you if you run E85.

Breaks are dual piston front and rear, built in house.Weight goal is to stay right around 2,100 lbs, but the final number may vary.

The first 500 cars will come with 5 point harness, carbon fiber seat, and a UHMW roof, about $2,500 worth of added vcalue.

It starts at $32,000 and you can pre-order one today on SpeedUTV.com

A model featuring glass windows, AC & Heated interior was also mentioned, we will get all those details come Wednesday!

On Wednesday April 1st at 7:00pm EST Robby Gordon will unveil the interior, and all the details surrounding the engine and transmission. Robby teased that the the SPEED UTV will come with a 10” flat screen and you’re going to be able to mirror your phone on it.