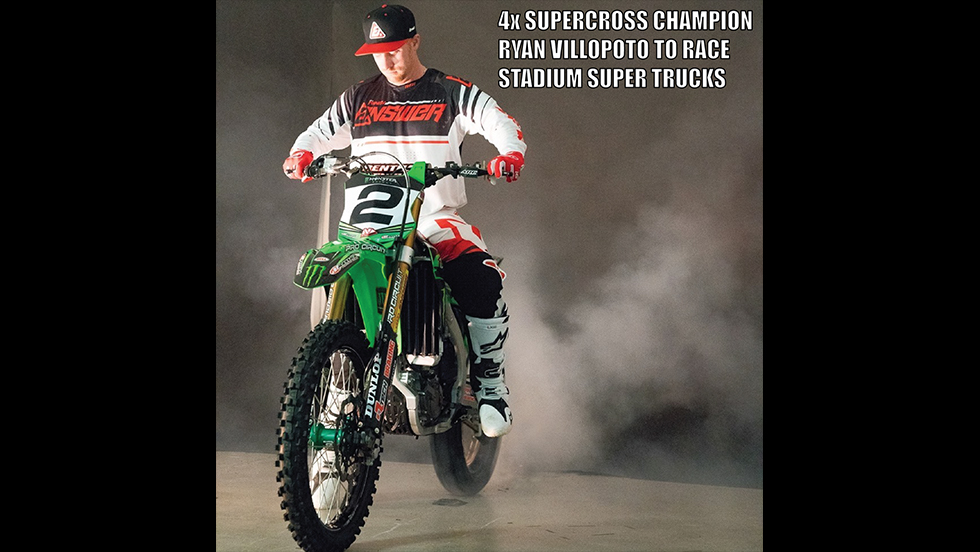 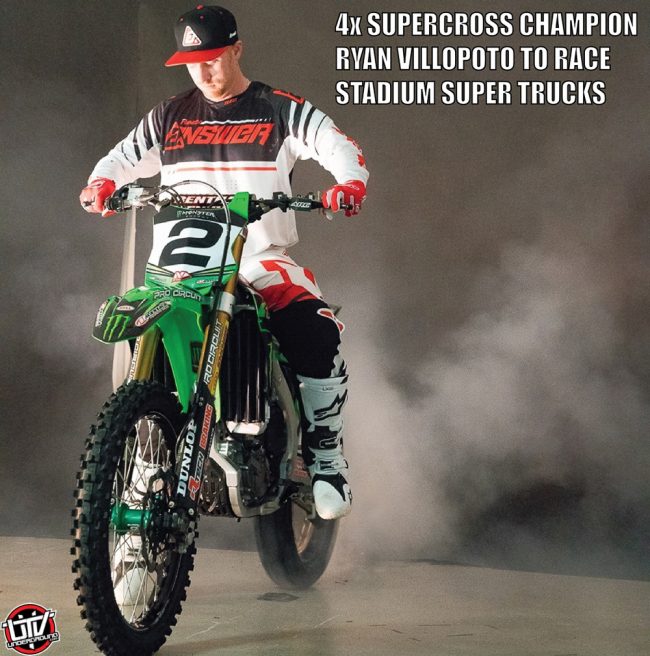 After winning four straight AMA Supercross Championships from 2011 to 2014, Villopoto announced his retirement at the beginning of the 2015 season. Since that time Villopoto has looked to continue his passion for off-road, but on four wheels instead of two.

“I’m excited to get behind the wheel of a off-road truck again, I haven’t had many chances to drive, but the few I have had it’s been an absolute blast. I’ve been following what Robby Gordon has been doing with Stadium SUPER Trucks for some time now, and to have an opportunity to drive one of those trucks with some of the best names in the sport is truly an honor.” Stated Villopoto.

Villopoto’s No. 2 truck is supported by Bristol; Tennessee based RPM Off-Road, an after-market truck and diesel specialty store offering sales and services in house and online.

Joining Villopoto on the RPM Off-Road team will be 2017 Baja 1000 Winner Apdaly Lopez, and the first female to compete in Stadium SUPER Trucks; Sara Price.

Tickets for the first ever Stadium SUPER Trucks Rock and Race World Championship Finals a can be purchased at http://www.stadiumsupertrucks.com.

Make sure to come to the event early each day as the Off-Road Lifestyle Expo opens at 2 PM on Friday, 10 AM on Saturday, and stay after the races are over for a concert by Warrant on Friday and BuckCherry on Saturday.

Looking to entertain family and friends or host a small holiday party? Fully furnished, catered, and climate controlled suites are still available to view all the entertainment on the stadium floor in luxury. Pricing is available by contacting Stadium SUPER Trucks at [email protected]

Drivers looking to participate in either the 1000 UTV’s , Modified Trophy Karts or 170 UTV’s there is still time to sign up. Drivers are able to register for the event at www.stadiumsupertrucks.com.

More information on the Stadium SUPER Trucks Rock and Race World Championship Finals can be found at http://www.stadiumsupertrucks.com

About SPEED Energy Stadium SUPER Trucks
Influenced by the former Mickey Thompson Stadium Off-Road Racing Series, where drivers such as Gordon, Casey Mears and seven-time NASCAR champion Jimmie Johnson got their start, Gordon created SST in response to the public’s overwhelming interest in trucks and off-road racing. His plan to re-launch the former stadium series has led to exciting racing on both asphalt and dirt, while producing one of the most extreme forms of action sports today.

Other than the trucks launching 20 feet in the air covering distances more than 150 feet, what sets the SST program apart from other series is the fact that all the SST trucks are identically prepared and delivered to drivers in race-ready condition. Race winners are decided by driver skill rather than individual team engineering and budgets. Drivers and their personal mechanics are assigned specific SST mechanics who together tune and make minor adjustments to the 600-horsepower trucks.