Home Front Page News All New Season of The Diesel Brothers Returns to Discovery Channel This... 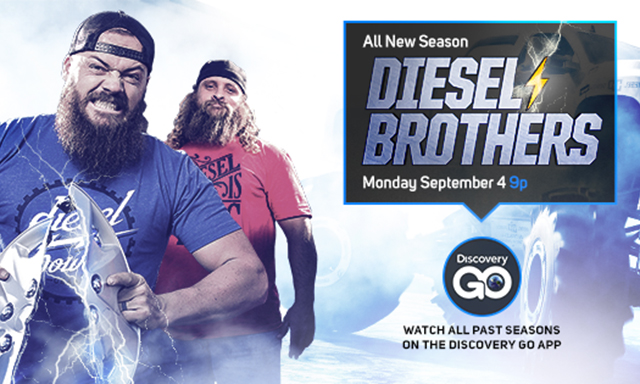 The boys are back… Heavy D, Diesel Dave, The Muscle and Red Beard, along with the rest of the Diselsellerz crew are bringing you bigger builds, awesome truck giveaways, and more hilarious pranks in the all new season of DIESEL BROTHERS priemering on Discovery’s Motor Mondays on Discovery Channel on September 4th at 9 PM ET/PT.

Longtime buddies Heavy D and Diesel Dave started their business off by buying used, or broken down trucks and tricking them out for sales, while posting their best pranks and stunt driving on social media. Millions of hits later, Dieselsellerz.com has become the destination for diesel lovers looking for pimped out trucks, crazy stunts, and hilarious antics.

This season on DIESEL BROTHERS, the guys get an invite to race the legendary Mint 400, but have to build a race truck in just a week to get there. Having always aspired to race, Heavy D fulfills his childhood dream to drive a monster truck, which he does at the Monster Truck World Finals. Beyond builds, the guys also attend the legendary Sturgis motorcycle rally, where they track down a one-of-a-kind, AWD, hydrostatic diesel motorcycle.

The builds are bigger and badder this season starting off with a 5 ton military truck the guys transform into a monster snow plow, a stock F150 they turn into the ultimate towing rig for a client, a complete rebuild of their favorite SEMA favorite, the SuperSix and so much more. This includes amazing tuck giveaways like the MegaRam, a Titan XD with a Cummins motor, and a F250 Raptor.

Watch as these band of brothers turn ordinary rigs into decked out diesel trucks, give away the hottest rides, pull the funniest pranks and push the limits with crazy stunts on DIESEL BROTHERS.