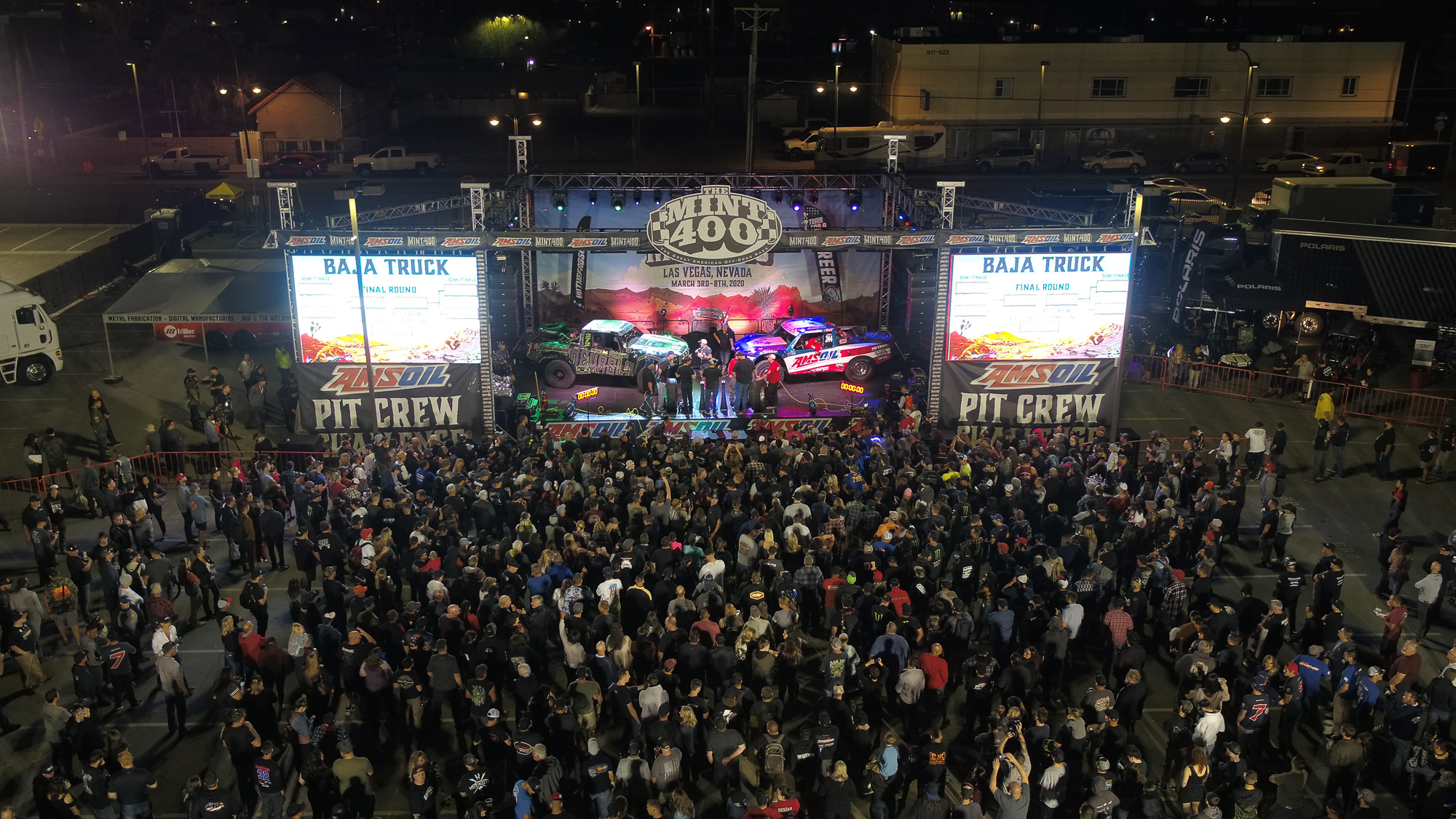 As competitors in this year’s BFGoodrich Tires Mint 400 began to depart Las Vegas to head to Primm for two days of racing this weekend, Thursday night’s Mint 400 Block Party served as a massive sendoff for the teams that had to bid farewell to Fremont Street. With the AMSOIL Pit Crew Challenge, crowning of new Miss Mint 400 Emily Dobrzenski, and a free concert from Eagles of Death Metal, the festivities set high expectations for the crowd, and didn’t disappoint.

A packed crowd gathered around the Mint 400 Main Stage for this year’s AMSOIL Pit Crew Challenge, where the top Unlimited Truck and Baja Truck teams in the sport would face off head-to-head for the honor of fastest pit crew at the Mint 400. A stacked Unlimited Truck field included the crews of Bryce Menzies, Ryan Arciero, Tim Herbst, and defending Mint 400 winner Justin Lofton, but in the end, it was Ryan Poelman’s crew of Bryan Basile, Allen Cullen, and Karl Green who earned the golden Pro Eagle jack with the victory. On the Baja Truck side, Householder Motorsports scored their third consecutive victory in the annual competition.

The crowning of Miss Mint 400 also took place on the Main Stage, with Emily Dobrzenski inheriting the honor from Bailey Hughes, who moves on to the title of Mint 400 Queen. Dobrzenski will become the first Miss Mint 400 in event history to also compete in the Great American Off-Road Race on Friday, when she teams with three-time Mint 400 winner Lacrecia Beurrier in the Pro UTV Unlimited class.

If that wasn’t enough for the thousands on hand, Eagles of Death Metal put an exclamation point on the night with a free concert on the Main Stage. Led by frontman Jesse Hughes, EODM made their triumphant and long-anticipated return to the Mint 400 after playing a VIP party two years ago.

“This year’s Mint 400 Block Party was one of the biggest and baddest we’ve ever had,” said Mint 400 CEO Matt Martelli. “There’s no better way to get ready for two days of awesome racing than our festivities on the Main Stage, and this year’s lineup made for a hell of a show. Between another exciting AMSOIL Pit Crew Challenge, the crowning of Emily Dobrzenski as our new Miss Mint 400, and an epic set from Eagles of Death Metal, this year’s show set the benchmark for our downtown events for years to come!”

Racing kicks off from this year’s BFGoodrich Tires Mint 400 on Friday with Mini Mint 400 competition and Motorcycle and Limited class racing throughout the day. For off-road fans still in Las Vegas, the Mint 400 Off-Road Festival continues through the remainder of Friday on Fremont Street until 5PM. For up to date information on this year’s event, and to livestream the action, visit themint400.com or follow @themint400 on social media.