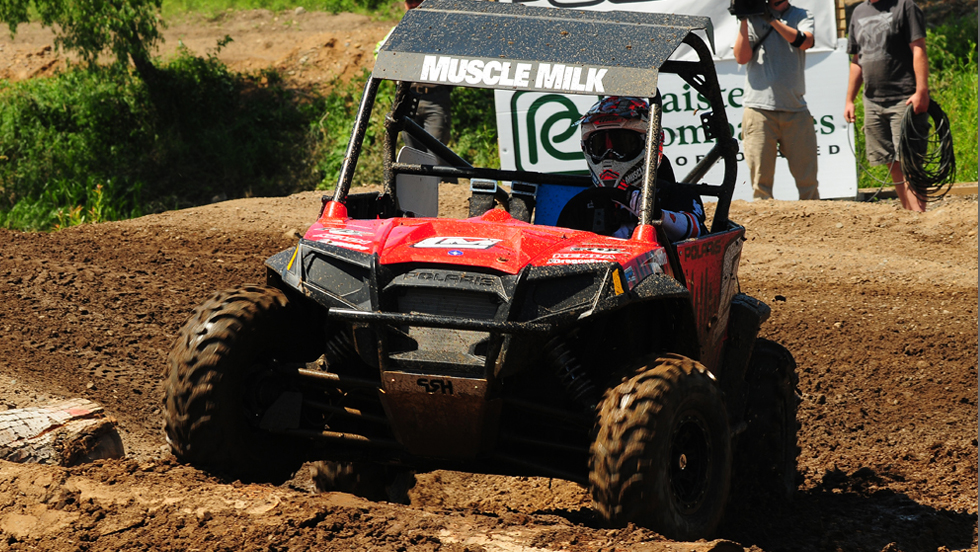 Elk River, Minnesota (June 27, 2012) – It was a coming out party like no other as TerraCross racing returned to the forefront of the off-road racing community and side-x-side wheelman rising star Andrew Carlson stole the show with a pair of incredible performances. After a several year hiatus, TerraCross racing made its return debut at ERX Motor Park in Elk River, Minnesota with pro class main events both Friday and Saturday featuring utility quad and side-x-side competition on a hybrid motocross track littered with obstacles.

With a deal already inked to broadcast the four-race series on CBS Sports Network, the pro side-x-side field was bursting with top-level talent including Jeff Loyd, Doug Gust, Daryl Rath, and snowmobile backcountry extraordinaire Chris Burandt. Yet it was Andrew Carlson in his Muscle Milk Polaris RZR that stole the show with a blistering win on Friday evening where he crossed the line with a near 8-second margin; and his gas-for-glory last lap pass for second place on Saturday.

Combining elements of motocross with a variety of man-made obstacles including telephone poles, rock fields, mud pits, and massive timbers, TerraCross is the ultimate test of machine and driver. Faced with a 10-lap final, drivers must manage the desire the go for it while protecting their equipment as they pound through massive boulders and launch off huge tractor tires.

While Carlson’s win on Friday had everyone in the stands buzzing, it was his come from behind podium on Saturday afternoon that was perhaps even more impressive. Faced with a back row start in a field of 10 pro finalists, Carlson emerged from the turn one melee’ in 7th place. He then carefully managed the 10-lap race to work his way through the field to eventually find himself in the final podium position. While the battle to this point would have been a perseverance victory alone, Carlson wanted more and mounted one final bid for second place. With legendary off-road racer Daryl Rath in front of him and the finish line in sight; Carlson squared up his RZR and mashed the gas over the tires and final jump, rocketing himself past Rath and onto the second podium box.

“The track was brutal,” said Carlson after emerging from his Polaris. “I was picking good lines and playing it safe over the big obstacles for most of the race. But on the final lap I went for it and it paid off.”

Carlson Motorsports is a family of racers, mechanics and sponsors who are proud of our accomplishments on the track and off, and are driven to excellence in everything we do. Our racing organization is driven by a deep-rooted passion for the sport and an operational philosophy grounded in integrity. To learn more about Carlson Motorsports LLC, and how you can partner and share in their success, visit their website at www.carlsonmotorsportsllc.com

The best wheel tie down system for your UTV is HERE!