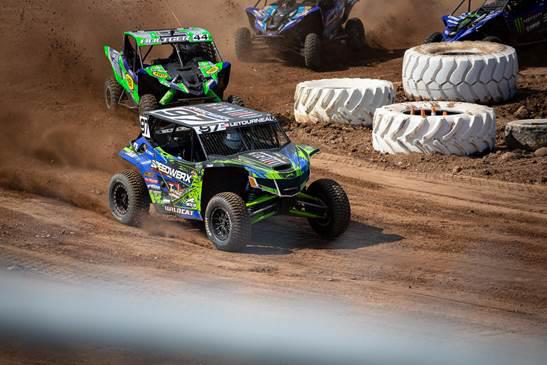 The Speedwerx/Tralo Motorsports/Arctic Cat short course team had a successful weekend at rounds three and four of the Championship Off-Road season at Dirt City Motorplex in Lena, Wisc., for the first running of the Dirt City Motorplex Off-Road National. The team had five Wildcat XXs competing in the event: Jeremy Houle No. 54 and Rookie Pro Jack LeTourneau No. 97 in the Pro Stock class; and Sportsman class rookies Mike LeTourneau No. 99, Jake Jorgenson No. 11, and Jonny Hentges No. 15. The Speedwerx-prepped machines were fast. Of the 10 individual main event results recorded for the weekend, the team logged a win, a podium, and nine top 10 finishes.

Saturday morning started off with Pro Stock qualifying. Jack LeTourneau was fourth, and Houle had an electrical issue and was not able to record a qualifying time. This had LeTourneau starting first after the invert, while Houle would start 24th in the main event.

The 32-car, eight-lap Sportsman SXS main was the first race for the team on Saturday. The Sportsman class does not qualify on time; they invert the top 12 in points with the 12th place in points starting first. Hentges was outside the invert after his DNF in round two and would start fourteenth, while Mike LeTourneau was eighth and Jorgenson ninth. When the green flag flew, the Wildcat XXs began to work their way forward and all three were battling for top 10 positions. The race was cut to six laps due to time, but when the dust settled LeTourneau came home in fifth, Jorgenson sixth and Hentges eighth.

The first race up after Pro opening ceremonies was the 24-car, 10-lap Pro Stock SXS main with Jack LeTourneau and Houle starting on opposite ends of the field. LeTourneau used his pole position start to jump to a big lead in the opening laps, but a couple small bobbles had him give up the lead. When the competition caution flew at the halfway mark, LeTourneau was sitting in second while Houle had worked through half the field and was up to eleventh. The green flag flew and LeTourneau had a comfortable second place going, but another bobble dropped him back to third where he would stay to grab the last step on the podium. Houle worked his way past another five cars in the final laps to finish sixth, moving up 18 spots from his 24th starting position.

“We are super proud of LeTourneau and his performance. This is his first Pro podium, but we know there are a lot more to come,” said Team Manager Houle.

On Sunday, after a few schedule changes and rain showers, the 24-car, 10-lap Pro Stock SXS would be the first to run on the very wet and muddy track. Officials had opted to forgo the competition caution and run the 10 laps straight through, so everyone would be pushing hard knowing there would be no reset button.

On the start, Houle made a bold move to the outside that put him up battling for third by the second turn, but race officials called him for jumping the start and he had to drop back around 10th place. LeTourneau had moved into the top five early and was working his way towards another podium finish, while Houle charged hard to fifth. Late in the race, LeTourneau was challenging the third-place car and got a good run on the outside going into the turn on the final lap, but the cars made contact and pushed him wide. LeTourneau would make another charge and come up just short of another podium in fourth, while Houle finished fifth.

With an adjusted schedule, the 33-car, six-lap Sportsman UTV class would run later in the afternoon on a much drier track. With the 12-car points invert, Hentges would start third, Jorgenson ninth and Mike LeTourneau tenth. Coming out of the first turn, Hentges was already leading the race and never looked back to record his first win in just his fourth race ever in the Speedwerx Wildcat! Behind Hentges, Jorgenson and LeTourneau battled hard inside the top 10 but with a race cut short due to cautions and restarts, it was hard to get any momentum to make passes. Jorgenson would finish seventh and LeTourneau 26th after contact with another driver on the last lap forced him to pull off the track.

With all the ups and downs during the weekend, it was a great points weekend for the entire team. In Pro Stock SXS, Jack LeTourneau is currently fifth in points and Houle two points behind him in sixth. In the Sportsman class, Jorgenson is currently in second place just two points behind the leader, and Hentges sits in eighth with Mike LeTourneau one point behind him in ninth.

Next up is the third stop of the Championship Off-Road series at ERX Motor Park in Elk River, Minn., on August 15-16. This event was moved from Bark River, Mich. The races will be broadcast with a free livestream on Saturday and Sunday.Check out the Speedwerx YouTube page for a highlight reel from the race. The entire livestream broadcast from Dirt City can also be seen at this link is also available.