Home All Stories News Are You The Camp Chef? 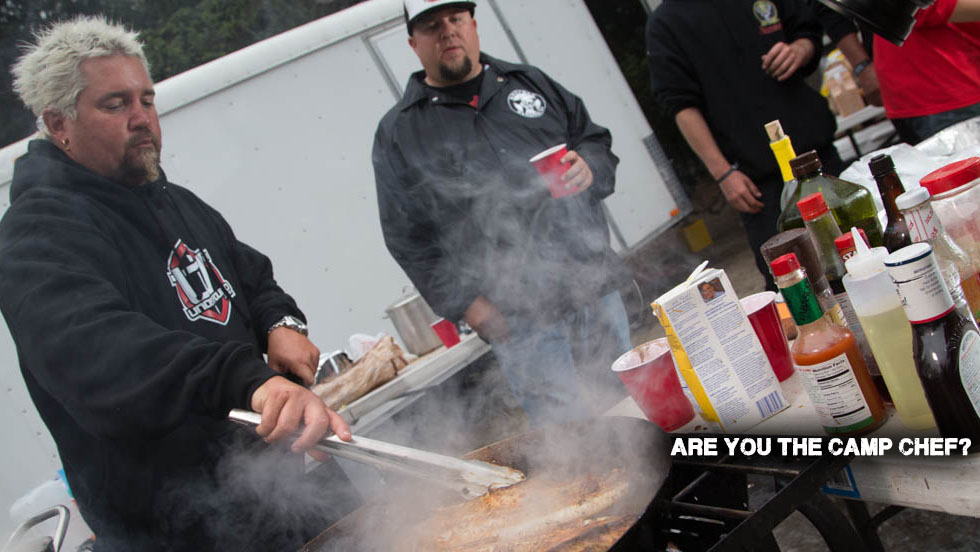 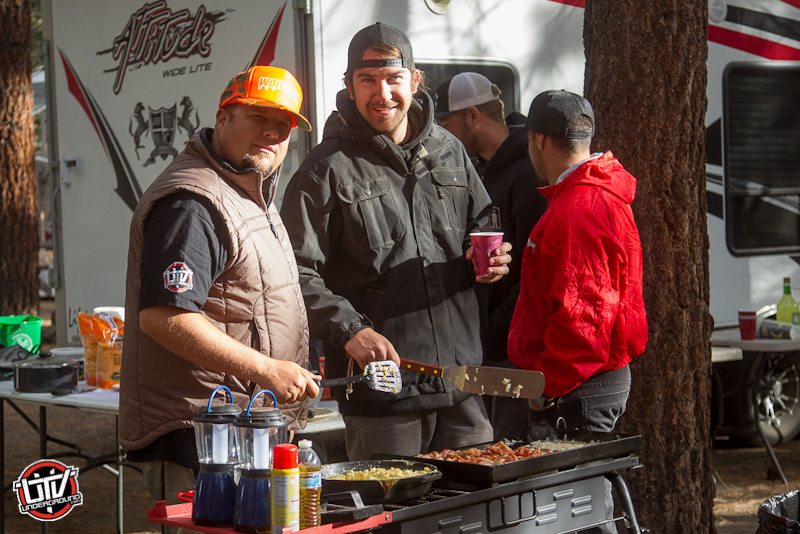 I like most people in this world enjoy food. I wouldn’t say I have an eclectic pallet, I am more into basics and most of my friends would tell you I’m picky. What can I say? I like what I like.

Over the last year I have been forced to try new things, experience new foods and branch out of my box that I consider safe and sound as it pertains to what I eat. This year alone I traveled to Mexico multiple times, Dubai, hit almost every corner of the US and spent a lot of time with my good friend and celebrity chef Guy Fieri. Its with these travels, friendships and experiences that I have ventured out of my safe haven of eating and began trying new things and gained a lot of respect for how meals are prepared. In addition, I also began to embrace my own desires in wanting to personally become a better cook. Now don’t get me wrong, I am still the same eater but I have learned that there are things out there that I thought and knew I would hate that instead I enjoyed. This whole process has been helped along by my brother from another mother, Matt Martelli at Mad Media. Matt will eat anything, literally, and he has openly challenged me many times to put down the cheeseburger and pick up the goat brain.

Food is not only a part of life, its a center point in all of our gatherings. As we approach Thanksgiving, a holiday associated with stuffing our faces, I thought it would be cool to share some of the photos we have collected over some recent travels that involved food. Mad Media is known for their excellent imagery and cinematic video work that you all enjoy via our UTVUnderground.com produced content. You all have seen the shots, but now is your chance to focus in and drool!

To be the ultimate Camp Chef you have to not only have the cooking skills, you got to have the cooking tools! After spending a week with Guy Fieri at Dunefest, we knew we needed to step our game up as it pertained to setting up a solid camping kitchen. To do this we tried to duplicate his set up so we contacted the awesome guys at CAMP CHEF and ordered up the exact set up Guy had. They dialed us in with their 3 burner stove top that came with a BBQ Grill box attachment and a professional flat top aka skillet attachment. Whats cool about this set up is now we can use the stove top to boil water, heat up that pot of baked beans or cook with a frying pan. The attachments then allow us to convert the burners to a BBQ Grill or a Flat Top Skillet. This is the ultimate set up! The flat top is my favorite. During our trip with the Warfighter made crew to Mammoth I took on all the cooking duties. I used our flat top every day to cook breakfast on. In the evening I switch over to the grill where I cooked some mean bbq bacon burgers and sausages.

Turns out Scott Smith from High lifter is one bad ass southern cook himself. When our crew headed down to Louisiana to do some mud riding, Scott brought everyone back to his house where he then entertained everyone with some real cajun cooking! Scott whipped up andouille sausage, deep fried frog legs and shrimp and the made a solid crawfish boil pot!

Anytime friends and family see that I had spent some time with Guy Fieri they always ask, SO HOW WAS THE FOOD? My response, BOMB! It always is. Guy’s cooling abilities are often overshadowed by his over the top TV persona. Guy is over the top in everything he does, but the reason he is where he is, is because he can flat out cook. When we were at Dunefest we told Guy we wanted to have a seafood cookout, our treat. He said “you bring the seafood, I’ll cook it up!” So we roll back from town with a few dozen oysters, clams, fish, shrimp, you name it. I asked Guy, “do you need me to pick-up any ingredients?” He looked at me like I was insulting him. His response, “just get me the damn fish!” lol – What Guy did that night with all that raw seafood was epic! He enlists the help from his friends who are all like line cooks, they bust open crab, crack open the oysters, he fires up a boiling pot, chops up some potatoes and next thing you know we are eating the most amazing soup, oysters, and fish you have ever had. In a million years I couldn’t have whipped that up, known just how long to grill the oysters or fish. We saw the master at work and everyone around was feasting one of the best meals we had ever had on a camping trip!

Traveling to the Middle East is epic on so many levels. Dubai and the UAE in general puts you in total culture shock and a guy like myself was thinking I better stuff my bag with as much snack food and chicken sandwiches as I can fit! Again, I am not that outgoing when it comes to trying new things. The only thing I had going for me is I had been to Dubai once before so I knew what i liked and didn’t like. However, every time I travel I always want to partake in that areas culture and experience different things. Dubai is a stretch for me but I must say, the food is fantastic. Of course they have world class restaurants where you can eat anything you want. But its in the desert, sitting in the EZBA (camp in Arabic) that you really start to test your limits! Every meal in Dubai is like a Thanksgiving meal in the USA. They eat late at night and they eat a lot of food. They make up massive dishes full of jasmine rice, goat and lamb. Camel is a delicacy which I didn’t try but I hear the meat under the hump is the best. While I stuck to the goat which is a lot like a greasy beef, guys like Matt Martelli dove in to try the brain, tongue and even the eyes! I wasn’t going there, especially after looking at their faces, but they pretended they liked it, I stuck to what I knew I would survive with! If you are fan of Dates, they have some of the best Dates in the world there! The bread is also fantastic and if you like coffee then you will love the UAE!

Baja. One of my absolute favorite places on the planet. You can’t talk about Baja without talking about the food. For me, the trip always starts off in Puerto Nuevo, the Lobster Village, just south of Rosarito Beach. I always tell whoever is traveling with me if its their first time that I am about to treat them to one of the best meals of their lives. Puerto Nuevo always delivers on that promise. There you order lobster whole, its cut in half and grilled. They serve it with hot drawn butter, refried beans that are clearly cooked in lard, and a bowl of hot Mexican rice. The kicker is the fresh and hot flour tortillas. No joke, its my favorite meal in the world. As I type this my mouth is watering! Once we hit Ensenada it turns into taco time. From the day we arrive to the day we leave its taco stands, cold beer and Real Coca-Cola in a bottle! While many love the carne asada I stick almost exclusively to Adobada which is a seasoned pork. The meat is red is almost always cooked on a rotating spit. Of course you have to mix it up with a good fish and or shrimp taco! I know what you are thinking, you aren’t cooking that stuff! And you are right, but sometimes when you travel the best meals are at the local spots. Baja is one of those places!

Whether you are traveling or not the thing I want to push to everyone reading this is to keep trying new things. Its a challenge for me and I think we all can agree that we seem to find a food rut at home where we all eat the same things over and over again. I asked Guy, “how do you force yourself to not bore you and your family with the same meals over and over?” his response “open up a good cookbook, pick a meal and say thats what we are having! Whether it sounds good to you or not, cook it, try it and I promise you will find things you never thought you would like.” This has proven true for me and while we still always turn back to the things we know we like, finding new things has been fun for me.

Anyway, I need to go eat… its dinner time! 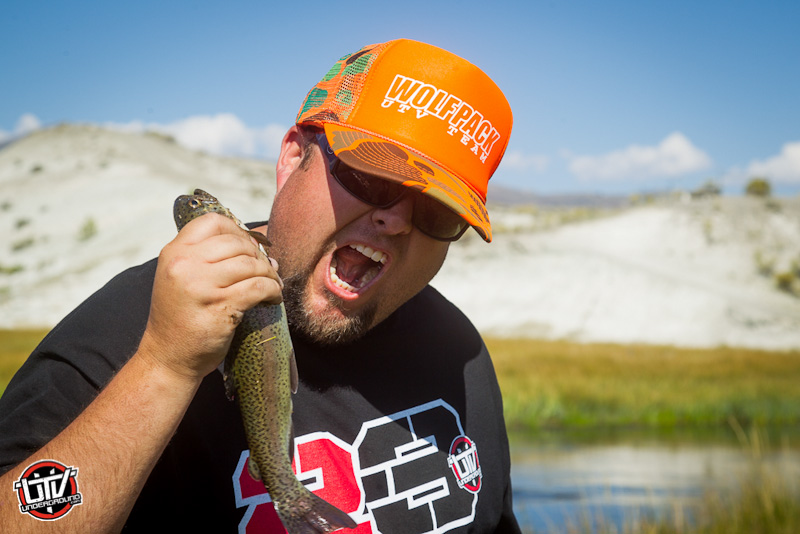 Big thank you to Camp Chef for all of their support in providing us some awesome cooking gear! Check them out at www.campchef.com