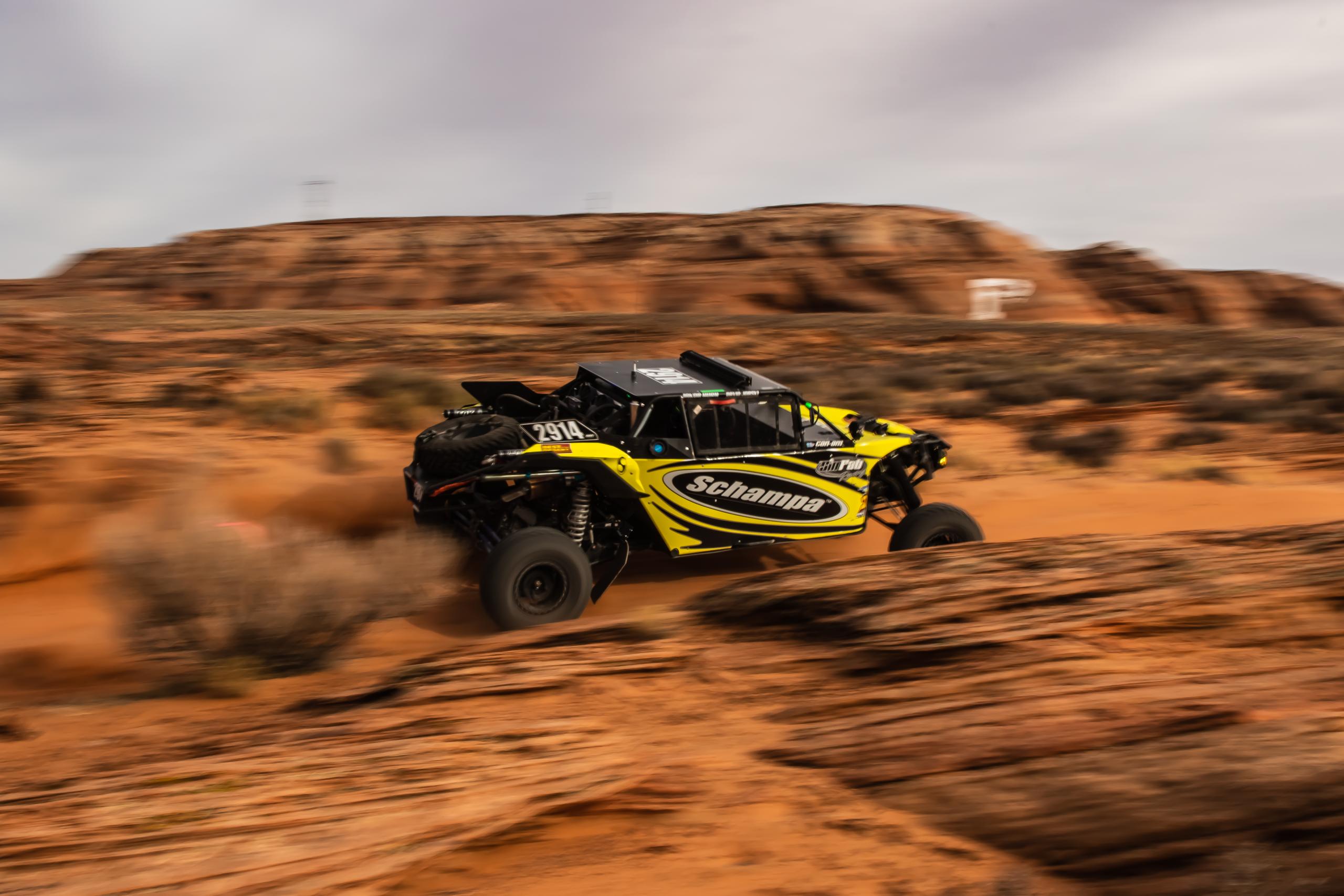 Photos and Story by KarakurtMP

The AZOP Rowley White RV Series held its third round of the 2021 season, the P Mountain Grand Prix and Hare Scramble sponsored by SinFab Racing and Page Honda Polaris in Page, Arizona.

The P Mountain Grand Prix and Hare Scramble began Saturday with the Grand Prix on a 5-mile track through the rocky and soft sands of the canyons and desert. Sunday was the Hare Scramble on a roughly 13-mile track though the original track and much further into the high-speed whoop sections around P Mountain – the big rock across from Horseshoe Bend with the letter “P” painted on its side – and back up and around then back down through the canyon to the finish line. This course ate up bikes and UTVs alike thanks to the deeply rutted washes and turns, and the hidden rock edges jetting out of the loose fine sand.

The chilly Saturday morning began with a new race schedule for the UTV 170cc/250cc classes. First to the start were the Advanced and Modified classes of the UTV 170cc/250’s. Before the green flag was waved, 15 racers lined up at the start eager to take off. Green flag was waved and the first wave off down the very tight Pee Wee track down along the fence line of the neighboring steel yard, and 180 degrees back up under the power lines. After 14 laps #186 Allison Furnell took 1st place with a 13 second lead over 2nd place #1866 Cameron Leaming, and 3rd place #121 Cash Harper. The second half the UTV 170cc/250cc took off later for their own race on the same track. #226 Reed Rather placed 1st over 2nd place #87 Bentley Rainer, and 3rd place #210 Triton Lawrence. Sunday’s race resulted in a changeup in podium positions. In the Advanced and Modified race #258 Declan Shield brought home 1st, in 2nd came #186 Allision Furnell, and 3rd place #175 Connor Power. For the Beginner’s race #226 Reed Rather again placed 1st, 2nd #210 Triton Lawrence, and 3rd place #45 Dexter Warren.

To finish the Pee Wee classes was the Pee Wee Bike race. Saturday brought out 13 entries to the starting line. The Pee Wee track was extremely fast for the bikes with the long straight away along the fence. After an amazing 20 laps, a lap more than 2nd and two laps more than 3rd, #51 Tanner Sutton out of Williams, AZ placed 1st. Coming in 2nd was #17 Courtney Curley racing in her home town of Page, and in 3rd place was #301 Jayce Tracy also from Page. The following day, the Pee Wee Bikes were the first on the starting line. Tanner Sutton again blew his competition off the track quickly taking 1st with 21 laps, a lap over 2nd place #45 Shay Anderson. With 19 laps #279 Antonio Laybarrios took home 3rd place.

On Saturday, the Mini Bikes and Pull Start raced on the same Grand Prix track. The pull starts resorted to pushing their bikes up the steep sandy hill on the back side of the track. #020 Hayden Thomas dominated the pull starts with a one lap lead for a total of 3 laps coming in 1st. #021 Garett Rymer came in 2nd and #044 Lee Foster came in 3rd. For the Mini Bikes, #016 Asa Vemette placed 1st with a near 6-minute lead over #033 Lance Guevarra, and 3rd place #74 Blake Gilbert.

The following day, Sunday, the Pull Starts raced on the Pee Wee course. What a riot that was! While these guys are serious about earning their trophy, they still know how to have some good fun and bring a bit of comic relief. After the first lap, #340 Johnny Rudell changed into a clown outfit with a mask that fit over his helmet and painted on the back “free candy”. At times it was difficult to distinguish between if the other Pull Starts were running away from the clown or chasing him for the free candy. No report on whether there was indeed “free candy”.

Mini Quads were up next with 5 entries. All Mini Quads finished on Saturday with 3 laps. Coming in 1st was #666 Rachel Skaggs out of Williams, AZ. Behind Rachel coming in 2nd was #47 Ryder Nugent, and in 3rd #187 Jose Llamas.

The next day, Mini Bikes and Mini Quads raced at the same time on the Grand Prix track. It was interesting to say the least to see quads and bikes on the track passing each other at times. Rachel Skaggs #666 held her podium position coming in 1st again with Jose Llama placing 2nd, and #040 Sarah Tsosie coming in 3rd. In the Mini Bikes classes, Asa Vemette held onto the top box, Lance Guevarra kept his position in 2nd, and #213 Eddy Panuco placed 3rd.

Big bikes took their chances on the track next. Between the crowded start line with 75 riders lined up on Saturday and riders itching for the green flag, you could cut the tension in the air with a butter knife. The first wave of riders was off, and there was no catching them. The top 3 were all Pro riders with a lap lead of the rest of the riders. All with 6 laps, #199 Jarrett Curley came in 1st, #003 McQuin Hair took 2nd, and in 3rd was #004 Jared Hair. Sunday’s Hare Scramble saw the same riders and podium positions with a total of 5 laps, or roughly 65 miles.

Coming up on the Big Quad race there were 21 entries on Saturday and 16 on Sunday. Logan Huff #045 out of St. George, Utah placed 1st in the Grand Prix and in the Hare Scramble. Both days of racings resulted in the same podium positions. Erin Simmons #043 from Page placed 2nd, and #022 Noah Harris from Lears, Colorado placed 3rd.

The UTV 570cc classes raced the Grand Prix track both days. All the drivers finished the race on Saturday with #14 Ryan Bedoya coming in 1st, #147 Braden Krah in 2nd, and #157 TJ Siewers placing 3rd. Sunday saw a changeup in podium position with TJ Siewers working his way to the lead to take home 1st. Braden Krah gave up P1 for 2nd place, and #566 Alexia Leaming came in 3rd.

The last up to race this rough track were the big UTVs. Drivers and their codrivers took off while their pit crews waited and sweep riders staged in the back side of the track. #22 Glen Banta rolled his Can-Am shortly after taking off instantly putting him out of the race. The track was unforgiving for UTV with the long whoop sections and hidden boulders jetting out of the fine loose sand. Saturday’s Grand Prix resulted in #320 Dakota Smith placing 1st, #999 Bo Radavich placing 2nd, and #314 Katin Ladin in 3rd. After Saturday’s beating on the UTVs, 16 of the prior day’s 21 drivers came to the start. The 13 miles of the Hare Scramble was going to finish whatever the Grand Prix track did not. The first lap took out two of Saturday’s podium winners, Dakota Smith and Katin Ladin. In his hometown of Page, Arizona, #27 Ian Sessions with a minute lead crossed the finish line in P1. Coming in 2nd was Tyler Hurlock #1994 out of Cave Creek, Arizona, and in 3rd was #2914 Dan Hurn out of Peoria, Arizona driving his Can-Am.

As always, the AZOP Racing Rowley White RV Series would like to thank SinFab Racing, Page Honda Polaris, Rowley White RV, and all its sponsors, staff, volunteers, racers, and spectators for making this another great race weekend.  For complete race results and upcoming events visit www.azopracing.com.