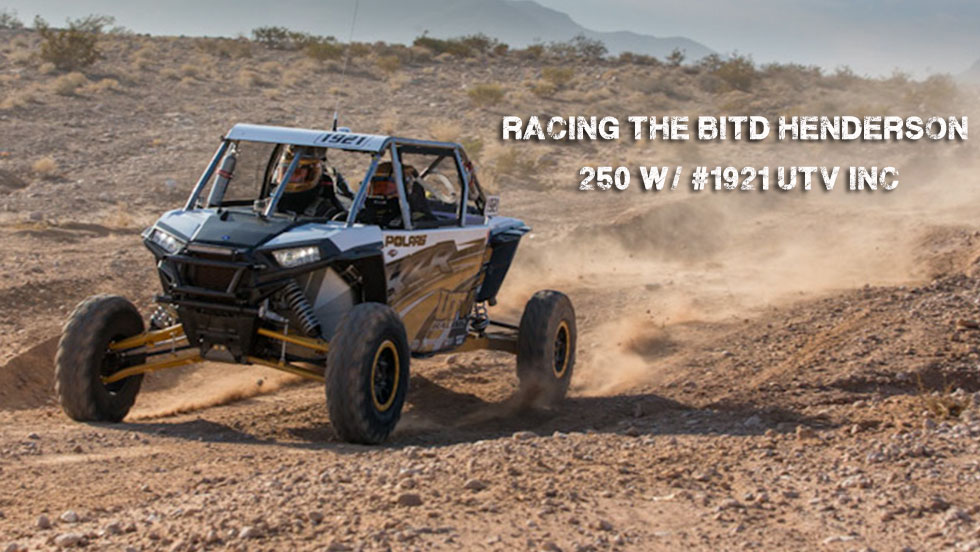 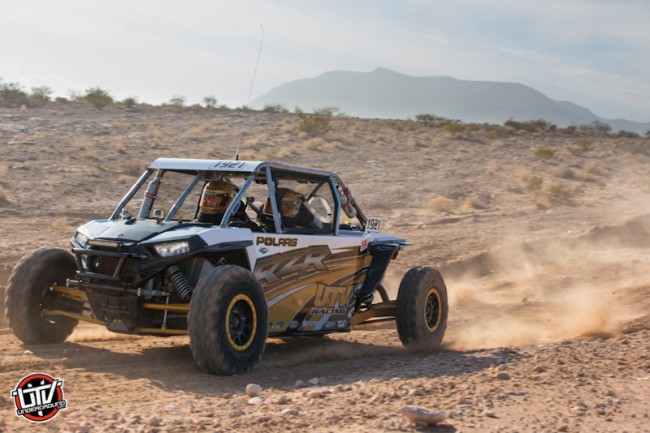 Well, where to start? We just got back from our win at the Baja 1000 and we had a photo shoot scheduled for the following week. They wanted the car in the same shape as it had finished Baja, So we left the car untouched. I had no intentions of racing the Henderson 250 race. We had a lot of work ahead of us to clean up the RZR and a lot of prep to get done before the first race of next year on Jan 9 2015, the Parker 250

Ok, ok, so by now you should all know I am addicted to this racing thing. I also would like to run the Henderson race because it is also a preview of a lot of the race course of the Mint 400 next year. Against better judgment and no sound decision making capability (as I am addict) I asked the guys on the Monday before the Henderson race to get the car together and cleaned up for the race. So the guys have 4 days to clean up the car, fix small issues we had known about from Baja and replace all wheel bearings, install some new Fox Shock springs, service the clutches and a quick fluid change to go race.

Had we gotten everything done to win the race? Guess we will find out. So race morning we start at 9am and line up side by side with two of us starting every 30 seconds. In the spot next to me is Brandon Schueler, he has won the season points championship 5 times. If he kicks ass in this race it will be his 6th BITD Season Points Championship. I had the pleasure to race against him before, he is fast and smooth. He also is the top Factory sponsored racer for Polaris with 5 championships under his belt you can understand why. 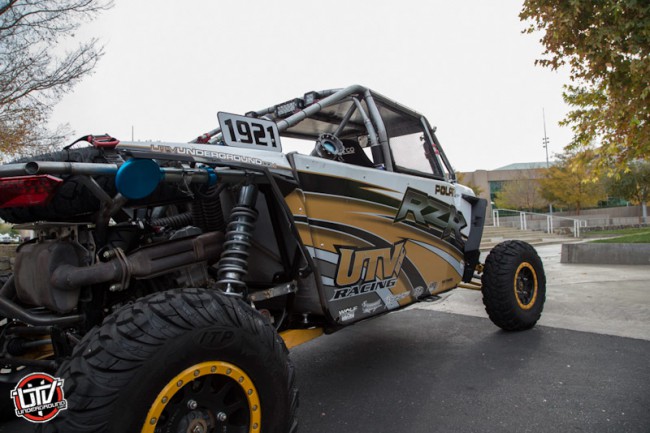 Anyhow, we get lined up and its go time! Green light – I floor the go pedal on my Polaris RZR but am no match for the faster car Brandon is driving. He is running some of the top secret, latest, greatest parts from Polaris’s top secret race shop. He just pulls away from me leaving me in his dust! I can see him passing the top 5 cars that started in front of him and I just can’t catch him as he passes them. I do get passed the other racers and we slowly make work of the first 5 UTV’s ahead of him. I see he passed the race leader Craig also in a Jagged X RZR so I slowly make my way behind Craig, currently the race is sitting like this: 1 2 3 Brandon, Craig, and I. These two are crazy fast and as I follow them. Craig is 2 feet off Brandon’s rear bumper and they are railing into the corners hard and repeatedly launching into the air. Then there is a fork in the road and Craig shoots to the left and gets passed Brandon again to be the lead car. A white truck comes up behind me and I quickly let him pass. So, I am now 4th in line and starting to eat a little dust. In the middle of it all I see a large rock in the road on my left, swerving at the last minute my car slides a bit sideways and I hit a large rock on the right.

Oh well, we pull over and Boner gets out to change the tire. I sit in the car and watch all those guys we just worked so hard to pass, pass us back. Boner has a few small problems and it takes him 7 minutes to get the flat changed and everything put back in place. He jumps back in the car and we are off and racing again.

A LoneStar Racing car had just passed us and we catch him pretty quick as he quickly moves over and lets us by. Unlike the Can-Am 1927 car that we had been behind in the whoops earlier. One of those guys that thinks he is fast and will not hit the brakes and get out of the way as soon as he is caught. No, this guy in the Can-Am proceeds to hammer his car as it flounders thru a long whoop section. We watch parts of his car get tore off from behind. Oh well, back to racing. We are now hauling ass through a tight mountain pass section and get caught behind a RZR with a broken rear axle. Yep, you guessed it, we give him the siren and he speeds up! So we are stuck behind him for a while as grease slings from his car onto us and he finally finds a spot he feels comfortable pulling over at. 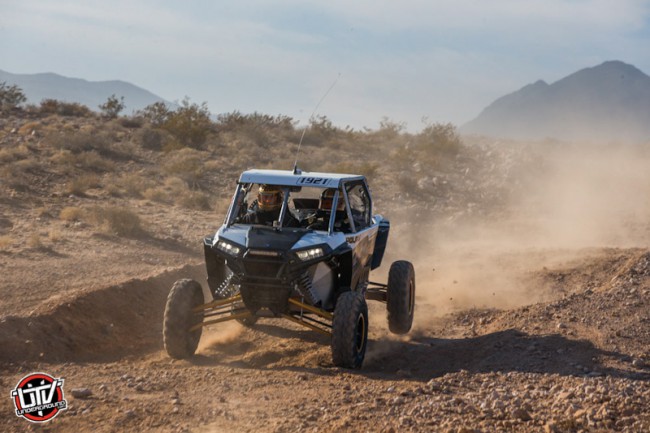 We are back in the race and passing traffic! A bad ass machine with RR on the side is coming up on us fast! You know what I do? Yah, I turn the steering wheel and get out of the guys way so I don’t slow him down! Yup, that’s what you are supposed to do when somebody faster than you is behind you!

Ok, so we have passed all but 3 cars in our class back. We pull into the pits to get a new spare and are told we had the 3rd fastest first lap time. Remember that includes our 7 minute flat tire change! We are off hauling ass again and having a blast. We make it to the gravel pit and launch off the two large rollers and get some good airtime. “I shouldn’t have done that” I said to myself as it is really hard on the car. I have no self-control, I tell myself, shortly thereafter as I hear something clacking in the back of the car. As I head into a hard right turn I hit the brakes, um… yah… NO BRAKES! I get the car pulled over again Boner gets out and says: We broke a rear axle, it hit the brake bleeder valve and loosened it up. So he tightens it and jumps back in the car. We are off again after pumping the brake pedal a few times but he forgot to pull the broken axle and CV out, so it is still clanking around. Yep, you guessed it, The broken axle now hits the brake line and we lose all brakes and brake fluid! We have 25 miles to go until the pit so we decide to call it a day instead of risking the 25 mile drive and causing more damage since we cannot stop the car. Like I was telling you, we really just showed up to check out the track for the 2015 race season. Even though that was the plan, we also show up at every race with one strategy – Haul ass, pass everybody we can and win! Goodbye 2014 rookie season, hello 2015 pro season! 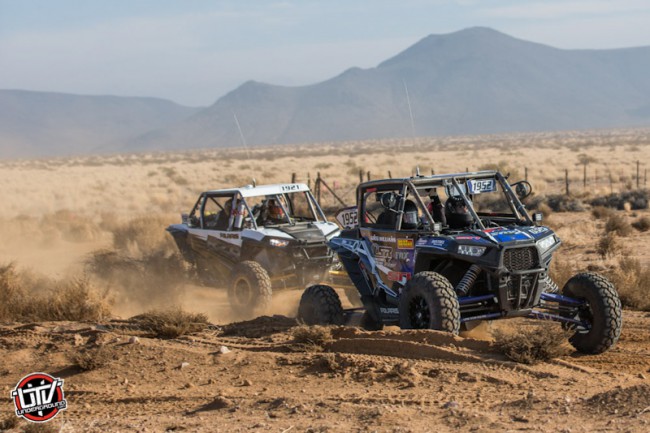 Thank You all so Much for your Support in 2015
Polaris RZR
UTVinc.com
Fox
ITP Tires
Method Race Wheels
Rigid Industries
Lonestar Racing
Mad Media and UTVunderground.com