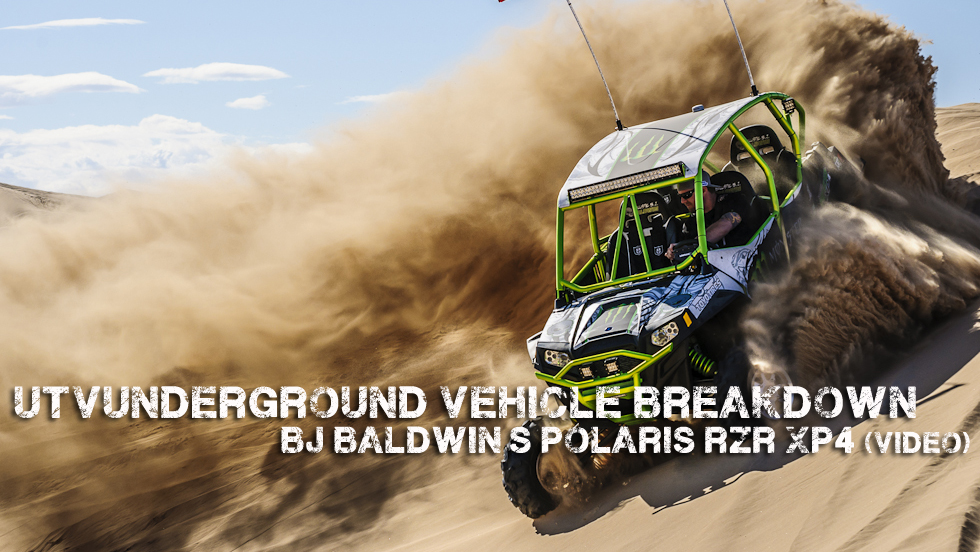 Well you all have seen the UTVUnderground vehicle SHAKEDOWN series we perform on new factory models. Well, now we are introducing the new UTVUnderground Vehicle BREAKDOWN series where we will showcase some of the sports most tricked out and custom UTV’s! We felt it would only be proper to kick the series off with the 2012 SCORE Trophy Truck Champion “Ballistic” BJ Baldwin’s sick 2013 Polaris RZR XP4.  UTVUnderground has worked hand in hand with BJ and his crew to build the ultimate 4 seat UTV so we couldn’t be more excited to help BJ BREAK IT DOWN! 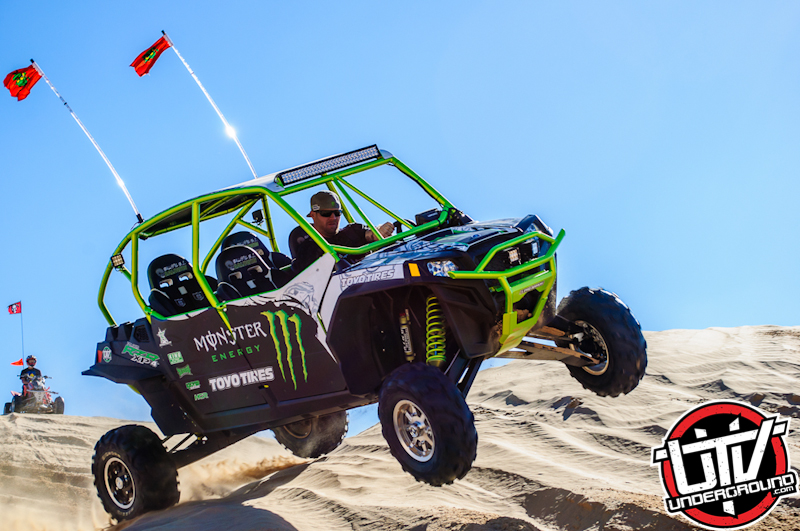 BJ approached us back in October with the idea to build a full custom RZR XP4 to take to the dunes with friends and family.  The goal was to build something that he could not only rip the dunes in but also haul all of his friends and family around in style.  Thanks to help from our friends at Polaris Industries we had a brand new 2013 Polaris XP4 delivered to BJ’s shop in no time and his crew went right to work stripping it down before the 2012 Baja 1000 (which BJ would go onto win) to get it ready for the build up!

BJ had his sights set on a low, yet roomy cage by SDR Motorsports that incorporated opening doors but had the look of sealed race panels. SDR did a fantastic job developing this cage that not only looks good but also still allows for 4 large adults to fit in the car with plenty of headroom, something BJ was adamant about.  Next on the list of must have’s for Baldwin’s RZR was suspension. The XP4 comes with the best suspension on the market but that just wasn’t enough for the professional off-road racer. He reached out to shock sponsor King Shocks for their advice. King quickly pointed him in the direction of HCR (Hard Core Racing) to whome they have worked closely with in developing an aftermarket +3 long travel suspension. In no time BJ had custom King Shocks, Summers Bros. axles and an HCR Racing suspension in his shop and ready to be mounted up! 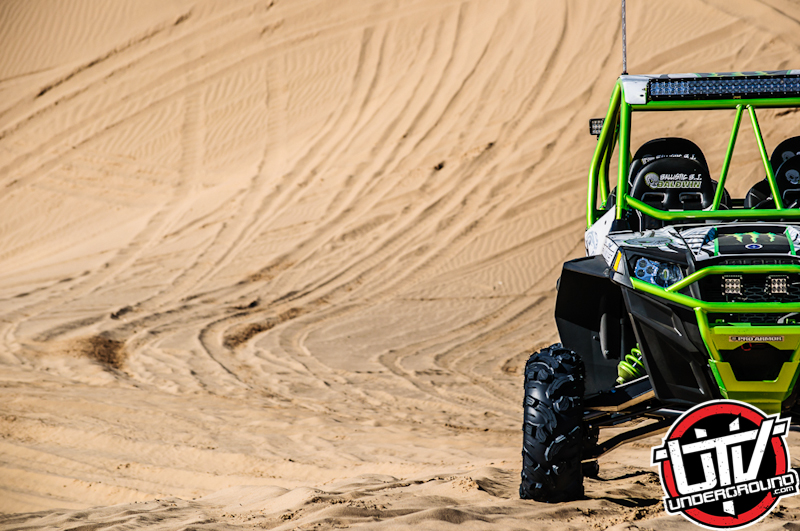 With chassis and suspension taken care of we moved onto the accessories. While we put the call into Fred Brayton at Pro Armor for Seats, Harnesses, and a bumper, BJ jumped on the horn with lighting sponsors Rigid Industries for all of his lighting needs.  Pro Armor went to work on a set of custom “Sniper” seats that would incorporate the “BALLISTIC” BJ Baldwin logo in the headrest! Their innovative 5 point harnesses would be the belts to hold BJ and his passengers in safely on those wild and crazy dune rides! Rigid Industries jumped right in with providing BJ with some of the coolest lights we have ever seen used on a UTV.  Now while we have seen and used all of Rigid’s lights before, this would be the first time we would ever see custom Monster Energy green lamps used in all of the LED lights.  BJ installed a 30″ E-Series dual row GREEN LED on top of the roof, 2 GREEN Dually’s on the front Pro Armor bumper, 2 GREEN Dually’s on the rear portion of the cage to be used as wide angle driving lights, a 10″ E-Series bar out back for reversing and a plethora of GREEN SR-Mini lights mounted around the undercarriage to give that green under glow look when parked at night!  A pair of green LED Safe Glow Whips would top off this over the top lit UTV!!

Its impossible to have a party in the dunes with a stereo system so BJ and his crew installed a 5 speaker SSV Works system in the RZR to make sure the party stays live all night long! To top off all the looks BJ had the cage, suspension, and bumpers all powdercoated “Anti-Freeze” or “Monster Energy” Green to match his #97 Trophy Truck! From their the boys at Patrick’s Signs went to work wrapping the XP4 to match the Trophy Truck both inside and out! It is impossible to not recognize this XP4 when rolling through the dunes and when parked next to BJ’s trucks it really compliments his off-road stable nicely! 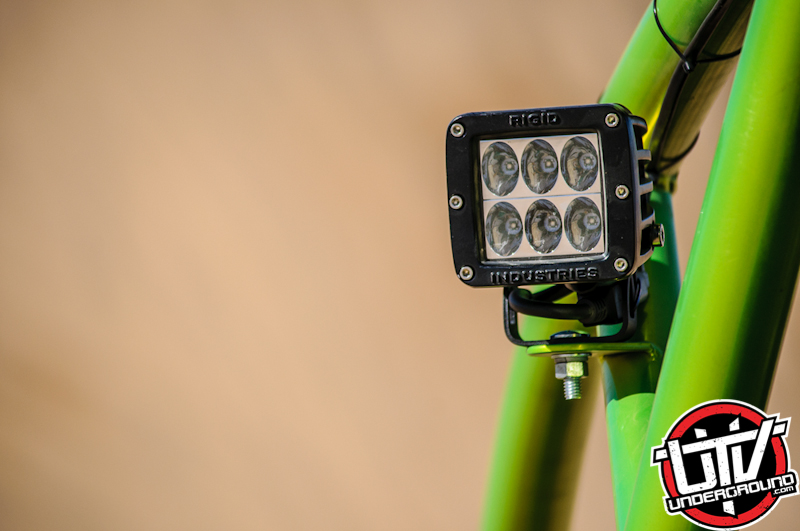 Now we talked about all the bling, what about the POWER? The XP4 is no slouch in stock form, but just like the suspension BJ needed MORE. So he called upon engine sponsor Kevin Kroyer of Kroyer Racing Engines in Las Vegas, NV. In the world of off-road just the mentioning of KROYER when talking about engines will cause people to perk up and pay attention.  People know what Kevin and his staff at Kroyer are capable of in the world of V8’s but surprisingly his name in UTV is still pretty un heard of unless you race or have raced in BITD or Lucas Oil.  Kroyer is the man behind many championship winning UTV’s (RJ Anderson, Jagged X & Coastal Racing) and is quite possibly the very best in Polaris horsepower prospecting. Kroyer went to work on BJ’s RZR building him a 999cc fire breathing monster that cranks out around 130hp! The XP4 comes with 88hp stock so you do the math. To top it off they installed a set of Muzzys Performance dual exhaust and BJ had the mad scientist Mark Holz himself tune the clutch while out in Glamis for Camp RZR.  What has resulted is one of the most powerful XP4’s in the dunes today!

We hope you enjoy our very first UTVUnderground Vehicle Breakdown.  Special thanks goes out to the boys at Mad Media for knocking out yet another sick video for UTVUnderground.com. Thank you to Brendan Klein and Ernesto Araiza for all the sick photos and of course thank you to BJ Baldwin himself for taking time out of his new years weekend to film this clip with us.