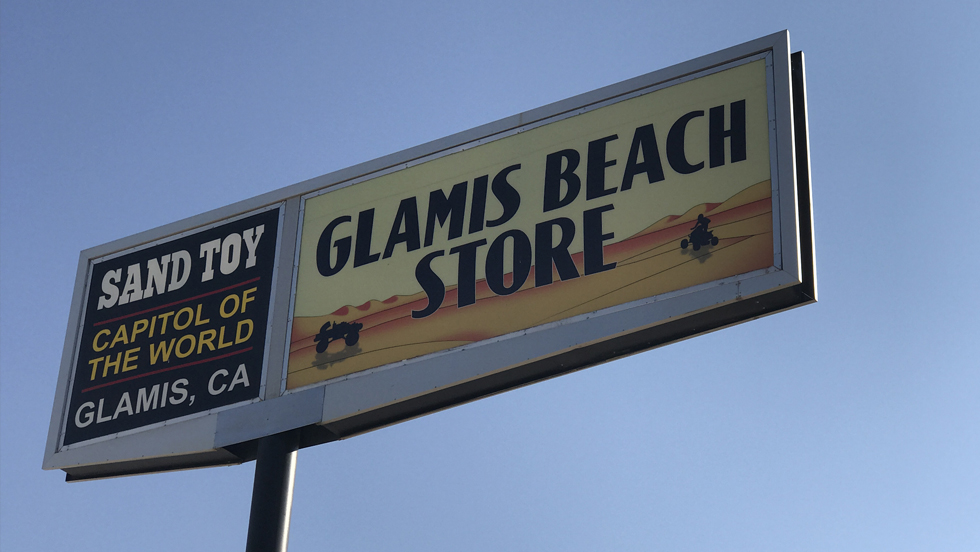 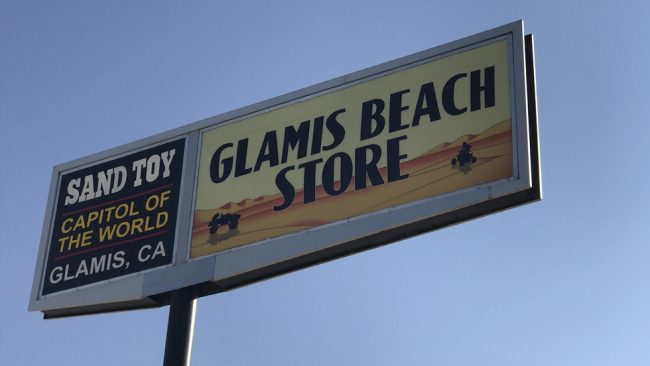 Since 2014, rumors have swirled around the sale and purchase of the privately owned property in the Glamis dunes which is located in the Imperial Valley desert of Southern California. The property includes the legendary Glamis Beach Store, “vendor row” and area across Hwy 78 housing the Glamis Dunes Storage operation. Much discussion has surrounded Polaris Industries being the top suiter in acquiring the 120+ acre parcel amongst other rumored buyers. Until now, no definitive details or confirmation has been made on anyone officially purchasing the store and included land.

During the course of these past few years, a lot has changed surrounding the store including the passing of longtime property owner and operator Eugene (Beau) LeBlanc on February 1, 2016. Mr. LeBlanc purchased the Glamis Beach Store and its land in 1979 and alongside his first and second wives Katie and Bessie and daughter “Jeannie”, operated and transformed the store into a local icon for dune riders frequenting Glamis. The seasonal operation has seen many changes over the years, but for those who frequent Glamis, the store and surrounding area had become a popular hang out and destination for off-road enthusiasts and local regulars of the dunes.

While we can’t speak to all of the changes and details that have surrounded the property since Mr. LeBlanc’s passing, we do know that daughter Jeannie has and continues to work hard alongside a handful of others to keep the store open and operational during the riding seasons, servicing visitors and maintaining the store’s presence as a destination for riders. What we do know, is talks of the sale of the property had increased both publicly and privately and in August 2017, social media lit up with community members claiming the LeBlanc family had agreed to sell the property to Polaris for an undisclosed amount.

Last month (August 2017), while social media was in a frenzy over the then unconfirmed purchase by Polaris, we were contacted by Polaris to meet with Chief Marketing and Retail Officer Craig Scanlon, and Corporate Development & Strategy Senior Vice President Bob Mack. We were invited to Glamis for a meeting to bring details back to the community and put the rumors to rest.

Because of this meeting, we can now confirm that Polaris Industries has in fact signed an agreement to purchase the Glamis Beach Store and its 120+ acre property and expects to close the transaction prior to the start of the 2017 riding season. Until the closing of final paperwork, “Mama Jeannie” will continue to manage and operate the store and surrounding property. 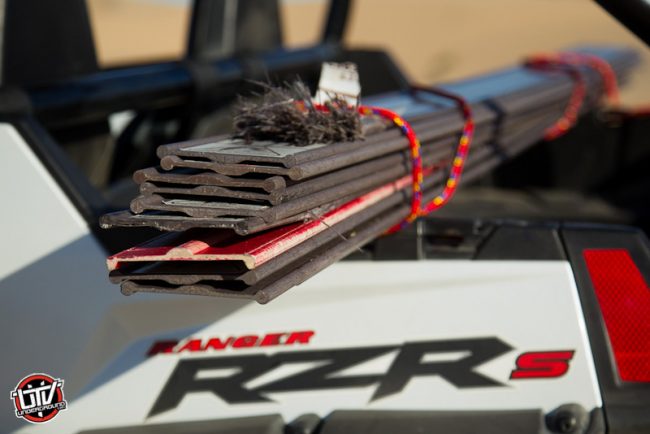 We are also able to put to rest that Polaris would not be converting the property into a fast food court, water park, or “mega mall” like what was rumored all over social media. Instead, Polaris would keep the Glamis Beach Store open for business for the 2017/2018 desert riding season and is inviting all of the vendors we are used to frequenting the popular vendor row area of the property back as well.

What changes may take place surrounding the store during this season will be minor but will almost all be improvements to the existing building and storefront. In addition, the Glamis Dunes Storage business will also remain as is and open to the public. The same can be said for Joe Fab’s repair shop, it too will be business as usual.

“The purchase and ownership of one of America’s most iconic riding areas and destinations is a true honor for us. It’s a privilege and priority to preserve the traditions of Glamis and the store itself, and we take seriously the responsibility of protecting access to the dunes for all off-road enthusiasts. We look at this new opportunity as a way to not only preserve and build upon all that’s great about Glamis, but to improve the experience for those who spend their time with friends and families recreating in the Glamis dunes,” stated Bob Mack, Polaris Senior Vice President of Corporate Development & Strategy.

Much of the commentary from enthusiasts on social media surrounded the fear of Polaris eliminating the beach store and commercializing Glamis. This was something we discussed at length with Scanlon and Mack during our visit. Currently they are in the process of building their long term plan for Glamis, but I can tell you the vision and intentions are well inline with what most enthusiasts would support (in our opinion).

The store will remain as is for the 2017/2018 season. Whether or not they would choose to remodel the current store or rebuild it entirely will take some time to decide. The store itself is in need of some repairs, but Polaris intends to explore all options before making a decision. Polaris will add staff to assist in operations of the store and management of vendor row. However, we discussed at length the importance of retaining and preserving the history of the store and the history of Glamis and the need for building upon the store as a true destination for enthusiasts spending their time in Glamis. Re-opening the bar & pizza restaurant was also discussed but Polaris could not say either way what they wanted to do there. It is in our opinion that Polaris will take a conservative approach to any changes or additions to the property.

When asked about the rumors being spread on social media surrounding the closing of the beach store and building of a fast food filled, mega mall of sorts, Craig Scanlon had this to say:

“We have a tremendous amount of respect for all that the LeBlanc family has done & the Glamis Beach Store itself. We have no intentions of running the store or vendor row any differently than in the past for the 2017 / 2018 riding season. And, although we are fans of coffee and In-And-Out burgers, we have no vision of bringing a mega mall or franchising out the Glamis sand dunes,” stated Polaris Chief Marketing and Retail Officer, Craig Scanlon.

We discussed for hours ideas and ways to improve the beach store area while retaining the history and traditions of the culture. Scanlon mentioned the importance of building upon the newly formed traditions of Camp RZR and bringing other types of events into the area to further reward and entertain enthusiasts. Family is very high on the priority list for Polaris and their RZR brand. We have seen that for years at Camp RZR which is as much about the kids riding along as it is for the adults purchasing and driving the machines they sell. This should excite enthusiasts and regulars of the dunes.

During Camp RZR events, Polaris has given enthusiasts hundreds of thousands of dollars in free repairs and parts, entertained them with concerts and celebrity appearances, hosted concerts and demo rides and so much more. While there will always be some who will attempt to find fault in either Polaris’ intentions and or the event itself, the reality is, Camp RZR has brought life back into the Halloween Weekend making it a major family friendly kick off holiday. We expect to see Camp RZR grow in the coming years and expand into possibly multiple events with a more permanent event area put in place on the purchased property.

“We are open to explore all ideas right now, but what we will not do is rush into Glamis without making a firm and sound plan. What we can confirm is this, we are not going to come into Glamis and attempt to make it all about Polaris. We fully understand the traditions that surround Glamis, and it’s those traditions that we want to preserve and build upon for future generations of off-road enthusiasts. Glamis is a special place and we will work to keep all that is great about Glamis intact and help it flourish,” stated Polaris Chief Marketing and Retail Officer, Craig Scanlon.

Beyond Camp RZR, Polaris has also contributed to the American Sand Association (ASA) and was a driving force behind the stake-pull event that celebrated the reopening of thousands of acres of dune riding land in Glamis. Polaris understands that they will need to take a larger interest in supporting the ASA and looks to do just that. One thing we all could use, is a billion dollar corporation also looking out for our better interest against groups who look to take places like Glamis away from the off-road community. Polaris understands that you can’t just make money off of the community without putting it back into the community in ways that further protect and enrich it.

CLICK HERE TO READ MORE ABOUT THE 2014 GLAMIS STAKE PULL

While Polaris could not confirm, we would not be surprised to see some level of a service center built in the coming years. A place where enthusiasts could bring their Polaris machines, as well as other off-road vehicles, to get a proper repair or service performed. An eventual partnership with local dealers to sell machines onsite during the season also seems like a natural way of expanding, but again, Polaris could not confirm that being in their long-term plans right now.

One thing was for sure. Polaris intends on breathing new life into the Glamis Beach Store and surrounding property. Enthusiasts should expect an enjoyable experience when visiting the store in the future with improved amenities and services provided. While the acquisition, changes & improvements will take time, it was clear to us that Polaris’ intentions are all good and we as enthusiasts should give the company a fair shake. It can be a very scary thought to see a big corporation like Polaris move into such a small, tight nit community like Glamis. But, when you break it down, we should recognize that if Polaris finds value in investing into our dunes, we should welcome that investment as a means of both preserving and protecting all that we love, and thats getting out and riding in the dunes!

Stay tuned to UTVUnderground.com for more on this developing story.