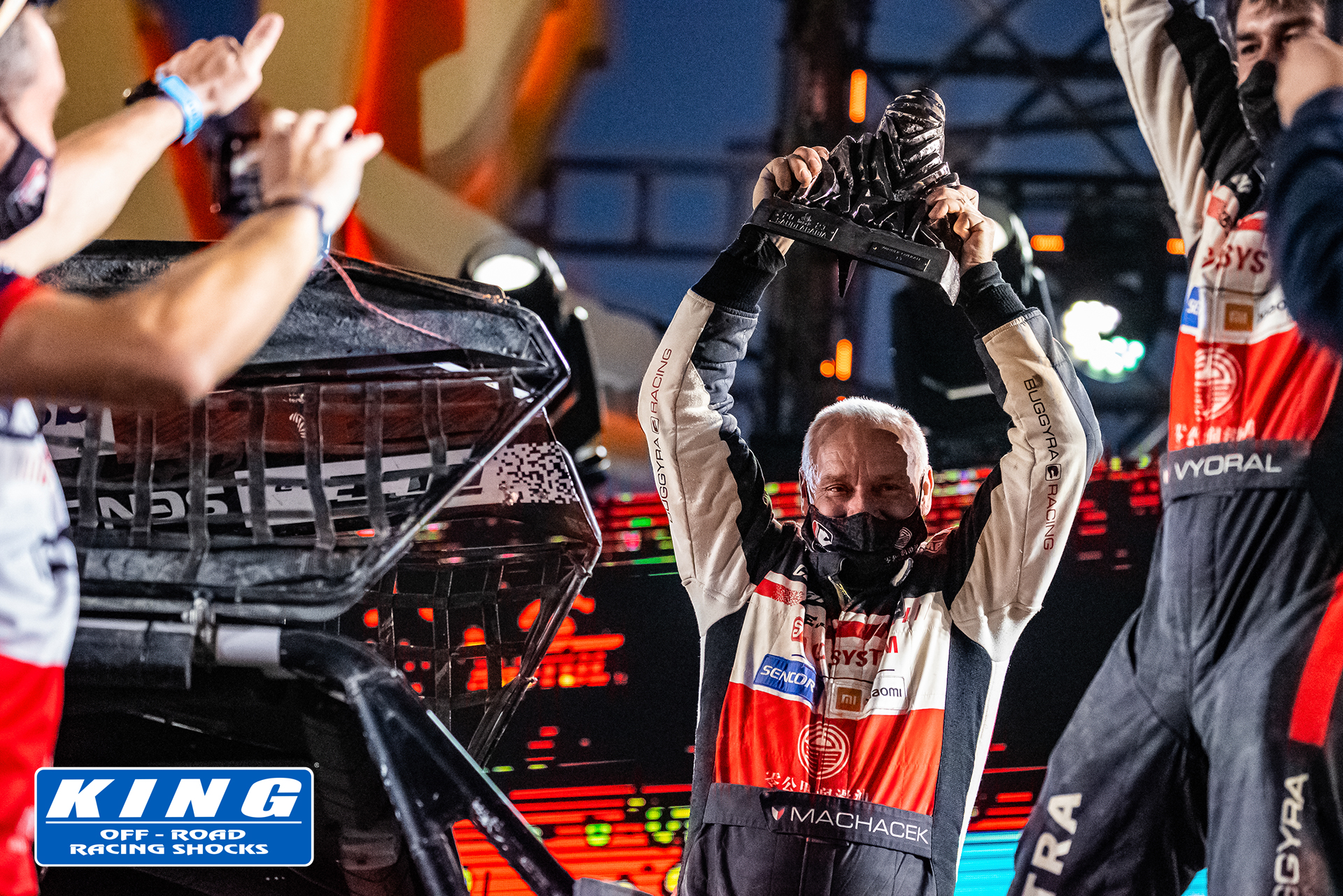 On January 2, hundreds of 2021 Dakar Rally competitors took to the start line in Jeddah, Saudi Arabia, for the Prologue. BUGGYRA’s two SSV entries for Machacek and Enge, and two trucks for Martin Soltys and another former quad champion, 2020 winner Ignacio Casale, made up four of the 310 competitors on the start list. And while this year’s event was contained entirely within a single country due to the COVID-19 pandemic, a break in tradition from past years, optimism ran throughout the team.

“I’m glad the Dakar has moved to Saudi Arabia, especially as the conditions are similar to the rallies in Africa,” Machacek said before the race. “The only thing that surprised me were the weather conditions, which made it difficult to focus on driving at night and in the early mornings.

“The standard goal is of course to successfully get to the finish line. Many crews fail to even finish the Dakar, as it’s one of the most difficult rallies in the world. I think there’s one thing that links riders and drivers in all categories: being stupid, because you go into it even though you know what you’re facing! However, the team and I have a competitive spirit, and that’s why I have goals and objectives beyond just finishing the race.”

“Saudi Arabia offers extraordinary racing scenes,” said Koloc. “We have appreciated the trend of making the Dakar stages more difficult compared to the year 2020. Long stages with long connecting sections are extremely challenging for the reliability in the SSV category.”

With those challenges in mind, the racers set off with high hopes. While Machacek would score a third place finish on Stage 1 to put himself in a decent position, early troubles would knock Enge out of overall winning contention from the first day. Undeterred by that, or even Machacek briefly sliding out of the overall top five, the team pressed on, knowing that what mattered was being there at the end.

Day after day, the pieces would fall into place. Jean-Pascal Besson would fall out of the race on Stage 6, Mattias Ekstrom would DNF immediately after the rest day on Stage 7, and Cristina Gutierrez Herrero would bow out on Stage 8. From a low of seventh place after Stage 4, the combination of those DNFs and Machacek’s consistency—including back-to-back top-three stage results on Stage 7 and 8—put the Czech legend second on the overall chart.

The next day, everything changed. Seth Quintero went from a four-hour lead in the T3 division, and a shot at the overall SSV victory, to well out of contention after losing more than eight hours on the Neom loop stage. Machacek’s deficit was suddenly a lead of more than an hour over Camelia Liparoti, and he’d grow it by nearly another full hour before all was said and done.

“Dakar results count on the 12th day crossing the finish line,” said Koloc. “Results of daily stages are often irrelevant. We knew from the beginning that our package is not ultimately fastest in terms of ‘sprint’ comparison, therefore we tried to be reliable as much as possible with the minimum number of punctures and technical problems. We have bet on the consistency and good overall tempo. Our strategy proved to be correct.

“Even Tomas Enge dedicated the entire second half of Dakar to team success. He was eating the dust of Josef for the last five stages in order to help if needed. The teamwork and dedication of both drivers is the key component behind the success.”

While more than 100 entries would come up short in the two-week endeavor, all four BUGGYRA entries made it to the finish. Better still, each entry would score a top 10 in its division, with Enge’s selfless, team-first approach rewarding him with 10th place in T3 at the end.

Beating that for 2022 won’t be easy, but if this year is any indication, the careful course that Koloc and BUGGYRA have charted for the future should set them up to do just that.

“Topping up our success won’t be an easy task,” Koloc admits. “The BUGGYRA team just opened its permanent base in Saudi Arabia in order to have the opportunity of real condition testing. We will also participate in the Middle Eastern Off Road Championships.

“The factory BUGGYRA Racing plans to race with three SSVs in Dakar 2022. The BUGGYRA Customer Racing project should be launched shortly and two vehicles will be prepared for customers during the second quarter of 2021.”

Few racers have what it takes to make it to the Dakar Rally. Fewer still will ever taste ultimate glory at the event. But BUGGYRA Racing is an example of how that can happen when the right drivers, teams, and partners like King Shocks come together—and if all goes to plan, their 2021 triumph should be the first of many.