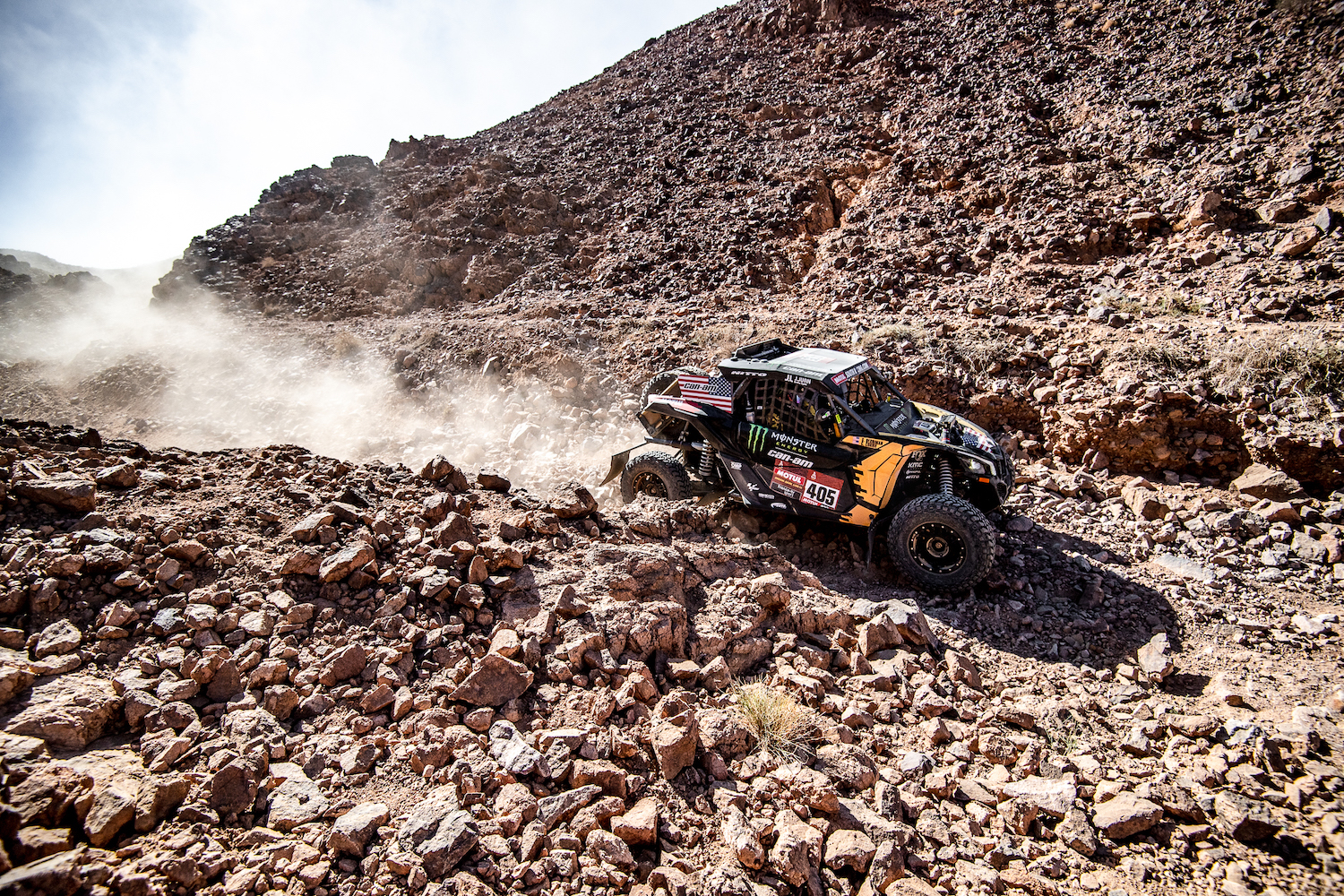 Today racers had an unusual later start. Casey and Sean woke up around 7:00am in no rush with a Bivouac leave time of 9:30am. Casey opted for a protein shake while Sean headed over to the catered bivouac meal.

You never know what to expect when it comes to the meals you get on Dakar. This one was a decent one. Omelette with hash brown and a non-pork sausage (not exactly sure what the meat was but it was edible), throw in a couple rolls, Nutella, cornflakes with chocolate milk and orange juice to drink and you got yourself a complete breakfast. There was a chicken with cheese slice but the group decided against that.

After Breakfast it was time to get ready. Today was a short 20km liaison to the start of the special. Casey finished stage 1 in 4h02m49s good enough for 2nd in class and 40th overall of all the cars. He was down 1m52s behind Domzala going into a Stage that would be very dependent on navigation. 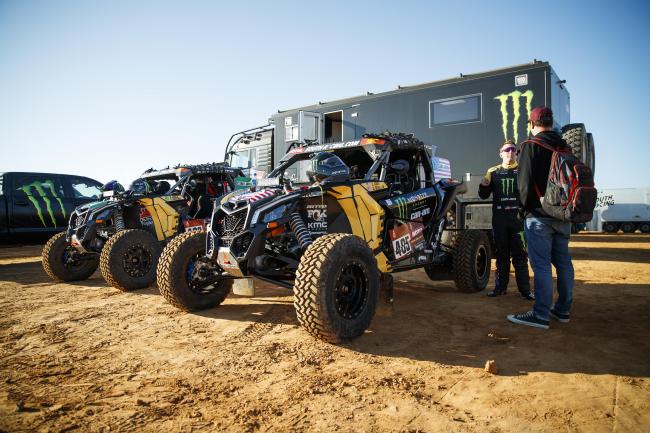 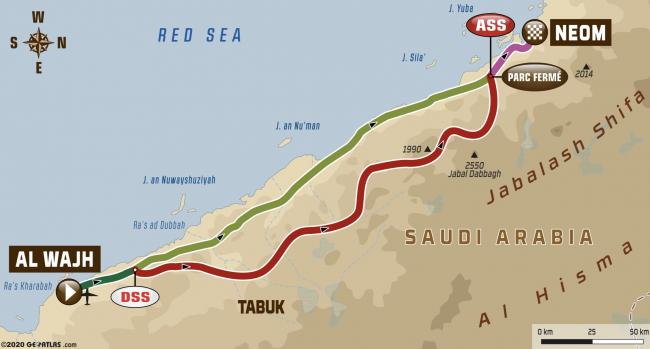 “Mostly made up of tracks, this day’s challenge is technically accessible. But you start to get a feel for what makes Saudi navigation particularly difficult. It is time to learn to trust new landmarks, when multiple tracks lead to confusion. For bikes and quads this is also the first part of the “Super Marathon” stage.” – Dakar 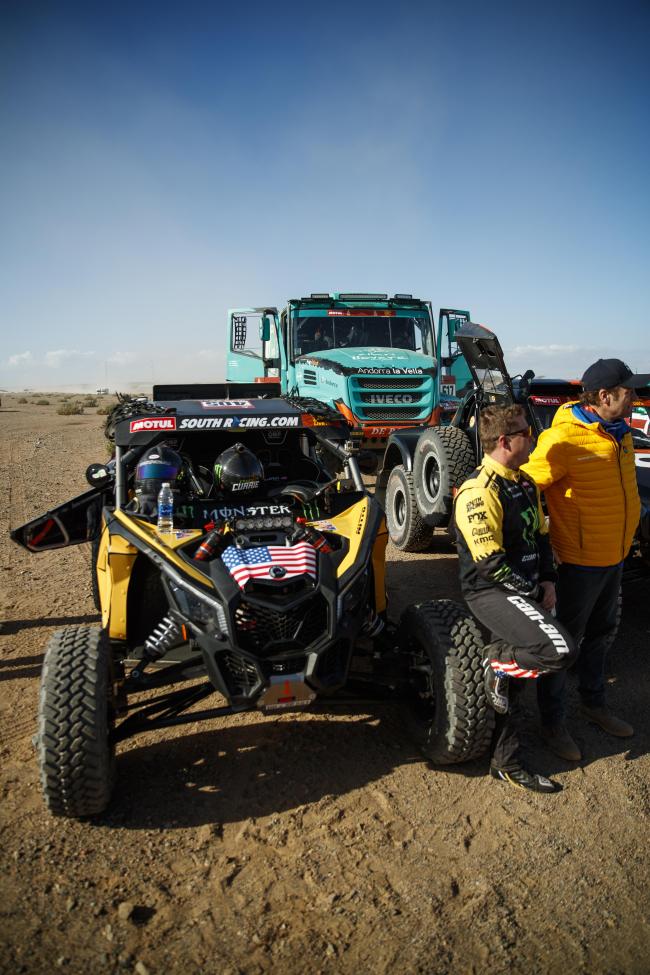 The Super Marathon is only for bikes and quads and puts them to a test of endurance. Riders are not allowed any outside assistance at the end of the stage. They are given 10 minutes once they finish to work on their bikes. They aren’t even allowed to receive parts from their teammates. The Super marathon stage is definitely a test of who can go fast and still keep their bike in one piece.

Casey and Sean headed off the line at 10:19am, 40th Car on road. He had multiple big T4 trucks ahead of him. “I think it’s good, it’ll help clear some of the big rocks out of the way” said Casey. Straight away the racers were all met with a wall of dust that would seem to linger for the entire stage. It was a tight battle off the start and at km 52. Casey was 7th on corrected time and only 01m43s behind the lead. He’d then gain some ground and move up to 4th until he got a flat that would hold him and Sean up for 4 minutes. He would make some ground up before getting a second flat and would then have to play it safe. He dropped back to 7th due to running the slower pace. Then nearly a kilometer from the finish a hidden waypoint would cause mayhem. There were trucks, bikes, cars, quads and Utvs going every which way. Casey was able to gain some time back and would move up to 5th on the stage, 14m33s behind the lead.

“Day 2, we are done. What I thought was a terrible day ended up not being that bad of a day.Looks like we’re 5th for the day. I had a good run from the beginning, looks like I was either 1st or 2nd on the road in SSV, then I got a flat that put me 4 minutes down at the three quarters mark. I was looking good and then got another flat. At that point I was 9 minutes down. Then from there, I was just cruising, we had no more spare tires so if anything went wrong flat wise I was going to lose a lot of time. We really just cruised into the finish line. Then right before the finish there was a hidden waypoint that everybody was missing. We were able to gain some ground back on some of the other teams. I only lost 11 minutes total on the overall winner today. So now I’m second place overall and about 9 minutes out of the lead. It’s a long race, the frustrations sometimes work in our advantage and we’ll keep on charging.” – Casey 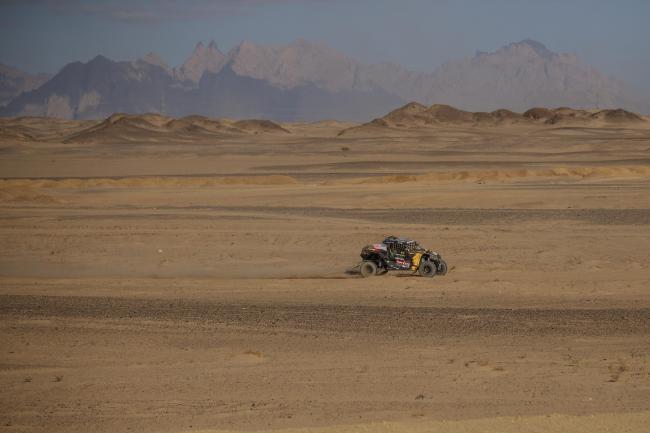 Story and Photos courtesy of CaseyCurrie.com and MCH Photo

Kariakin and Jones Strike Back, But Lopez Maintains SSV Lead at 2021 Dakar Rally