The 2019 WORCS race season is complete! Wrapping up the season with rounds 8 & 9 at Buffalo Bills in Primm, NV was awesome!

We headed to Primm on Thursday afternoon and arrived that evening. After getting everything settled in our pit, we turned in for the night. On Friday morning, we did some final prep on my car to get ready for qualifying. Round 8 was a short course race on the Lucas Oil track and we had to qualify for start positions to race on Saturday. There were nearly 30 cars in my class, so if I wanted a good start position, I’d have to be on the gas and put in some really good lap times. When it was my class’s turn, we headed to the course and got ready to qualify. I was towards the front of the pack as we took off, and quickly passed a few cars. After two laps, I felt really good and continued as fast as I could for the final two qualifying laps. Coming off the course, I was pretty sure I qualified in the top five. When the results were posted, I had clocked the fastest lap time and would be staring on the pole position for Saturday’s race!

The SXS Stock 1000 class was the second to last race on Saturday, so I spent some time that morning watching the other classes race. I was nervous, so I lined up early to get focused. The points in my class were very close and to have a chance at the championship, I would have to win on Saturday. As we rounded the course following the motorcycle on the site lap, I got ready to take off. The green flag flew and I hit the gas! As we rounded the first turn, one car got around me, but it was a 10 lap race, so I knew I had some time to take over the lead. I focused on the car in front of me, and I stayed on him as we raced through lap 1. Going into lap two, I was on his bumper and picked a different line going through the whoop section of the course. I was able to make the pass coming out of that section on the inside of a turn and hit the gas to take over the lead! With each lap, I increased my lead and was able to put a good gap between myself and the rest of the pack. After 10 laps, I crossed the finish line in 1st place! Winning the race moved me to 2nd place in the points total for the season and gave me a chance at winning the series championship the next day.

After celebrating a much needed win on Saturday afternoon, we washed my car and did some prep work in the pits to get ready for Sunday’s desert race. I was even more nervous for the race than before because the points got even closer after Saturday’s race. There were 3 of us in the running to win the championship and it now all hinged on round 9. 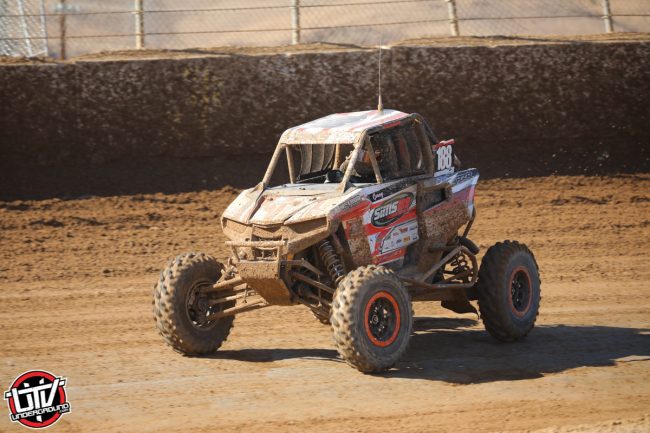 I got up on Sunday and went to watch the other races scheduled before mine. My class was the last race of the day, so I took advantage of that and watched as much as I could see of the course. Because of my win on Saturday, I was first to line up in my class. That afternoon, I picked my position and went to the line. As the flag flew, we all took off! I was second off of the line and headed out into the desert chasing the car in front of me. I stayed on him trying to make a pass whenever I could, but the course was dusty and it was difficult to see. I was determined and did not give up, staying just two seconds behind for most of the race. About half way through the 45 minute race, my 4-wheel drive went out and it slowed me down quite a bit. I tried several things to get it to engage again and finally after turning my car off and slowing way down, I felt it engage and I took off again. I had not lost my second place position, and I was going to do my best to catch back up. I did what I could as I hit lapped traffic to make quick passes and I was determined to get to the front. In the end, I couldn’t get it done and came in 6 seconds behind first place. I had given it everything I had and I was bummed to say the least. I finished the race in 2nd place and came in 2nd overall for the season. 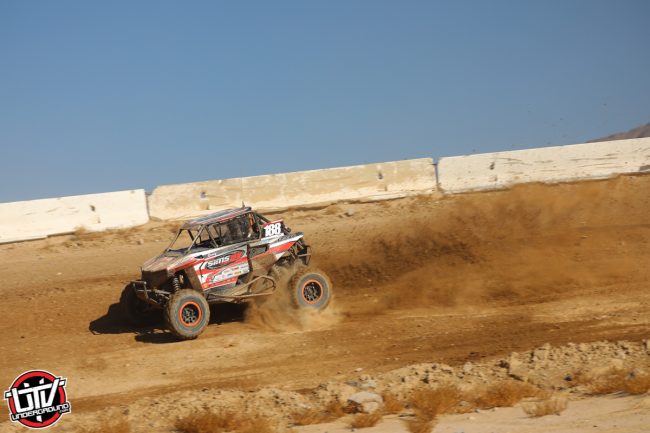 Racing in the SXS Stock 1000 class was all new to me this season. I worked really hard to improve and be completive in the class. I had a season full of ups and downs and a lot of learning. I feel proud of my accomplishment and I am confident that I will be even more competitive next season.