Home All Stories News Catching Up with Corbin Leaverton 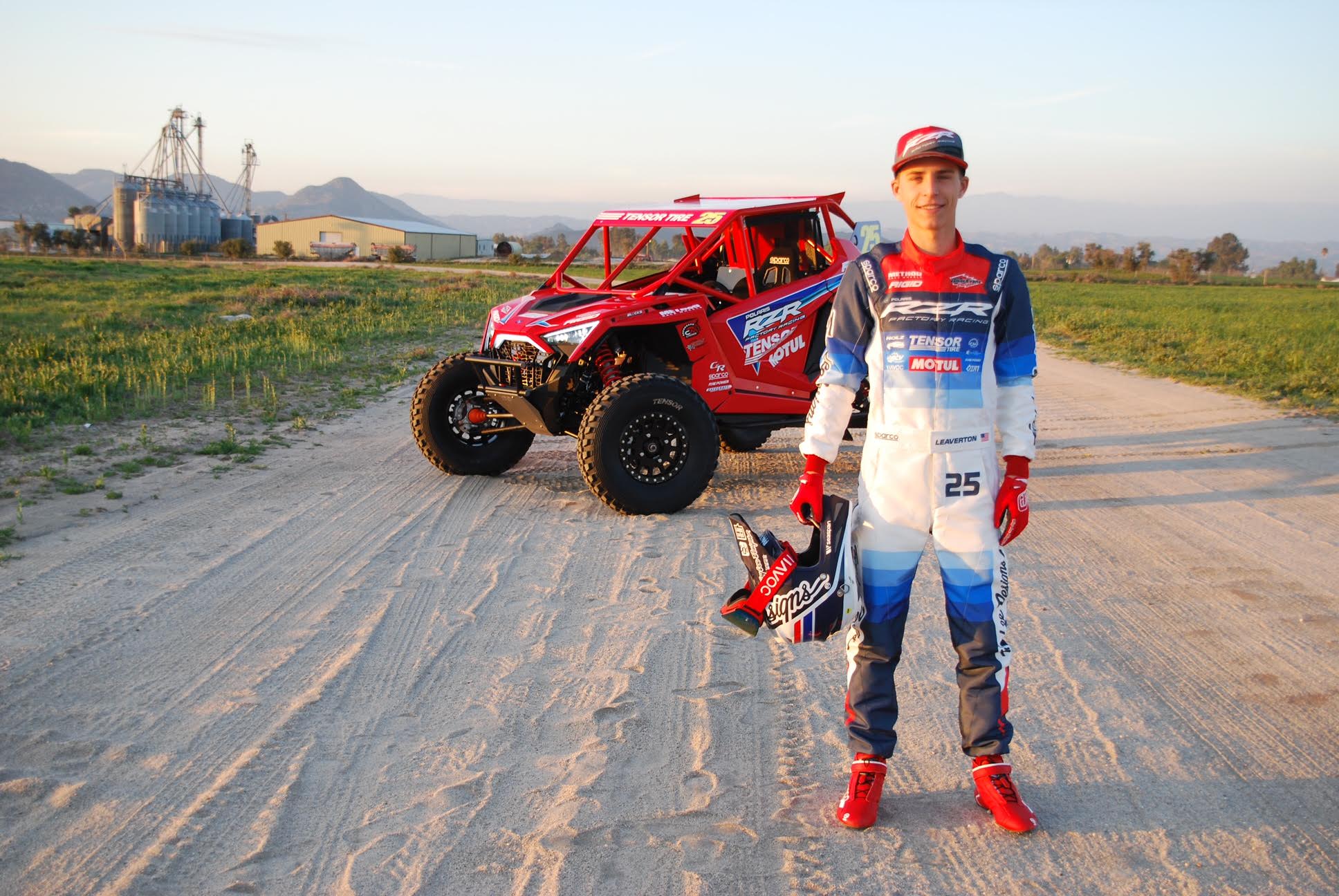 On the Polaris factory racer profile page, Corbin Leaverton is described as a “young, up and coming off-road racer from Southern California with a background in Motocross.” That’s only partially true though. Yes he’s from SO CAL and yes he has a background in Moto – but with a second Pro WORCS Championship now under his belt – (this one in the premier Pro Turbo class), he is no longer “up and coming” he’s ARRIVED. Leaverton and his equally impressive uncle Cody Bradbury put in a ton of miles in 2020 – dabbling in the desert with some BITD races. All on the new 2020 Pro XP platform. While they didn’t have any major podium victories in the desert they pulled plenty on the short course track and most importantly they did what all of us were trying to do this year – survive!

We caught up with Corbin while shooting the all new 2021 RZR Pro XP Ultimate’s at our favorite patch of (private) dirt in Ocotillo right before Thanksgiving. Here’s the thirty-second takeaway if you’re in a hurry: This kid is one of the most talented and professional young men I have had the pleasure to ride shotgun with in my twenty-five years directing and producing. He’s humble. Dedicated. Has a clear vision of where he is and where he wants to be. Understands the value he brings to the table as a racer and brand ambassador. And most importantly he respects the sport. Maybe it’s his blue collar roots, or the influence of his uncle – but Corbin is firmly rooted to the ground – and when you’re ripping around in the dirt at 70+ miles per hour in this day and age that’s precisely where you want to be. Gen Z kids take note – this is solid advice and wisdom from someone who turned a hobby into a job he loves in less than six years.

Josh Martelli: So Corbin how did you get your start in racing?

Corbin Leaverton: I started in a local series called The Dirt Series. It was kinda just a So Cal series running on some of the moto tracks around here. I ran that for a year…my first year there I actually won the championship in the 900 class there. And then we moved on to WORCS after that. I didn’t always race full seasons after that though. I had a few seasons in WORCS where I was kind of on and off. I really didn’t take it very seriously, honestly.

Josh Martelli: Right that’s pretty common I guess. Most people don’t jump into a hobby thinking it will become a career. But when did that change? When did you get “the call”? (laughing)

Corbin Leaverton: In all honesty, it was something I kinda just fell into almost. When I turned 16 and started getting consistently good results I started getting approached by real money sponsors. That year of 2017, I started taking stuff a lot more seriously. I put more time into prepping the cars…and practicing and all that… Man it just kindof took off from there. The next year I landed a parts budget from Polaris to see how I would do… Next thing I knew I was winning a championship in the Pro Stock Class at WORCS in the RS1 – which led to my contract with them. So chalk all that up to a little bit of luck and a lot of hard work – but it’s cool for sure. Now I have two Pro Championships as of last weekend so…it’s crazy it’s been a wild ride for sure!

Josh Martelli: It’s always a trip when a hobby becomes a career all of a sudden right?

Corbin Leaverton: Yeah definitely that’s really what it was for us. For me and Cody (Bradbury) my uncle we’ve kind of always done it together and we ran it as a team deal. And we’d always just done it for fun. And as the industry progressed and we saw how much money was being poured in…sponsor-wise, manufacturing-wise and all that we kind of saw an opportunity. We’re like “Dang this could be something that we could do for a living.” A few years prior it wasn’t even a dream really. It wasn’t even something I thought was possible so….

Josh Martelli: Well I don’t think you’re alone in that experience. The good news is that the UTV platform provided a much needed shot in the arm for the entire off-road industry. That’s opened a lot of doors for guys like you that might not have ever become racers.

Corbin Leaverton: It’s gone up so quick. The amount of competition and money and backing and everything that’s been poured into the side by side industry right now. It’s crazy. It’s something I feel lucky to be in the beginning stages of honestly. It has endless potential, really..

Josh Martelli: So Lucas Oil has ended their series – do you see that creating any opportunities for you guys in the short course scene?

Corbin Leaverton: I do yea. I mean everyone wants to see guys like RJ (Anderson) in a Pro 4 but I think there’s more stability in the side by side scene at the moment, ironically. We have multiple manufacturers putting money into it, backing teams in this sport and I think that makes for a more stable series. Lucas going away, man, that’s people’s livelihood right there for a lot of those guys racing. There’s not much out here on the West Coast now. So they’re really going to be forced to go back East to Champ or drop down into a (UTV) to race over here. But I definitely think there’s opportunity. There’s stuff popping up for sure. Out in Texas. Texplex is one that is definitely an up and coming series. I think you’ll start to see series like that – who focus exclusively on side by sides start to thrive. It’s cool for us to get a showcase…

Josh Martelli: Right like maybe the strength in numbers as a group of UTV racers is large enough to give you guys your own dedicated series?

Corbin Leaverton: Exactly, yeah. Look, the gap from consumer to racer is so much less… When you have a guy racing a Trophy Truck it’s like…impossible. Guys are like “Wow that’s cool but I could never do that.” But you see a guy racing a RZR and it’s like “That’s cool and I can go finance one and do that!” you know? A lot of the top UTV racers now, were once just weekend warriors. And really I’m one of them, so…it’s crazy. I think it builds a fan base that’s insane…because it’s attainable.

Josh Martelli: So one thing that I think is radical – is that next generation of racers coming up right now…these 170/250 kids are gnar!

Corbin Leaverton: It’s insane dude. I was just at that edge when they first came out, I was already like 12 or 13 so I just missed it. So I never really got to race one. It’s insane right now. They’re gnarly. They’re more competitive than us pros. They’re on their simulators all day and at the Go Kart track. They have people helping them with marketing. It’s gnarly. They’re taking it really really serious from a young age. They’ve got some pressure on them for sure. It’s so competitive now, there’s so many kids. I’m excited to see these kids come up the ranks and see how they do.

Josh Martelli: It’s definitely a little intense for these kids. Some of the parents are doing great with it. Others…well it’s like any sport – give the kid a break you know?

Corbin Leaverton: Oh yea I mean it’s cool to see how much is going into these kids programs but you definitely have to remember they are kids. I mean I think it’s cool to see what RedBull has done with guys like Seth and Mitchie – obviously they are a tad bit older you know? But they are out in the Middle East right now getting ready for Dakar and that’s just awesome. I’m super pumped for them and the industry as a whole to see big names and big sponsors coming into the industry and put their faith in these kids and young adults. It’s really really cool to see.

Josh Martelli: What advice would you give these kids coming up Corbin? If you were to sit them down and talk to them about what is coming…

Corbin Leaverton: Dude there is so much…. It’s hard to even pinpoint it to you know…because of how fast the industry changes. When I was there age it was so different. There weren’t many people even making money racing side by sides. I would say “have fun”. I see a lot of these little guys getting pushed really really hard. They have to do it for the love of it FIRST. Or else it’s not gonna last. If they’re not having fun at ten years old, you’re not gonna love it at nineteen. I mean wait till you’re trying to put food on the table. You have to be careful what you do and say… Not having a temper after a bad race. Definitely I would tell these kids “enjoy it”. Enjoy it and have fun while you’re a kid because if you do it could turn into something. The opportunities are endless right now. I’m close with some of these kids and now they’re getting into bigger cars… it’s just exciting. It’s an exciting time to be racing.

Josh Martelli: Yeah I mean you look at kids like Dallas Gonzalez, Paxton, Sims, I think it’s really cool. And some of them are doing a better job at 9-10 years old than some of the pros…

Corbin Leaverton: Dude sometimes those kids push us Pro’s to be better at it! The sponsors love it. There’s a fine line with that stuff too though. It can take away from their racing and their skills too. There’s a balance. I’ve learned as I run my own program that you have to balance the marketing with the progression of your skills. Little things like how you speak on the podium and how you look. That’s super important. You have to really look at the big picture. The sponsors want humble, respectful, clean cut drivers. Man racing and life really go hand in hand. Racing for a living IS your life. You have to have a balance for sure.

Josh Martelli: Well Corbin it was great chatting with a bit. Thanks for coming out to help us test this new RZR Pro XP. We’ll be looking forward to seeing you compete next year! Where can people check you out?

Corbin Leaverton: Right on – yeah thanks for having me. I’m @corbinleaverton on Instagram, so feel free to reach out and say hi – we’re always looking for great partners for our race program!