Home All Stories News CFMOTO Factory Racing Team got an opportunity to test its newly developed... 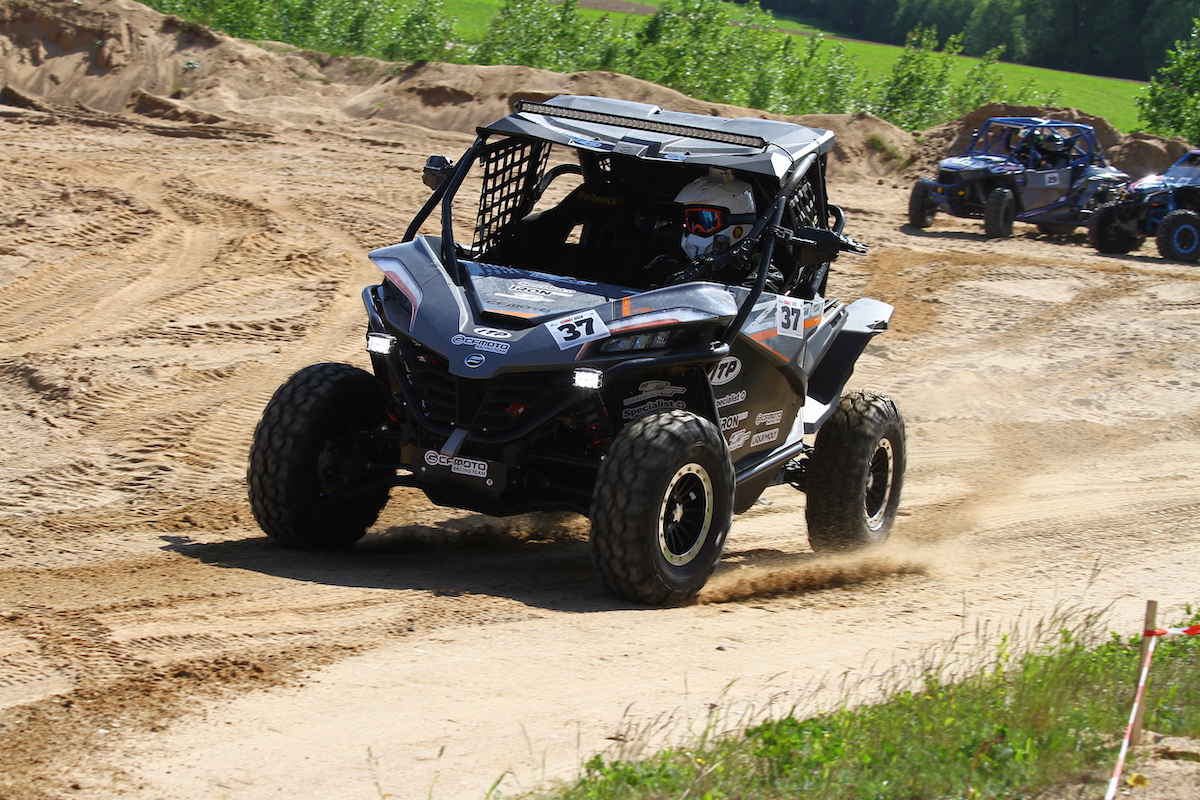 The team’s primary event plan of this year’s season was affected by unforeseen quarantine and although the registration to this contest had not been planned initially, it just happened, quickly and unexpectedly.

“This year’s even calendar has been changing every week. Postponed events now have new dates and overlap with other events that had already been planned, therefore it is difficult to project where and when we are going to go. The initial plan now is to participate in as many events as possible, taking the circumstances into account, of course; that includes marathons and such events as AMP Sand Box. It is very important to continue testing the machinery and its reliability.

We did not sit still during quarantine – we managed to upgrade the SSV, increase its power, improve its chassis and brakes; the work was done by a legendary Dakar engineer Darius Biesevicius. Although we still need to improve a lot to catch up with the turbo Can-Am – the technology there is next level –  today we are stronger than ever before”, said Antanas Kanopkinas.

The training was interrupted by the broken belt

The contest in a “sandbox” started with training, which was going differently for each member of the team.

After doing a few laps on ATV track, Adomas Gancierius decided to come back to participants’ park stating that the situation was clear – it seemed to him that keeping the strength and vehicle for the finals is a better option.

Antanas, on the other hand, had to stop in the middle of the track yet not of his own will. After more than half of the training was complete, his SSV variator belt broke. However, the racer managed to see a positive side of the situation – the belt broke during the training, not during the finals; and it showed him how durable the belt could be when driving on a sand.

“Theoretically, the belt should be changed before every contest. My aim was to find out the capability of it on a sand track. Before that, it was used only on sand tracks during the trainings; therefore, now I know clearly that in a racing mode, it only lasts for 300-350 km. Thinking about Dakar, the belt there would need to be changed twice a day” – said Antanas.

On a podium among other winners

Although Antanas’ SSV ZFORCE 1000 Sport was officially considered the weakest of all contestants’ vehicles, the racer still managed to achieve the winning position. After summing up the results of both rides, he was pronounced the winner of the 3rd place of Side by Side course, and proudly stepped on the podium.

“I was able to reach 100 km/h in 7.5 seconds while Can-Am does so in 3 seconds, so there is nothing more to say about the start. The competitors tore away from it very fast and I was just going behind them. Later, I made a mistake and Polaris overtook me.

Everyone had their own contest competing with themselves and with their technique, which was slowly breaking and falling apart. The first to exit was Can-Am, then Polaris followed by another Can-Am – this shows that in such type of contest the most important thing is not the speed but reliability. Of course, we are currently lacking speed on a sand, yet we work hard on reliability and that we have already highly improved. There is no doubt that competing with turbo motors is tough yet we can be competent in other field, which is reliability”, Antanas added.

A lack of luck and a couple of places distanced the team’s ATV driver Adomas from the winners’ podium. The start did not go well for him in the finals; therefore, he left the start from the very back of the line.

After crossing the finish line, Adomas stated that such scenario complicated the whole ride for him, as there is not a lot of space for overtaking in the AMP Sand Box track if you don’t manage to start well. Staying behind the competitor and having to collect the sand after him turned into his ATV engine’s cooling problems, which was the reason for him having to slow down.

In general, I liked the format of the contest – sand, many ascents and descents, and although the speed is not high, there are interesting turns, where good manoeuvring is required. About half an hour into the finals, because of the bad start and then trying to catch up with competitors, my engine started overheating. The radiator was covered by sand, which caused the limiter to turn on frequently. In order to avoid bigger issues, I had to drive a lap slowly and in a calm manner for the engine to cool down so I could start racing again. This is what I was doing repeatedly the whole time.

There are a few damages after the ‘fight’ – I lost my rearklight and back box cover, so I will need to go dig it out of the sand. I have also noticed that such track requires different setup of shock absorbers because current settings were throwing the vehicle around the track. Honestly, it was very demanding; I can’t feel my arms or legs but after all, I did enjoy it.

This was a perfect exercise for us to get to know how to prepare for this type of tracks next time. There were 15 ATVs in my class yet I managed to overtake the majority of them. Actually, some of them didn’t want to let me pass by, so I had no choice but to push them slightly from the back. Overall, overtaking is not easy in this track – you can do that by driving up the dune but in this case, there is a risk of sliding down. It was a challenging yet interesting contest, which provided us with a very valuable experience”, said Adomas.

Another member of CFMOTO Factory Racing Team, Dalius Mockapetris, took the role of the team’s strategist in this race and helped the members to prepare for the starts. This time he decided not to go behind the wheel of his older generation ZFORCE 1000 SSV.

Story and photos courtesy of CFMotoRacingTeam.com