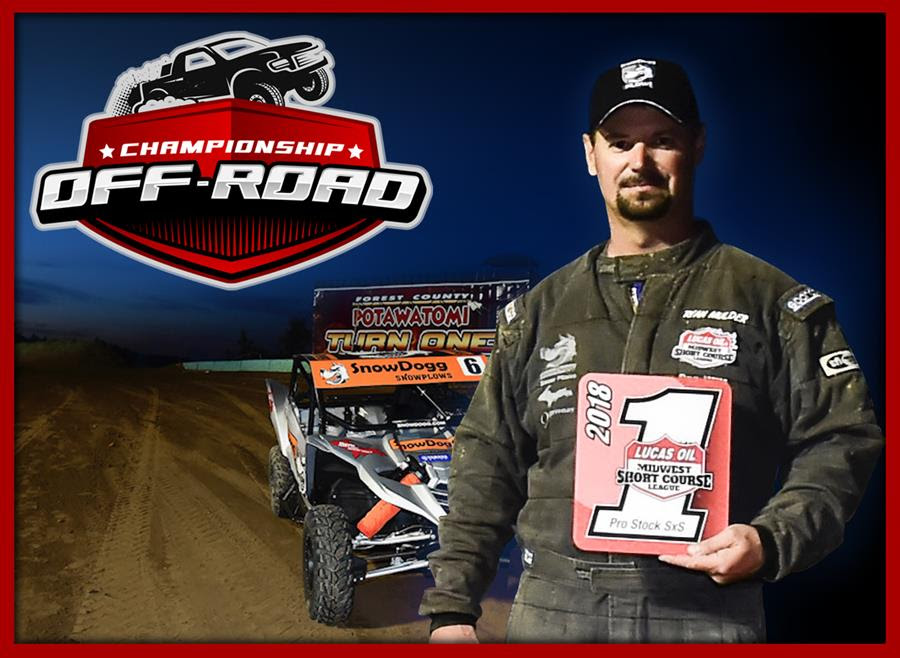 Albertville, Minn. ~ With the inaugural season of Championship Off -Road being new to the motorsports community as a whole, and the events quickly approaching, it is with great privilege from the International Series of Champions (ISOC) to appoint Ryan Mulder as the head tech director for the rapidly growing Side-by-Side classes. With the recent appointing of Bill Savage as the lead Championship Off Road tech director, Frank DeAngelo as the Series Director, and now Ryan Mulder leading technical inspections of SxS classes, ISOC is very pleased with this highly sought after team entering its first season of short course racing.

Growing up in the Upper Peninsula of Michigan, and attending MMI (Motorcycle Mechanics Institute), Mulder has surrounded himself with many different branches of racing for the previous 30 years. Mulder began his career within the industry working as a service manager for 10 years at a Honda Powersports dealership. During this time, the Michigan native was competing in short course racing, where he compiled two class championships in a Pro Buggy. Widely regarded and respected as a hard worker and influential thinker, Mulder began racing his own SxS’s in 2017. This is where the following year, he was crowned champion in the Pro Stock SxS class. Mulder is well known for his passion towards the sport of Off-Road and hands-on approach to Off-Road racing. His knowledge of the machines and classes, along with his ability to build long lasting, non biased relationships with the racers and teams, will be a large benefit to the sport and Championship Off-Road.

“Off-Road racing not only needs top-tier management, but also a good technical team leading the way, to keep the racers not only competitive but safe.” said ISOC President, Carl Schubitzke. “His knowledge and past experience within the sport, especially in the Midwest, is significant and we look forward to working with him to keep growing the SxS classes of Championship Off-Road. He will make an immediate and positive impact for our SxS racers and teams .”

Mulder has a broad history of working alongside racers, sanctioning bodies, and customers in many different forms of powersports and day-to-day life. Also, Ryan has raced and worked with top racer personnel and companies on his journey to being named the Championship Off-Road SxS technical director. Now being semi-retired, Ryan sells SnowDogg snowplows in Upper Michigan. Ryan will bring passion and a load of wisdom to Championship Off-Road as he steps away from getting behind the wheel.

“I am very excited to join the technical team of Championship Off-Road and be a part of the new series,” said Mulder. “I believe this is a great opportunity for both parties, as I am stepping away from the racing side, but still know all the in’s and out’s of our classes and its machines. We share the same goals, as we both want a stabile series for the racers and it be successful for all parties involved for years to come.”

SxS racing has been the largest and fastest growing motorsports segment in recent years. The previous 5 to 10 years has seen substantial growth for not only race numbers but also the sales of side-by-sides for utility and pleasure. Having the correct format and balance of approach will be key to SxS racing, moving forward in the future. That is why we at Championship Off-Road plan to develop and maintain our rules packages to make the racing more affordable, while developing closer relationships with manufacturers and teams. With relationships growing, we can all benefit as a stable racing platform will prosper and develop into a tremendous future for the industry as a whole.

The 2020 Championship Off-Road season will host five weekends of racing this summer, starting June 20-21st in Crandon, Wis. The ten round series will also make stops at ERX Motor Park in Elk River, Minn., Dirt City Motorplex in Lena, Wis., and Bark River International Raceway in Michigan’s Upper Peninsula before ending the season back at the Crandon World Championships on Labor Day weekend.

Welcome @cowboycerrone to the fray! Team BMF is he

Imagine what this could do for your pit.  The de

It’s important to understand if you have raced t

Another ⚠️. This one is about halfway through

Dangers are marked, in the @whoisjob Baja Surfari

Yep! You read that correct! @robbygordon is front

@BFGoodrichTires is proud to announce they will be

Lots of room for racer and spectator parking now!

@RobbyGordon and @SpeedSxS are putting up $5,000 c

No other company has as many desert racing wins an

@phillips.racing racing IS COMING! Over 250 signed

No Events. No Culture. No Sales. Event promoters n

Take care of your vehicle, and it’ll take care o