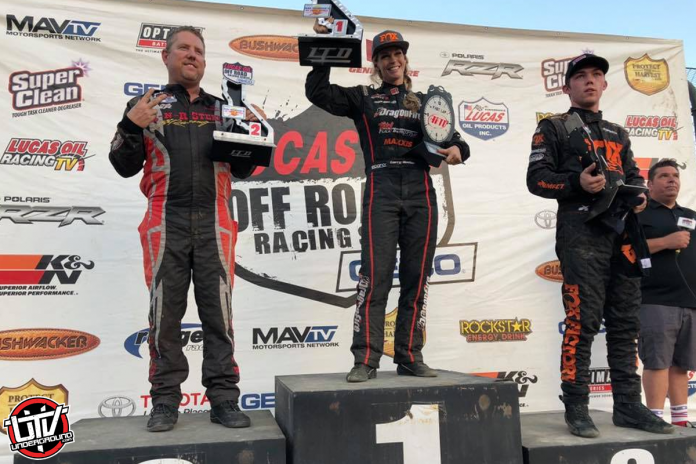 Corry Weller broke a tie for the Turbo UTV points lead with teammate Paul O’Brien as the Lucas Oil Off Road Racing Series season resumed with the Rockstar Energy Golden State Off-Road Nationals at Glen Helen Raceway on Friday and Saturday. Meanwhile, Mickey Thomas would score the only double podium of the weekend in Production 1000 UTV, scoring the Friday victory and adding a third place finish on Saturday when Myles Cheek took his third victory in the past four races.

Weller swept the weekend for her fourth and fifth Turbo UTV race victories of the 2018 season, giving herself a solid lead over O’Brien going into next month’s season finale at Wild Horse Pass Motorsports Park. She started the event off by qualifying first on Friday to O’Brien’s fourth, but O’Brien would start first due to an inversion of the grid.

O’Brien settled into the lead on the first lap, but by lap two Weller would catch him. Unfortunately, she would find herself on two wheels coming out of the final corner on the second lap, running into O’Brien’s left front and sending him into the wall. While she would get back on all fours and continue driving, having to hold off a hard-charging Eliott Watson for the victory, damage to O’Brien’s vehicle would render his day done. Watson held onto second, just over six seconds behind Weller, while Robert Van Beekum finished third as six UTVs finished on the lead lap. 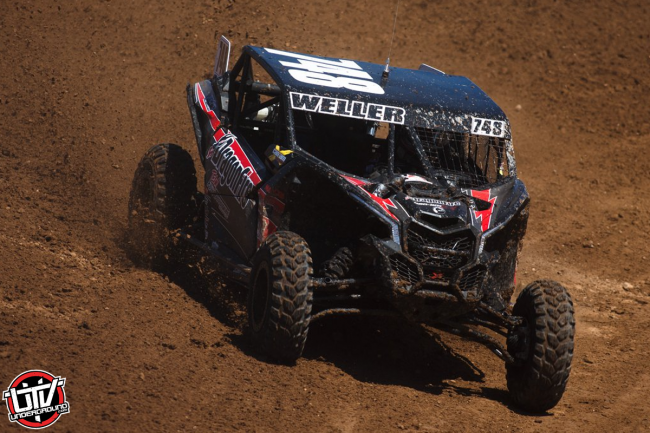 “I’m so rattled right now—I don’t even feel like I should be up here,” a visibly upset Weller admitted on the podium after Friday’s victory. “Paul and I have been running together all season in points, and I saw this going all the way to the end. I sure didn’t see me taking out my teammate on the first lap, so I don’t even know what to say.

“It was fun (racing) with Eliott, but that was a horrible way to win a race. I’ll talk to (Paul) tonight—they’re good friends, and I don’t race like that, so this is weird.”

O’Brien started from the top spot once again, this time without a qualifying inversion, and again took an early lead. But trouble for multiple drivers would bring out a pair of cautions to bunch up the field. Despite O’Brien cleverly bunching up the field behind him before launching on the restarts, Weller wouldn’t need more than two laps to get around him as O’Brien struggled with a flat left rear tire.

Saturday’s podium had the same names on it, but with two of the spots flipped, as Van Beekum would beat Watson to the line. O’Brien managed to not only hang onto fourth, but also make it a true battle for the podium, crossing the line within a second of Van Beekum. 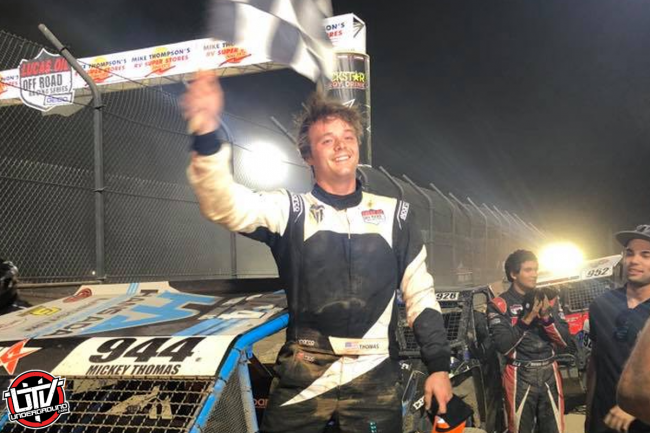 Friday’s Production 1000 UTV race was exceptionally close. Each of the top 10 drivers within 10 seconds of one another at the checkered flag, and Thomas only beat Nathan Barry by 0.427 seconds to claim his first victory of the season, with Ronnie Anderson third. The race initially appeared to be down to another battle between Cheek and points leader Brock Heger, but Heger would pull off early with a left rear coilover issue and Cheek fell to fourth with a right rear tire problem.

“It was definitely a fun time out there today, battling with Nathan and all the other guys,” Thomas said. “It was a fun race—our car ran great, and we ended up in the right place at the right time a couple of times, so we ended up here.”

But if Friday ended in disappointment, Saturday was a return to form for both Cheek and Heger, who would finish 1-2 for just the third time in 2018, and the second time in those instances that Cheek beat Heger to the line. Thomas would complete the podium, the only Production driver to earn dual podiums during the weekend. 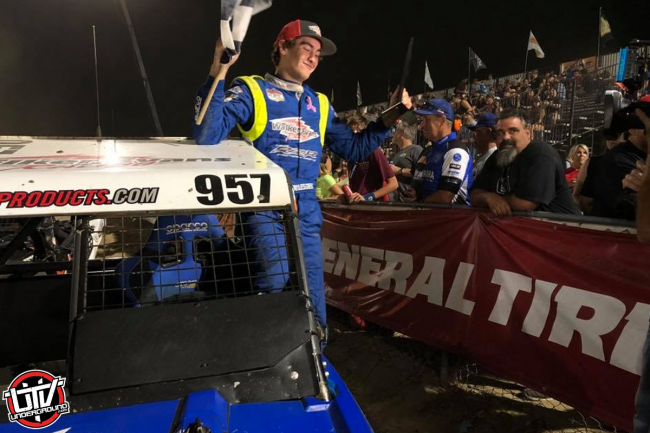 Glen Helen proved to dramatically affect both championship chases. Heger’s Production points lead over Cheek would be cut in half thanks to his Friday DNF, while Weller expanded her advantage to over 20 points over O’Brien. Both championship leaders appear to be well on their way to locking up their respective titles, with DNFs against massive entry lists at Wild Horse Pass next month the only likely scenario that would give Cheek or O’Brien the respective class titles.

Next month’s LOORRS season finale at will stream on Saturday, October 20 and Sunday, October 21 on Lucas Oil Racing TV. Leighton won the debut Turbo UTV race from the Arizona facility in April, while Cheek was the season-opening Production round winner.