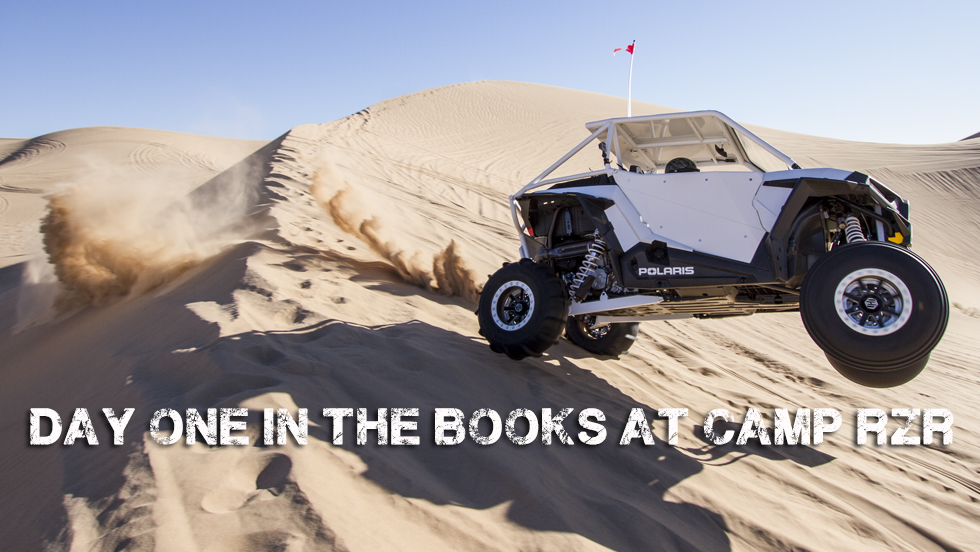 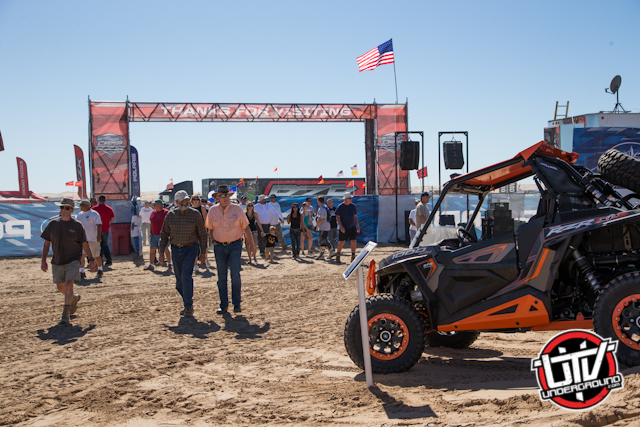 Day one of Polaris’ Camp RZR is now in the books and if one thing is evident after the day of activities, they brought their A game.  Polaris about doubled their footprint in the sand this year just off Glamis Beach Store.  They brought their full force of support in order to say “thank you” to all RZR owners who have helped RZR become what it is today.  After much anticipation and hype, the wait was over at noon when the early arrivals greeted security that guarded the insides of the camp.

Polaris’ goal from noon on was to create an experience for the entire Glamis community to enjoy.  Not only did they dish up free food and water throughout the day, but they had a full staff of Polaris engineers that serviced Polaris riders machines all day long.  Four Polaris dealers were on site selling parts, apparel and accessories for your RZR.  Giveaways were flowing and UTVUnderground.com videos were airing all day on the massive screen Polaris brought out purely for entertainment. 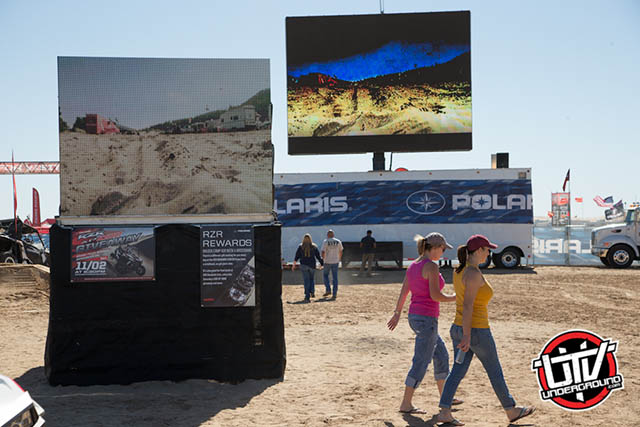 Back by popular demand, the massive screen brought to the dunes will air movies for the family to enjoy the next two nights.  Today, it was a non-stop barrage of thrashing Polaris videos sure to get riders in the mood for a nice long stroll through the dunes.  Friday night RZR Theater will air The Goonies and followed by another showing of a movie voted on by their Facebook fans.  People will be able to ride up to RZR Theater and watch the films from the comfort of their on RZR. 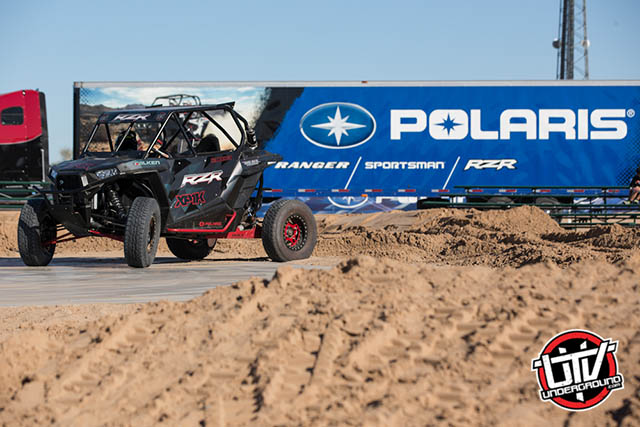 Just as it started to get quiet in camp, RJ Anderson woke the crowd up around 3pm when he took his Polaris RZR XP1K car for a spin through Camp RZR.  After warming up his Kroyer built engine on a few hot laps, he threw down on slab of pavement reserved specially for his tire marks.  After a series of drifts and donuts, not quite as exquisite as his moves in XP1K, a new sense of energy ignited Camp RZR and it was time for a ride. 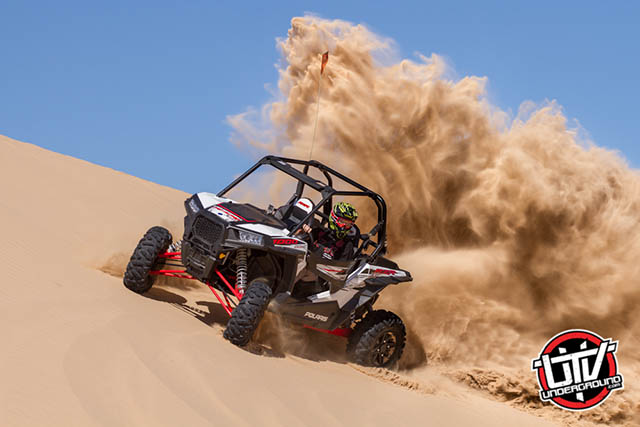 Of course, we had to step out for a couple hours to get some riding in.  We took our new RZR XP 1000 out for its inaugural run at Glamis and hit spots like Oldsmobile, Osbourne Lookout and Comp Hill.  The machine is truly amazing and fully capable of handling everything it came across in todays ride. 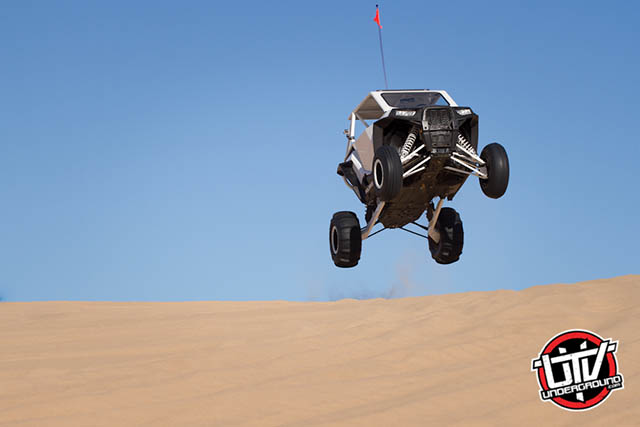 Saturday’s ride, however, is the one that counts, as one hundred+ strong will bomb the dunes in the massive UTVUnderground.com group ride.  The Camp RZR helicopter will be chasing us throughout the dunes and we’ll end up back in Camp RZR for the 5:30pm announcement of the winners of the Show&Shine winners.  This years contest will be bigger and better.  Prizes for Best of Show, Best Paint/Graphics, Best Electronics and Craziest Build will be awarded. 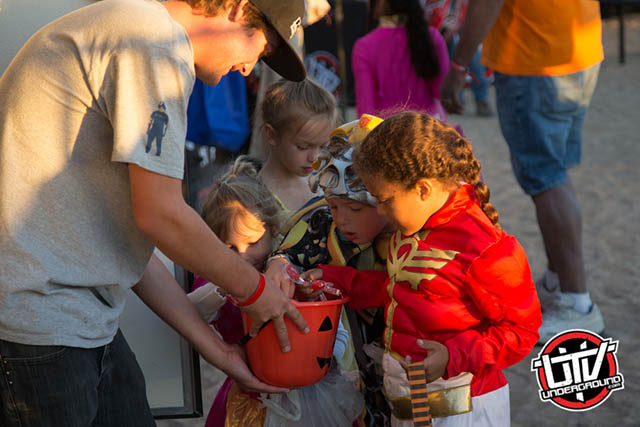 As day turned to night, Polaris wound down their activities with a Halloween costume contest.  Kids and adults alike came to show off their costumes, trick or treat around all the partners in Camp RZR and collect free gifts and prizes.  It was a fun scene and when it was all said and done, the gates to Camp RZR closed at 7pm.

Camp RZR will be back tomorrow with a full schedule of events, so check below to see what’s going on.  If you missed out today, Camp RZR will definitely be the spot to be, as it was today. 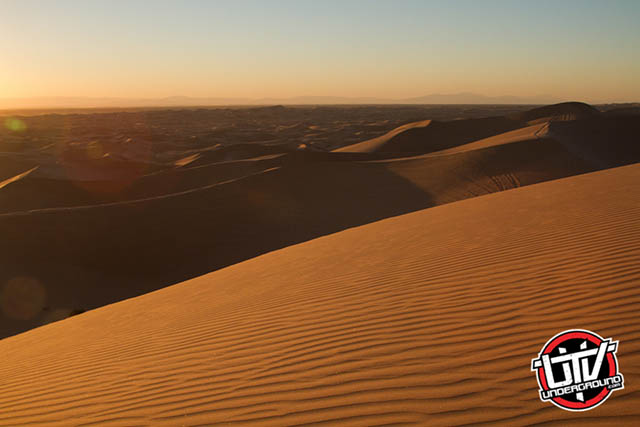