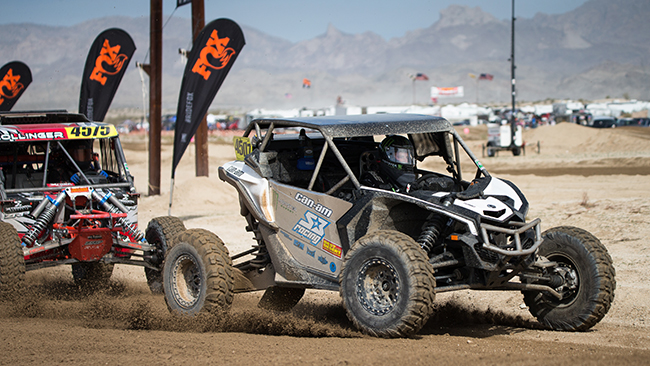 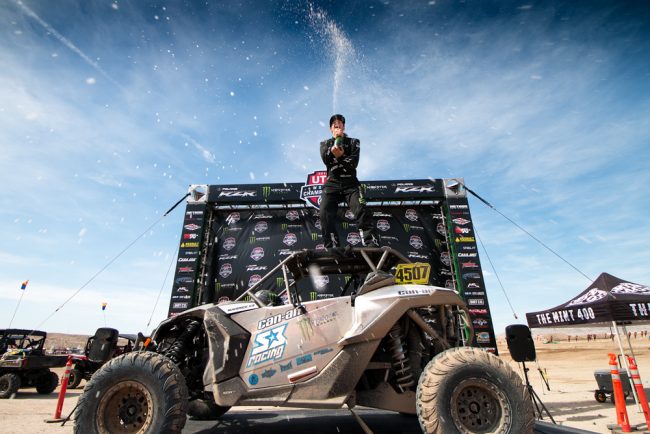 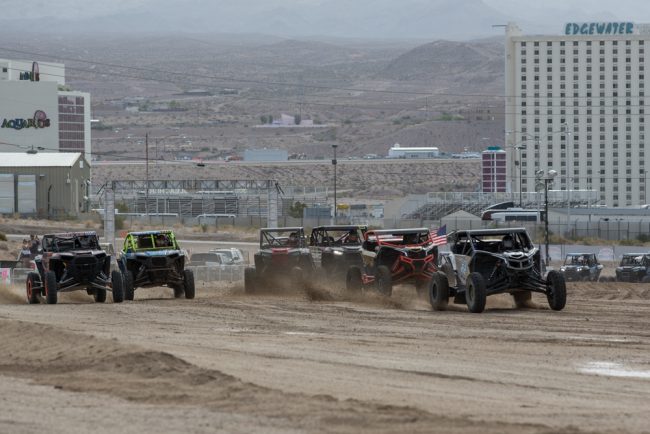 Short course was a bit of a misnomer as it was run on the regular desert racing circuit, but scheduled just three laps. Another record turnout of racers and fans enjoyed beautiful weather during the Saturday morning race with temperatures in the high 90s. 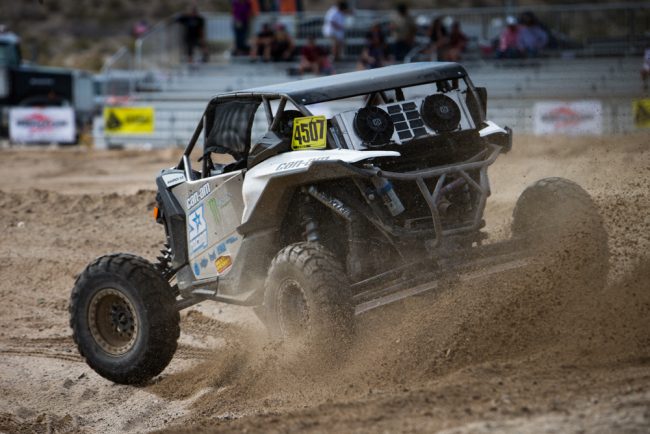 Jones, who made the trip from Louisiana to compete in the event, made quick work during the land rush, dead engine start. Despite running what he termed his “parts car” in the race, Jones took the lead going into the desert at the start and he dominated from there. Getting in front early was key, as the rough course quickly claimed several cars that fell out with mechanical problems. Branden Sims was second in his Polaris RZR, ahead of Jones’ S3 Powersports teammate Logan Brezina. 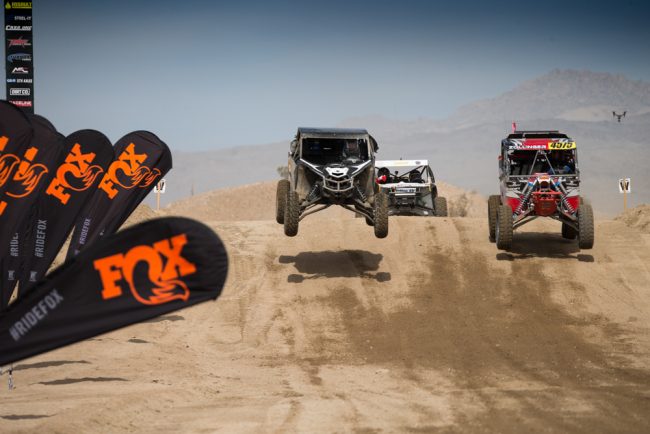 “We got the car fired up, got into the desert first, and tried to run a pace that conserved the car but kept us up front,” said Jones. “We got into traffic pretty quickly, but the wind was blowing, the conditions were good, the track was rough, and the car was running hot. The track was rough; it was the roughest I’ve ever seen it. The infield was fun, but the backside Fox Proving Grounds were torn up. There were cars scattered everywhere and a ton of carnage. A fast conservation is what we had figured out to get to the finish first.”

Crazy weekend for @s3racing Turned right around and put our @canam Maverick X3 desert car on the podium at the @utvworldchampionship ! @monsterenergy

As part of his winnings, Jones won one of five Polaris RZRs presented to the winners by Polaris Industries. Though he races a Can-Am, Jones was happy to see how much Polaris has stepped up to support the sport of UTV racing.

“It’s so nice to have all of the major manufacturers out here supporting us,” said Jones. “This is what we love and what we choose to do, so Polaris, Can-Am, or Yamaha, it doesn’t matter to me. I’m just happy people are out here racing and I’m so thankful to have an opportunity to win a car.”

Sims started on the second row and was off to a quick start. So quickly, in fact, that he nearly tipped over going into the first turn. That bobble let Brezina pass him. Sims was quickly back on the gas, caught Brezina at mile five on the first lap and held second from there. The podium marked his fourth in the UTV World Championship in just four years of the event’s history. Interestingly, he drove the same car in which he finished second in the King of the Hammers.

“I had to chase him down, but I really had no idea where I was on the track so I drove it as hard as I could to finish,” said Sims. “The car was the same one I finished second in the King of the Hammers and I changed nothing on it. It has the same skid plates and the same tires and wheels. I just took out the passenger seat and raced it.” 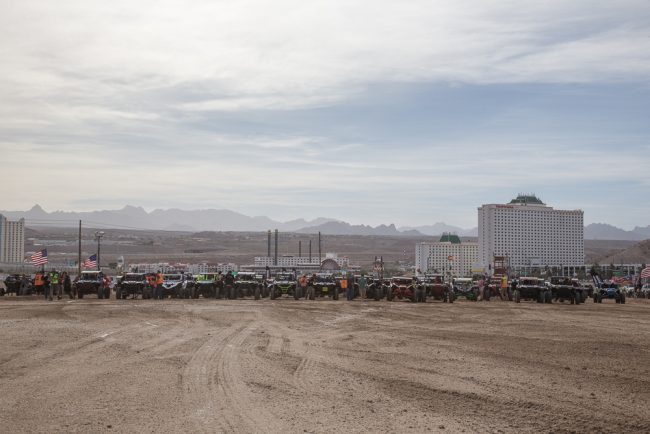 Brezina fought his way through the rough course. After losing second to Sims, he settled into third and carried that position to the finish.

“The course is always brutal, but I found good lines and pushed all the way through the race,” said Brezina. “We carried it on from the second row. Branden Sims pushed by me at mile five and I just tucked in behind him from there.”

In Production 1000, Anderson pulled off the victory in her Polaris RZR. Anderson has been flirting with victory all season in her first year as a Polaris factory driver. Despite driving what was essentially a stock car from a 22nd starting position, Anderson made the most of it, avoiding the widespread carnage and winning. Randy Nix finished second, followed by James Hill on the all-RZR podium.

“I knew we were going up against built cars so I wasn’t exactly sure how I was going to do,” said Anderson. “I just started picking them off one by one, found my lines and my Walker Evans Shocks were just perfect. Since I got picked up by Polaris, we’ve been trying to dial in the new RZR, so this is definitely the turning point for the season and I’m really excited for the next WORCS race.” 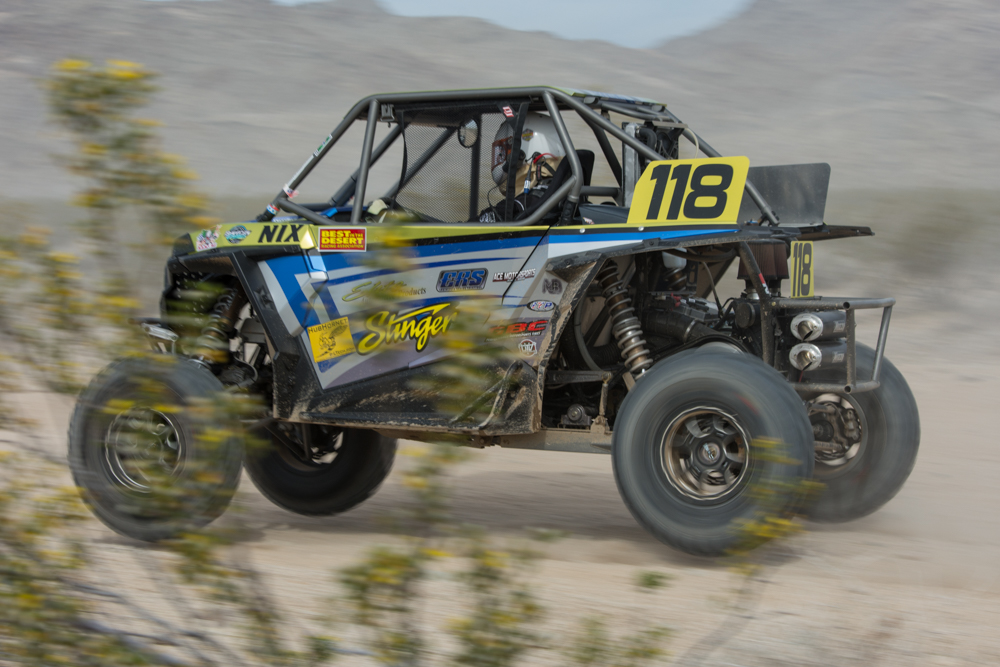 Nix was making his first start in the UTV World Championship. His RZR ran so perfectly, he was ready to turn some more laps. “These Fox Shocks were killing it through the Proving Grounds,” said Nix. “Everything is solid; I’m ready to do it again! I had some momentum from WORCS coming into this race and I’m really happy with the results.”

Hill recorded his first ever finish in the UTV World Championship. Though he hasn’t been running a full UTV racing schedule with any series this year, he wanted to make sure this race was on his calendar.

“We jumped over to rally last year and have been picking up UTV races here and there, but this is the UTV World Championship and we wanted to represent IMG Motorsports and do it for the fun,” said Hill. “I started in the second row and made it through some carnage. There was a lot of dust out there and the course was rough. I made some passes, didn’t get passed, and just tried to stay in front.”

The short course was race was only part of the weekend that also included a nine-lap desert race. Many of the competitors hopped out of their short course cars and got into their desert cars immediately following the checkered flag.

The next race for the Best in the Desert Series is the Silver State 300. That race is scheduled for May 3-6 in Alamo, NV.