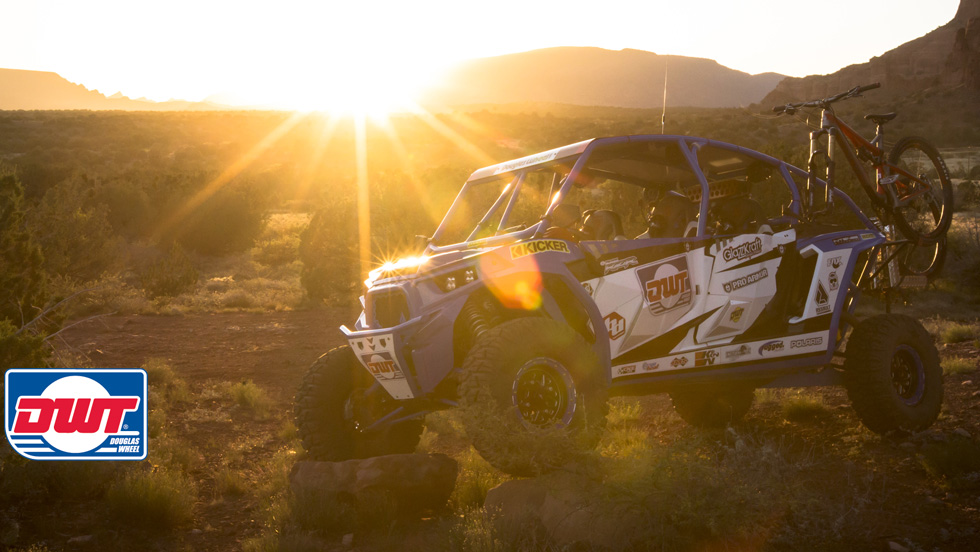 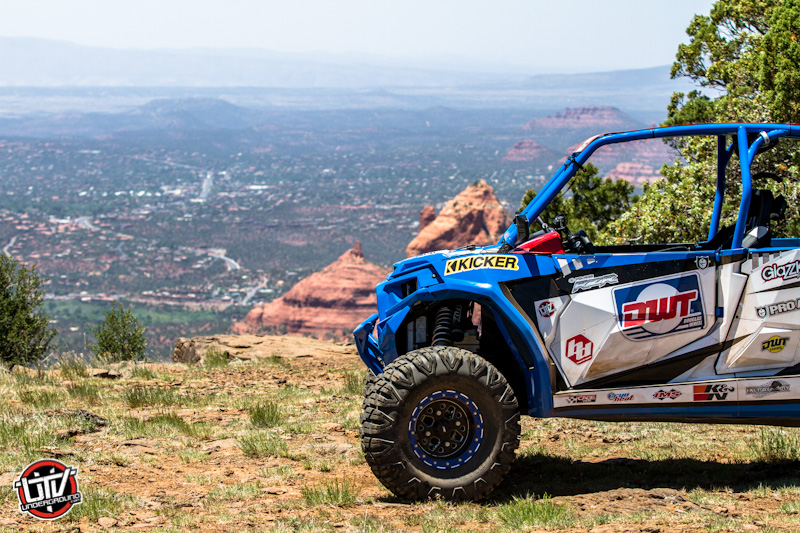 The birth of the UTV industry as we know it came when early enthusiast’s imaginations led them to take humble farm utility vehicles and modify them to be used as sport vehicles. From engine mods to suspension upgrades there was no limit to the modifications made to those early machines. From the start, UTV’s have been a platform for innovative minds to create the machine of their dreams.

In the 1950’s when Polaris invented the first snowmobile the company captured the imagination of the people, and they did it again with the release of the ever-popular RZR line of side by sides. A company’s vision can only go so far when it comes to their products, however. After that it’s the mind of the enthusiast that will ultimately determine how that product is used and how far one can go in the pursuit of their ultimate machine. The vision of that ultimate machine will vary from one person to the next and the creation of those unique visions is a common theme that keeps us all coming back for more.

For Wes Miller, of DWT Racing, that vision took a slightly different twist from the normal “cage and wheels” build. Earlier this year when Wes took over as Marketing Director for DWT he had the idea to build a vehicle to bridge the gap between two sports that often find themselves sharing the same campgrounds all over the southwest. UTV’s and downhill mountain biking may seem like odd bedfellows, but with a little imagination they could compliment each other like peanut butter and jelly. As the mastermind and producer behind the popular “Huevos” series of ATV films, Miller is familiar with out of the box thought and after building the “Bomb Squad”, a team of freestyle quad riders, he has a keen eye for the desires of action sports athletes.

The idea of creating a vehicle designed to put the amazing off-road capabilities of the Polaris RZR XPIK4 Turbo together with the fun of downhill mountain biking was born of innovation. Since DWT Racing has a heritage of winning championships it was clear that this build had to be more that just a RZR with a bike rack mounted on the roof. What Wes and DWT wanted was a purpose-built machine capable of hauling a crew of riders quickly to the top of the mountain in style and with performance and comfort in mind. With those goals at the top of the list the Downhill Assault Vehicle (DAV) was conceived.

Once the build was complete Wes invited UTVUnderground.com out to Sedona, AZ to experience his vision first hand. Of course we gladly accepted the chance to check out this amazing ride and explore some Arizona slick rock in Sedona!
We arrived on a spring Saturday and the town was bustling with tourists, mountain bikers, jeep tours, and of course a healthy number of UTV’s charging all over town. We met Wes at a local grocery store where he was stocking up with provisions for a great day of riding. Once greetings were out of the way we walked over to the trailer where the DAV sat poised, ready for adventure.

The first thing that strikes you as you approach the DWT Downhill Assault Vehicle is its clean yet vibrant color scheme. The aggressive Vortex fiberglass body kit by Glazzkraft is beautifully cloaked in blue and white custom paint with red accents thrown in to compliment DWT’s iconic logo. Once a little closer the depth of the build began to take hold. Details abound on this rig. With everything from the obvious wheels and cage right down the small details like the Assault Industries fuel cap jumping at us all at once it was clear it was going to take some time to take in all that had been put into this build. Of course there’s no better way to take in all the details than to experience them on the trail, so off we went to meet up with some of Wes’ friends and find out just what the DAV was all about.

As we rolled up to the trailhead pro mountain bikers and Intense Cycles brand ambassadors, Chris Kovarik and Claire Buchar, greeted us enthusiastically. Intense Cycles was on board with Wes’ concept of this one-off performance trail shuttle from early on and even supplied a $10,000 factory spec Intense Spider 29C for display on the DAV at shows and promos. The fact that Intense had just done a new product launch in Sedona the day before set the stage perfectly to properly shake down the DWT Downhill Assault Vehicle.

As Wes and the riders chatted about the day ahead we got a chance to take a closer look at the incredible build we had heard so much about in the prior months.
We already mentioned that this is much more than a “cage and wheels” build, but lets talk for a second about the cage and wheels. 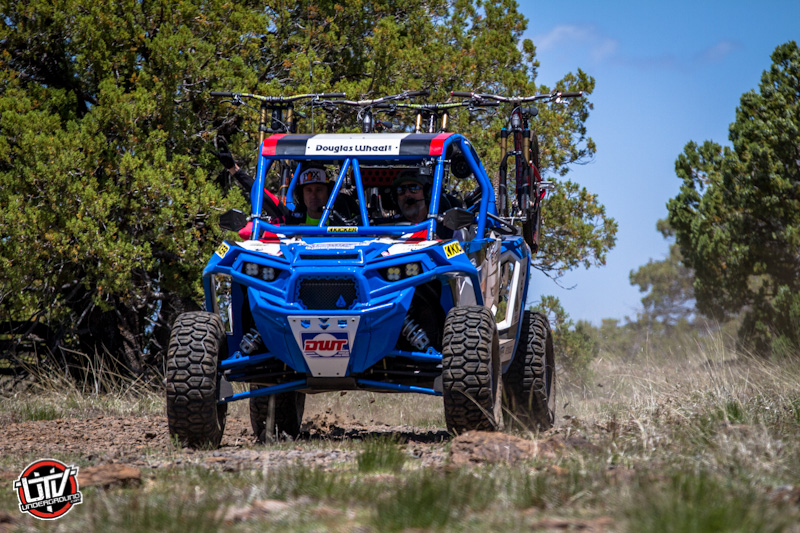 Being that this is a DWT build it’s only natural that the DAV is rolling on a set of DWT Racing Stealth-Lok 14×7 Bead Lock wheels wrapped in DWT Racing Moja-V 30×10-14 8 ply tires. Handling the cage duties is none other than Pro Armor with their Baja Cage with V-intrusion bar for extra protection plus a super trick spare tire carrier with tire and jack mount by CageWrx.

Pro Armor not only did the cage, but also went all out with a huge array of items both inside and out. The list of Pro Armor accessories include, an Asylum aluminum roof, Stealth door skins, aluminum racing front bumper with skid plate, 4 G2 seats, 4 point harnesses all around with sewn in pads, and front and rear door knee pads with storage for items such as phones and wallets.

As long as we are talking about the inside of the car, let’s talk about the Kicker sound system. Kicker brought their PXiBT50.2 stereo amplified controller with Bluetooth to the party. They combined it with 2 40KMMTES enclosure pairs along with 4 PS44 4” coaxial speakers to ensure great tunes on even the roughest trails.

Rugged Radios brings the car’s communications together with their Ultimate Rider RRP660 4 person intercom system. The Rugged system also includes 50-watt car-to-car capabilities for keeping in touch with your friends on group rides.

Looking around the interior and exterior of the car it’s easy to see that Assault Industries helped out big time with this build as nearly every Assault accessory available for the Polaris RZR is installed. With everything from heavy-duty radius rods and tie rods to rear view mirrors, shift knob, and steering wheel, Assault Industries delivered.

The list of trick parts on this build is seemingly endless, but at this point it was time to ride. Wes, along with Chris and Clair, loaded their Intense Cycles Spiders onto the super trick bike mounts that DWT built in house and we headed for the trail. 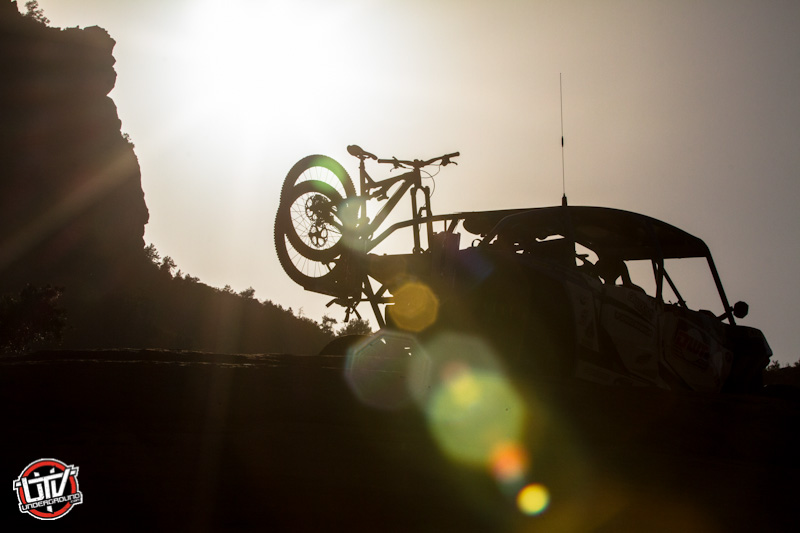 Arizona is notoriously dry and dusty this time of year and our trail to the summit served to remind us of this fact. With ample weekend traffic and dry trails the air was thick with red dust as we worked our way up the mountain. The dust was no worries though as Wes explained that K&N Filters and S&B Filters had jumped on board with filters and a particle separator to ensure that the Polaris drivetrain was always breathing clean fresh air.

The extra long ride to the top of the mountain was also no concern as IMS had stepped up with their RZR XP1000 Auxiliary fuel cell with battery relocation system. This system nearly doubled the range of the DAV.

The top half of the trail was littered with boulders and technical sections that could have wreaked havoc on stock chassis parts, but a Fox stage two spring kit combined with Cryo Heat metal treatment on the CVs and axles, plus a Factory UTV 3/8s skid plate had all bases covered to ensure a failure free ride.

Once we arrived at the summit and dropped Chris and Claire off with their Intense Cycles the race was on. The race where you ask? The race to the bottom of course! While most mountain bike shuttles usually consist of one of the rider’s cars or trucks, the DWT Racing Downhill Assault Vehicle is equipped to serve up just as much (or more) fun as the guys flying down the hill on the bikes. So, who won the race? Well let’s just say that DWT Racing products aren’t built for second place and this day was no exception… 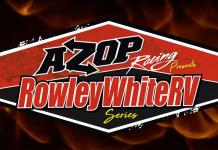