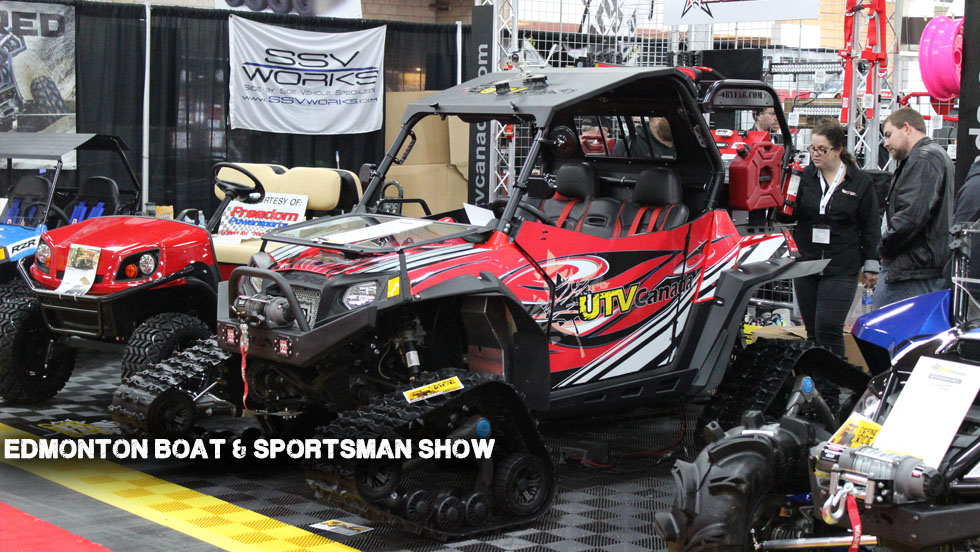 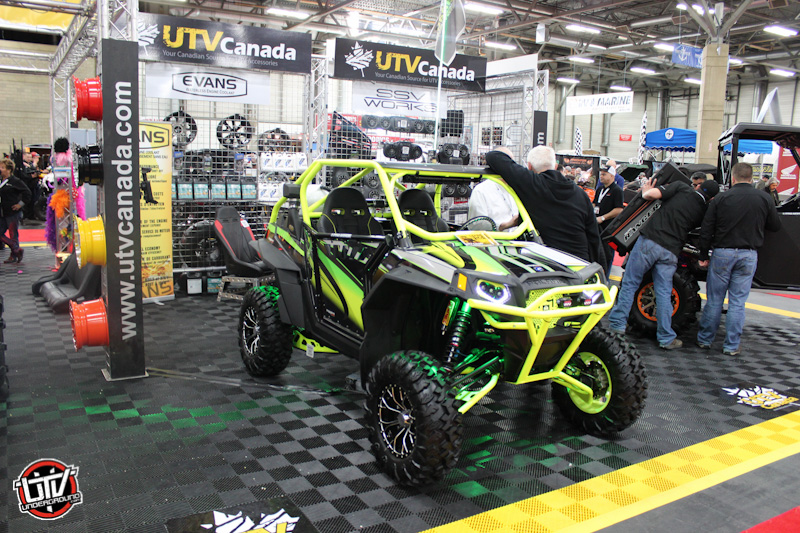 With winter leaving it’s remnants of snow and ice behind, spring is here and in full effect with bright sunshine, warmer weather and a spark in the air that is undeniable. The Edmonton Boat and Sportsman Show takes place every March in Edmonton, Alberta and is the largest show of it’s kind in the Canadian province of Alberta.

The show features a huge array of boats, hunting accessories and our favorite off road rides and UTV’s! UTV Canada stepped up to the plate this year with a massive 2400 square foot boot hosting 12 UTV’s completely decked out, 6 manufacturer exhibits, a dress up photo booth, a massive 16 foot tall trussing system, and an energy that was felt throughout the show. The booth was the talk of the show all weekend and while UTV Canada was proud of it, just knowing that some dealers drove over 12 hours to visit the show and participate in our program, made the feeling last well after the show was complete. 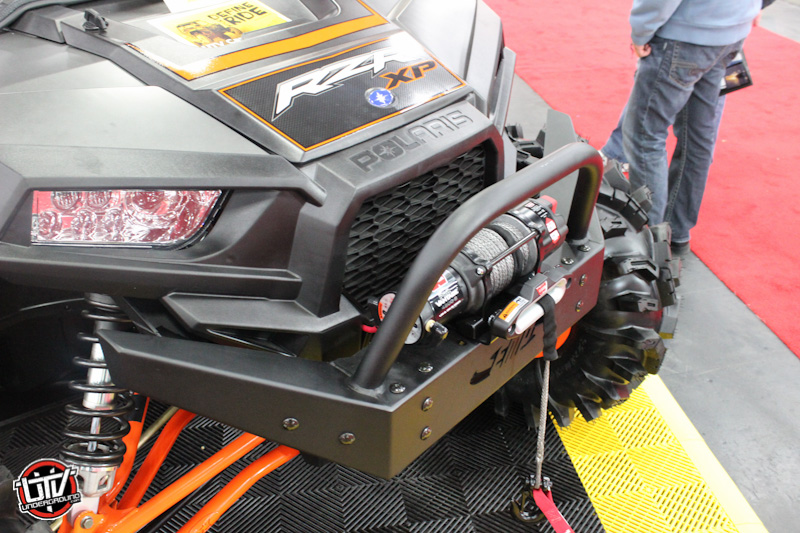 The show started Thursday March 13th and it seemed as soon as those doors were open, spectators were lined up and anxious to see what their favorite hobby had new and in store for them! As the days passed, the show only increased in participants and traffic ultimately leading to an estimated 50,000 people walking through the show and to the UTV Canada booth! Saturday was the busiest day by far with people as far as the eye could see, the amount of attendees seemed to double on that Saturday as well as the exhaustion felt by all of the vendors and show organizers.
The theory & construction of the booth began months ago in planning but the actuality of getting the monster standing on it’s feet is a whole different beast. Laying the flooring and building the overhead truss & grid system consumed all of Tuesday while the installation of TV monitors, wiring, product displays, manufacturer’s displays and the final touches of completion and placement of the custom built units would consume the rest of the week until opening day.

“Having gone into this show with the totally new approach from past years provided me with a few sleepless nights, said Reid Nehring. In the past, we started with a 900 sq. ft. booth, built all the units and manned the booth over the weekend with our own staff of 3. Having grown into a 2400 sq. ft. booth this year, having 5 of our key manufacturer’s in attendance to provide product knowledge and having 7 of our dealers build and provide custom built units proved at times to be somewhat daunting through the planning stages. Regardless, it all came together as a huge success and the planning has already started for next year as all the manufacturers in attendance this year have already committed to being there next year! This is huge for us to get this stamp of approval from our manufacturers and dealers moving forward, and can hardly wait for next year!” says Reid Nehring.
Many spectators commented that the UTV Canada booth was the best looking booth in the show which overcame some of the boat displays that had boats suspended from the ceiling of the convention hall. 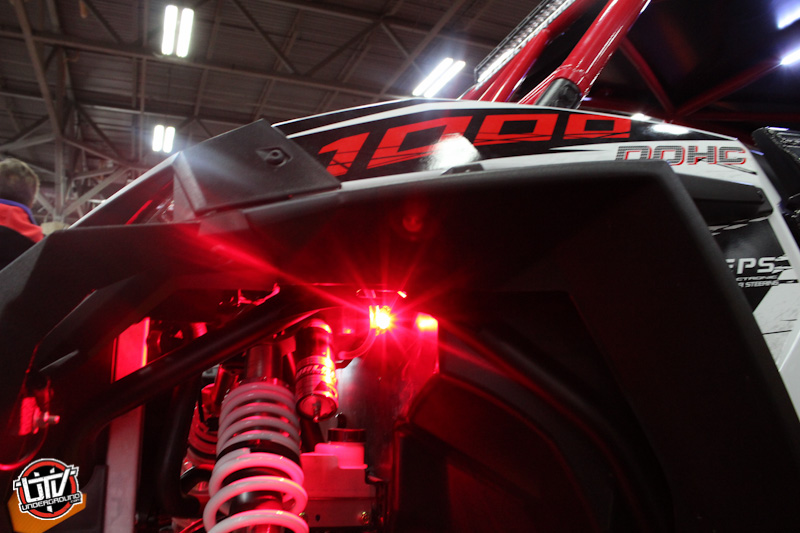  “We wanted to show everyone, most importantly our dealers, exactly what can be accomplished with the super cool & freakin’ awesome accessories on these UTV”s. From the extreme lifts provided by S3 Powersports to the aggressive custom look brought by Pro Armor, Motorsport Alloys, WARN, Desert Works, Twisted Stitch and Wicked Bilt. The units were dressed to kill and were exactly what we all wanted to bring to the table. The response from the dealers was overwhelming and with their support, we are confident to be waving in a new style to the units throughout Canada with accessories and parts that were only seen in magazines, videos, and forums like UTVUnderground.com.” says Andy Ogg.
With the show behind us, the Spring fever has most definitely kicked into high gear throughout Canada with the phones ringing off the hook for new products and accessories to get their UTV out of the garage and out onto the trail!

UTV Canada is beyond appreciative of their manufacturers for supporting the show and having not only their own booth within the UTV Canada compound but to have representatives of the company participate and assist in training and product knowledge for our dealers. Beau Bryant of Colorado Components, MSA Wheels, and EFX tires, Tristen Statler of Wicked Bilt, Fred Brayton of Pro Armor, Greg Orlando of SSV Works, and Christopher Brand of Evans Coolant were crucial to the success of the booth at this years Edmonton Boat and Sportsman Show!
Mario Boriassi from UTV Planet Magazine also attended the show offering great discounts on a subscription as well as handing out free publications all weekend. UTV Planet is one the premier UTV Magazine in Canada and only focuses on the UTV and side by side markets!
In closing, UTV Canada would like to extend an invitation to all Canadians to make this show a stop on their travels next Spring! 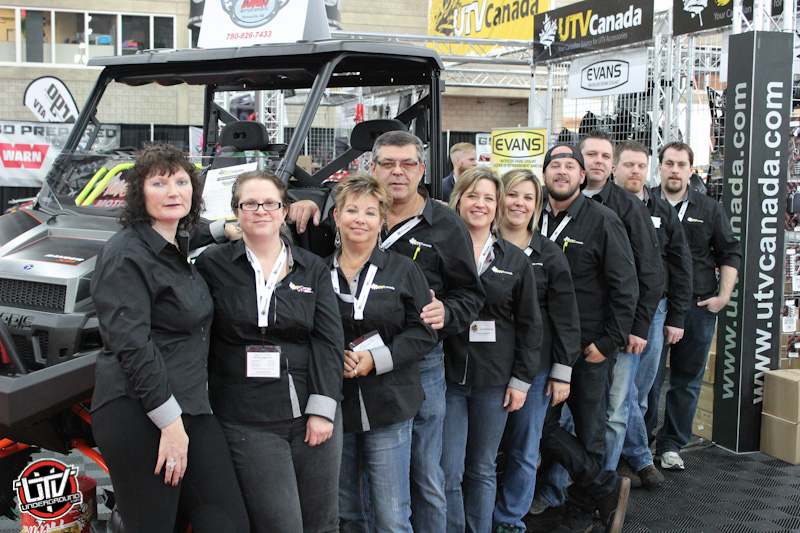 About UTV Canada Inc.
UTV Canada is the leading importer and wholesale distributor of quality parts and accessories catering exclusively to the Canadian off-road and power sports UTV market segment. Starting in 2008, UTV Canada recognized the need for importation of quality products also allowing for the ease of prompt availability. They have quickly established themselves as the premier Canadian source for unique, quality UTV parts and accessories. UTV Canada is committed to providing innovative technology and always guarantees a quality product backed by our leading industry manufacturers. UTV Canada now has two warehouse locations with the Head Office in Leduc, Alberta (suburb of Edmonton, AB) and London, Ontario to better service the needs of their over 700 Dealer network, coast to coast.