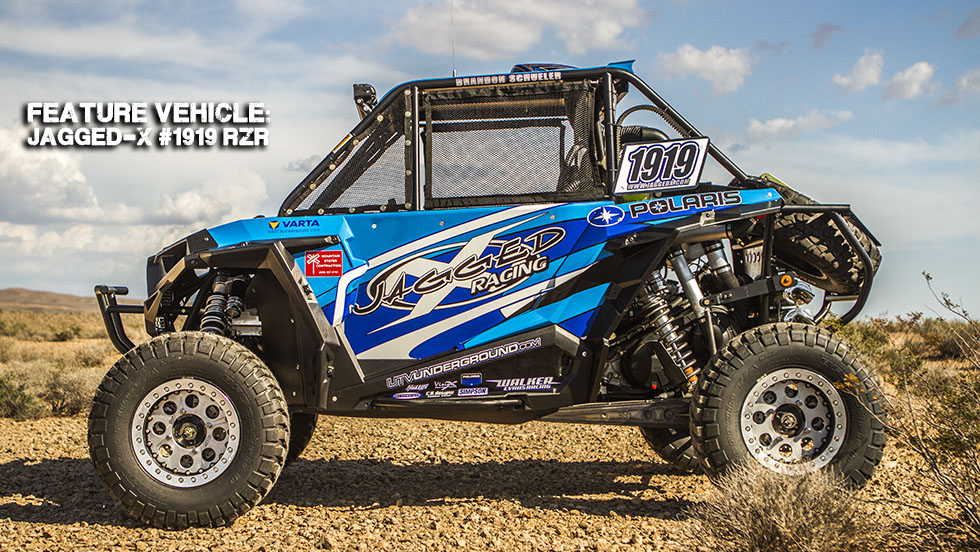 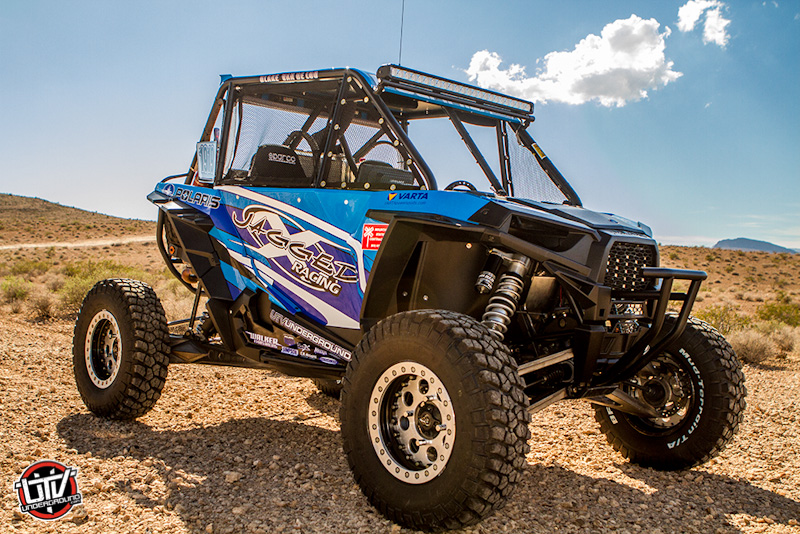 Jagged-X is the long standing premier race team in professional UTV desert racing. From day 1 Brandon & Justin Schueler have developed UTV race machines and have pushed the UTV desert race sport to, dare I say, eXtreme levels! It seems that every year Jagged-X introduces yet another new, fast and highly competitive race machine. Then again, as the flagship factory race team for Polaris they haven’t had much of a choice. Trying to keep up with all of the latest technology coming from the factory is a chore in itself for the Schueler’s. There has been a streak where just as the team completes and dials in a new race machine, their bosses at Polaris drop another new platform for them to start on. Its a vicious cycle for a race team, however NO ONE is giving them any sympathy!

We have been fortunate to have built a solid working and personal relationship with the Schueler’s and the entire Jagged-X race team. Earlier this summer I was even able to compete with Jagged-X in the Baja 500. It was an honor just to be in the race but to be doing it with the sports elite was even better. The quality for which they build their UTVs is equally matched by the professionalism that surrounds the operations of the team. From chase trucks to personnel, Jagged-X is dialed in from top to bottom.

Just over 1 year ago Polaris introduced the new 2014 Polaris RZR XP1000. At the time Brandon and the then current 1919 XP900 were on quite a run, competing for yet another championship at BITD. The 900 after a rough early start was finally dialed however now it was time to build a new 1000. Jagged-X is a 3 part race program. They operate the 1919 and 1931 driven by Polaris RZR GM Craig Scanlon in BITD. They also operate the 1932 Polaris RZR driven by Matt Parks in the SCORE Baja series. Again, as the flagship program for Polaris they are not only expected but are pretty much forced to build the latest and greatest Polaris has to offer into not only competitive race machines, but RACE WINNING machines. Again, they get no sympathy!

Craig Scanlon is not only the GM for Polaris RZR, he is also the driving force behind the development of the RZR since its inception. Craig is RZR and he expects perfection from those whom he surrounds himself with. You would think this adds a tremendous amount of pressure to the Jagged-X team, and it does, but it also brings a level of brand participation that most would dream of. To add, Craig is “one of us”. He is as loyal a team member as one could ever ask for, he has the juice to provide the team with what they need but more than that he is a blast to have as part of the program and for us in this sport, he is an honor to have competing because you better believe everything he and the team learns about the RZR on course is being taken back to MN to be employed into the development of new RZR machines. With that said, it would come as no surprise that Brandon Schueler would build Craig the very first Jagged-X Polaris RZR XP1000 Pro UTV desert race machine. Craig took delivery of the new 1931 at the inaugural 2014 season race in Parker and has had a pretty good run. Of course, as is the case with any desert race machine, there have been some bugs to work out but overall the RZR right out of the box was a performer.

With the new 1931 built and competing and the existing XP900 1919 on a win streak, Brandon was in no hurry to bring out the NEW 1919, and why would he? Instead he was able to sit back and learn about what could be better on the 1931 so that he can apply that to the 1919, at the same time, the 1919 XP900 was still kicking butt so it was perfect for him to take his time and bring out a machine that could compete for a win in its first race, whenever that would be. After winning the Mint 400 in the XP900 1919 Brandon headed to the BITD Silver State race which is known as a flat out drag race. Brandon did not confirm this to me, but I would imagine that it was here that he said ok its time for a 1000. With Coastal, Cognito, his teammate in the 1931 and a few others all showing up with 1000’s it was time for the 1919 to reinvent itself once again and come with an equally matched motor and suspension package. Vegas To Reno would be the race where the NEW 1919 would be introduced!

Vegas To Reno is a marathon. Its the longest race in the BITD series and its one that Schueler has won something like 5 or 6 times. The Jagged-X team seems to dominate this race both logistically and machine wise. Now they would be showing up with a gun to a gun fight, equipped with the 1931 XP1000 for Scanlon and now the NEW 1919 1000 for Schueler. The machines virtually identical with the new 1919 utilizing a newly developed CVT cooling set up. The goal for this new machine was weight, very little of it! Coastal Racing’s Mark Holz has perfected the art of building a light weight UTV. The previous Jagged-X machines were being built on 4-seat chassis which provided an advantage in the suspension realm but hindered it as it pertained to power-to-weight. This year Jagged-X planned to level that playing field and go with a vehicle that favored power-to-weight however still employed all of the quality suspension work they have been known for. What came out was a machine that weighs in well under 2000lbs and still maintains the quickness and nimbleness that a factory 1000 comes with right off the assembly line. In all, the new 1919 and 1931 are two of the most sophisticated UTVs built.

We always enjoy looking at the innovation that comes out of our sport by all of the builders in UTV racing. We especially look forward to when Jagged-X introduces a new machine. The new 1919 is a piece of off-road art we think everyone will enjoy. 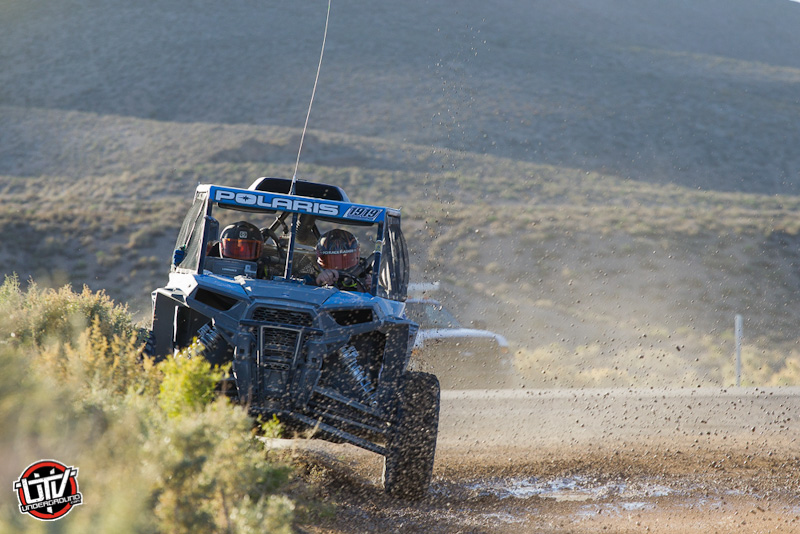