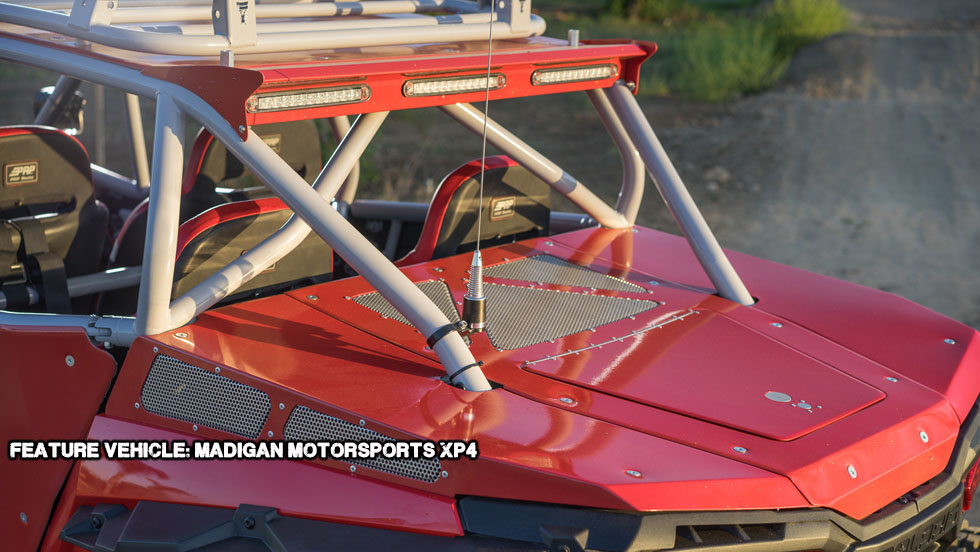 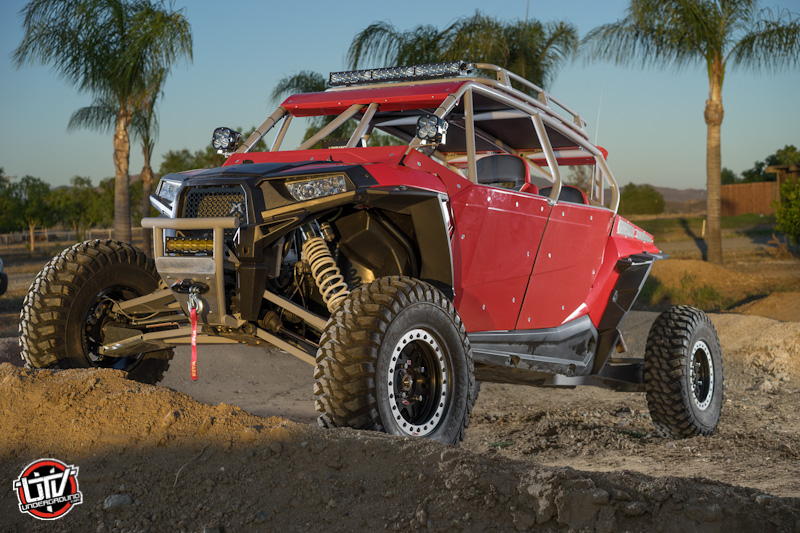 Cody Waggoner’s Madigan Motorsports’ built “Pre-Runner Edition” RZR is drawing lots of attention because of its clean design and and build out which was all done by Madigan Motorsports. “This car pretty much got every aftermarket part that Madigan makes,” Tom Madigan explained, “And Cody’s car didn’t start out as this grand ‘going to have everything’ project – it came in for a cage.”

The build grew quickly when Cody, whose business Lasernut.com is 80% after-market off-road cutting services, handed products back to Tom after cutting the brand new parts and designs. “As Cody’s build was going I was developing parts for other cars,” Tom says, “and he would see them and go, ‘I want that.’ Eventually he said hey make it with every badass part that you make – I want the baddest RZR I can get.” Last year, Cody and his dad raced RZR’s in King and Cody set-out looking for a great suspension and bigger tires to race the desert, funnel the rock sections, and take the thing out the Valle for jumps at higher speeds, to get in as much pre-running as possible.

People mostly notice the effect of the wide stance from the 32” tires, and a lot of racers gave the Pre-Runner edition a volume of attention– guys that race trophy-trucks and long cars, saying “If I bought a RZR- that’s what it would look like.” Tom Madigan said “ It’s cool hearing that from big time race guys. We called it ‘The Pre-Runner edition’ because that’s what I tried to base it around. I try to build around a desert type pre-runner style vehicle, it came along with our suspension layout and design and spindles, thinking like it was a 10-car has evolved our building process of the whole car, so when we design these parts we don’t think ‘it’s going on a UTV’ we’re thinking it’s a race part and we have people running them and testing them so we keep improving them and coming out with more stuff to make them stronger, find the next weak-link and design for that. Pretty soon they’re going to be ten-cars with RZR motors, when we’re done with them.” 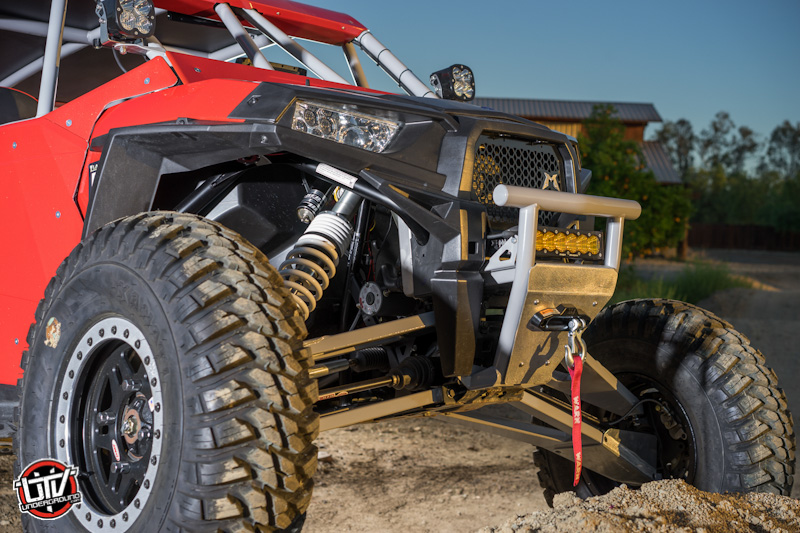 Cody comes from a racing background but since it will never hit a pro class racetrack, (if anything it would be a sportsman), Madigan insisted on a front bulkhead instead of the race-legal, because the bulkhead kit by far is the strongest kit. “That’s what I designed it for the first time, to be the strongest. It just doesn’t fall under race-legal rules. So any chance I get I push the bulkhead kit” Tom said. The bulkhead moves the upper part of the rear arm forward, so it eliminates that bend up and over the tie-rod, so therefore gets rid of that weak-link when you stuff the car, and the second is you add that bulkhead that bridges the factory chassis and that strengthens the front of the car. “That tends to be the biggest problem with the factory suspension is that they land all of the weight on one tire, like a nose-dive, and it just buckles that front-arm right where the bend is, so that’s why I designed the bulkhead and I didn’t think it would be a race kit I just thought, ‘I’m going to make it the strongest, most affordable kit I can make.’ And I did, I came out with a 4130 bulkhead kit and not too many other builders liked that. The only time a customer gets a race kit is if they intentionally plan on running it in a racing series.”

This car is also one of the few vehicles to include Madigan’s skid plate package, which gives the vehicle a good look along the car and protects its arms. Tom knows that Cody races an Ultra 4 Rock Crawler and the Pre-Runner Edition RZR is going to be with him at a lot of these events. “You know he’s going to be playing up in the rocks because that’s who he is. The skid plates are going to protect the arms when he’s sliding up over the rocks. Then when it gets wasted he buys a new set of skid plates and it looks like new.” 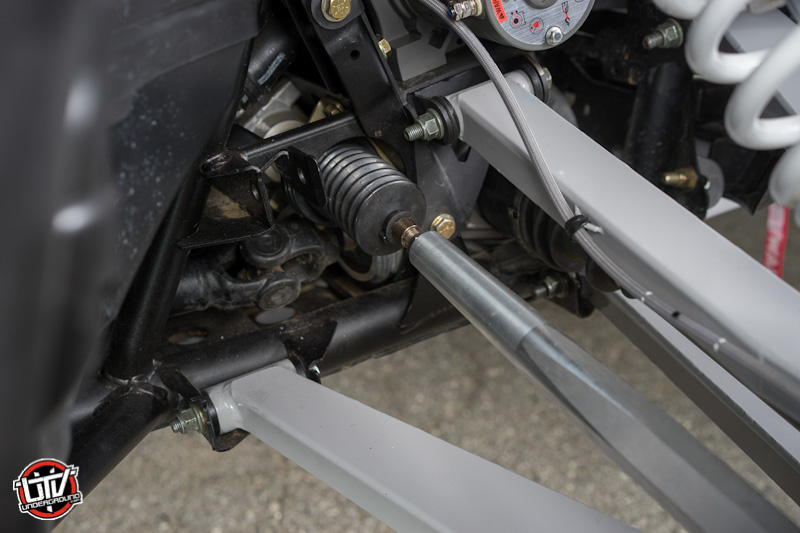 There is also a pretty cool and unique set-up where the car can run with or without a windshield, which Cody likes a lot for when he’s taking out his family, and when it does run without the windshield, the design utilizes “hidden” tabs in the visors and uses lower valance zeuses and no one could tell it ever had a windshield in the first place.

Cody’s favorite part of the car, and Madigan’s most challenging, was the custom switch-panel.
“Cody was dead-set on the switch panel and I didn’t want to do it,” Tom said. “I didn’t know how this was going to look or how I was going to get the wires down, but he’s an Off-Road guy so running the wires on the outside of the tube was no problem. It ended up looking really clean.” Cody is stoked for the cool dash gauges, and with every single switch for the car overhead – about twenty switch – it’s easy to feel like he’s commanding a jet fighter plane.
“I think that happens every build!” Tom said. “I don’t think I’m going to like it then it turns out cool.”

The lightbar is mounted into the roof rack, a 30” Baja Designs ON-X with a 10” amber  ON-X on the front bumper. The rack on top is great for storing tools, ice-chest, first-aid kits and camping supplies, making it possible to do an overnight trip. Madigan is always a fan of Baja Designs, saying “you can’t get any better.” “The quality and craftsmanship of the Baja Designs light… you definitely get what you pay for, for sure.” 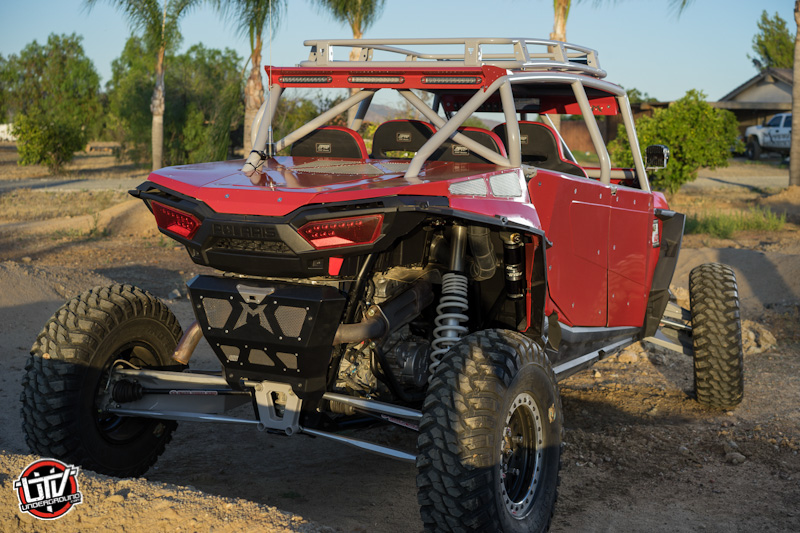 “Favorite part about the car? I guess everything. It’s all rounded it turned out great with the suspension, it’s going to perform well, and the Machine Metal Works is really nice.” Cody says.

“What’s my favorite part about the car?” We asked Madigan. “The whole damn thing, I wish it was mine. I keep saying that about each car because each car keeps getting these new, unique things. It’s like I’m building my dream car and then I get sad when they leave on the trailer. Simple, clean, and look at how much badass shit is on it. We’re not hiding our work underneath a wrap. And we use 100% DOM tubing in our cages- there’s no partial mild steel to save money, it’s 100% quality material – You’ve got your families in there- it has to be.” 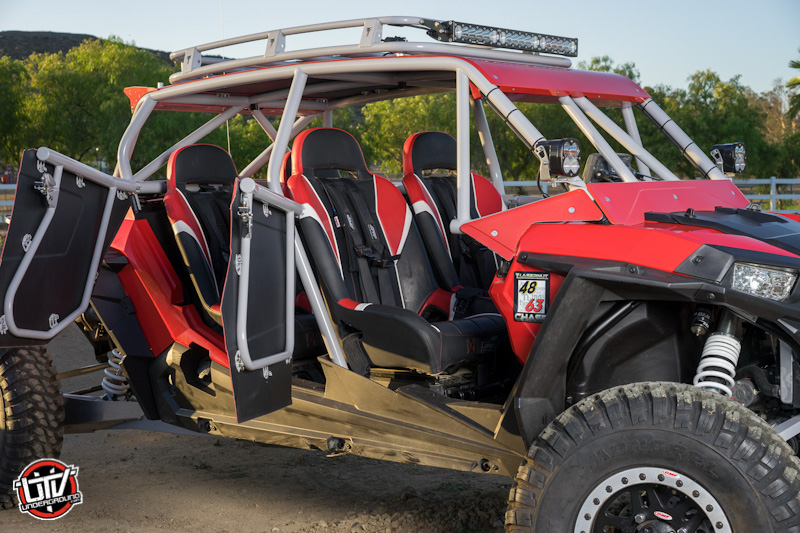 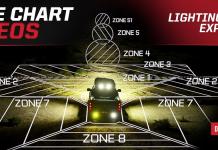