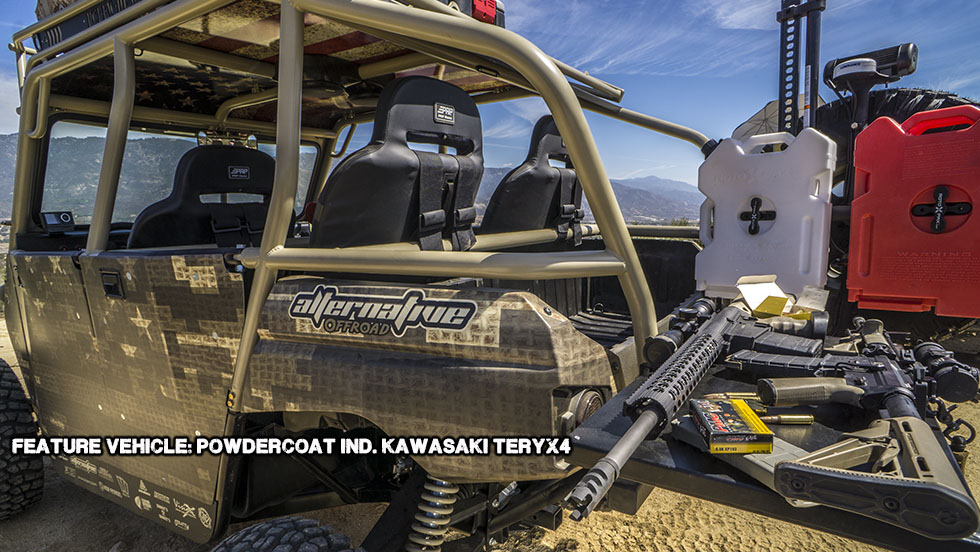 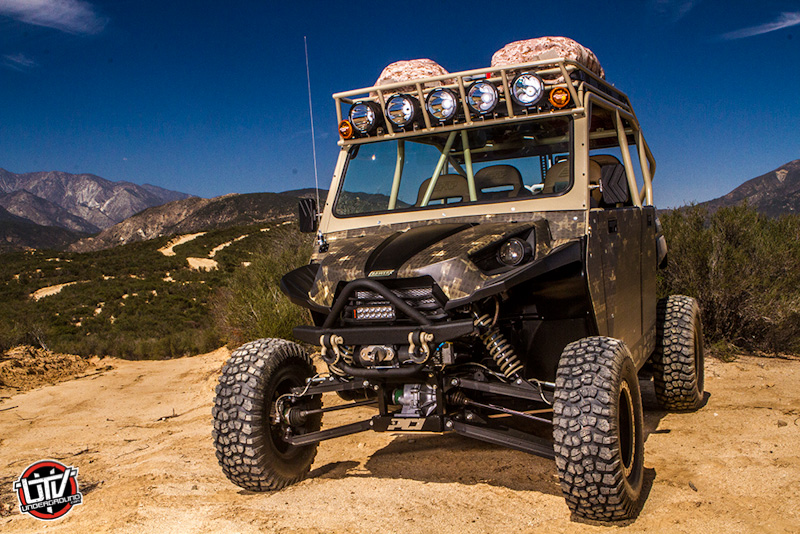 Like most of my builds, I started with passion, not only for the sport I love but for building the most functional equipment that suits my needs. Much like a tool that’s used for a specific job, this build had a purpose and the right tool started as a Kawasaki Teryx 4.

Many years ago my son and I had started a yearly tradition that would lead up to our current build. Back in 2010 we did our first UTV excursion together. Having been riding all my life and being around my toy hauler or motor home, I wasn’t sure how a “rough it” trip would pan out but I figured it would be worth a try. 2010 was the first year for our Father / Son UTV trip and I still had my 2006 Yamaha Rhino at the time. This was a Rhino I had just completed building, but was more of a sport build designed for more desert and dune riding. Although the Rhino is and will always be a great durable platform for expedition type riding my original build was not geared towards it so we made do on our first trip. After completing this first adventure and traveling approx. 350 miles and spending 4 nights on the trail, I was hooked and could not get this epic trip out of my head; I wanted more!

I had too much money and time wrapped up in the Rhino to justify converting it so prior to our second annual Father / Son trip, I started looking for another UTV for my next build that would be geared more towards expedition type rides. Not being a Polaris fan, back in 2011 there were few options that made sense to me, so I ended up buying another Rhino. The reason for this route was simple; I had owned several, they were extremely durable and knew they would always get me back; so I started to build my first expedition Yamaha Rhino. When building this Rhino I took everything I had leaned the year prior and created a functional machine that I could back pack out of and would always get me home.

For the next several years I ran this machine for all excursion type rides and it never once let me down. Then in 2013 I was in Kauai HI and took a SXS tour. This was the first time I set foot in a Kawasaki Teryx. After this tour I was hooked and knew this was the vehicle for my next build. Not because it was fast, or because it was the next best thing, but because it felt like a tank, the Kawasaki Teryx 4 is unmatched by any machine IMO. Its rigid chassis and v-twin 800 made for the perfect platform for my next expedition build, and so it started…

In late 2014 my company and team at Powder Coat Industries contacted a few of our good friends. I started with James at Alternative Off-road and pitched the idea of a new build I had in mind. Unlike the Busa car which was a complete sport build this one would be the ultimate expedition/luxury/crawler/back packer. Most SXS enthusiast have never tried this type of riding, so although to some it was unknown as to how popular a build like this would be, Alternative jumped on board as major sponsor on the build. 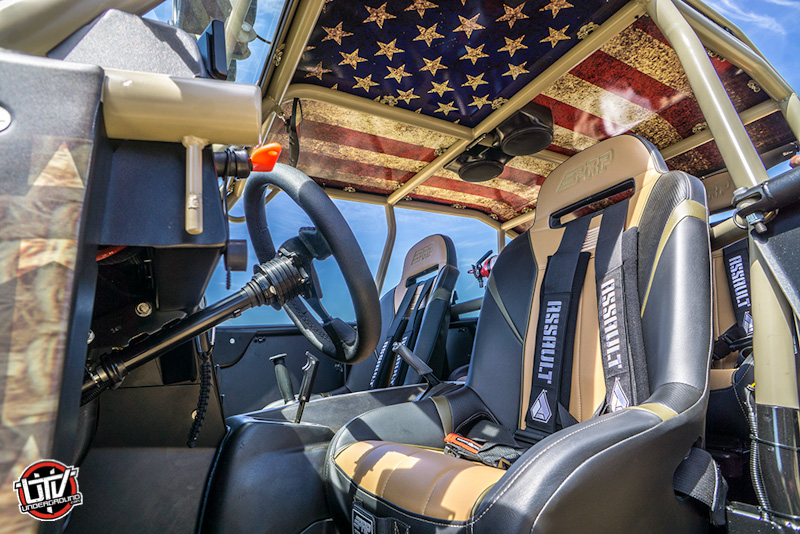 Because of my busy work schedule, I approached another good friend; Thad at Fabwerx. He immediately jumped on board and was all-in on this new team build. He was extremely enthusiastic, as was I, and together we knew this could very well be the sickest Teryx ever build; so the fabrication began. At this point in time I had no idea that so many who had seen some of my other builds would want to get involved; but in fact was surprised when so many respected names in the industry wanted in as well.

The concept was an ultimate luxury, backpacker that would have all the amenities from comfort to recovery. Because of the Kawi’s durability, we are certain that no other platform could have been outfitted like the Teryx to fit this purpose, so weight was not a huge factor in this build. There were basic wants for this build based on previous experiences.

I knew I wanted a swinging tire carrier; this was important for easy access to my jack and Rotopax fuel & water carrier. This would allow all that stuff you don’t use often to swing out of the way for easy bed access. We needed and wanted plenty of roof space to carry 3-5 days of gear for multiple people so we built a roof rack. We needed plenty of lighting and thanks to Vision X the car is outfitted with 20 lights providing 360 degrees of lighting as well as cab and rock lights. And we knew that on board air and a winch were a must just in case we popped a tire, needed to blow up an air mattress, or needed to climb our way out of a hole. These were the basic wants, but when we added the GPS and figured out we didn’t have room for 11 switches on the stock dash, the build went to another level.

For comfort we started with:

Safety was a big part of our build so we went with:

For performance we outfitted the car with:

– 5+ HCR long travel kit
– Vforce John clutch, programmer and a muzzy exhaust
– Full UHMW skid by Stuntman Off-road
– 20 lights from the guys at vision x giving us not only drive and dust lights, but the ability to light 360 degrees of desert and the ground around the car.
– All the lights switched by the guys at OTRATTW who provided one off custom switches for the build
– Dual oddesy 925’s
– All wired by Alternative off-road 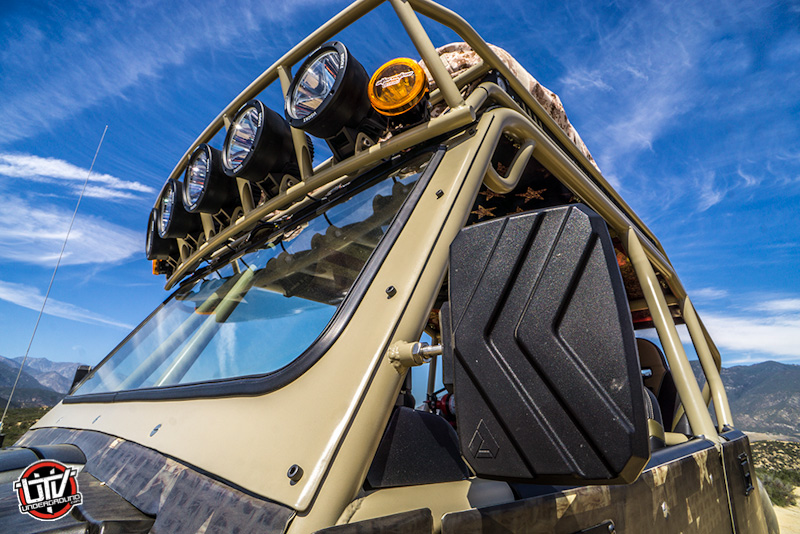 And let’s not forget recovery where we outfitted the car with:

All this makes this Kawasaki Teryx the ultimate expedition SXS!!