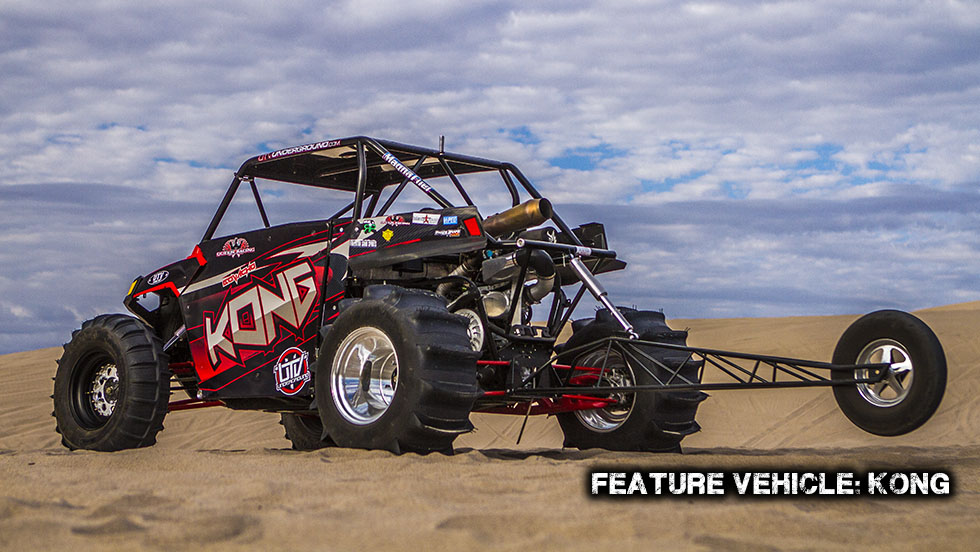 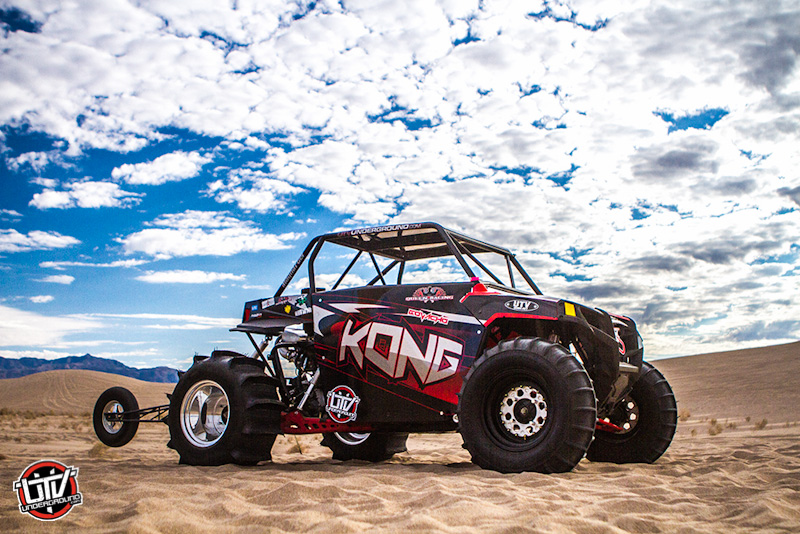 We first met Bart Chielens AKA Govacho back in 2012. Bart is a long time member on UTVUnderground.com and actually purchased the Stormtropper RZR I had built to use it as a play car. We have since kept in close contact and done a few rides together. During this period of meeting and getting to know Bart, he had his 2 seat 2013 RZR Xp900 at Queen Racing for a build that almost seemed top secret. Everytime I would talk to Bart he would be like “wait till you see my RZR at Queen Racing….” and everytime I would think, this guy is never going to get that thing done! Well, not only did he get it done, he killed it with one of the sickest looking and fastest RZR drag machines we have ever laid eyes on. Bart and Queen took the RZR XP900 to the frame, swapped the engine our for an Arctic Cat Z1 snowmobile motor, popped on a big turbo, and fully tubed the chassis to make it light and safe. They then moved the seat position to the center, added on a few more go-fast parts and let’r rip!

After getting the chance to see it run at SXS Wars in Dumont, we thought we would feature for everyone else to geek out on!

We hooked up with Bart to talk to him about the machine he calls KONG!

JD – What made you want to build a Drag Race UTV?
BC – It started out as just wanting to have a 350hp SXS that I could play with. You know, it had to be the fastest out there. Then I found out about 300ft drag racing and thought well there it is, I now have a place to “GO FAST” so SXS drag it is, and hell there where none out there or at least here on the West Coast.

JD – So you took Shoeless Joe Jackson’s advice “If you build it, they will come”? lol
BC – I don’t know any Shoeless guys but I really thought I could bring this type of racing to light. I mean, all the big bad-ass SXSs are all built here and then shipped over seas to Dubai and Qatar, none really stay here. We all see them on YouTube, but not here in our dunes. When I took Kong to Oregon DuneFest in 2014 it was my hope that I could build some hype for the sport of SXS drag racing. I mean we have the builders who have there shop cars like K&T Performance, API, OSP and such, but you never saw a run of the mill UTV owner with a beast out there!

JD – Come-on? You never saw Field Of Dreams with Kevin Costner? The baseball movie?? lol Anyway, so you decide to build a 350hp RZR to no go really fast, I mean really fast! How fast will it go?
BC – I talked with Mark Queen of Queen Racing during the the year of building this car and we made changes like three times. Each time bigger and faster. So we have a SXS built for 350hp and we are now pushing about 479hp out of it. As for how fast is it, NOT FAST ENOUGH! And I did see the movie… I just thought that was a good comeback. haha 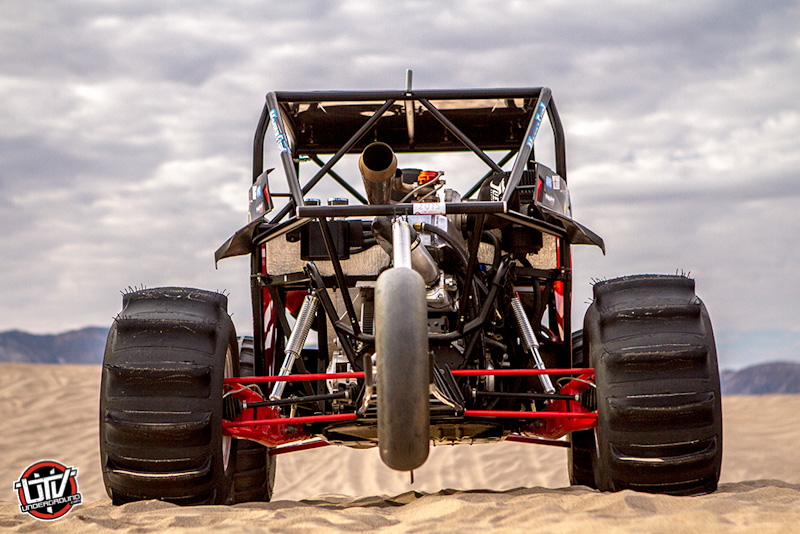 JD – Dude, how fast does it go? You know thats what we all want to know!
BC – Not fast enough. After SXS wars in Dumont I knew we needed to bring Kong back in for some much needed loving from Mark Queen at Queen racing. Look, the top cars out there were well over 100mph up at the top of a 650ft hill. So again we were not fast enough. But we will break the 100mph bubble. But again, Kong was built and set up for 300ft racing not 650ft. I made the adjustments that I could with the help of Dave Kuskie of Fullerton Sand Sports, Mark from STM and Ryace Muchmore from K&T and did a good non factory/team supported run with the big dogs.

JD – Dude, 100mph in 650ft is extremely fast in a UTV! Do you see this sport of UTV Drag Racing taking off?
BC – Well if you look at the Dumont SXS Wars this year and compare it to the DuneFest 2014 drag race I would have to say HELL YES!!.. I mean at Dune Fest there was maybe 3 or 4 fully built SXS and 2 or 3 with bolt on power adder stuff. Now ahead to SXS Wars there was about 5 to 8 fully built SXS and about 10 to 20 with bolt on stuff. I think as the year goes on and with the new signed contract with San Bernadino County fair grounds in Victorville with there 5 events and TV support we can only grow. So yes, we have taken off already.

JD – That is awesome! Its really exciting for me personally to see more UTV racing take off as you know how involved we are in promoting competition in this sport! So back to the build, I have the full breakdown of engine parts from Mark Queen so no need to break all that down, but what all is into this build in terms of parts and design? I guess what I want to know is, besides its big engine and wheelie bar, what makes it a drag racer?
BC – Suspension with Marvin Shaw shocks, custom made 3 gallon fuel cell, center drive seat position, and lots and lots of weight shaved off the SXS. All along with a fully enclosed chromoly roll cage. KEY WORD FULL CAGE. But with that said, I learned a lot at the last event and will have some new transmission stuff taking place and a few more items I cant talk about yet going into Kong!…..Oh and one sexxy ass beast of a man, ME driving it…lol…

JD – haha I would say, you are pretty sexy! lol So seriously, how do they wedge you into that RZR?
BC – Actually I do have a door on it! lol

JD – Thats awesome.. Thanks for taking the time and letting us show off KONG! Its one bad machine. One last question, would it be possible for me to take it for a pull down the sand drags one day? I mean, you know how I get down behind the wheel!
BC – Buddy, I don’t know if you could handle Kong… But I think we could work something out for a demo ride…lol….

If you or your company are interested in supporting this awesome new program please reach out to Bart Chielens by email at [email protected] Bart is actively seeking sponsorship for KONG to compete at various organized events. 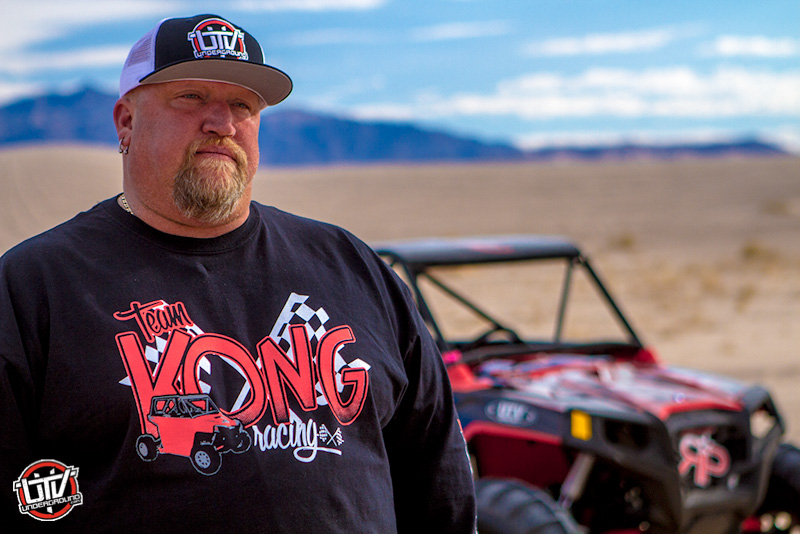