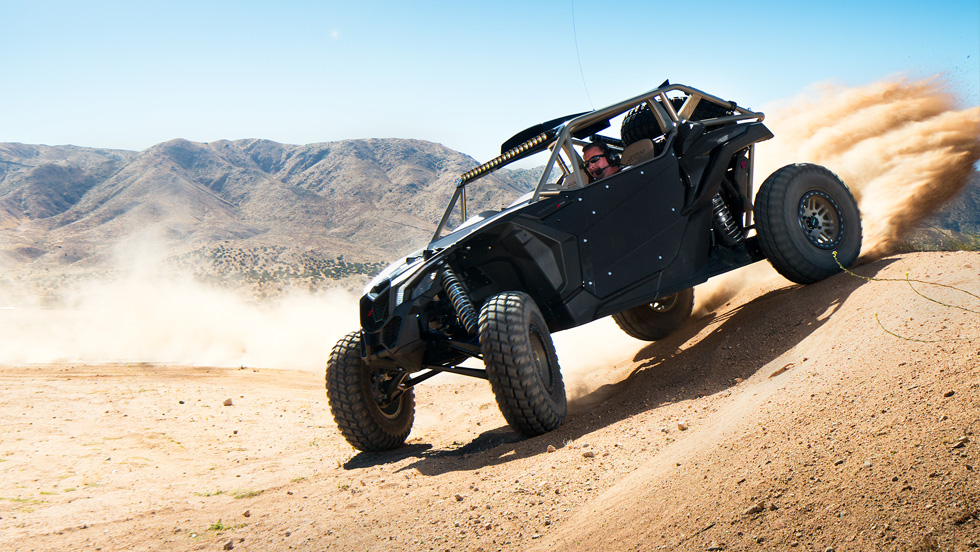 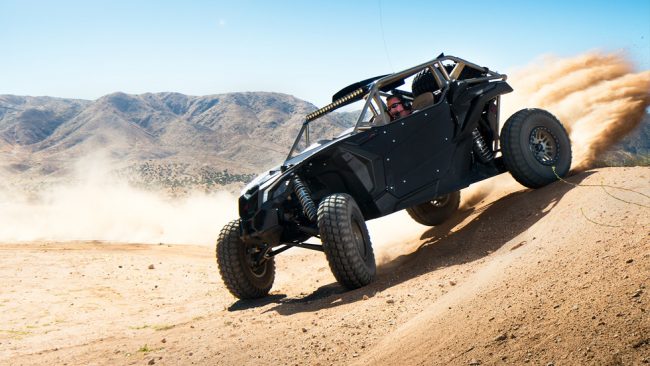 Hailing from the high desert of Hesperia, Ca. Rob Lindsay of RJ Fabrication has been building some of the most unique machines in the automotive arena from SEMA show stoppers to off road trucks. When Rob got his hands on the new 2017 Can-Am Maverick x3 Turbo-R his experience and aptitude got his mind flowing with ideas to build a one of a kind Maverick X3, the UTV world was not ready for. 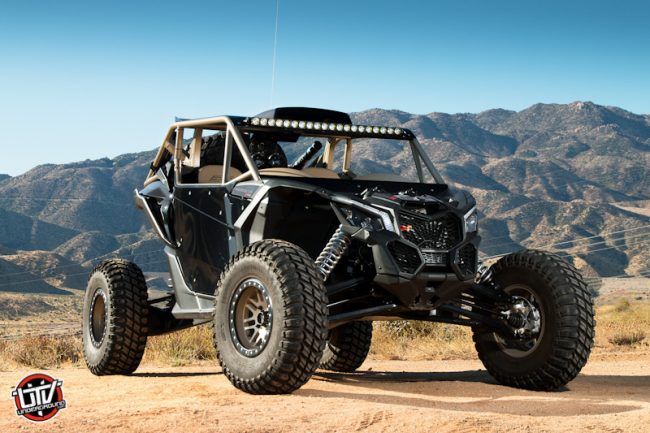 Rob started with a bone stock 2017 Can-Am Maverick x3 and started first with designing a roll cage for it. Having experience in building trophy trucks, Rob wanted to bring in design aspects from trophy truck cages into the build of his X3. Rob opted for 1 3/4” chromoly tubing for safety and added in a trophy truck style rear upper shock mount to the cage which to this point hasn’t been done before on an X3. Once it got time to build the doors Rob took some of his experience from drag racing and added in a custom double sheer striker door latch system to the door to add rigidity and ease of use. Robs notching design allows the doors to close easily each time unlike many doors on the market where you have to “jimmy” the doors close.

Brandon at RJ Fabrication would fabricate the aluminum roof and rear wing of the X3; however, Rob wanted to add something that many UTVs don’t have, a functional aluminum roof scoop. The roll cage, door bars and wheels were powder coated dark titanium by Young Gun powder coating which gave the build an aggressive yet exquisite color scheme. The aluminum was coated to match the factory black plastics. 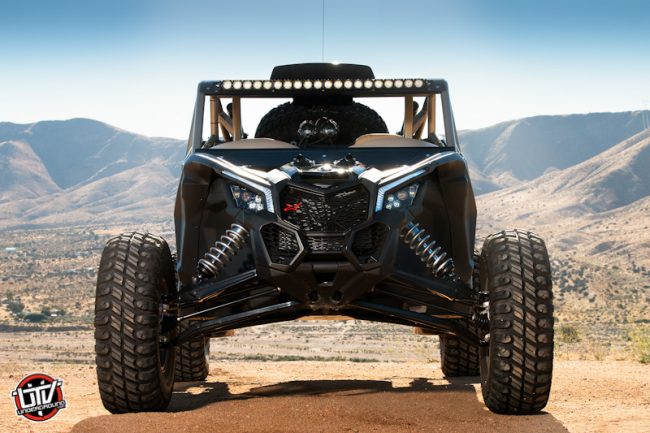 For the interior of the Can-Am Rob called on the crew at PRP seats for a beautiful tan and black two tone seating with contrast stitching. Next Rob asked PRP something they don’t get asked quite often, a large piece of the same vinyl that was used for the seat, PRP did not know what Robs intentions were with the material but they would be in for a surprise. With the extra material Rob acquired from PRP, Rob built a custom hand formed aluminum dash and had Jose at Upholstery Plus wrap the dash and add contrast stitching and black piping that would rival some of the nations top luxury pre runner dashes. The combination of an upholstered dash and all components recessed in gave the X3 the high-end appearance Rob was after. The addition of a Switch-Pro’s control panel was added along side a Rugged Radios RRP660 intercom & race radio unit and Lowrance GPS.

The stock shocks had some changes made to to them with the addition of Shock Therapy springs giving the factory FOX shocks even better performance. Rob then made a front shock tower brace for the X3 to help with strengthening this area of the front suspension. Assault Industries rear radius rods were also added to beef up the X3’s already capable factory rear suspension. 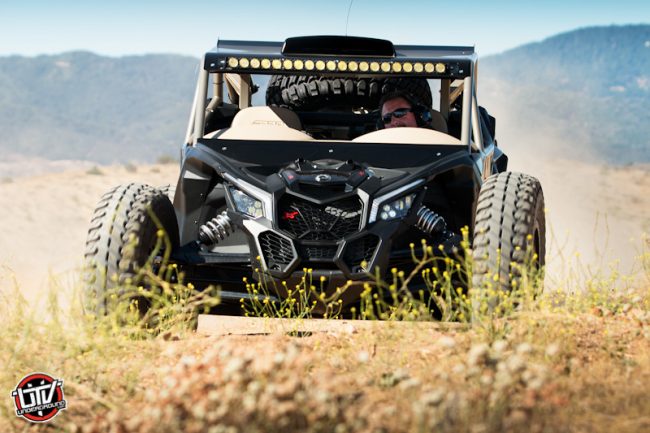 The power gets to the ground with the assistance of 15″ Method Race Wheels wrapped in 32” STI Chicane rubber. Its a reliable and durable combination for hardcore desert riding and gives the X3 the stance it needs. Anything under 32″ of tire height just doesn’t look right on the new X3. Should they ever face a flat, RJ Fab built a spare tire mount in the rear with a custom bracket below it with a jack & breaker bar.

A 40” KC Hi-Lites LED light bar was added for night rides and was mounted perfectly inline with the front visor of the roof line. The sleekness of the light bar combined with its placement helps maintain the clean look of the build.

As Rob neared completion of the build he loved everything but when he sat behind the wheel something did not feel right, the pedals seemed unorthodox with their positioning towards the right. Anyone who races or drives with a two-foot style have recognized the pedal positioning of the X3 and how that can make it difficult to drive with such a style. Rob came up with a way to relocate the pedals 3” towards the center of the floor board. Now you can two-foot the hell out of this machine in comfort! 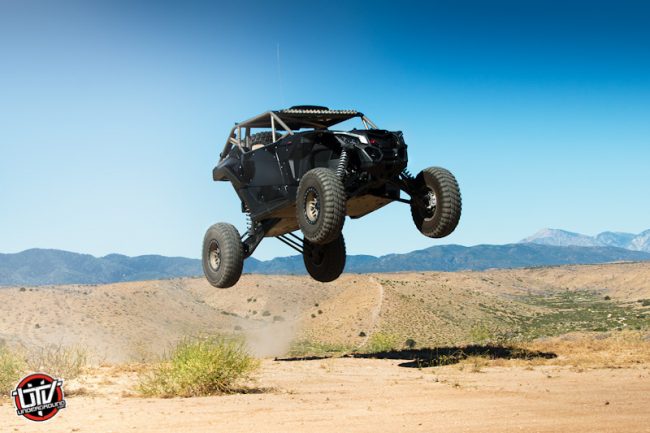 After gawking over the craftsmanship Rob and his crew at RJ Fabrication did on the Can-Am X3 it was time to take it out for a ride. Behind the RJ Fabrication facilities is a dirt playground with jumps, whoops and trails to ride with the gorgeous mountain range in the distance. 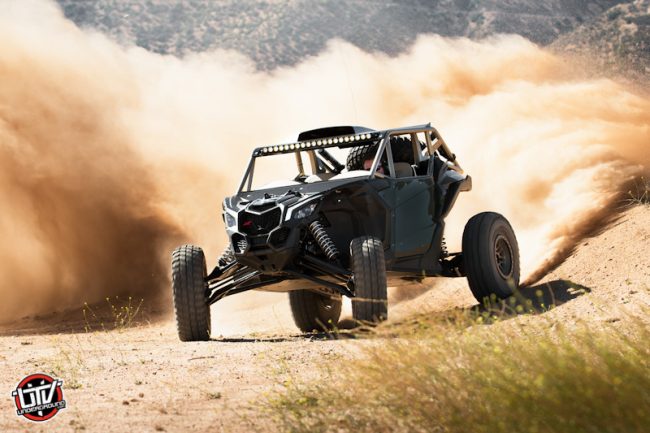 The Can-Am with only small modifications to the suspension handled jumps and whoops at over 60mph with ease and stability. The turbo threw us back into the PRP seats and we topped it out at 87mph down the straights. With Pandora blasting through our Rugged Radio head sets we set out on catching some air off a jump that Rob knew of. We sent it off the jump and I braced for a landing which I thought might be rough but the Shock Therapy springs and Fox shocks soaked up the landing with ease. This beautiful machine that Rob at RJ Fabrication built we feel is an all around total package with the reliability to go shred some trails and look good doing so.

UTVUnderground.com would like to thank Rob Lindsay and everyone at RJ Fabrication for their hospitality and giving us an exclusive look into what we believe is the ultimate Can-Am Maverick X3! 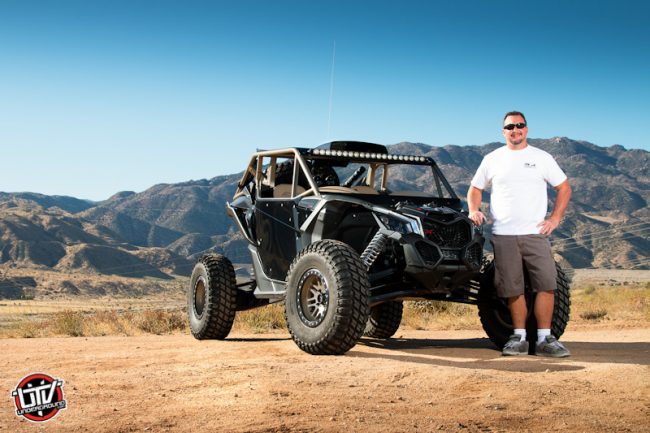 If you would like to keep up with RJ Fabrications latest builds you can follow them on their social media at
https://www.instagram.com/robrjfab/
https://www.facebook.com/RJ-Fabrication-192227454138224/
http://www.rjfabrication.net/